GKD Metal Fabrics: A New Facade for the Home of the Cougars

When Salina South decided it was time to undergo renovations and updates to its campus, the school board called upon integrated design firm DLR Group® to head the project. The project included two major classroom wings, an auxiliary gymnasium and an improved main entrance to the school. Through partnerships on previous high school projects, DLR Group knew GKD Metal Fabrics could create the ideal solution for the project, in the form of a facade. 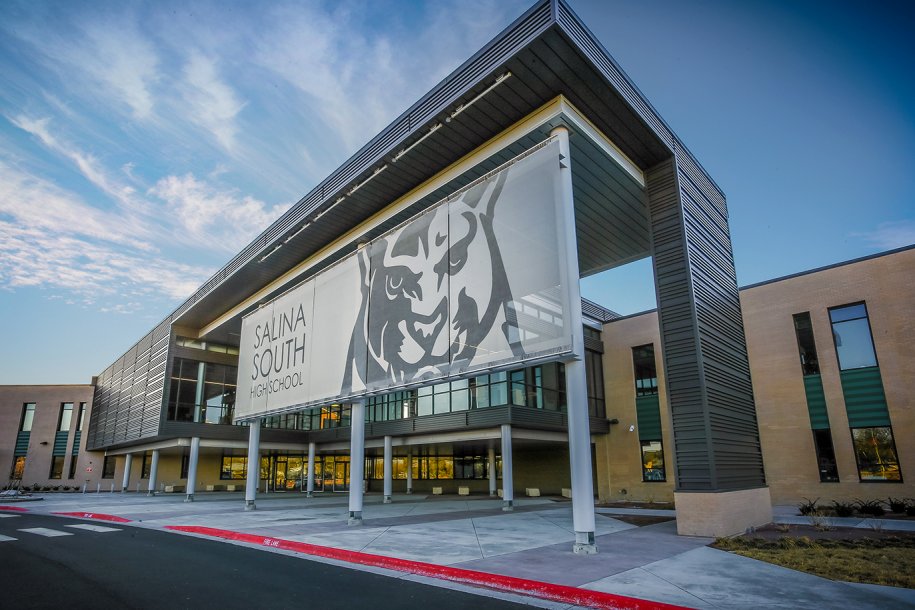 Salina South High School sits on the southern side of Salina, Kansas. Home of the Cougars, Salina South educates approximately 1,162 students in grades 9-12 each year. Since its establishment in 1971, the school has received significant achievements in academic and athletics.

The school is organized into two main learning environments – one centered on humanities and the other focused on STEM education. A commons area and media center links these two environments together.

In 2017, Salina South decided it was time to undergo renovations and updates to its campus. The school board called upon integrated design firm DLR Group® to head the project, which included two major classroom wings, an auxiliary gymnasium and an improved main entrance to the school.

When designing the improved main entrance, DLR Group wanted to preserve the open courtyard situated in the front of the school. The idea was to implement transparent signage that would allow the school to showcase its brand, without closing off the courtyard on the outside. Through partnership on previous high school projects, DLR Group knew GKD Metal Fabrics could create the ideal solution in the form of a facade.

“We worked with DLR Group on high school projects before, and the results have been fantastic,” said Jeff Abbott, Customer Service Manager at GKD Metal Fabrics. “They came back to us for Salina South because our fabrics would be a perfect fit for etched graphics, which DLR Group was spec-ing for the new design.”

With a relationship built on the foundation of successful projects, GKD went to the drawing board for DLR Group. Communication was frequent during the initial design and concept development process. Through frequent correspondence and a series of sketches, DLR Group and GKD landed on yet another etched façade design that would breathe new life into a school.

“GKD holds a long working relationship with DLR Group on many different types of projects, and the results have always been positive, said Abbott. “Not only with the engineering of the finished product, but with the relationship and communication all the way from concept to installation.” 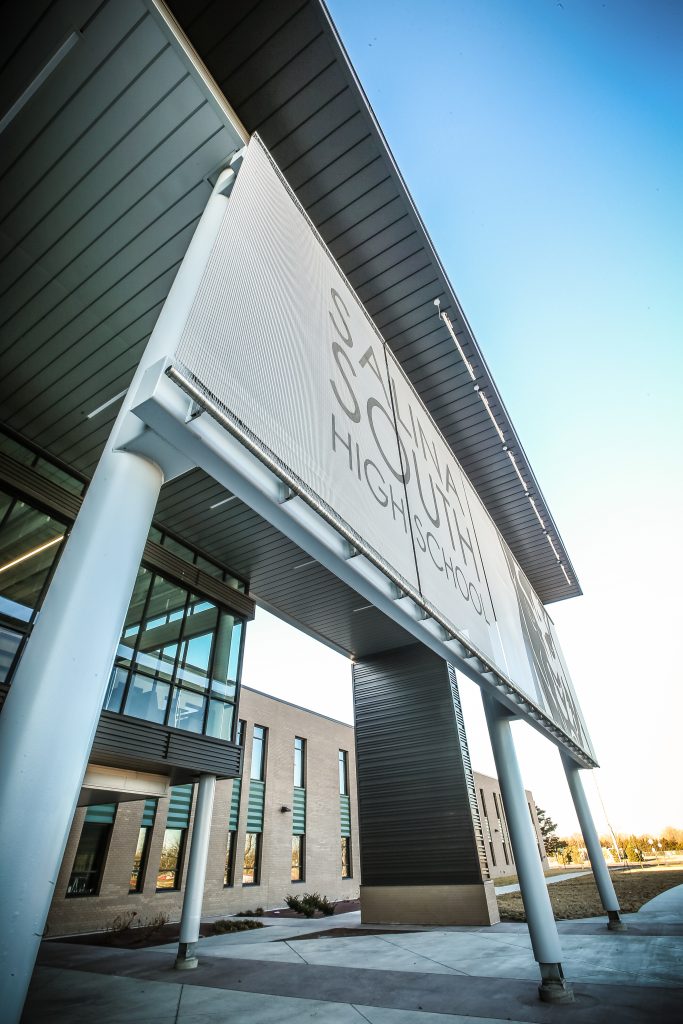 To achieve striking branding with thoughtful transparency, DLR Group and GKD Metal Fabrics chose Omega 1510 metal fabric for the façade. A durable but flexible fabric, Omega 1510 is known for its superior sun-shading ability, increased protection from the elements and sheer aesthetic. These reasons are why Omega 1510 is often the fabric of choice for high school projects.

Omega 1510 is also one GKD’s main metal fabrics for etched graphics. Using the fabric’s flat design, GKD etches graphics onto the metal mesh to create a highly contrasted image that, in this case, brought a cougar to life.

“The beauty of our etching is that it remains maintenance-free throughout its life,” said Abbott. “Over time, in most situations, the graphics will enhance.”

GKD’s etched graphics experience no deterioration. This can be a significant consideration for schools, which often operate under tight budgets and many times do not have the ability for continued maintenance on aesthetic improvements.

In total, the façade measures 15’ tall x 54’ wide and is broken up into five separate panels. Although laid out in five separate pieces, the etched graphics flow seamlessly throughout the façade, providing the impression of one singular piece.

“If you have an area that you want to maintain transparency while providing branding for your school or any other project, this is a great way to go about it,” said Abbott. “In reality, it can outlast the building that it’s attached to.”

A roaring, 15-foot-tall cougar now greets the students of Salina South High School when they arrive for the day. Over the years, Salina South has developed a reputation of prolonged academic and athletic success. A reputation that current and former students take pride in, Cougar pride. Now, the school has a face that matches the bold, transformative education occurring inside and honors the success of Salina South. 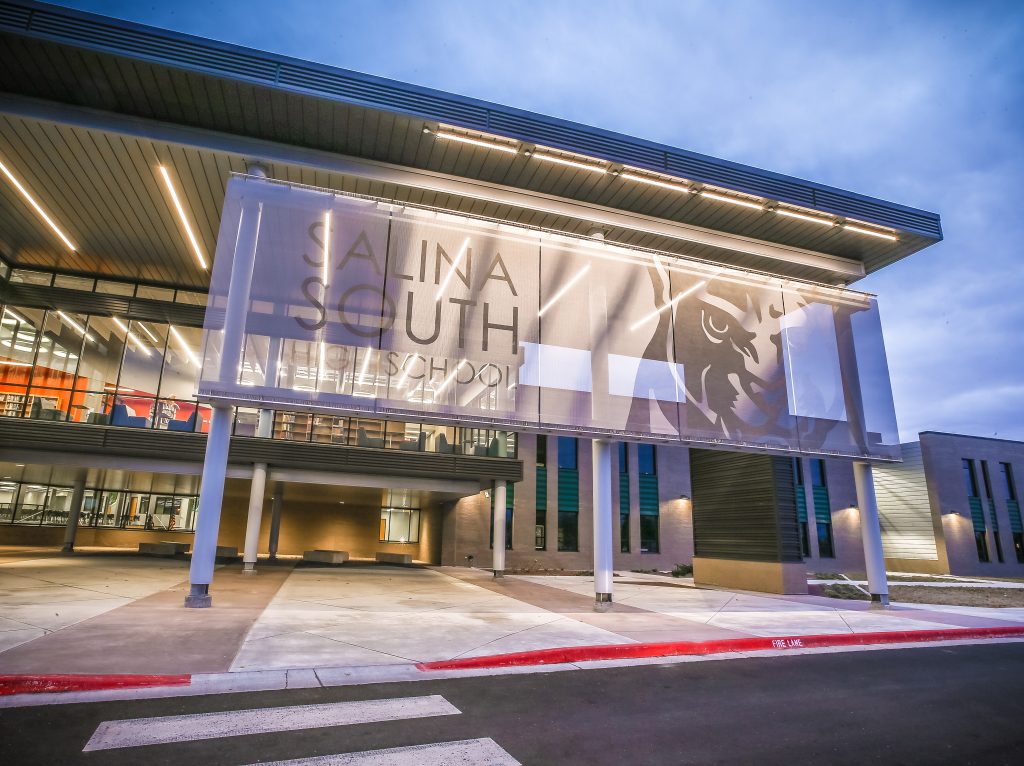