Science as inspiration for designers and MAPEI alike 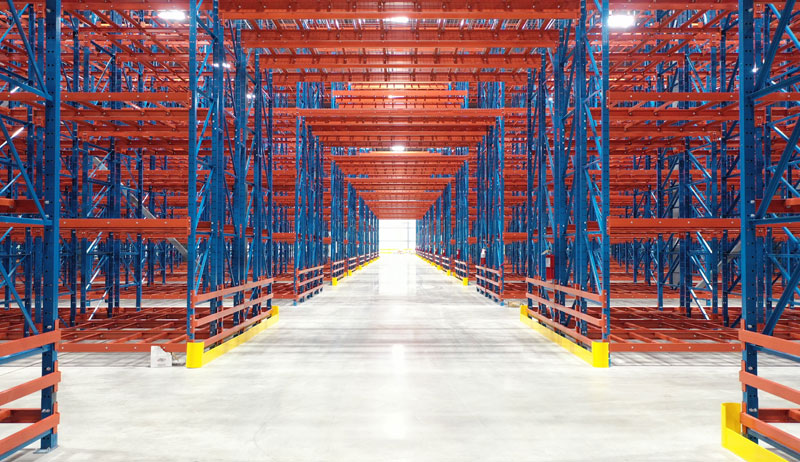 Designers are always looking for inspiration. In his public piece Ondes croisées, which was created for the new Université de Montréal MIL campus, artist Alain Paiement found inspiration from the world of science – just like the technologically advanced setting materials from MAPEI that helped bring the artwork to fruition.

The university describes the completed work like so: “On the patio floor of the aperture formed to provide the air intake supplying the laboratories of the Science Complex, two large waves formed by tiles coloured in shades of red and blue intersect. They represent a phenomenon related to several scientific disciplines. The intersecting of the waves also refers to the meeting of the neighborhoods of Park Extension and Outremont, now linked by the MIL campus.”

Working closely with collaborator Lucie Robert, Paiement came up with a unique concept that won over the prestigious university’s committee and awarded him the work. And for the first time in Paiement’s life, the sexagenarian’s art was created using ceramic tile in an exterior environment that was exposed to the elements.

“The choice to use ceramic was mine,” Paiement explained. Given the architectural specifications (no glass, for example), Paiement and Robert decided early in the creative process to use ceramic tile.

“I love it. Ceramic mosaics are very modern, yet they also have an incredible history in art,” Paiement said. 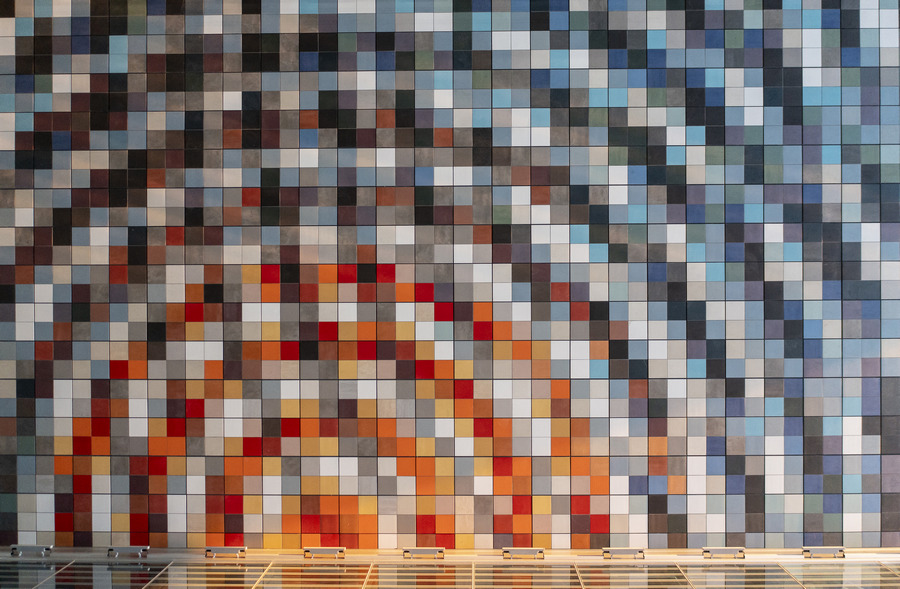 The full story behind the concept of the Ondes croisées design begins over 100 years ago, when Montreal was Canada’s biggest metropolis and economic engine.

In 1910, the land where the Université de Montréal MIL campus now sits was purposed as the Canadian Pacific Railway’s marshalling yard. This area served for three-quarters of a century as the Montreal island’s central industrial-transport hub, connecting the manufacturing and textile sectors in the working-class Mile End and Park Extension neighbourhoods to markets across the country.

In 2006, with the old railyard now sitting idle for over 20 years, the Université de Montréal took ownership of the land. University officials had the vision of transforming the land into a new, ultra modern campus for the university’s growing pure-sciences and health-sciences disciplines.

The transformation would not be quick or easy. Once the land was decontaminated and a new roadway was completed, the new campus only partially opened in 2019, with work continuing to this day. 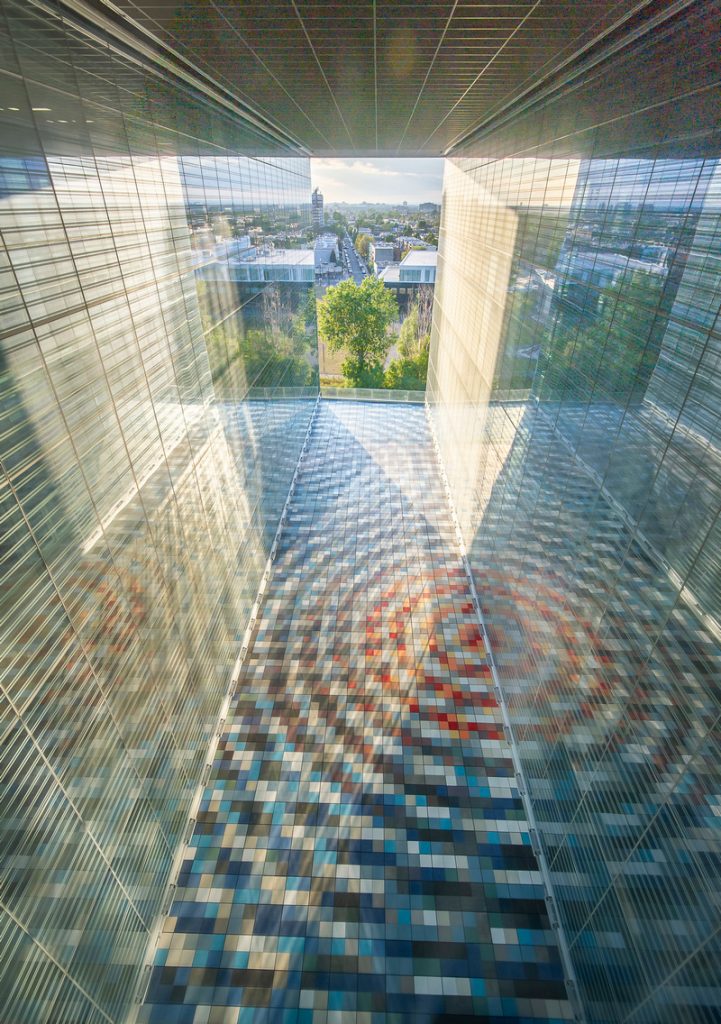 While the overall project is expansive, Paiement’s contribution was focused. The artwork was put together over a 7,000-square-foot (650-m2) exterior flat surface that is conceptualized by a multicoloured ceramic-tile pattern that was precisely set.

“The precision-coloured tiles are all 12″ [30 cm] square and, being exposed to the rain and freeze/thaw conditions, it was important to have a mortar and grout solution that would stand up to the weather, as well as the test of time,” said MAPEI sales representative François Croteau, who served as MAPEI’s representative on the project.

“The substrate for the tiles consists of dozens of 24″ (61 cm) square concrete slabs sitting on bases atop a roofing membrane,” Croteau said. “Each slab had to be tiled individually, with four correctly coloured tiles placed accordingly.” 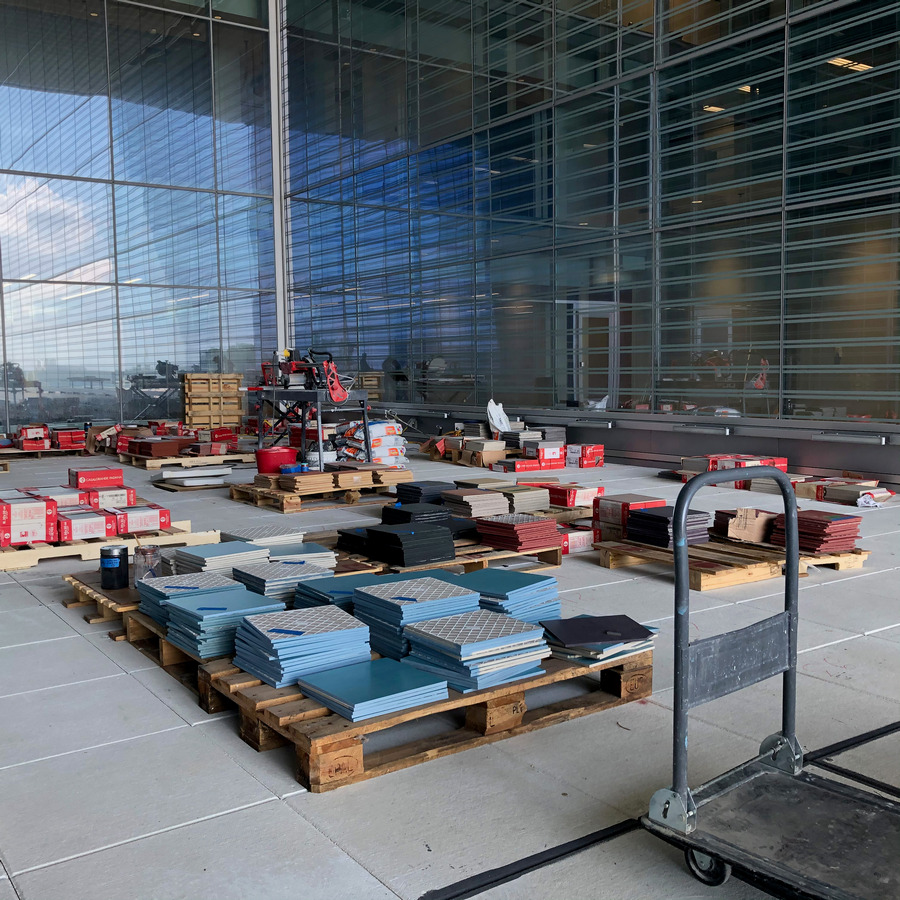 Paiement was impressed with the results that the installers from Carreaux Cera Design were able to get using MAPEI products.

“I think they were pretty good at following directions. To be as reliable as possible, we placed the tiles, as we provided them to the tiler, tile by tile, row by row…Also, we had to cut the tiles on the spot,” Paiement said.

“At some point, you have the image. You’re happy it works according to such palette and at some point, such colour has been discontinued; it changes everything, you can’t replace it,” Paiement added. “Anyhow, it changes everything: the readability of the different values ​​in this image is limited, we only have a certain number of colours to give all the gradients, the nuances, between very light, very dark, different waves with the same number of pixels.”

To help successfully navigate that task, installers used Keraflex™ Super premium mortar. With its enhanced resistance to freeze/thaw environments, extra smooth formulation that uses Easy Glide Technology™ for ease of application and a consistency that allows adjustability, Keraflex Super met all the criteria for the job. 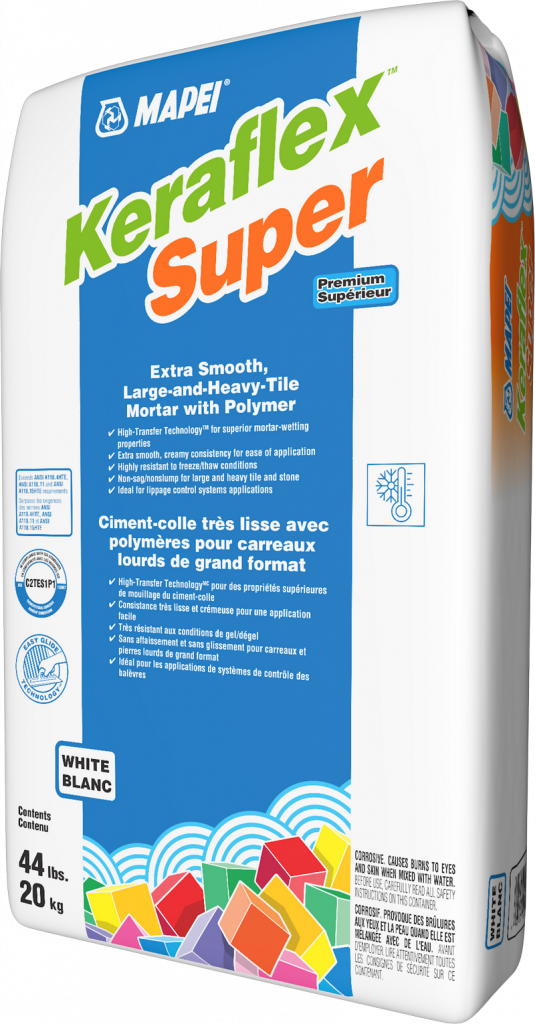 Keraflex Super is MAPEI’s most recently developed mortar in North America, representing over 80 years of research and development history within the company’s international laboratories.

The grouting for each slab was equally important, as grouting represented the last layer of protection from the elements. To maintain the beauty of the artwork and preserve the colour quality, Ultracolor® Plus FA ultra premium, polymer-modified grout was used.

Ultracolor Plus FA features MAPEI’s High-Hydrated Cement Technology (HCT™) to eliminate the common problems related to Portland-cement grout, such as colour consistency and efflorescence (the white film that can appear on tile surfaces over time). Additionally, its formulation incorporates DropEffect™ technology, which reduces surface absorption to help repel water, dirt and grime from penetrating grout joints.

The finished installation would go on to win as the best project entered in the Unique Special Award category at the Terrazzo Tile & Marble Association of Canada (TTMAC) 2022 Hardsurface Awards.

How fitting that MAPEI was able to contribute advanced-technology mortar and grout to an art installation for a new university campus that is devoted to cutting-edge scientific learning and research. May the creativity put into the finished product spur future generations of students who are looking towards scientific breakthroughs of their own. 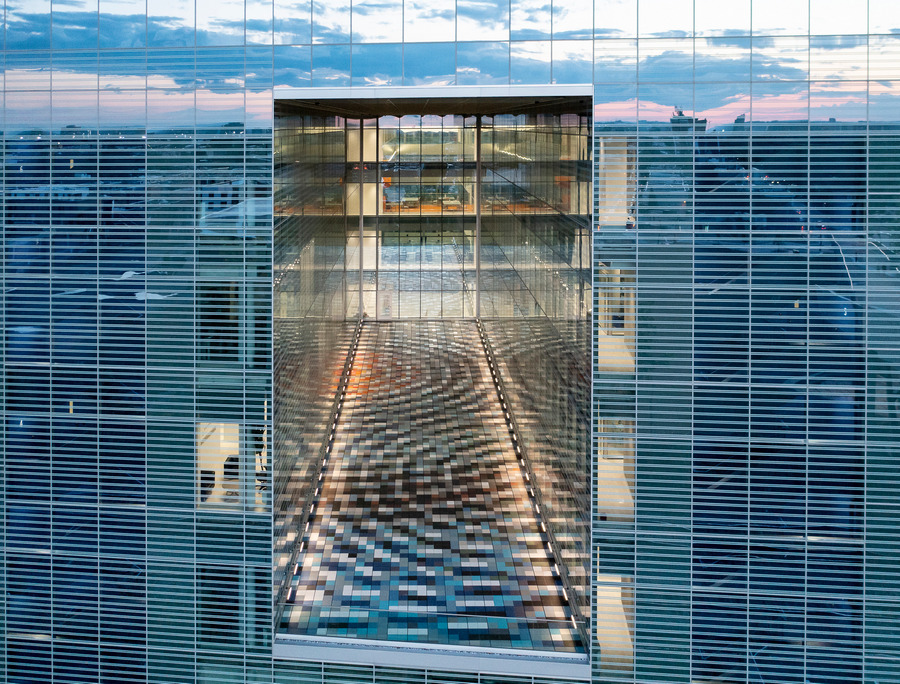 MAPEI is a leading manufacturer of installation materials for concrete restoration solutions (CRS), including the maintenance of cast-in-place concrete. MAPEI also produces other concrete solutions including systems for moisture mitigation, structural strengthening and concrete repair products.

Founded in 1937 in Milan, MAPEI is now one of the world’s leading manufacturers of chemical products for the building industry and has contributed to the construction of some of the most important architectural and infrastructure works worldwide. With 100 subsidiaries operating in 57 countries and 86 manufacturing plants in 35 nations, MAPEI Group employs about 11,000 staff worldwide. The foundation for the success of the company is specialization, internationalization, research & development, and sustainability.

Headquartered in Deerfield Beach (Florida), MAPEI North America consists of the subsidiaries MAPEI Corporation (for the USA), MAPEI Inc. (for Canada) and MAPEI Caribe (for Puerto Rico and other Caribbean islands), whose 28 facilities collectively have a workforce of about 1,800 employees.

MAPEI facilities have been certified to ISO 9001 and ISO 14001 quality standards. An environmentally conscious manufacturer that reinvests 5% of its revenue into R&D, MAPEI offers training for architects, contractors, installers and distributors through the MAPEI Technical Institute. For more about MAPEI, visit www.mapei.ca or call 1-800-42-MAPEI (1-800-426-2734).