The average rent in the GTA increased month over month in March for the first time since January 2020, rising slightly by 0.7 per cent from $2,007 to $2,021. But the average rent is still down 19 per cent annually, according to the latest Bullpen Research & Consulting and TorontoRentals.com Toronto GTA April Rent Report.

The March uptick in average rent is the first sign that the rental market in the GTA might have hit bottom and could start trending upward after a tumultuous year of lockdowns from the COVID-19 pandemic.

The average number of pageviews on TorontoRentals.com for a listing was higher in March compared to February for units of all bedroom types both downtown and in the rest of the GTA. Part of the rise can be attributed to the more active spring market, but this also could be another sign that demand is picking up.

The average rent for condominium rentals and apartments in all GTA municipalities and former municipalities in March also declined 19 per cent year over year. 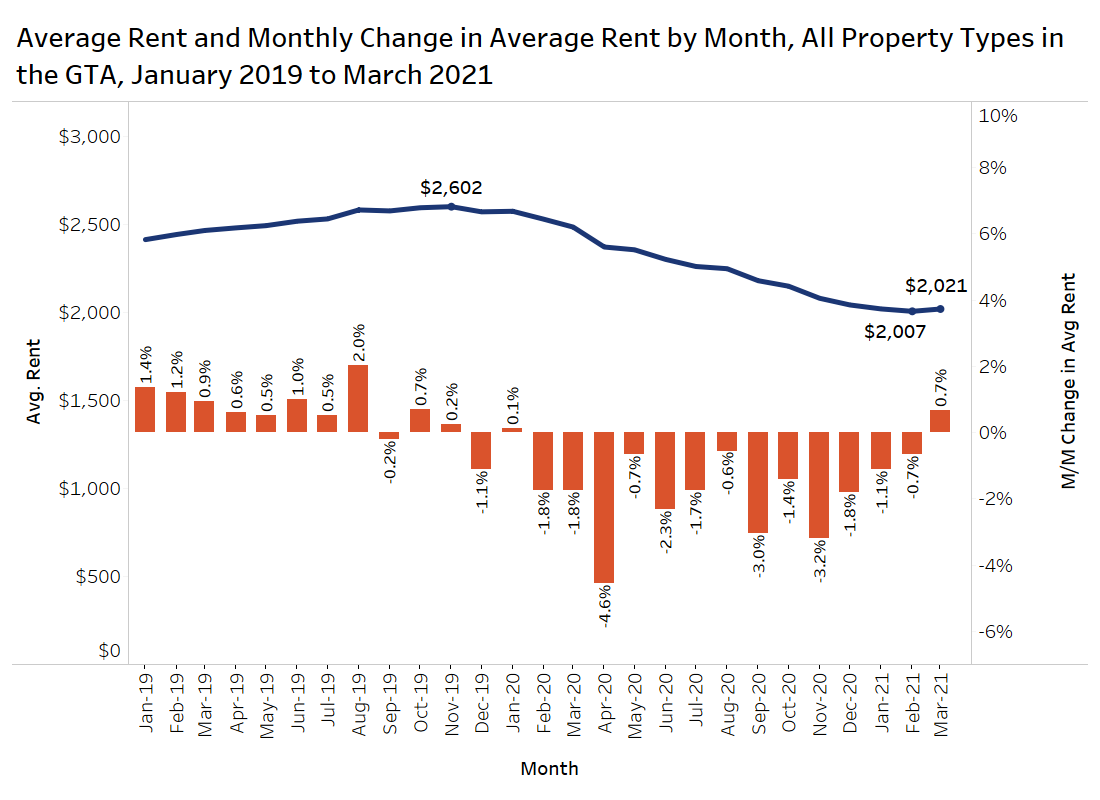 While the average rent of $1,987 in March was at its lowest level over the past year, the month-over-month decline of 0.2 per cent was the lowest since the start of the pandemic.

“The average rent for all property types in the GTA peaked in November of 2019 at over $2,600 per month on average,” said Ben Myers, president of Bullpen Research & Consulting. “The average property for rent was nearly $600 cheaper in February 2021. March experienced a monthly increase, but it is too early to say if it is a statistical blip, or a sign the market has bottomed out, and rents are going to rise again.”

“There was an increase in activity on TorontoRentals.com in March across all property types in the GTA compared to February,” said Matt Danison, CEO of Rentals.ca. “We’re unlikely to see the typical boom in leasing activity in the spring market in 2021, but a more stringent mortgage stress test, and a desire for tenants to secure the lowest rent possible and take advantage of the numerous rental incentives, could push up demand and average rents over the coming months.” 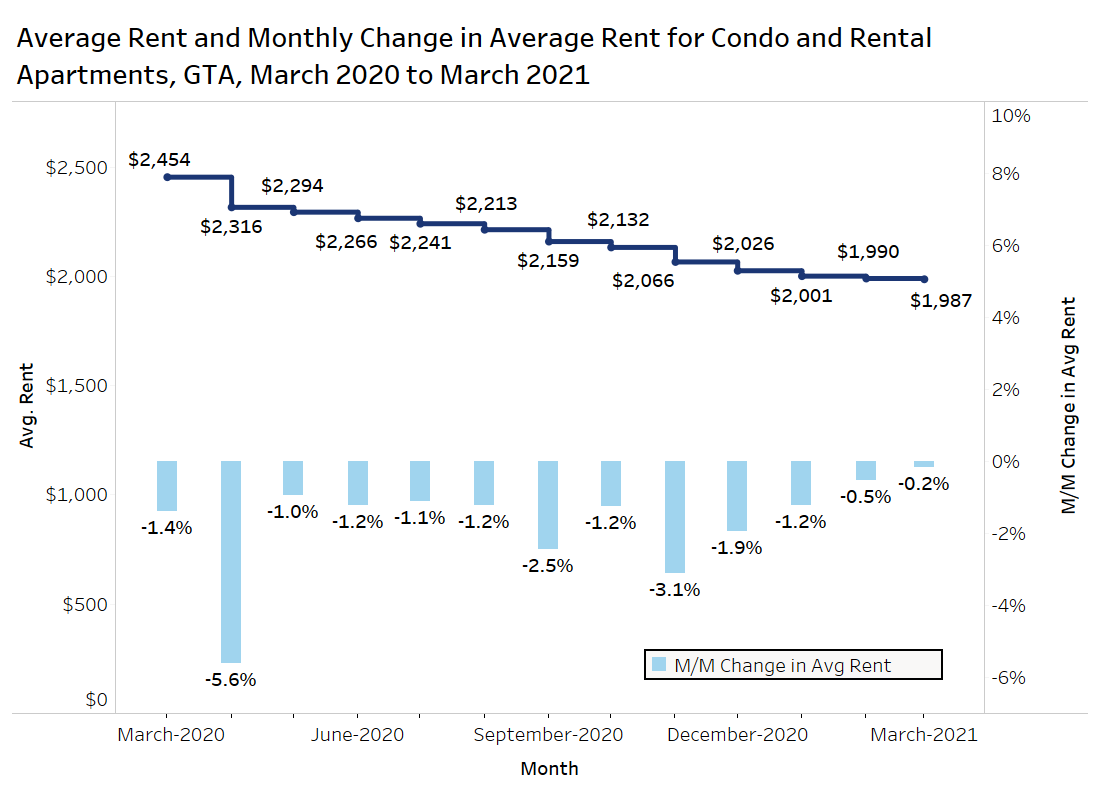 Toronto rents were down 20.3 per cent annually to $2,016 for condominium rentals and apartments in March, while Etobicoke and East York both experienced declines of a little more than 18 per cent.

North York rents for condo rentals and apartments dropped 15.3 per cent; Markham was down 14.5 percent; Mississauga declined 11.5 per cent; Vaughan was down 10.5 per cent and both Brampton and Scarborough declined 7.2 per cent. 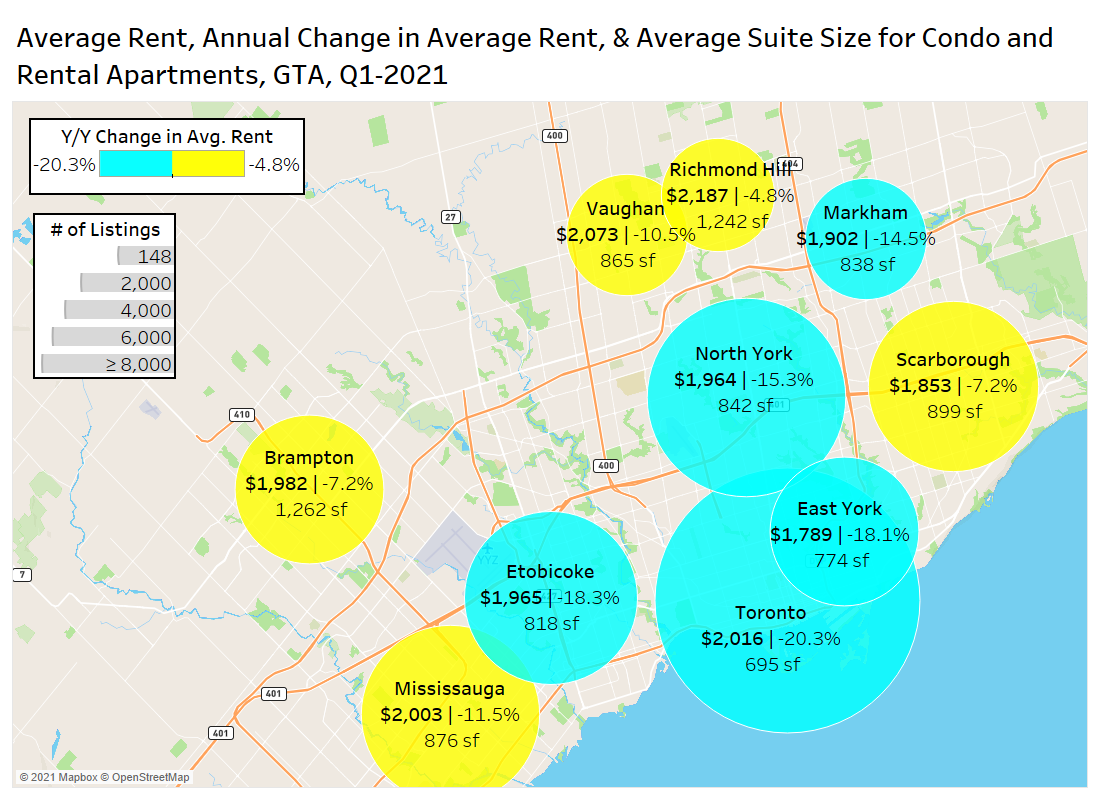 The most rental activity in the GTA happens in the M5V postal code, which encompasses Toronto’s downtown west area. 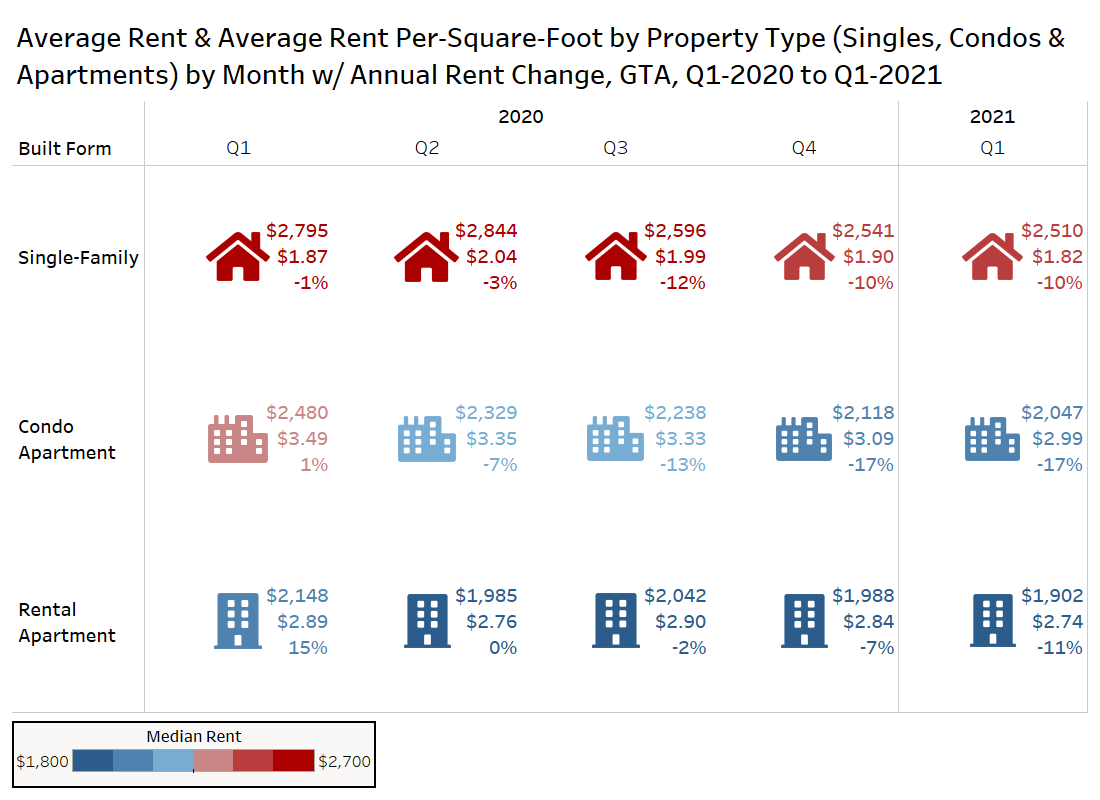