October marked the first month since March 2020 that average rents in the GTA increased year over year. According to the latest Bullpen Research & Consulting and TorontoRentals.com Toronto GTA Rent Report, the average monthly rent for all property types in the GTA was up 1.6 per cent in October to $2,137 over October 2020 ($2,103). 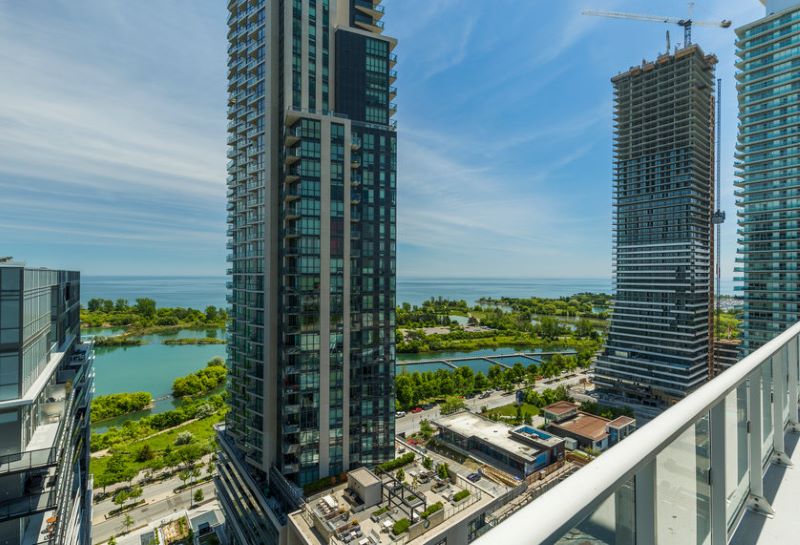 The report reveals a steady decline throughout 2020 and into the early part of this year, hitting a low of $1,971 in March before beginning to slowly climb. 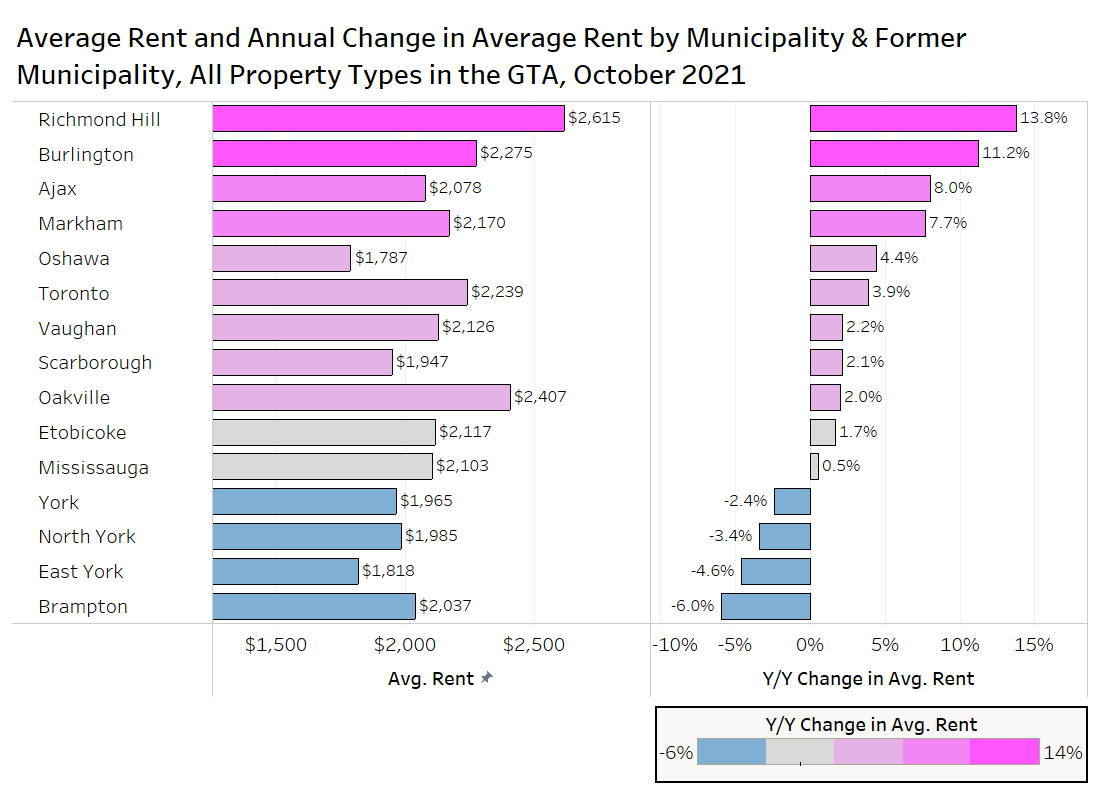 When comparing October figures to March of this year, prospective tenants seeking a studio unit are looking at spending $60 more on rent based on the average asking rents; tenants looking for a one-bedroom could spend $120 more than they might have in March; while two-bedroom units are nearly $160 more expensive per month than seven months earlier.

“October marked a milestone in the COVID-19 recovery; average rents were up year over year for the first time since the pandemic started,” said Ben Myers, president of Bullpen Research & Consulting. “For anyone who has looked for a rental apartment in the past, nothing is more normal than rising rents in the Greater Toronto Area. One- and two-bedroom condo and rental apartments units have been very popular, especially in the downtown postal codes of M5A, M5V and M5G. This is particularly impressive given that new condo and rental completions in the City of Toronto will finish 2021 at the second highest level in over 20 years (per CMHC data)” 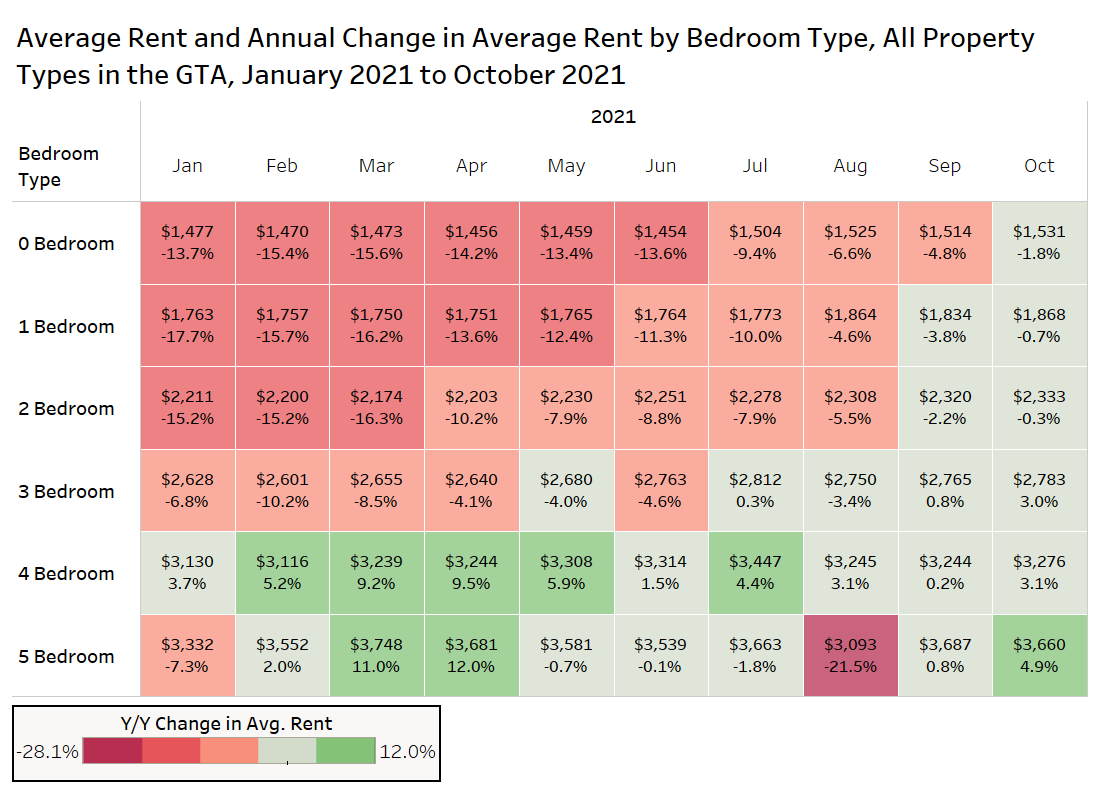 Average monthly rents for single-family homes have risen 16.6 per cent year over year in October — an increase of more than $400 a month from $2,532 in October 2020 to $2,953 this October. Although average rental rates declined throughout most of 2020 for single family homes, rents in October have surpassed the peak levels of 2019.

Apartments have yet to experience the same levels of recovery as condo and single-family homes. Year over year, the average rental rate for apartments has declined 2.2 per cent from $2,013 in October 2020 to $1,969 this October. One caveat here is that incentives for apartments were high last year at this time, and many of those incentives are no longer offered. Many vacant units in higher-rent areas such as Toronto have now been leased, leaving a higher share of the listings in lower-rent areas. 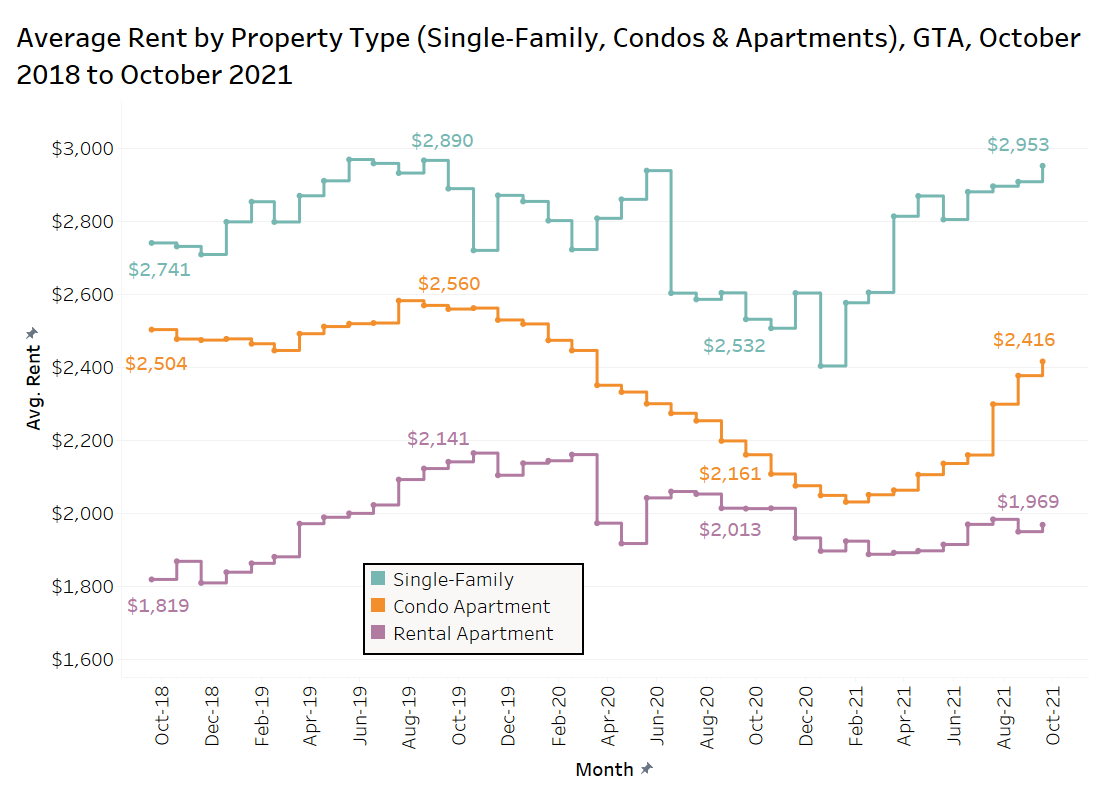