Average monthly rent in the Greater Toronto Area declined for the seventh straight month in June to $2,129, according to the TorontoRentals.com and Bullpen Research & Consulting Toronto and GTA rent report. The average rent is down 1.7 per cent monthly, and 7.3 per cent annually. 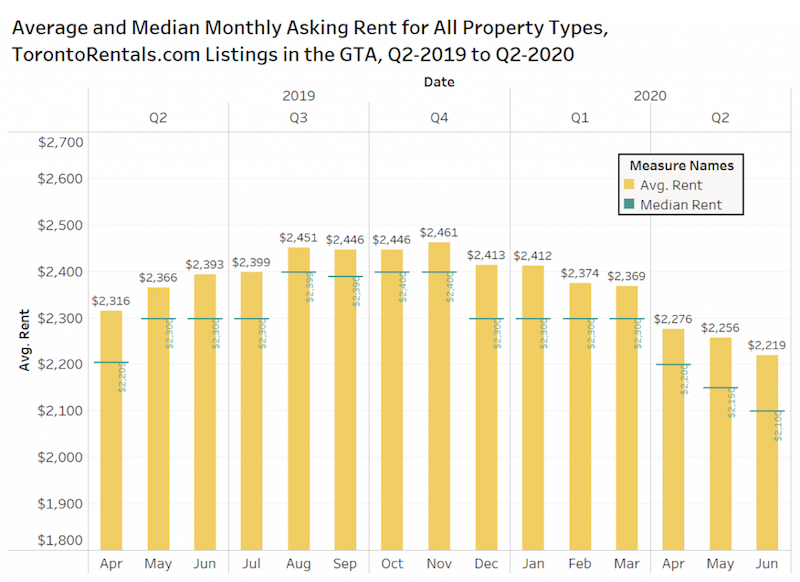 The COVID-19 pandemic continues to put downward pressure on the rental market in the GTA, as job loss, economic uncertainty, and fear of moving for health reasons have severely reduced demand. 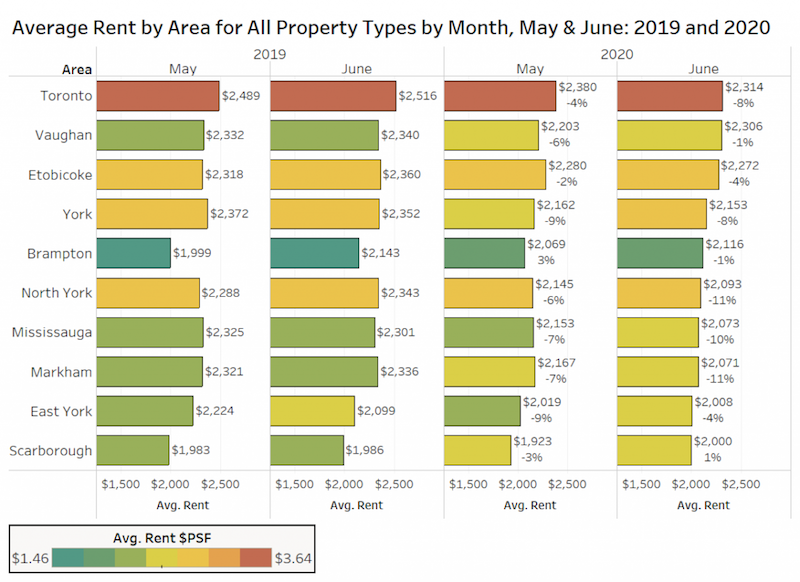 Average rent for apartment and rental condominiums dropped 8 per cent to 12 per cent annually in eight of 10 Toronto neighbourhoods.

Rents were up 10 per cent annually in North St. James Town, but the area was boosted by an increase in the number of listings on TorontoRentals.com at the new high-end purpose-built rental apartment called The Selby on Sherbourne, south of Bloor. The biggest decline was seen in the Moss Park area, which was down 14 per cent.

“The rental market in the GTA continues to soften, but the average rent for rental apartments increased month over month,” said Ben Myers, president of Bullpen Research & Consulting. “This isn’t likely due to owners raising rent, but shows that landlords are standing firm on their asking rent, convinced that demand will return in the late summer as every region enters Stage 3 of the reopening.” 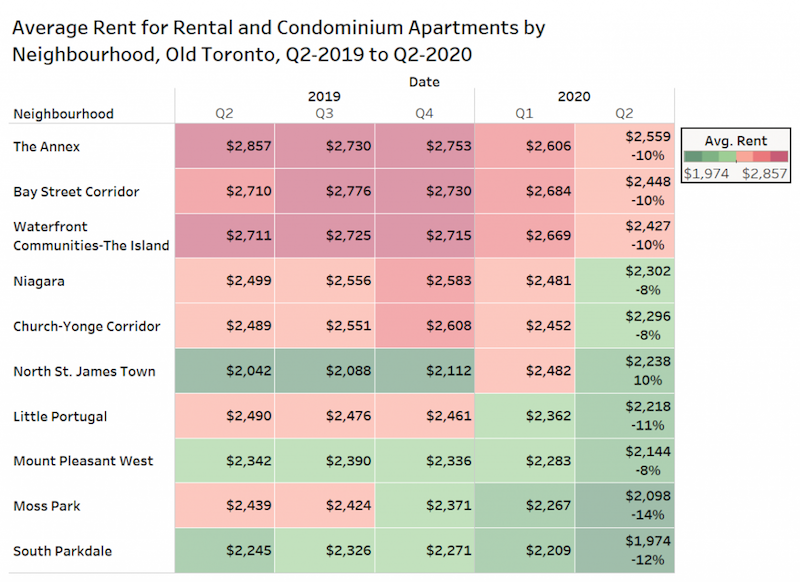 The average monthly rent was up 15 per cent year over year in January, but fell all the way to -4 per cent annually in May. But rents are now above the June 2019 level by 1.7 per cent.

Condominium apartments did not experience the same bounce back in June, as rents declined 1.4 per cent monthly and 8.7 per cent annually.

Within the former City of Toronto, condominium apartments for rent were nearly $260 per month cheaper in the second quarter of 2020 compared to the same period last year.

Despite the pandemic, on average, a tenant would only be saving about $15 on a purpose-built rental apartment compared to a year earlier.

Average rent per square foot for rental apartments in the GTA increased by nearly 11 per cent month over month, and is higher than June 2019, nearly fully recovering from its pandemic-related decline.

Rent per square foot for condo apartments has increased in each of the last two months, rising 1.9 per cent month over month in June to $3.33 per square foot. But the average rent level is still below the 2019 pace in June (-1.1 per cent  year over year).

May marked the third highest monthly total over the last three years for condominium apartment completions at 2,229, according to the Canada Mortgage and Housing Corporation. A significant portion of those units were purchased by investors and are hitting the rental market.

Q2 condo sales down 50 per cent from last year, but prices are up: TRREB