According to the latest National Rent Report by Rentals.ca’s and Bullpen Research & Consulting, the average asking rent for all Canadian properties saw its first increase after six months of declines. In May, rent grew by 2 per cent month over month to $1,708. 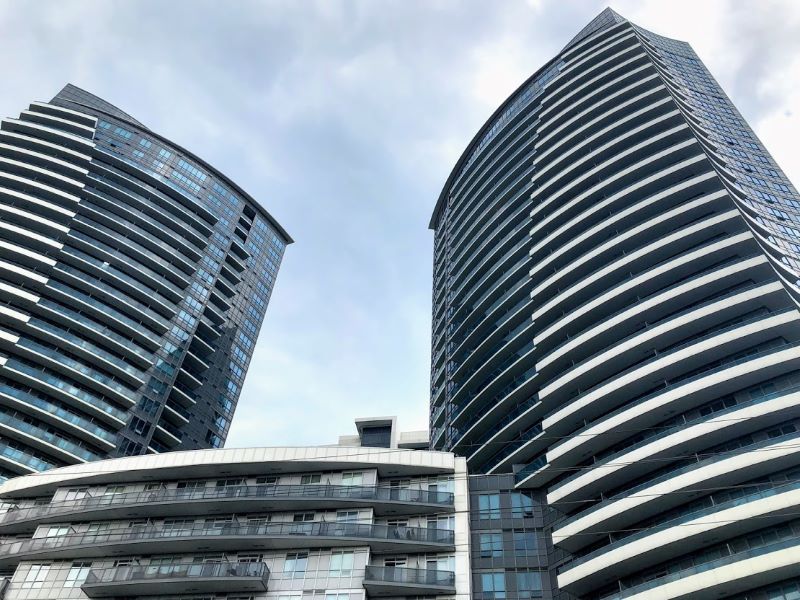 After a year of rental rate declines because of COVID-19-related lockdowns, the Canadian rental market is starting to recover, according to the report. The average monthly rental rate experienced its first month-over-month increase since October of last year.

With the promise of the border opening to further immigration, international students and tourism, rental rates are expected to continue to rise. The fall of 2021 could be a busy season for landlords and tenants. 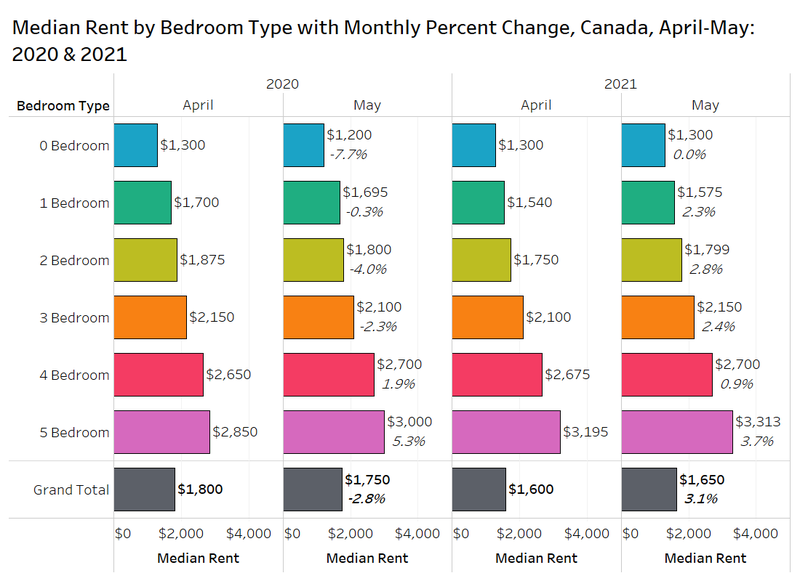 “Data in May showed the first definite sign of a market turnaround, as COVID-19 has had a major impact on rental rates, sending them plunging, especially in the downtown core areas of Canada’s largest cities,” said Ben Myers, president of Bullpen Research & Consulting. “The ramp-up in the vaccine rollout and anticipated return to normalcy has tenants trying to get in before rents trend up, increasing demand for all product and bedroom types in May, especially in Vancouver and Toronto.”

Demand for larger units has not dissipated, as the average monthly rental rates for single-family homes continues to rise — increasing from $2,214 in January to $2,608 in May, a rise of 18 per cent in that time span. Anecdotal evidence shows bidding wars, and tenants renting homes sight unseen.

Average rent for single-family homes increased by 4.2 per cent in May over April as Canadian tenants continue to look for more space in recent months.

Vancouver still leads the list of 35 cities for average monthly rent for a one-bedroom home in May at $1,981 and for a two-bedroom at $2,760. 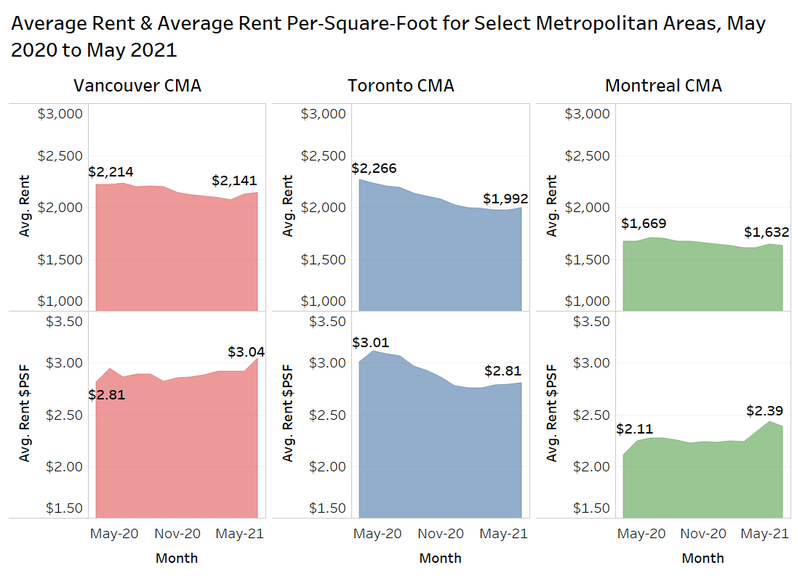 Toronto finished second on the list for average monthly rent in May for a one-bedroom home at $1,833 and for a two-bedroom at $2,455. 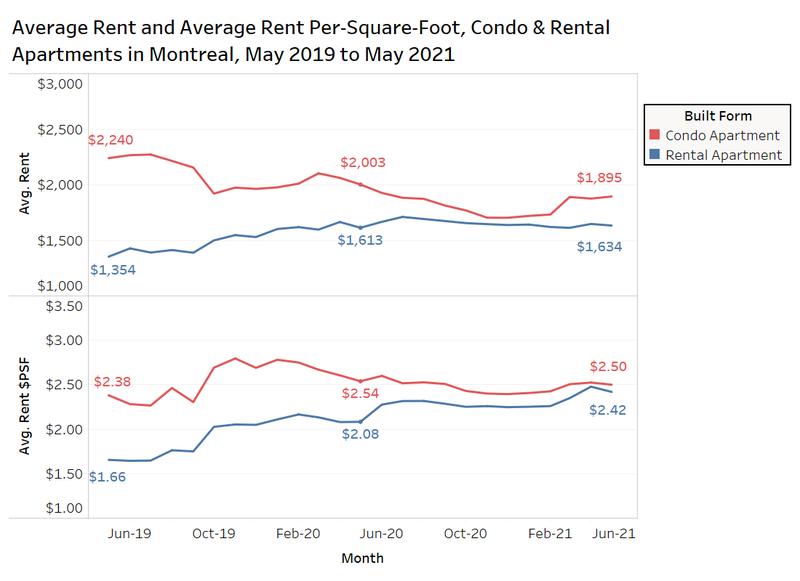 Vancouver experienced the largest month-over-month increase among the major municipalities for condominium rentals and apartments with a monthly increase of 5.4 per cent in average rent of $2,315, the highest in the country.

Hamilton was up 3.3 per cent monthly for condo rentals and apartments, while London, Etobicoke, and Mississauga experienced a month-over-month increase in average rent of about 2 per cent. Toronto rents increased by 1.6 per cent to $2,027 per month on average.

Rents declined month over month for condo rentals and apartments in Burnaby by 3.8 per cent; in Kitchener by 2.6 per cent; in Saskatoon by 2.3 per cent and  in Edmonton by 1.7 per cent.

The average property listed for rent on Rentals.ca in May in the Vancouver Census Metropolitan Area (CMA) was offered at $2,141, which represents an annual decrease of 3.3 per cent. The average per-square-foot rent is up 8.2 per cent annually to $3.04, which likely reflects the greater number of small units in the market. Tenants have flocked to larger apartments in locations farther from their place of employment during the pandemic. 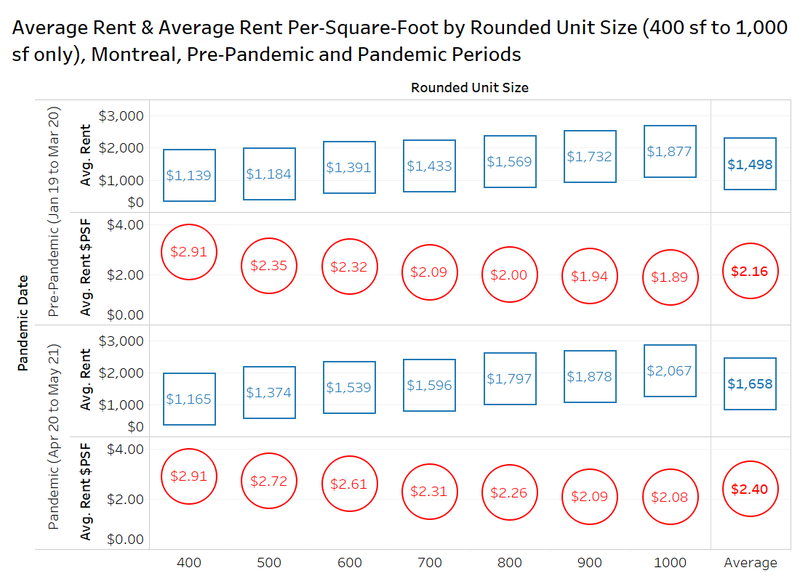 Can Peel walk the tightrope of mandated affordable housing?

CMHC says annual pace of housing starts rose 3.2 per cent in May compared with April