Average rent in Canada down 9.5 per cent year over year: Report

Rents for one- and two-bedroom apartments and condominium rentals continue their downward trend year over year, while the average rent for all Canadian properties has remained the same the last four months, according to Rentals.ca’s and Bullpen Research & Consulting’s latest National Rent Report. 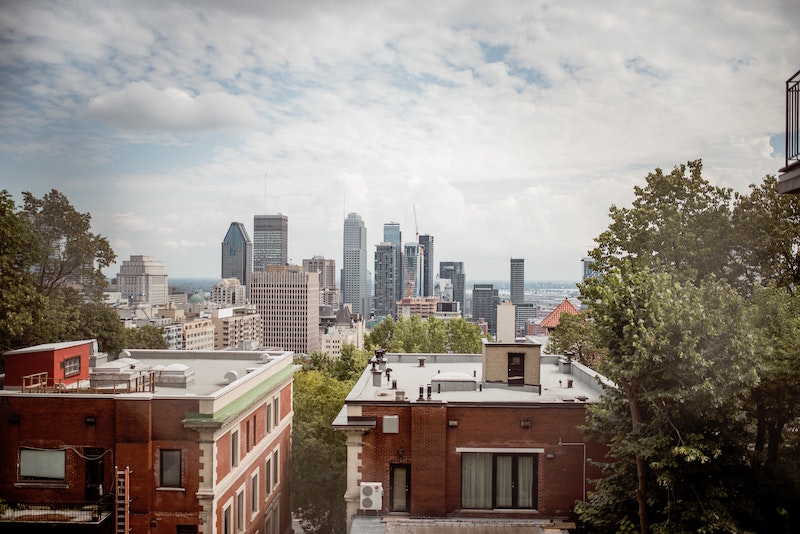 In September, the average rent for all property types listed on Rentals.ca in the country was $1,769, the same as last month. The September average monthly rate is down 9.5 per cent annually.

The data on a national basis suggests that tenants are looking for larger units, either by square footage or by number of bedrooms, but appear to be avoiding the most expensive single-family properties and condominium apartments in prime neighbourhoods.

The report states that the work-from-home “phenomenon” and pandemic continue to shift demand patterns as tenants look for locations farther from their place of employment, cheaper properties, and units with more space.

“Many prospective tenants desire more space as they work from home,” said Matt Danison, CEO of Rentals.ca. “We encourage our clients to highlight any extra space such as a den which can be used for office space or amenities such as fast internet, which can make working from home easier.” 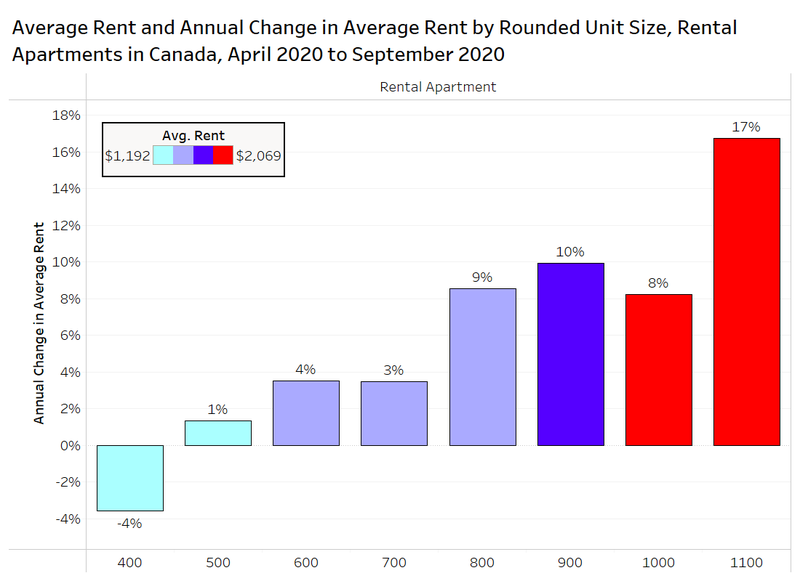 Montreal (17.2 per cent) and Kitchener (11.5 per cent) were the only two major municipalities in all of Canada to see rent appreciation for apartments and condo rentals, according to the data. Hamilton and London were removed from the chart because of a high number of listings from new purpose-built rental apartment projects pulling the average rent up.

Toronto and North York, along with Winnipeg, saw drops in rental rates of about 14 per cent. The report reveals that Toronto’s -14.1 per cent annual rent drop is the worst in the country among major markets. 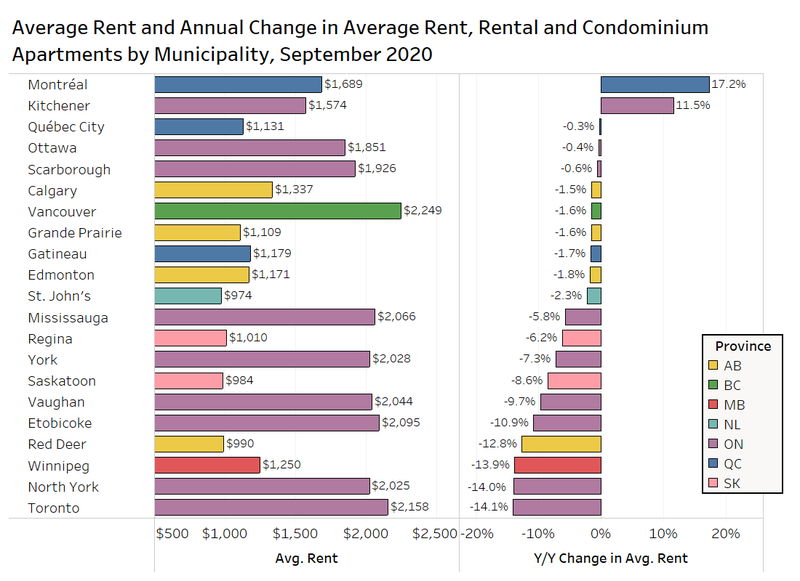 “Toronto is seeing the biggest decline in rental and condo apartment rental rates on average among major municipalities in Canada; this is driven by the rapid decline in downtown condo rents, with many recently completed buildings seeing rates drop by 10 per cent  to 15per cent annually,” said Ben Myers, president of Bullpen Research & Consulting. “Several of the condos experienced listings growth of 100 per cent to 200 per cent annually — a textbook example of what happens with less demand and more supply.”

In Toronto, single-family rental rates are down 20 per cent year over year in the third quarter, while condo rents are down 16 per cent annually. The average rent for purpose-built apartments is $2,122 per month, down 3 per cent from the third quarter of 2019.

On a provincial level, British Columbia had an average rent of $2,065 per month, edging out Ontario ($2,040) for the highest average rents in September for all property types. British Columbia was one of just two provinces to post positive year-over-year rent growth, joining Quebec. 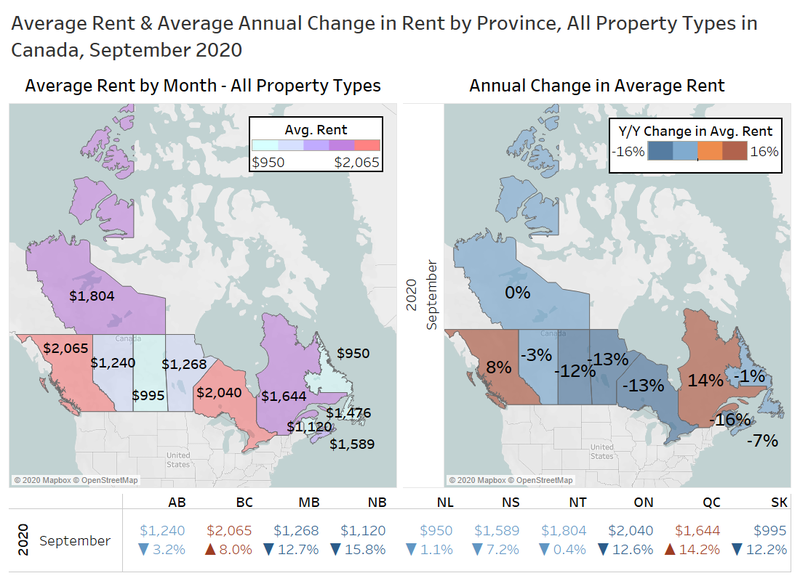 The average monthly rent is down for all bedroom types in Canada with one-bedroom suites falling 6.3 per cent annually to just under $1,600. 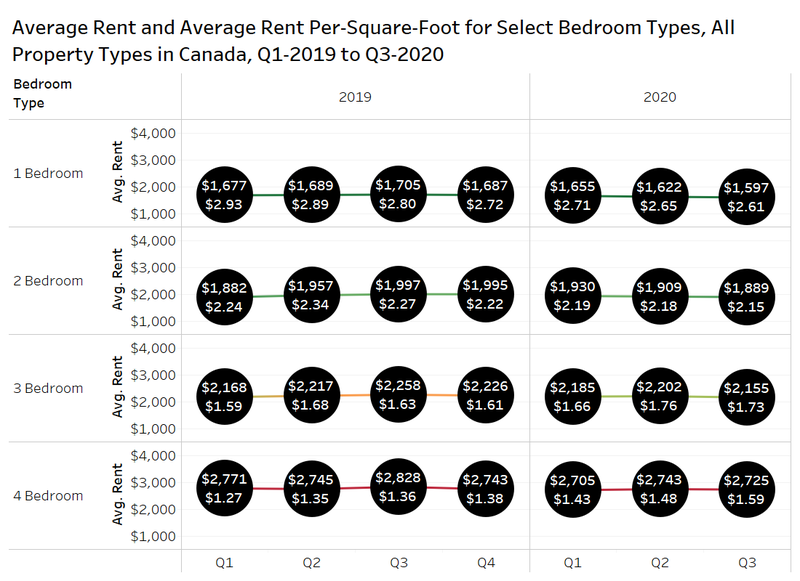 The latest employment data suggests Canada added nearly 380,000 jobs in September, and analysts have estimated that 75 per cent of employees who lost their jobs during the early months of the pandemic have been rehired or found new work.

With schools open and day cares re-opening, and the paring back of government assistance programs, the report suggests that more Canadians have the ability and motivation to return to work, and/or look for work. More employed Canadians and more hiring results in more demand for housing, and could send the rental trendline climbing upward again this winter.