Average rent in the GTA down over 16 per cent annually: report

The average asking monthly rent in the GTA for all property types was down more than 16 per cent year over year in November to $2,056, declining for the 12th straight month, according to the TorontoRentals.com and Bullpen Research & Consulting Toronto, GTA rent report. 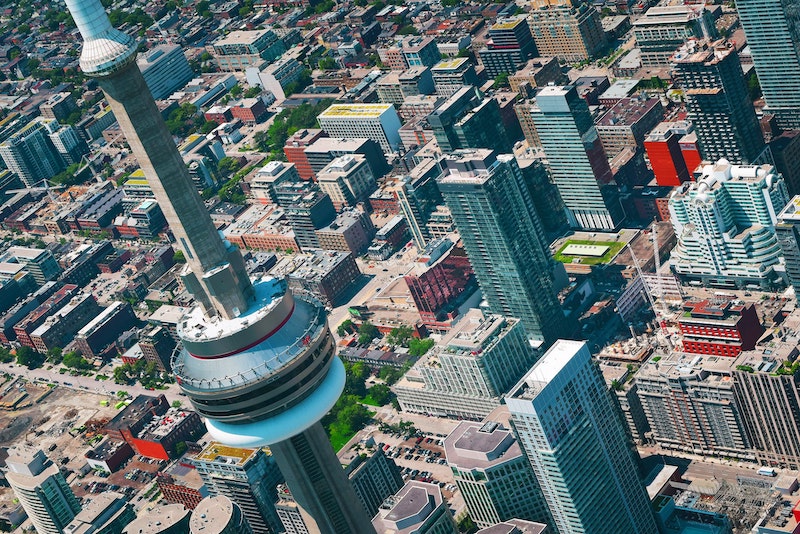 With a second lockdown ordered in Toronto, and many white-collar employees continuing to work from home, any rapid reversal in rents is not expected in Toronto or the GTA over the next four to six months, according to the report.

“The approval of the COVID-19 vaccine and eventual distribution in early 2021 should start to bring down the number of cases and improve consumer confidence. But until more office buildings are full, and the border reopens, don’t expect a rush back into the downtown rental market,” says the researchers. 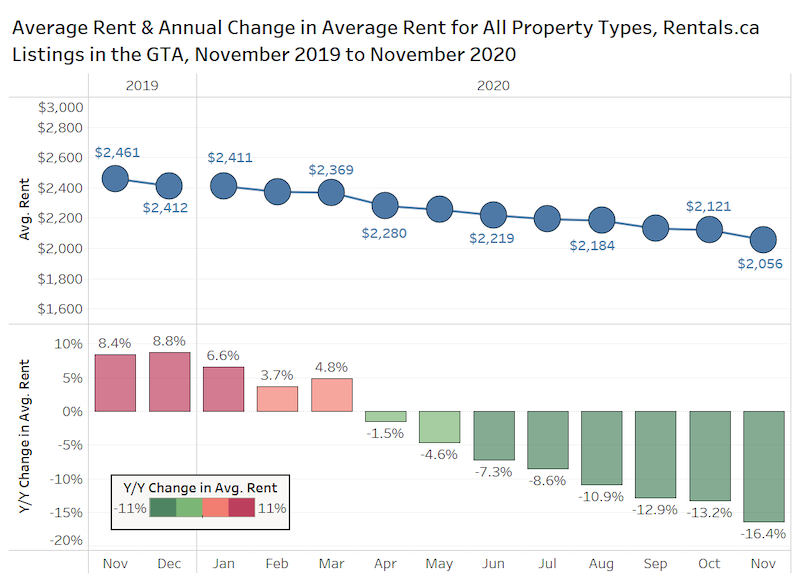 Rents are expected to decline in Toronto until the middle of 2021, and then slowly recover in late 2021 before rising sharply in 2022, finishing that year up 13 per cent to 14 per cent annually, but still slightly below the 2019 peak rent level of $2,454 per month.

Rents are expected to slowly increase through the end of 2022 in the GTA suburbs and the city of Hamilton. 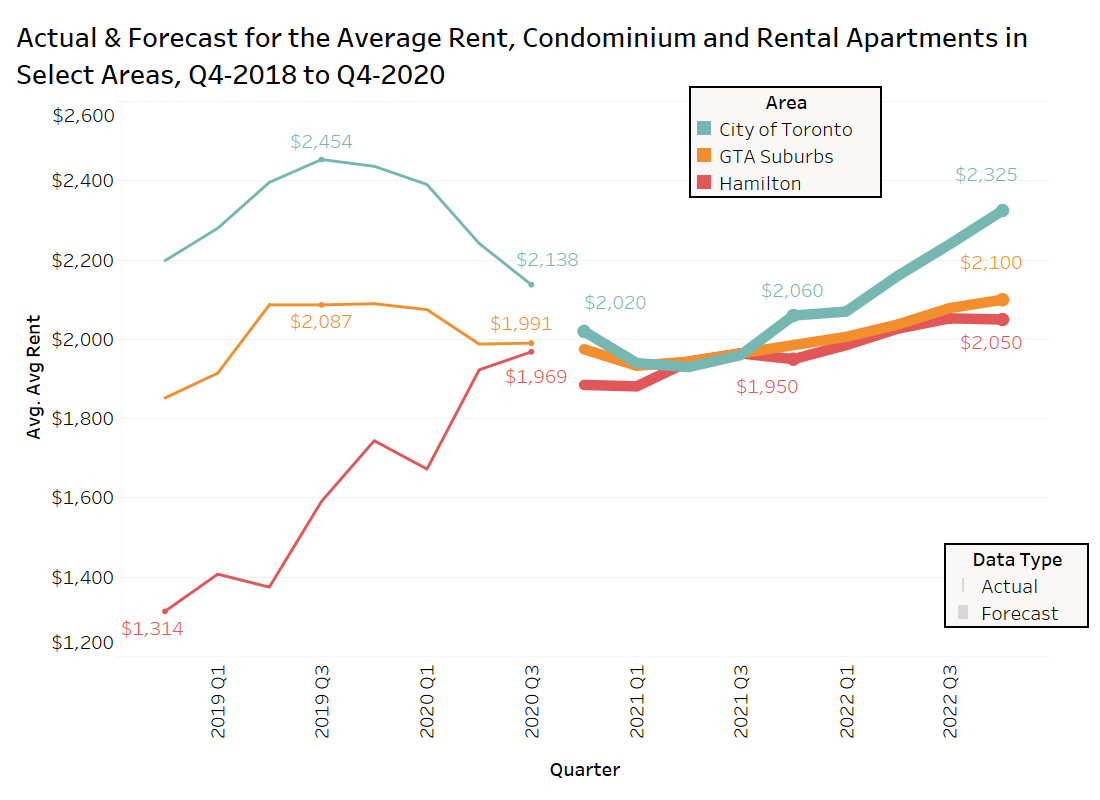 “Our forecasts call for even lower rents in the first half of 2021, with a modest rise in the second half of the year,” said Ben Myers, president of Bullpen Research & Marketing. “However, we expect a substantial bounce back in 2022, with rents increasing by double-digits with a mad rush back into the downtown Toronto market.”

Average rent for condominium rentals and apartments in 12 of 13 GTA municipalities declined in November — nine of them had rent drops of more than 10 per cent. Average rent in pre-amalgamation Toronto continues to experience dramatic rate decreases, with November year-over-year changes in average rent approaching 19 per cent.

“The GTA will likely see a record one-year rise in the vacancy rate in 2020,” said Matt Danison, CEO of TorontoRentals.com, “TorontoRentals.com continues to see a constant flood of new listings on our site.”

At the other end of the spectrum is Oshawa, which has seen a 13.8 per cent increase, but the city  has the most affordable average rent at $1,694. 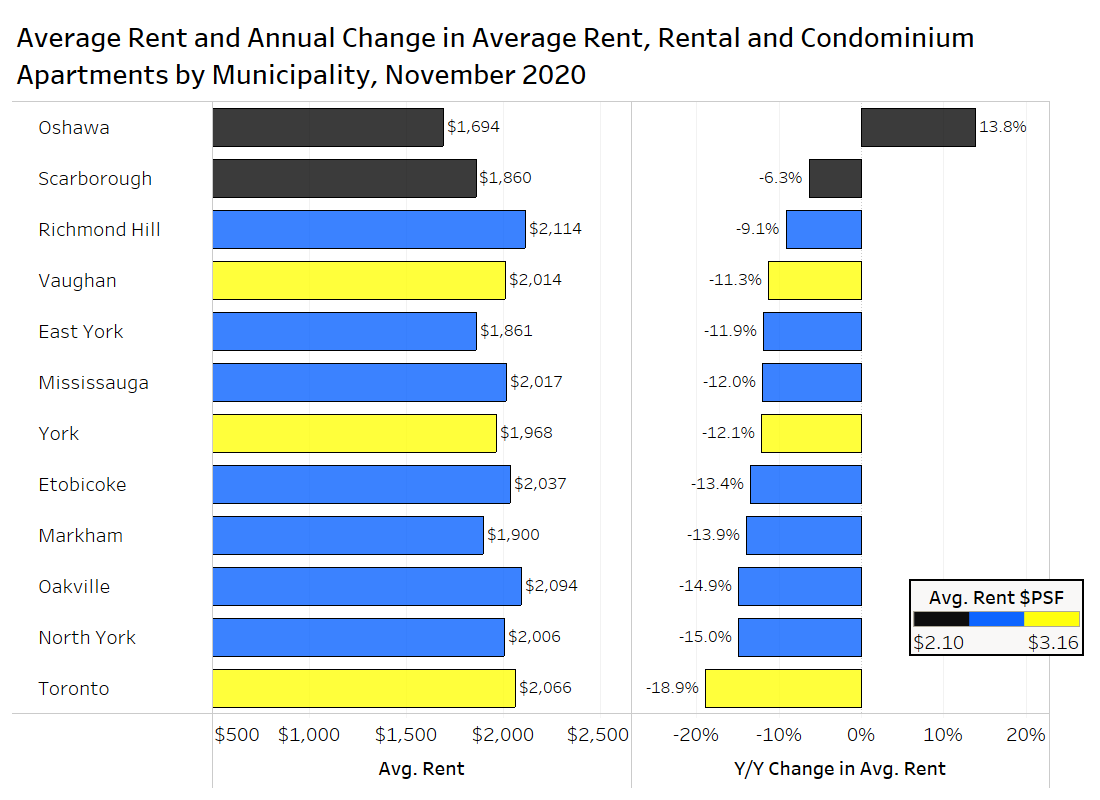 One- and two-bedroom suites are both down by about 15 per cent from November 2019 to November 2020 for average rent in the GTA.  Average rents are now $1,827 for a one-bedroom, and $2,288 for a two-bedroom, which equals a potential saving for the prospective tenants of $330 and $390, respectively from one year before.

In November of 2019, rental rates in the GTA were strong, with studio units showing close to 16 per cent rent growth annually, and one-bedroom units posting growth of over 14 per cent.  Fast forward to November 2020, where COVID-19 continues to negatively impact the market, studio to three-bedroom suites are all experiencing their greatest monthly declines since the pandemic started. 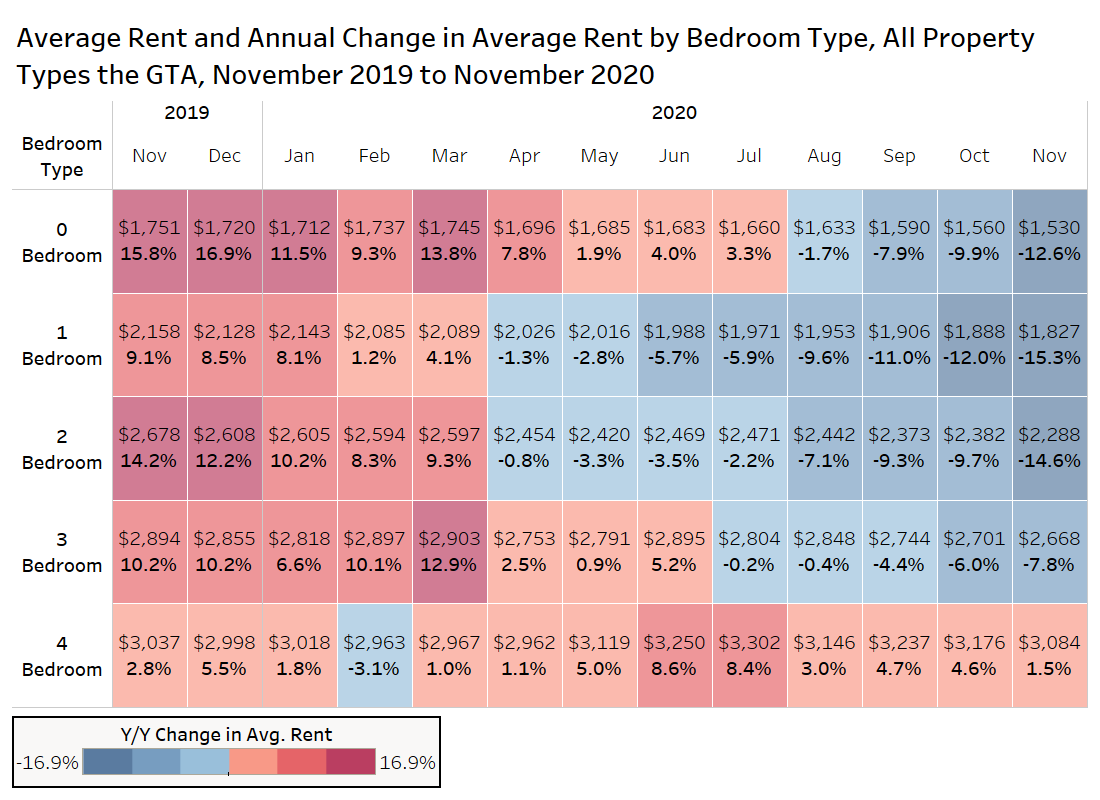 Many owners and landlords in the GTA are offering one or two months of free rent, as opposed to dropping their asking rent.

In the former city of Toronto (pre-amalgamation), average rent and average rent per square foot for every unit size in both condo and rental apartments experienced year-over-year declines in November. Changes in the marketplace are so dramatic that in November, a tenant could lease an 800-square-foot condo for about the same amount of an average 600-square-foot condo in 2019.

Property values in Ontario increased by more than $37 million in 2020: MPAC assessment