Larger units still in high demand as tenants continue to work from home; Canada’s average monthly rent still $190; below market peak of $1,954 in September 2019; Vancouver, Toronto still the most expensive cities for renters 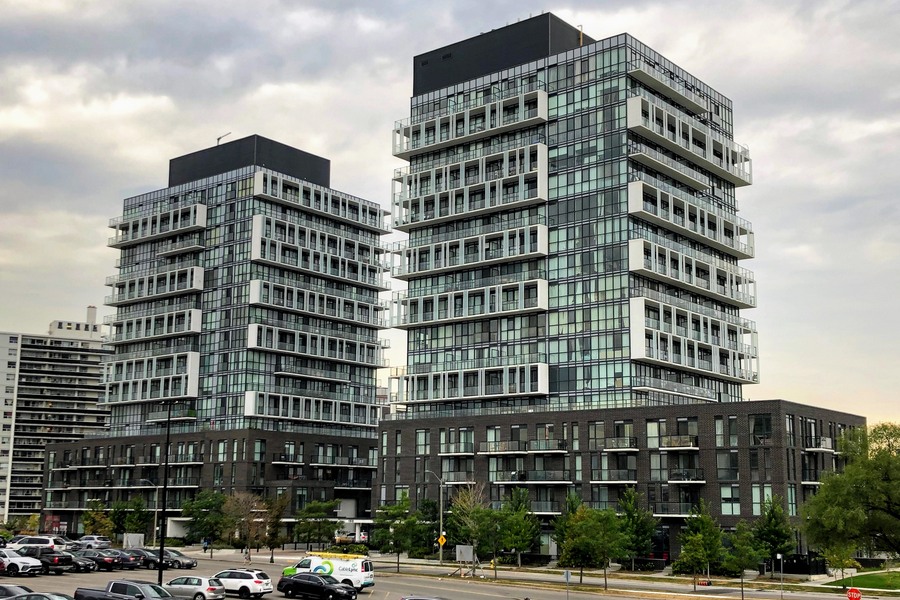 For the fourth consecutive month, the average rent in Canada increased for all property types, rising to $1,763 in August, up 0.6 per cent over July and up 5.2 per cent since this year’s market low of $1,675 in April, according to Rentals.ca’s and Bullpen Research & Consulting’s latest National Rent Report.

Rents are expected to continue to rise as university and college classes resume, as some workers return to the office, and as the border is reopening. This forecast is contingent on the Delta variant staying in check.

Single-family homes have bounced back with a higher average rental rate in August than in the same month in 2019. Average monthly rent for apartments continues its slow and gradual increase year over year, while average rents for condominium apartments continue their slow and gradual decline. But condo rental rates could soon turn around on a national basis, as they are up 15 per cent and 16 per cent from February to August in Toronto and Vancouver, respectively.

Larger units with three or four bedrooms have experienced significant year-over-year increases, suggesting the demand for larger units persists as tenants expect working from home to continue in some fashion.

“The rental market continued its upward trend on a national basis in August as some normalcy returns to the country,” said Ben Myers, president of Bullpen Research & Consulting. “With elementary schools opening in September, there was strong rent growth for single-family properties again in August. Toronto and Vancouver are experiencing huge rental demand, especially for higher-end condos.”

But a recovery is occurring for smaller suites, with the average one-bedroom unit now $75 per month more expensive than the average in April of this year. 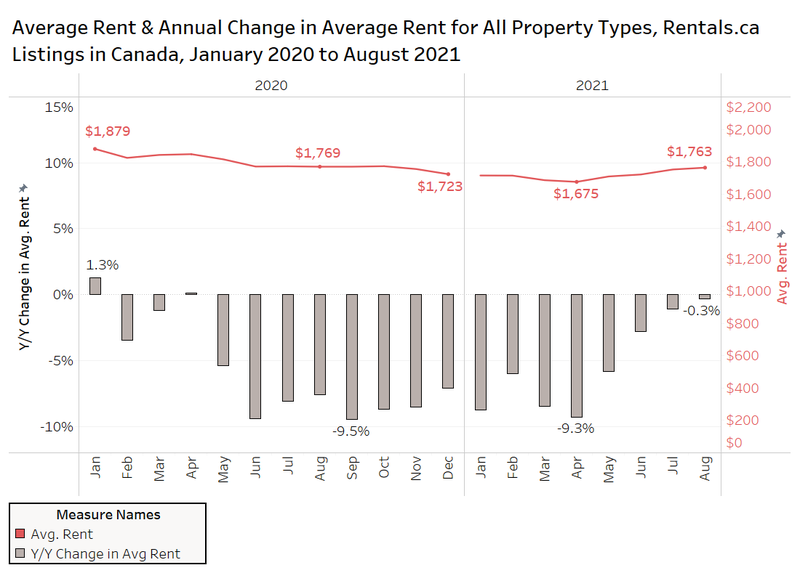 Year over year, average monthly rent in August for a one-bedroom in Vancouver was up 15.7 per cent and up 12.4 per cent for a two-bedroom.

Toronto finished second on the list for average monthly rent in August for a one-bedroom at $1,989 and for a two-bedroom at $2,628.

Calgary and Kitchener also experienced significant year-over-year increases in average rental rates, increasing by 8 per cent and 7.7 per cent respectively.

Average rents for condo rentals and apartments in Red Deer were up 5.9 per cent annually in August, and rental rates were up 1.3 per cent in Nepean.

North York experienced the largest year-over-year decline in average rent for condo rentals and apartments in August, decreasing 8.2 per cent, and Etobicoke and Scarborough had similar levels of year-over-year decreases, both declining a little over 5 per cent annually.

Cities and areas also with declines in year-over-year average rents for condo rentals and apartments in August were: East York, -4.3 per cent; Montreal and Edmonton, -3 per cent; Mississauga, -2.8 per cent; Toronto, -2.3 per cent; Regina and Ottawa, -2.2 per cent and Saskatoon, -1.2 per cent. 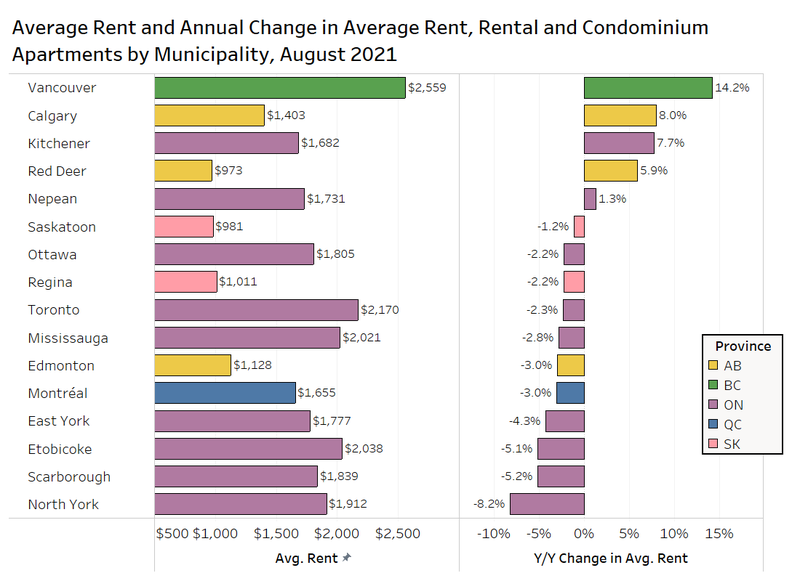 The average rental rate for condo apartments in Edmonton steadily declined through 2020 and 2021, landing at $1,410 per month in August.

In Calgary, the average rental rate gradually increased throughout 2020 and 2021 settling at $1,690 per month in August.

The average rent in Ottawa, despite experiencing some fluctuations throughout the last two years, has not changed significantly between August 2019 and August 2021, declining only 1.6 per cent to $2,223 per month.

In Toronto, the condo rental market has recovered in recent months, rising 7.2 per cent month over month to $2,362 in August, and 15 per cent since the February low.

The average rental rate in Vancouver experienced significant declines through 2020 before recovering in August to $2,696 per month, which is up 16% since the February low of $2,332 per month. 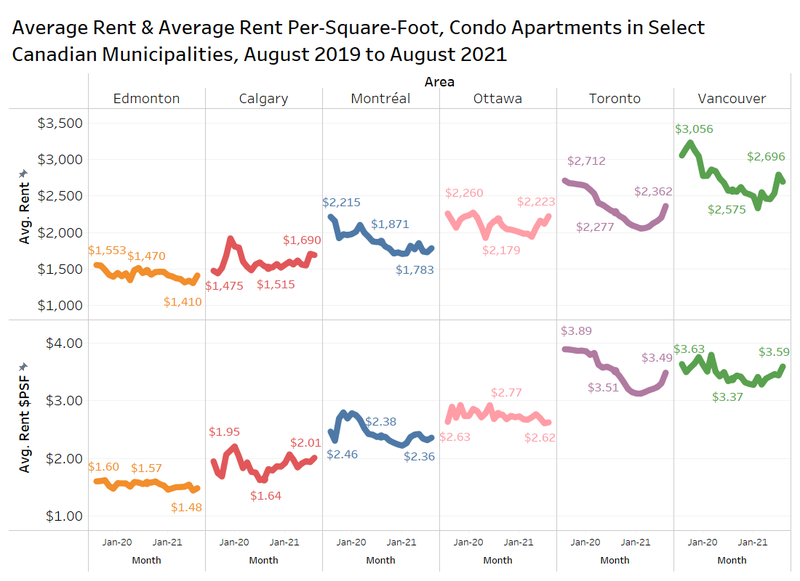 The average rent for single-family homes in August was $2,743 per month, which is up slightly from August 2019. After a decline of 15 per cent in August 2020, the average rental rates increased 19 per cent this year. 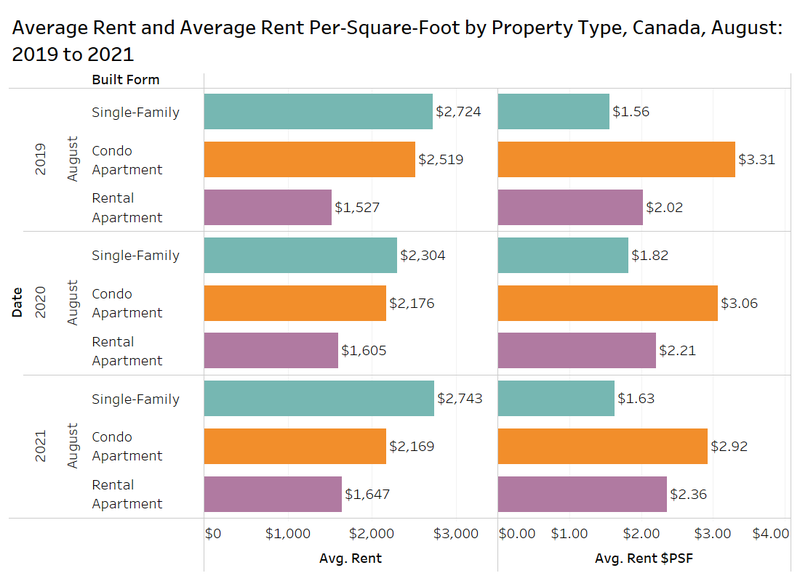 In Toronto, the Bay Street Corridor remains one of the most expensive neighbourhoods in Toronto for renters in August, along with Waterfront Communities and Kensington-Chinatown, which has the largest year-over-year increase at 9 per cent.

Some of the more inexpensive neighbourhoods for average rent include South Parkdale, North St. James Town and Mount Pleasant West. The average rental rate in South Parkdale has declined 14.2 per cent annually to $1,691 per month in August. 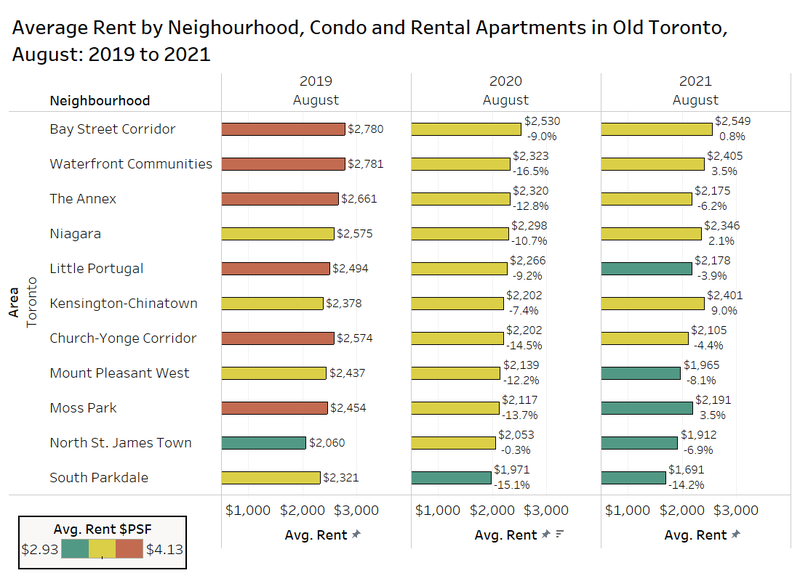