Tenant demand, rents expected to increase as country reopens - average rents for single family homes up 15% since beginning of the year 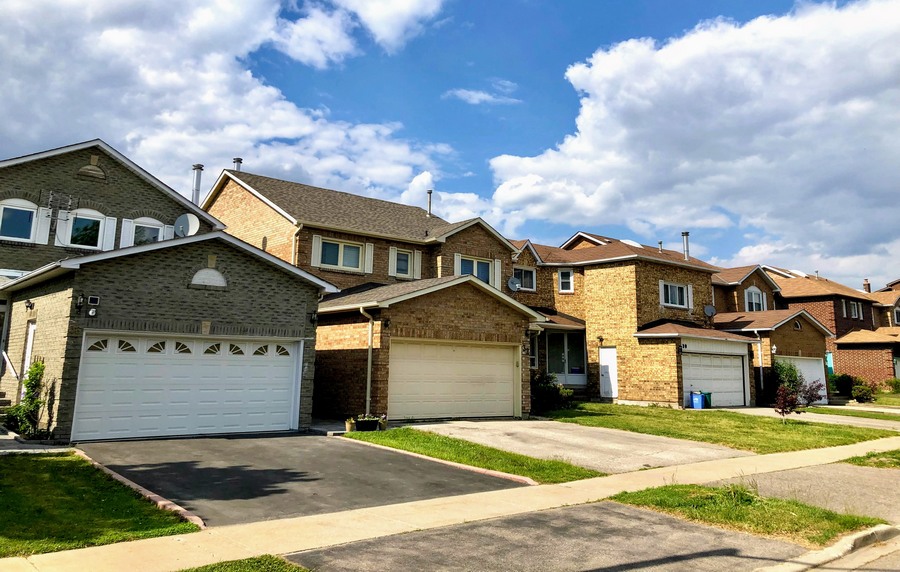 The average rent in Canada increased for the second month in a row, rising to $1,721 per month after six straight months of decline.

The average asking rent for all Canadian properties listed on Rentals.ca in June grew by 0.7 per cent after rising 2 per cent month over month in May, according to Rentals.ca’s and Bullpen Research & Consulting’s latest National Rent Report.

Year over year, average monthly rents in Canada were down 2.7 per cent, but a big change from May when it was down 5.7 per cent annually, and April when average rents were down 9 per cent.

According to the report, as the country begins to open, tenant demand is expected to pick up, and further growth will continue for the rest of 2021. Expect even larger rent increases in 2022, when most COVID restrictions are lifted, offices are open, immigration is back to pre-pandemic levels and most classrooms are in session.

On a national basis, large units continue to outpace small units in terms of rent growth as many tenants anticipate working from home longer, while others expect the move to remote work is permanent. 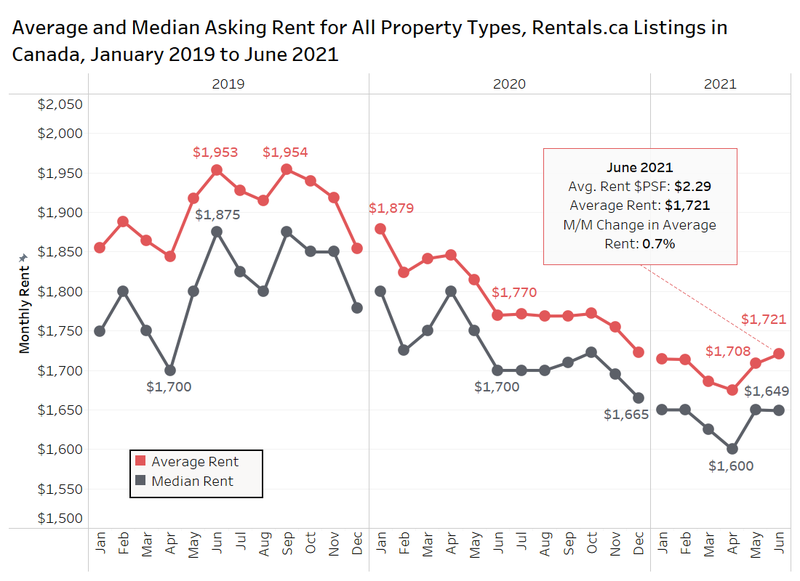 The single-family rental market remains strong, and apartment rents are now above pre-pandemic levels. The average rent for condos has started to turn up, but remains below peak levels as the high-end downtown markets have yet to fully recover.

Single-family homes have experienced the sharpest increase in average monthly rent since the start of 2021, from $2,214 per month to $2,553 per month, up 15 per cent. On an annual basis, the average rent in June for single-family homes is up 5.5 per cent over June 2020.

The average monthly rental rate for condo and rental apartments have also experienced increases since the start of 2021, but to a lesser extent than single-family homes.

On an annual basis, average monthly rent for apartments is up 3.1 per cent over June of 2020. 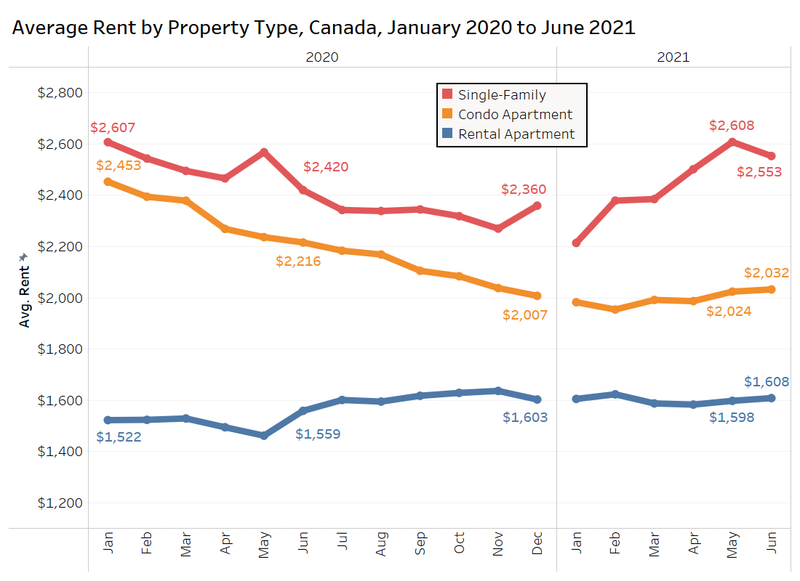 The average property listed for rent on Rentals.ca in June in the Vancouver Census Metropolitan Area (CMA) was offered at $2,152, an annual decrease of 2.8 per cent, but $11 a month more than May. 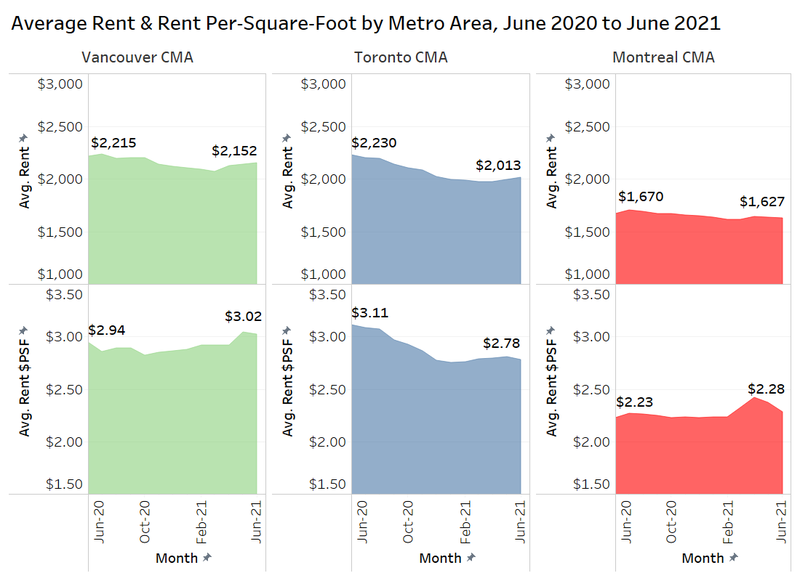 Halifax experienced the largest month-over-month increase in average rent in June, up 6.7 per cent to $1,731. Many former Nova Scotians have moved back to Halifax with the intention of keeping their out-of-province job.

Gatineau was second with monthly rent up 3.8 per cent.

British Columbia cities with month-over-month rent increases were Victoria at 2.9 per cent; Vancouver at 2 per cent and Burnaby at 0.2 per cent.

In Alberta, Red Deer (3 per cent); Calgary (2 per cent) and Edmonton (1.4 per cent) had monthly average rent increases. 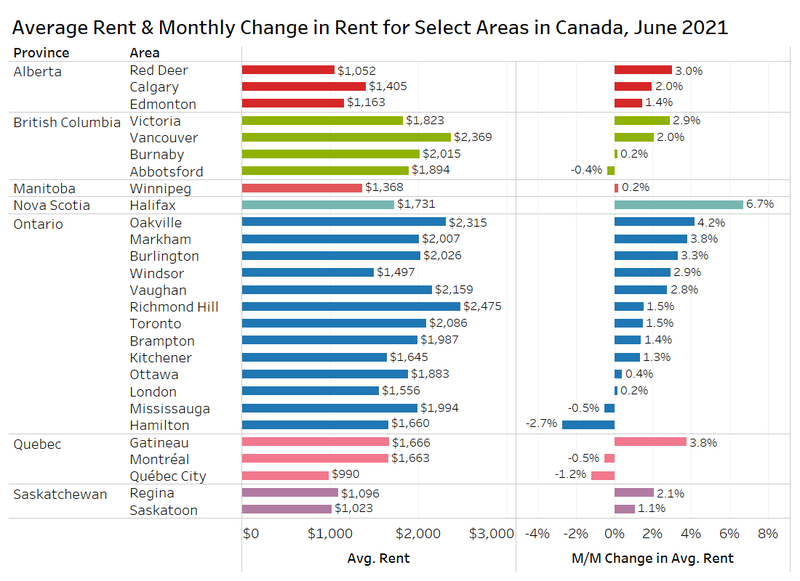 Eleven of the 20 neighbourhoods have seen average rent increases for condominium rentals and apartments from a low point of the market in February to June. The highest rent growth in June vs. February was around 8 per cent in Yonge-St. Clair, The Annex, The Waterfront Communities, and Wallace Emerson.

“After unprecedented declines during the pandemic, the domestic rental market is in recovery mode with many of Canada’s largest cities seeing rent growth accelerate in June,” said Ben Myers, president of Bullpen Research & Consulting. “Unit showings are picking up, vacancies are declining and tenant demand is strong again in major downtown markets. However, it still could take eight to 15 months before most markets get back to their peak rent levels from late 2019.”