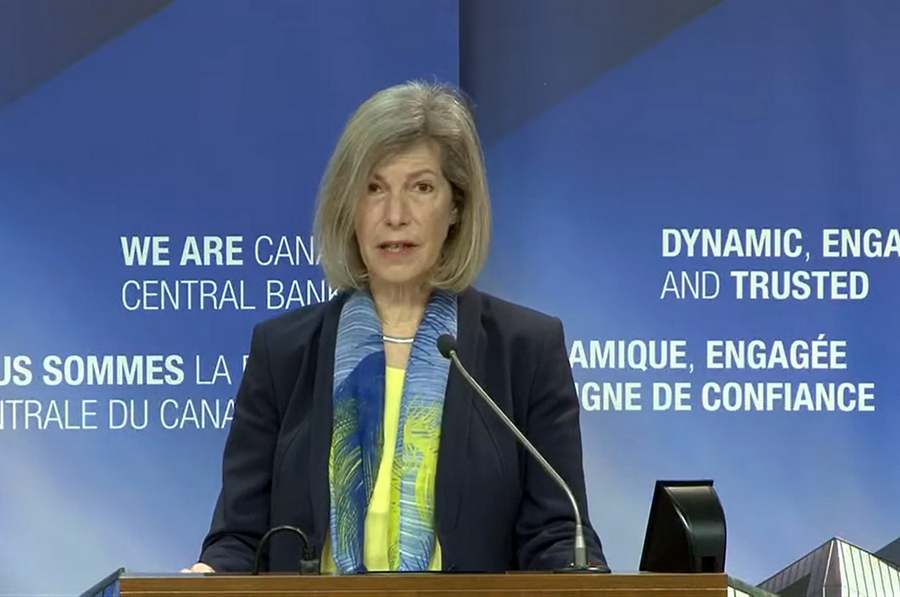 OTTAWA – The Russian invasion of Ukraine is adding to inflationary pressures around the world and in Canada, a senior Bank of Canada official said Friday.

In a speech by webcast to a conference at the U.S. Federal Reserve Bank of San Francisco, deputy governor Sharon Kozicki said inflation in the near term is expected to be higher than the central bank projected in January due to the surge in prices for oil and other commodities.

“A key concern for us is the broadening of price pressures – around two-thirds of the components in the consumer price index are now exhibiting inflation above three per cent,” Kozicki said in the prepared text of her speech.

The Bank of Canada’s next interest rate announcement is set for April 13 when it will also update its quarterly economic forecast.

Kozicki said she expects the pace and size of the rate increases to come and the bank’s plan to allow its holdings of Government of Canada bonds to shrink will be key parts of the central bank’s deliberations.

The Bank of Canada raised its key interest rate target by a quarter of a percentage point to 0.5 per cent earlier this month in a first move to help fight inflation. The central bank has said that higher rates will be needed as it works to bring inflation, which sits at a three-decade high, back under control.

Statistics Canada reported earlier this month that the annual pace of inflation in February climbed to 5.7 per cent, up from 5.1 per cent in January.

In her speech, Kozicki said the pandemic has had an uneven impact on households with low-wage workers, especially women and young people, being the hardest hit.

Kozicki noted that the bank has been working to build its ability to better understand the range of household experiences across the Canadian economy.

“Most people who could work from home kept their jobs and saw little or no interruption to their income. Meanwhile, measures to contain the virus hit some services – such as restaurants, accommodation, travel and entertainment – especially hard,” she said.

“Many people in these sectors lost their regular sources of income. The impact was most severe for low-wage workers, especially women and young people, with child care challenges exacerbating the situation for many women.”

And now, those with low incomes are also being hit especially hard by inflation.

“With everyday items such as gas and groceries facing some of the fastest price gains, all households are affected by high inflation. But my colleagues and I are mindful that this is especially painful for those with low incomes, because they tend to spend a greater share of their earnings on such items,” Kozicki said.

Bank of Canada deputy governor Sharon Kozicki says central bank ready to act “forcefully” to curb inflation. “Inflation in Canada is too high, labor markets are tight and there is considerable momentum in demand” On WSJ wires.

BOC’S DEP. GOV. KOZICKI: HIGH INDEBTEDNESS COULD AMPLIFY THE IMPACT OF RISING INTEREST RATES, AND IT COULD ALSO WORSEN THE IMPACT OF A FUTURE SHOCK.

Bank of Canada deputy governor Sharon Kozicki: “It’s important to be clear that returning inflation to the 2% target is our primary focus and unwavering commitment. We have taken action and will continue to do so to return CPI to target, and we are prepared to act forcefully.”

What a stunning ascent in Canada’s 5yr yield, now at 2.40% and counting.

My daily bond data only goes back 22 years and in that time there’s never been a 15-day surge in yields like this.

All banks up again by the weekend

This week’s 25 bps jump in the lowest nationally-available 5yr fixed rate was its biggest one-week move in months.

Capped rates (i.e., pricey but guaranteed long-term rate holds offered to buyers of new construction closing 12 to 36 months out) have rarely been this easy a sell.

Wasn’t that long ago the bond market was pricing in 200 bps of @bankofcanada rate hikes over the entire tightening cycle.

Meanwhile, a straw poll of lenders suggests roughly half of borrowers are still choosing variable mortgages.

I often say that the era of “Central bank is your friend” is over. Inflation is absolutely a game-changer.
My view comes directly from BoC, look at their messaging.

Don’t be surprised if they hike against slowing housing, rising defaults, or unemployment.https://t.co/TnncBy8rZN pic.twitter.com/jb687GpvC3

The bulk of Canada’s money supply growth since the pandemic has been created via residential mortgage loans. pic.twitter.com/7olMnGvrGn

The Price-to-Rent Ratio is another measure used to indicate over/undervaluation.

This measure may be interpreted as the cost of owning versus renting a house.

On both measures, within the OECD, Canada is No. 1! pic.twitter.com/EPXecEUY8z

This is not oil, a meme stock or even a shitcoin. It’s U.S mortgage rates pic.twitter.com/RLx8wbg56K