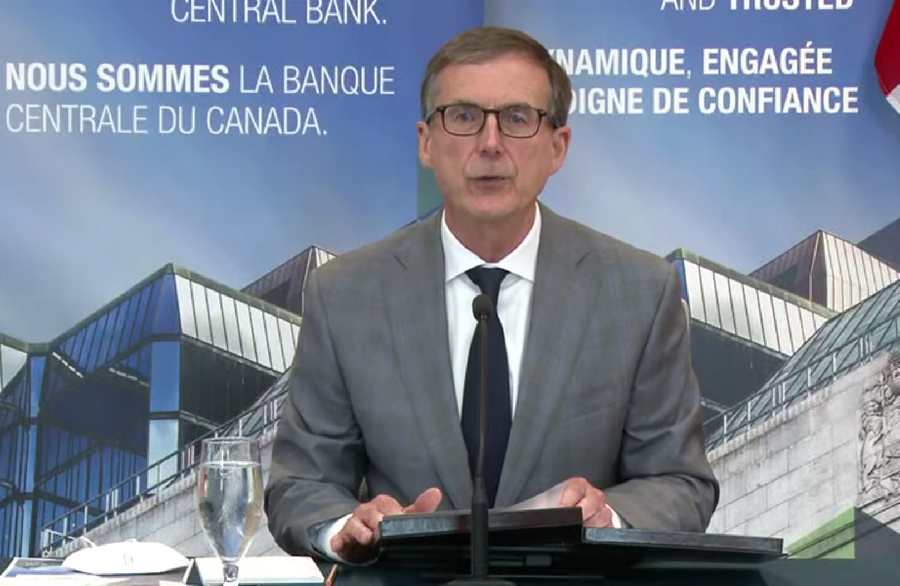 OTTAWA – The Bank of Canada raised its key interest rate by a full percentage point on Wednesday, marking the largest single rate hike since August 1998.

The central bank’s decision signalled a more aggressive approach to bringing skyrocketing inflation, which hit a 39-year-high of 7.7 per cent in May, back down to its target of two per cent.

“Inflation is too high, and more people are getting more worried that high inflation is here to stay,” Macklem said.

Macklem said higher interest rates will add to the difficulties that Canadians are already facing with high inflation but that if inflation becomes entrenched it will be more painful for the economy – and for Canadians – to get it back down.

In its latest monetary policy report, the Bank of Canada said inflation in Canada is “largely the result of international factors,” but that “domestic demand pressures are becoming more prominent.”

Most economists had forecasted a rate hike of three-quarters of a percentage point.

Tu Nguyen, an economist with accounting and consulting firm RSM Canada, said that while the rate announcement may have come as a surprise, it isn’t unreasonable given the rate of inflation, rising inflation expectations and the tight labour market.

“As unsettling as this news is for consumers and businesses alike, an economy-wide recession is still unlikely in 2022,” said Nguyen, adding that economic indicators still point to a healthy economy.

After raising interest rates by half a percentage point in June, Macklem said the central bank “may need to move more quickly” to bring inflation down.

The rate hike Wednesday brings the Bank of Canada’s target for the overnight rate to 2.5 per cent and is expected to prompt the commercial banks to raise their prime rates which will increase the cost of loans linked to the benchmark such as variable rate mortgages and home equity lines of credit.

In a note, CIBC senior economist Karyne Charbonneau said the Bank of Canada raising its key rate to a peak of 3.25 per cent is now more likely.

“With the Bank of Canada qualifying this larger step than anticipated as ‘front-loading,’ we still believe they could stop at three per cent, but the risks that the peak reaches 3.25 per cent have increased,” Charbonneau said.

The central bank said the largest drivers of global inflation are the Russian invasion of Ukraine and ongoing supply disruptions, leading to higher global energy and food prices.

Inflation in the U.S. soared to a new four-decade peak in June. Consumer prices rose 9.1 per cent compared with a year earlier, the government said on Wednesday.

Statistics Canada is expected to release Canada’s inflation data for June on July 20.

That excess demand is allowing businesses to pass more of their cost increases on to consumers, the bank said.

The unemployment rate fell to a record-low of 4.9 per cent in June as businesses continue to struggle with an ongoing labour shortage.

The central bank is also citing concerns about rising inflation expectations among consumers and businesses. Economists generally worry when people begin expecting high inflation, as those expectations then feed into future prices set by business and wage negotiations.

“The bank is guarding against the risk that high inflation becomes entrenched because if it does, restoring price stability will require even higher interest rates, leading to a weaker economy,” said the central bank.

It’s also forecasting inflation will remain at eight per cent over the next few months and begin to decline toward the end of the year and reach its target rate in 2024.

“The governing council continues to judge that interest rates will need to rise further,” the Bank of Canada said in its decision, adding that the pace of these rate hikes will depend on the central bank’s assessment of the economy and inflation.

Bank of Canada becomes the first G10 Central Bank to hike interest rates by 100 bps in this cycle !

By the way, only 1 out of the 30 economists surveyed by Bloomberg projected a 100 bps hike.#inflation2022 #CPIInflation

The Bank of Canada panicked today with its 100 beeper (!) and the yield curve has inverted. The housing bubble can be assured now of bursting and likely in spectacular fashion. The Canadian dollar popped on the rate hike, but the coming recession makes it a hard “sell.”

Bank of Canada hikes interest rates by a monster 100bps. Huge implications for the mortgage market as variable rates get repriced.

A conventional Variable Rate Mortgage is now between 3.85% and 4.20% (shop around)

This Prime increase is brutal for house sales

We are entering a place where the math doesn't work

Now our attention switches to the September Prime Rate Announcement

Yep….. this can and likely will gets worse in 6 weeks

Wise play by Macklem & co.—despite the bearishness for housing.

With a stunning 9.1% US CPI print, likely 8%+ ahead for Canada & growing risk of an inflation semi-panic, the BoC had to show who's in charge.

Markets are now pricing in a 70% chance of another 75 bp hike on Sept 7 https://t.co/ahfagksoFm

This will be memorialized one day pic.twitter.com/jOun7SF5ZK

Ok folks, Bank of Canada just shocked by raising by 100 bps. USD/CAD is a sell anywhere above 1.3000 now. Anyone that fails to realize BOC will hike regardless of damage to housing just got a wake up cal. pic.twitter.com/OcJJFT7V0f

tl;dr Bank of Canada on inflation and hitting the target of 2%.

6%: You're looking at the wrong numbers

8%: "inflation is too high" and if it gets higher a soft landing won't be possible