OTTAWA – The Bank of Canada says it’s staying put on interest rates as it gauges the extent of the damage that deepening trade conflicts are having on the domestic and global economies.

The rate decision Wednesday kept the central bank’s overnight rate at 1.75 per cent and followed a solid second-quarter rebound for the Canadian economy. 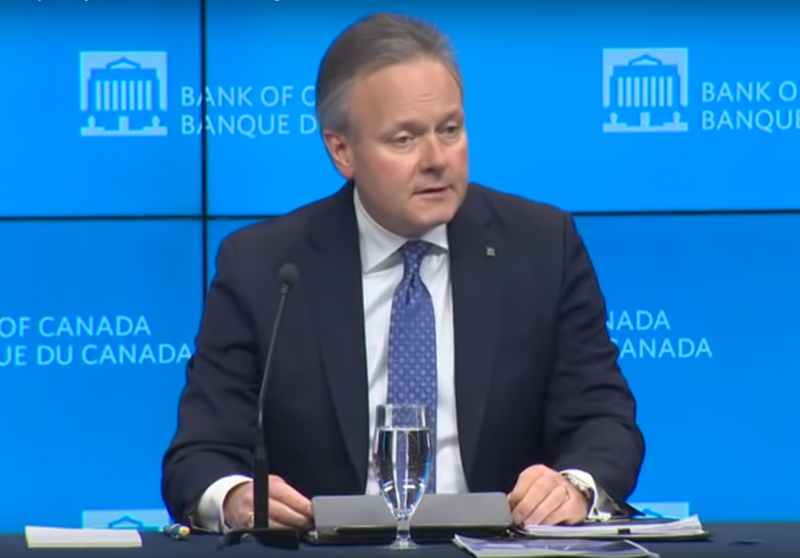 The announcement came as other central banks around the world have been signalling or taking policy action – including interest rate cuts – to respond to expanding trade risks and the deteriorating global economy.

Heading into the announcement, governor Stephen Poloz was widely expected to leave the rate unchanged, though some had expected the bank to give indications that a policy move could be on the way. Many analysts have predicted the bank will lower rates at its next rate announcement on Oct. 30 when it will also release its updated outlook for the economy as part of its fall monetary policy report.

The central bank said the current level of policy stimulus remains ”appropriate” as it monitors evolving international conditions ahead of next month’s policy decision.

”Canada’s economy is operating close to potential and inflation is on target,” the bank said in its first public statement since July 10.

”However, escalating trade conflicts and related uncertainty are taking their toll on the global and Canadian economies.”

The central bank’s statement Wednesday said the intensification of the U.S.-China trade war is ”weighing more heavily on global economic momentum” than it had projected in July.

At home, the bank said some of the unexpected strength in the second quarter will likely prove to be temporary and it predicted economic activity to slow in the second half of 2019

The solid growth was fuelled by rebounds in energy production and exports, it said. Housing activity also bounced back faster than anticipated although the bank warned it could pile more debt onto already stretched households.

The statement noted that while wages have increased, consumer spending was unexpectedly weak in the second quarter.

Among the weak spots in the data, the bank pointed to a sharp contraction in Canadian business investment that coincided with the increased trade tensions.

”As the bank works to update its projection in light of incoming data, governing council will pay particular attention to global developments and their impact on the outlook for Canadian growth and inflation,” said the bank, referring to next month’s rate decision and monetary policy report.

On Thursday, Bank of Canada deputy governor Lawrence Schembri will provide more detail about the governing council’s thinking when he gives a speech and holds a news conference in Halifax.

With the stronger domestic data, the central bank has an opportunity to ”wait and see” how the latest round of U.S.-China trade talks unfold before they give a nod to any policy response, said Alicia Macdonald, principal economist for the Conference Board of Canada

”As we’ve seen over the past few months, the situation on the global trade front is pretty fluid. Things… can change every hour sometimes,” Macdonald said in an interview.

”I think they don’t want to commit themselves one way or the other at this point because we just don’t how the forthcoming trade talks between China and the U.S. will play out.”

Douglas Porter, chief economist of BMO, wrote in a report to clients that he still predicts a rate cut at the Oct. 30 meeting.

Porter said over the next eight weeks the bank will assess two full months worth of jobs and inflation reports, and consider the impact of another likely rate reduction by the U.S. Federal Reserve.

”Clearly, much will ultimately depend heavily on how the US-China trade war plays out; but, given that we are not optimistic on that front, we lean to a rate cut in late October,” he wrote.

The bank’s decision Wednesday kept the rate at 1.75 per cent for seventh-consecutive policy meeting. The Canadian economy experienced an abrupt deceleration over the winter that nearly brought growth to a halt.

Last week, a report from Statistics Canada said the economy expanded at an annualized pace of 3.7 per cent in the second quarter, which was higher than the Bank of Canada’s projection of 2.3 per cent.