OTTAWA – The economy appears to have avoided a worst-case scenario due to the COVID-19 pandemic, the Bank of Canada said Wednesday as it kept its key interest rate steady at its lower bound.

The bank left its target for the overnight rate unchanged at 0.25 per cent, which it has said is as low as it will go.

The bank also tinkered with some programs designed to ease the flow of credit, pointing to improving indicators in the market and the economy overall.

Overall, the central bank said Wednesday it believes the impact of the pandemic on the global economy has peaked, but hedged the outlook by warning of a high level of uncertainty about how the recovery will unfold.

Since the pandemic struck Canada and public health restrictions put a freeze on the economy in March, the country has seen historic drops in jobs and output.

The most recent federal figures on a key benefit for workers now show nearly 8.4 million people have applied for the Canada Emergency Response Benefit.

The figures are used a proxy for the overall labour market, because the benefit is paid to anyone out of work or earning less than $1,000 a month due to COVID-19.

Statistics Canada’s look at the May jobs market is scheduled for Friday and forecasts are for further job losses on top of the three million lost over March and April.

The central bank also updated its GDP forecast on Wednesday, seeing a decline between 10 and 20 per cent in the second quarter, compared with the fourth quarter of 2019, an improvement from the 15-to-30-per-cent drop in the quarter highlighted in the bank’s worst-case scenario in April.

The bank expects the economy to grow anew in the third quarter of the year, crediting government spending and lower interest rates for ”buffering the impact of the shutdown” and creating the foundation for a recovery. Even so, it noted the outlook for the second half of 2020, and after, ”remains heavily clouded.”

”Anybody who believes we’ll have a V-shaped recovery is, I think, grievously mistaken,” Perrin Beatty, president of the Canadian Chamber of Commerce told a Senate committee Tuesday.

He said getting the economy going again will require a strategy ”coherent across provincial and territorial boundaries” and takes into account public health concerns to manage the pandemic, so businesses, workers and consumers feel “that it’s safe to do business again.”

How the central bank plays a role in the recovery will fall to Tiff Macklem, who began his tenure as governor on Wednesday, taking over from Stephen Poloz whose seven-year term ended Tuesday.

Macklem participated as an observer during deliberations by the bank’s governing council over the past few days, the statement said, adding the new governor ”endorses the rate decision and measures announced.”

CIBC senior economist Royce Mendes said it may not be too long until Macklem puts his stamp on bank policy, ”with a lot of work still left to be done to bring the economy back to life.”

The next rate announcement is scheduled for mid-July, at which time the central bank will provide an update to the economic outlook it delivered in April.

”Given the high level of uncertainty, it’s wait-and-see on the economy,” BMO’s Benjamin Reitzes wrote in a note about the rate decision. ”If Governor Macklem has any new ideas, he’ll have to wait for the July meeting.”

The central bank also said Wednesday that it was reducing the frequency of its term repo operations and purchases of bankers’ acceptances, citing improvements in short-term funding conditions.

Other programs to purchase federal, provincial, and corporate debt will continue unchanged, it said, but added it could change tactics in response to economic conditions. 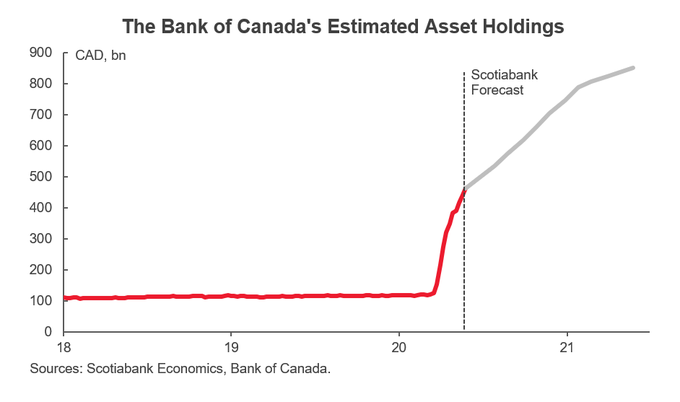 ”As market function improves and containment restrictions ease, the bank’s focus will shift to supporting the resumption of growth in output and employment,” the statement said.

”The bank maintains its commitment to continue large-scale asset purchases until the economic recovery is well underway.”

This report by The Canadian Press was first published June 3, 2020.