OTTAWA – The bank of Canada provided a rosy revision to its economic outlook Wednesday but kept its key rate at 0.25 per cent in a sign that it won’t count its chickens before they hatch.

The improving conditions are why the bank also said Wednesday it will ease off federal government bond purchases that form part of its quantitative-easing program designed to aid the economy during the pandemic. 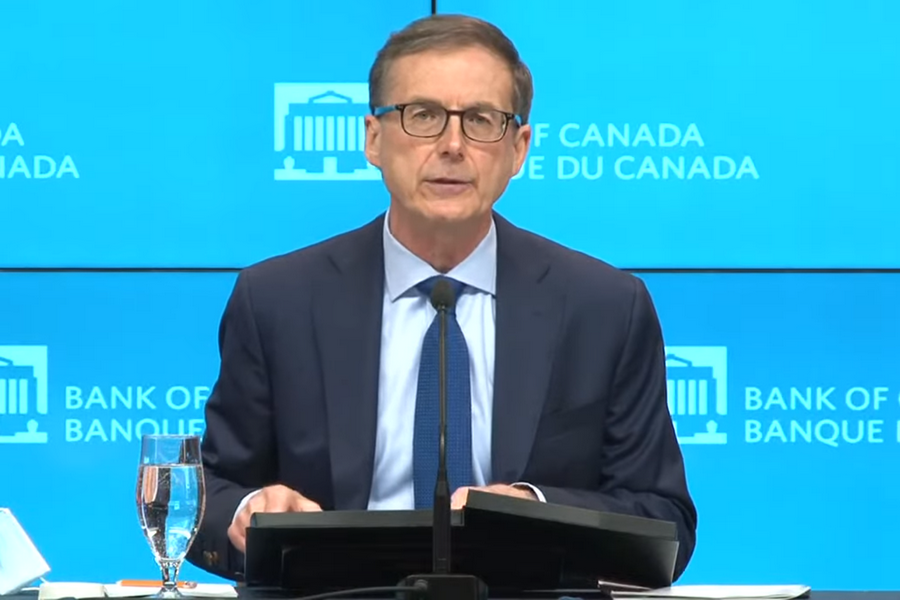 And it pulled forward its expectations for when the economy will be strong enough to handle a rise in rates. The bank now sees that an inflation back at its two per cent target later in 2022, rather than some time in 2023.

But first the economy faces a test in the form of the deadly third wave of the COVID-19 pandemic, which the bank said threatens the pace of the recovery and growth in the jobs market particularly highly affected sectors.

Bank of Canada holds key rate unchanged at 0.25%. Forecasts Canada’s economy to grow 6.5% in fiscal 2021, 3.75% in 2022 compared to government’s budget projection of 5.8% and 4%. Bank says growth not expected to increase pressure to boost rates due to excess capacity in economy.

Governor Tiff Macklem said much will rest on whether households and businesses show the same resiliency as they did during the second wave of the pandemic at the start the year.

“Vaccines are rolling out, and there are brighter, brighter days ahead and reflecting that we have revised up our outlook,” Macklem said during a late-morning press conference.

“But … it is still going to take some time to get to a complete recovery. This third wave is a setback. It is straining health-care systems in part of the country.”

He added that the hardest-hit sectors of the economy will be most affected.

“Effective the week of April 26, weekly net purchases of Government of Canada bonds will be adjusted to a target of $3 billion”

The effect will be sharpest on high-contact sectors like restaurants, the bank said, adding that the ripples will prolong the unevenness in the labour market’s recovery from historic job losses one year ago.

The bank said it expects tighter restrictions during this third wave of COVID-19 to lead to job losses, mostly in low-wage and part-time work, as part of a material, but temporary effect on the economy.

It will take time for jobless Canadians and those looking to join the labour force to find work, which the bank said may lead some households to hold on to the savings accumulated over the past year as a safety net instead of spending them all at once.

On average, Canadians have accumulated $5,800 in extra savings through the pandemic

“We really need to be careful about averages when it comes to this recession because it has been so uneven,” Finance Minister Chrystia Freeland said Wednesday at an event hosted by the Canadian Chamber of Commerce.

Freeland said she wanted employment and the economy’s capacity back to, and then above, pre-crisis levels as fast as possible.

Meanwhile also Canada: ‘National prices, as measured by the Home Price Index, were up 20.3% compared to the same month last year, according to the Canadian Real Estate Association’ https://t.co/JrngCM8gv8

Consumers will also appreciate the rise in inflation that’s totally not going to impact you, because last year saw no inflation.

It’s just base effect… only grocery, cars, homes, rents, tuition, medicine, and various other things you use daily went up in price. 😂

Based on employment figures for March, the central bank estimated that about 300,000 more people would need to be hired to get back to pre-pandemic levels, or 475,000 when factoring in population growth.

Macklem said the bank would keep a close eye on the labour market among a range of indicators before deciding when the time was right to raise rates.

“You’re seeing a recession and recovery like we’ve never experienced before,” Macklem said, adding later: “We’re looking for a complete recovery, and that’s going to take some time.”

Good luck trying to unwind QE, let alone raise interest rates. Any sell-off in the markets will put a hard stop on removal of stimulus.

I’m so old I remember when central banks pretended to be data dependent. https://t.co/Fzx3eEVkl5

The bank’s prediction for economic growth this year of 6.5 per cent, fuelled by consumer spending, is 2.5 percentage points higher than its last quarterly outlook and above the 5.8 per cent predicted in Monday’s federal budget.

Freeland said she was confident in the GDP projections based on a survey of private sector economists. She called the figures prudent and reasonable.

The Bank of Canada’s forecast doesn’t take into effect the full suite of stimulus outlined in the federal budget. It baked in $85 billion in new spending, rather than the $101 billion over three years the Liberals promised in Monday’s budget.

Macklem said the stimulus from federal and provincial governments would help drive growth in the coming years, but not have an impact on inflation.

Inflation is expected to hover at the top range of the bank’s comfort zone, but only because prices now are being compared with the weak levels seen one year ago at the onset of the pandemic.

Statistics Canada said Wednesday the consumer price index in March was up 2.2 per cent compared with a year ago, noting the year-over-year impact that should continue for the next few months.

Macklem also expressed concern about the heated housing market. He said the bank’s worry is that people decide to buy on speculation that prices will rise indefinitely and that they will overstretch themselves financially.

He welcomed a proposal by a federal bank regulator to tighten its stress test for uninsured mortgages. Macklem also said a federal budget pledge to place a tax on vacant home owned by non-Canadian residents should temper speculation and add supply so it can begin catching up with demand.

– With files from Lee Berthiaume

In the aftermath of the cheerleading BoC press statement, the futures market has gone ahead and priced in a 3% policy rate peak. This takes out the 1.75% peak of the last cycle — not to mention something we haven’t seen in 13 years!

“We welcome the recent proposal by the super intendant of financial institutions to introduce a fixed floor to minimum qualifying rate for uninsured mortgages.”

“New measures just announced in the federal budget will also be helpful.”

Bank of Canada on real estate:

“Housing construction and resales are at historic highs, driven by the desire for more living space, low mortgage rates, and limited supply. The Bank will continue to monitor the potential risks associated with the rapid rise in house prices.”

My advice: with the Bank of Canada in particular, listen to the Governor speak, read the Monetary Policy Report. There is more nuance than often seen in first headlines.

CIBC’s Avery Shenfield: “Maybe the @bankofcanada , like so many of us, has a case of Covid fatigue, as its gone from being generally in the more pessimistic camp at points over the past year, to a much more optimistic take.” CIBC now sees rate hike in 22Q4.

Bank of Canada are predicting the need for much earlier interest rate hikes than the US Federal Reserve (2022 vs 2024). Raises the question as to what is worrying the Fed given better growth, employment and a much stronger fiscal stimulus in the US versus Canada. https://t.co/WGtouvVg5G

1 BMO: The #BankofCanada has made a drastic U-turn in the space of three months from being extremely cautious to be being extremely upbeat. While there’s still some ways to go until we get a move on rates, the #BOC has taken the first step toward exiting #QE . . #cdnecon pic.twitter.com/YHPUuEb0rw

So, as I’ve said many times, the Bank of Canada will likely be a ‘pseudo’ average-inflation targeter insofar as there will be some make up inflation after slack is absorbed.

Not all that different than an actual average-inflation targeting central bank, like the Fed.#cdnecon

Residential properties in the province of Quebec sell in record time in the first quarter of 2021: report