OTTAWA –  The Bank of Canada’s unprecedented actions in response to the pandemic have helped hard-hit workers, but governor Tiff Macklem said Thursday that the measures may have increased economic inequality at the same time.

During a speech to students at Atlantic Canadian universities, Macklem said the central bank will take a look at its bond-buying programs and drop to its key policy rate to see if they have had unintended consequences. 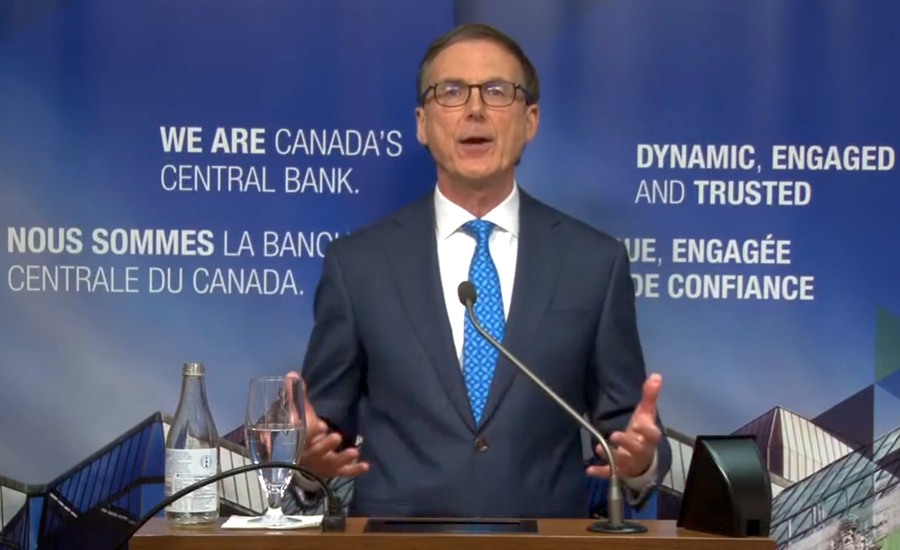 The Bank of Canada’s bond-buying spree to snap up government debt has most recently been aimed at driving down interest rates charged on things like mortgages and business loans to prod spending.

Known as quantitative easing, Macklem noted it also comes with another effect: raising the value of assets in registered retirement savings plans, company pension plans, and other investment holdings.

That can benefit wealthy Canadians more than others, he noted.

Macklem said the central bank will study the program’s effects to understand how bank actions during the pandemic have affected income and wealth inequality.

We will look closely at the outcomes of QE here and elsewhere and will work to more fully understand its impact on both income and wealth inequality.

As a broad tool, Macklem said he was confident it was helping to create jobs and get people back to work and helping drive a more inclusive economic recovery.

“It stimulates spending and gets people back to work, and that is the most important thing you can do to reduce inequality,” Macklem told a news conference following his speech.

It was about one year ago that Macklem was named the next governor of the Bank of Canada as the central bank was taking unprecedented policy actions to aid the economy.

Its key policy rate was lowered to 0.25 per cent, where Macklem said it will stay until the economy is fully recovered and inflation is back at the bank’s two per cent target zone.

The bank recently scaled back federal bond purchases and is winding down other purchasing facilities now that economic conditions are improving.

Years of low and stable inflation haven’t made us complacent about the potential threat these groups face.

CIBC senior economist Royce Mendes said if Macklem thinks quantitative easing is adding to inequality, it might be among the reasons the bank tapers purchases in the coming months.

Macklem said the rising tide has not lifted all boats.

Statistics Canada’s most recent jobs report showed the country was short about 503.100 jobs from pre-pandemic levels witnessed in February 2020, but suggested the gap may be larger, closer to 700,000 if the workforce was to keep pace with population growth.

Macklem said new graduates and mothers returning from parental leave, among others, have entered or re-entered the labour market through the course of the pandemic.

He said creating an inclusive economic recovery may not just be about getting the country back to where it was pre-pandemic, but creating more jobs and ensuring places for those hardest hit.

In his speech, he pointed to high-contact service sectors like retail and restaurants whose output is almost 20 per cent below pre-pandemic levels, just as the combined output of the rest of the economy is slightly above pre-pandemic levels.

“The pandemic makes fostering an inclusive economy more important than ever. We won’t fully heal the economy until we address these unequal impacts,” Macklem said in his speech.

In Q&A period, University student just asked BoC’s Macklem, “if lumber costs 250% more year-over-year and house prices are up 24% is it safe to say inflation is still 2%??”

Pretty sure this kid just lost his scholarship.

“And rather than just trying to recover to where we were before the pandemic, maybe we can bring the economy to a better place for everyone.”

To do that, he suggested companies focus on hiring women, Indigenous people, racialized Canadians and people living with a disability who have borne the brunt of job losses.

Drawing those workers into the labour market can help companies make better decisions and boost the economy’s potential output through a cycle of more income followed by demand for goods and services.

He acknowledged the central bank has to do its part as well, noting the need to improve diversity at the senior ranks of the organization.

The bank’s governing council lost its lone woman late last year when Carolyn Wilkins stepped down as the senior deputy governor. The process to replace her has been underway for months, though Macklem wasn’t able to provide more specifics about the search.

Trudeau and Freeland had the chance to finally overhaul a deeply flawed housing policy. Instead, they did the minimumhttps://t.co/xAAEqfYxkN

A lot of people blame the Bank of Canada’s monetary policy (low rates, QE etc) for the 30% increase in house prices in Canada.

But if monetary policy is the main driver, then why are US house prices up only 12% given the Fed has taken similar actions?https://t.co/Z8vE6AWlT0

The Housing Crisis was in 2009.
The Fed’s acting like we’re still in the middle of one when we’re not.
There is zero economic justification or even a reason compatible with the Fed’s mandate to keep buying MBS.

Yet they do, again contributing to a housing bubble.#reckless pic.twitter.com/KO7brQvISn

WHAT HAVE I BEEN SAYING?

Seriously, when is the Fed held to account for the consequences of their policies instead of getting away with lying to the public year after year?https://t.co/TzdP3AM593

You know where I stand on the Fed & Powell & their denials on exacerbating wealth inequality & the danger of the insane asset bubble they have created.

The secret is out. It can no longer be denied.
The Federal Reserve is the greatest engine of inequality.
Why you should care:https://t.co/DWegnM1NrR

This report by The Canadian Press was first published May 13, 2021.