A large black granite disc commemorating the Colonial Tavern will return to Yonge St., as a permanent landmark on the site of the iconic jazz club. Spearheaded by the Downtown Yonge BIA as part of its Music Strategy, and MOD Developments, the granite disc is a celebration of Toronto’s musical heritage. 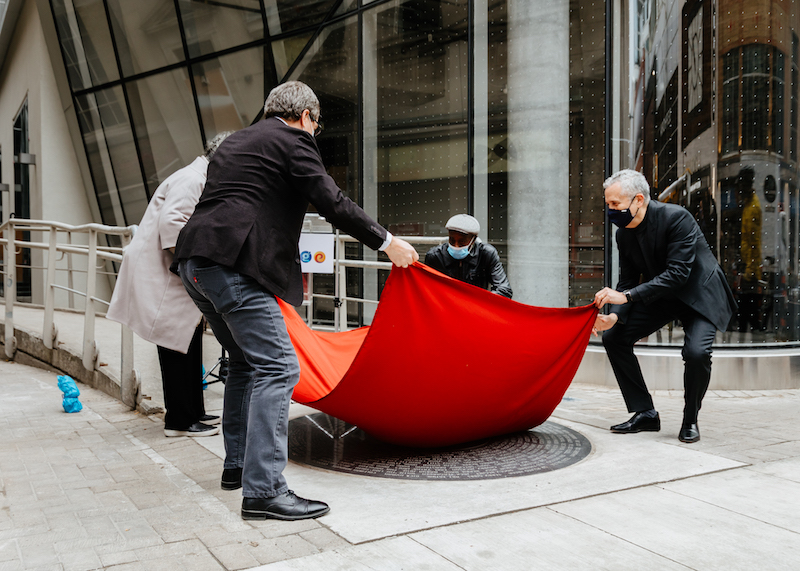 “We are delighted to commemorate the Colonial Tavern, which was a mecca for music fans for decades and helped create Toronto’s still-vibrant music scene,” says Mark Garner, Chief Operating Officer and Executive Director of the Downtown Yonge BIA. “We may not be able to preserve the buildings, but we can certainly celebrate the memories.”

The Colonial Tavern stood at 201 Yonge St. from 1947 until the late 1970s before it was bought by the City of Toronto and subsequently torn down in 1987. To celebrate the legacy of the Tavern, in 1996, a record-shaped black granite disc was commissioned, inscribed with the names of 175 music greats who played at the famed club — including a who’s who of jazz legends such as Duke Ellington, Dizzy Gille- spie, Miles Davis, Ella Fitzgerald and Canada’s own Oscar Peterson.

Originally, the monument stood in a parkette where the Colonial had once been. However, when the City sold the site along with the historic 1905 Canadian Bank of Commerce building to Parasuco Jeans in 1999, the disc went to a City Works yard. As of October 29, 2020, the disc will permanently return to its new home in front of MOD’s recently completed Massey Tower condominium development.

“We were surprised – and thrilled – to discover that the disc still existed,” says Gary Switzer, Chief Exec- utive Officer of MOD Developments. “It is a natural, beautiful and historical addition to the property. It took a lot of work to integrate the disc into the streetscaping, but it was worth it. It’s a wonderful complement to the restoration work we did to the heritage bank building.”

“We think it’s important to celebrate the history of music on this block,” adds Noorez Lalani, President of MOD Developments. “Our Massey Tower development included the donation of the Victoria Street frontage to Massey Hall, perhaps the most iconic music venue in Toronto, which allowed them to under- take their current $140M revitalization.”