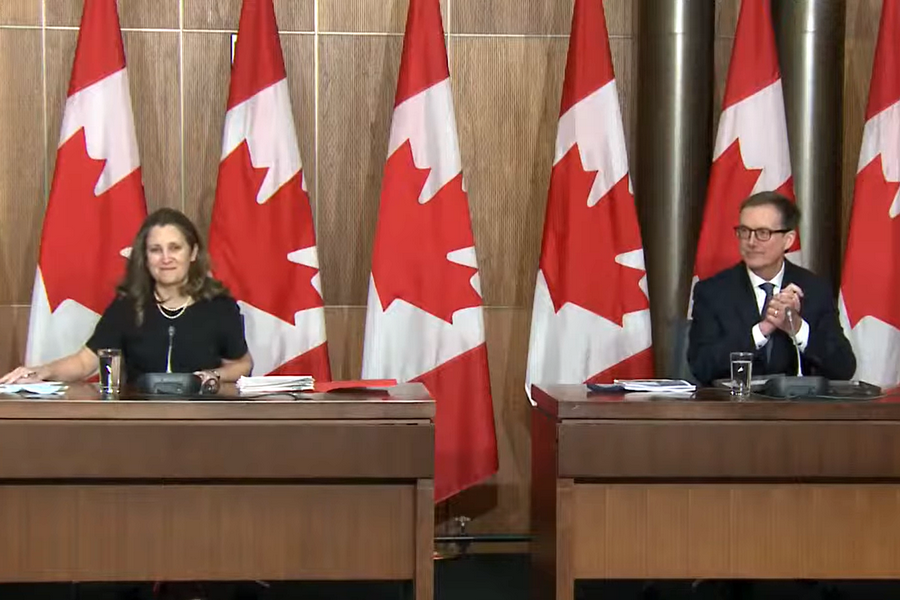 OTTAWA – Canada’s central bank has been told to keep the annual pace of price gains at its historic target, but also to help build up the labour market.

Since 1991, the Bank of Canada has targeted an annual inflation rate of between one and three per cent, often landing in a sweet spot at two per cent.

That range remains at the centre of the renewed inflation-targeting agreement with the federal government.

However, the new five-year deal outlines how the bank should consider how close employment levels are to the highest mark can hit before fuelling inflationary problems.

The bank may decide to allow inflation to sit at closer to either end of the bank’s target range for short bursts as it determines when the labour market hits its full potential.

It also could mean that the central bank keeps its trendsetting interest rate at the lowest level possible for longer stretches to help the economy recover from a downturn.

“This agreement provides continuity and clarity, and it strengthens our framework to manage the realities of the world we live in,” Bank of Canada governor Tiff Macklem said in a statement.

“This is the framework we need now as we confront elevated inflation and the challenges of reopening the economy. And it is what we need looking ahead beyond the pandemic.”

The Bank of Canada’s key policy rate since the start of the pandemic has been at 0.25 per cent, lowered there to prod spending during the COVID-19 induced downturn and subsequent rebound.

As it stands, the bank doesn’t see a rate bump until April 2022 at the earliest.

Under the agreement unveiled Monday, the central bank says the rate may more often hit that rock-bottom level, and remain there for longer if the bank believes it will help get inflation back on target.

Documents released by the bank say that a low-for-longer rate environment boosts the likelihood that inflation could overshoot the two per cent target as the economy recovers.

Rate hikes would only happen after inflationary pressures build, but not before inflation hits two per cent.

PHOTOS | Finance Minister Chrystia Freeland arrives at a press conference with Governor of the Bank of Canada, Tiff Macklem, to announce the Bank of Canada’s inflation mandate on Dec. 13, 2021. #cdnpoli pic.twitter.com/MrBkGXDUnl

The Government of Canada added soft job market goals to the Bank of Canada’s mandate today, granting operational discretion to hold interest rates at emergency low levels and run inflation as high as 3% if the economy is below “sustainable” full employment#cdnecon

These, and broadly assessing labor market indicators, are all of course part of the Bank of Canada’s operations in practice, just now they’re written down formally in the official document.

The Bank of Canada renewed the inflation target it will ignore.

As well, rate increases could be more gradual than in the past as the bank figures out if it has properly estimated the full potential of the labour market, meaning that inflation could again rise above the bank’s target.

Macklem and other senior central bank officials have repeatedly spoken of the need for the labour market to heal from the wounds caused by COVID-19 before the bank would rein in its economic stimulus, even as annual inflation rates have recently crept up.

The central bank says that figuring out when the country has hit “maximum sustainable employment” can’t be nailed down to one number, nor easily defined in a labour market being affected by a greying workforce and increased digitization.

The bank plans to outline what labour market markers it is monitoring and detail those as part of its regular rate announcements.

Bank of Canada renews its mandate that keeps a 2% inflation target, and explicitly introduces the need to consider the labor market https://t.co/zZ2VgbrC6h pic.twitter.com/Sgc15nSodn

It seems to have been a reluctant concession on the Bank’s party, given how long it took to negotiate — and how determined the Bank seems to be to downplay any change in its own messaging.

It’s probably the first, but neither is good.

That may make the Bank and/or the government less willing to tackle it. If economic agents sense that, they will be encouraged to act in ways that make it even more costly, ie bidding up wage and price demands. That need not be the case, but the odds on it have just shortened. https://t.co/rBL0wJAEGy

The key question is this:
Does targeting 2% inflation maximise (subject to constraints) sustainable/average employment?
Or would some other target do better?
(I happen to think an NGDP target would do better, but that’s an aside.) 1/n

Or whether it’s saying:
2. “We are going to target A & B, with unspecified weights on A and B, and God-only-knows-what perceptions of intertemporal trade-offs, so we can justify doing whatever we like.” 5/n

“Minimising climate change” is left as an exercise to the reader.
But “setting interest rates at 0% (real) forever, so we don’t discount the future”, or “tanking the monetary economy to drive us back to the Stone Age”, are not good answers. 7/7

The Bank of Canada’s new agreement with the government of Canada is a little goofy. https://t.co/zJJcuWuf4y

Demand is still strong in the Montreal CMA despite high prices: QPAREB