Altus Group’s latest commercial real estate report in the Calgary and Edmonton market areas reveal low investments for Q2 2019. Uncertainty remains as commercial investment volume in Calgary decreases by 26 per cent in the second quarter, while Edmonton investment levels saw a 41 per cent decline from the first half of 2018.

In Calgary, Q2 saw 99 sales transactions, totalling $426 million, bringing the total investment volume for the first half of 2019 to $1.2 billion.

The city’s investment volume was down 56 per cent from the same quarter last year. This was a reflection of both lower sales volume and deal count, with 99 transactions being the lowest quarterly total seen since Q2 of 2016. 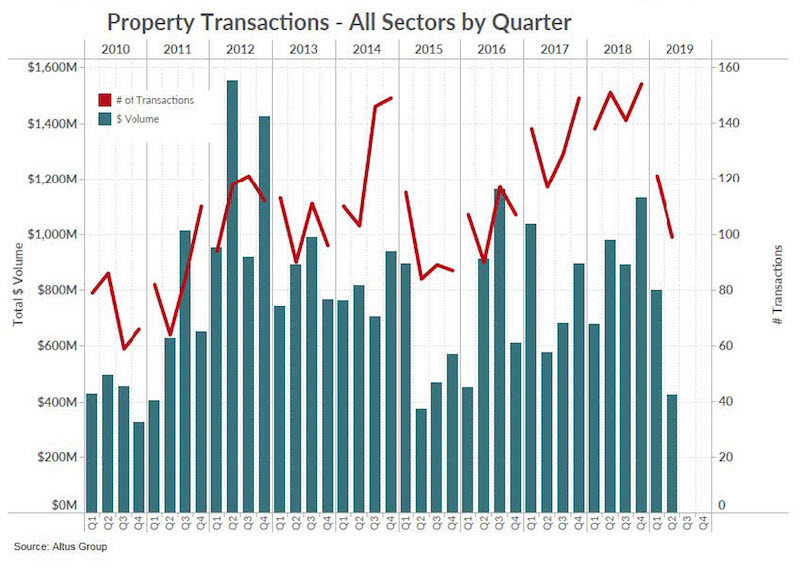 According to the Altus Group Investment Trends Survey, Calgary experienced an uptick in buy/sell momentum ratio from the previous quarter.

The largest portion of investor preference of asset went to the industrial and apartment sector at about 20 per cent each of the total investment volume, followed by the ICI and residential land sectors at 16 per cent each.

After posting four consecutive quarters of growth, and a record high of $287 million in Q1 2019, the industrial sector regressed in Q2 with 20 transactions representing $85 million in value.

Year-to-date volumes were still up 24 per cent from the first half of 2018. The largest sale of the quarter was 285062 Frontier Road, which was acquired by Guardian Capital Corp. for $17.4 million, according to Altus Group. 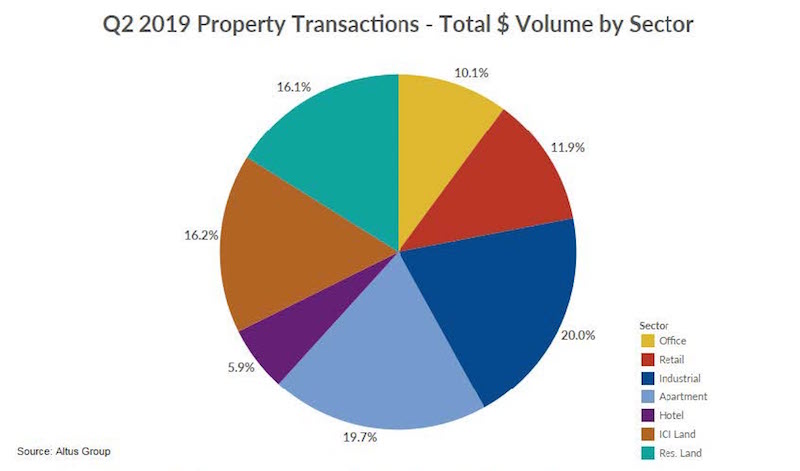 The report further states that the apartment sector increased by 54 per cent with 17 recorded transactions worth $84 million.

The top transaction of the residential land sector, which recorded a total of 12 transactions worth close to $69 million, was the Homes by Avi acquisition of the Calgary West Campground. The sector saw a 52 per cent drop from the same quarter last year.

The third most valuable transaction of the quarter was in the hotel sector. The Holiday Inn Canmore was acquired by 3G Equity Inc. for a price of $17.5 million or $176,768 per door.

Altus Group states that the sector has seen little investment over the past three years, as much of the activity has been concentrated on delivering new product to the market.

“While the second quarter results showed a steep decline in sales volume from the same quarter last year, it’s also noted that the investment totals for the market were only down by 26 per cent year-to-date compared to 2018. It appears that the market continues to remain in a holding pattern as we move into the second half of the year,” said Ben Tatterton, Manager, Data Solutions at Altus Group.

Q2 volumes in Edmonton represented a decrease of 62 per cent from the same quarter last year and the third straight quarter of decline from the high mark set in Q3 of 2018.

The Altus Group Investment Trends Survey suggests that the drop in commercial investment comes at a time when Edmonton exhibited an uptick in investor preference in Q2. 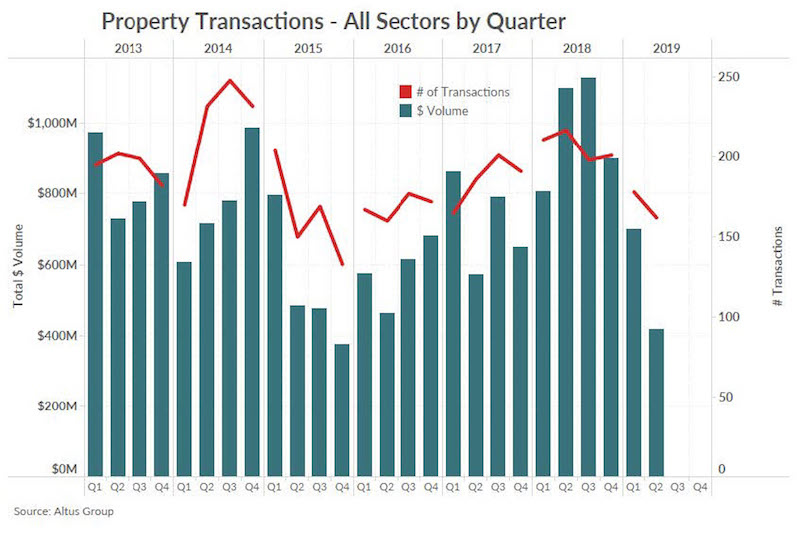 The only sector posting an increase in Q2 was ICI land, which was up 17 per cent year-over-year.

The apartment sector led the way in market share for Q2 with 27 transactions worth close to $130 million, which represents a 31 per cent share of market activity.

The sector also experienced a year- to-date decline of 35 per cent compared to the first half of 2018.

The Insignia Tower, a 125-unit high rise apartment acquired by Boardwalk REIT for $35,610,000, was the largest transaction that occurred in the second quarter.

The industrial sector had the third highest market share of Q2 representing 19 per cent of all transaction volume.

Q2 saw 32 industrial transactions worth a total of $81 million, representing a decline of 73 per cent from the same quarter last year, and a 47 per cent year-to-date decrease.

“While the market has experienced declining investment volumes since mid-2018, the apartment and industrial sectors continue to be the preferred asset classes, providing reasonable returns while servicing a continued demand from users” said Tatterton. 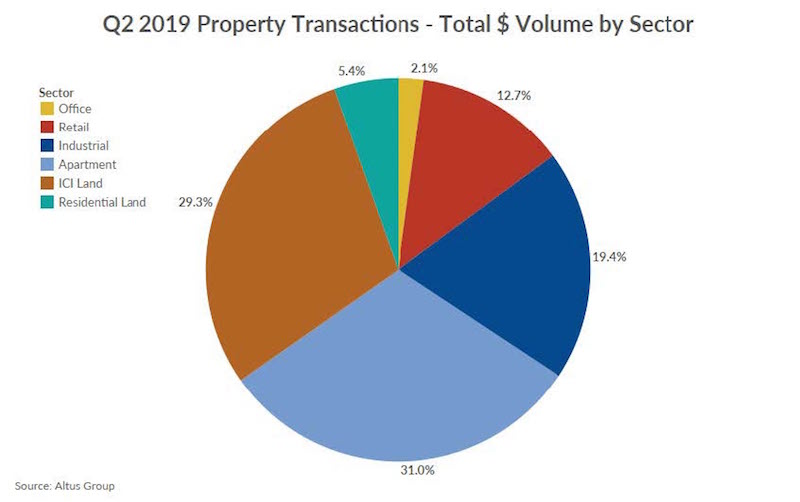