Environics Analytics’ Canada Is Home to More Seniors than Children report states that people born between 1946 and 1965 currently outnumber all other generations in in the country. 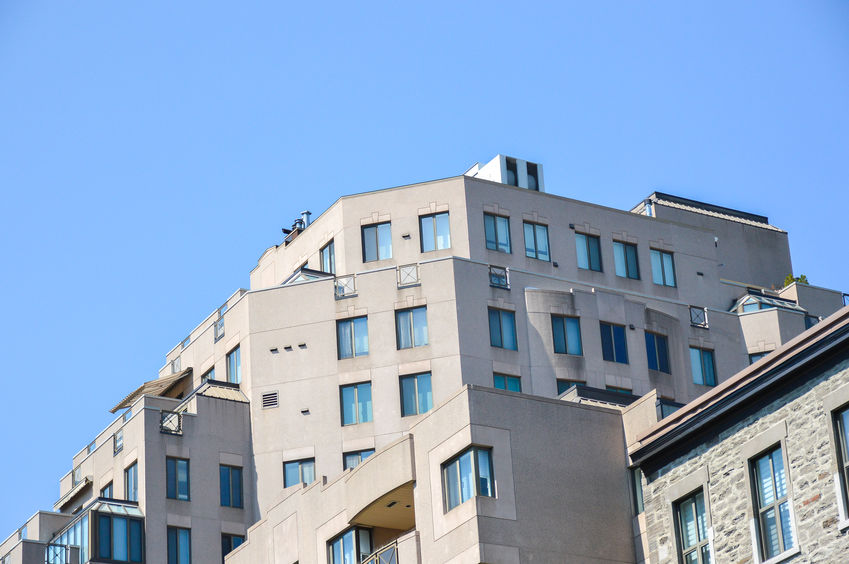 Point2Homes’ Reshaping the Housing Market: More Seniors Opt for the Big City Life says people over 55 own real estate further away from major business and financial centres. These areas tend to have less expensive properties and also boast more “elbow room” than homes in bigger cities.

As this generation grows older, owners exit the homeownership market opting for rentals or senior care facilities. Others will begin trading space for accessibility and comfort as they start to think about downsizing or buying second homes.

Point2Homes suggests that Millennials and Gen Z-ers are looking for smaller and affordable homes within proximity to downtown. With both seniors and younger generations looking for homes in the bigger cities, the pressure on the condo market increases.

Canada’s most active provinces seeing the biggest increases in senior populations are tied to the cities dominated by young people.

To discover how seniors are changing homeownership trends, Point2Homes explored the population changes between 2006 and 2016, and at the correlation between the percentage of seniors and home prices in Canada’s 150 biggest cities. 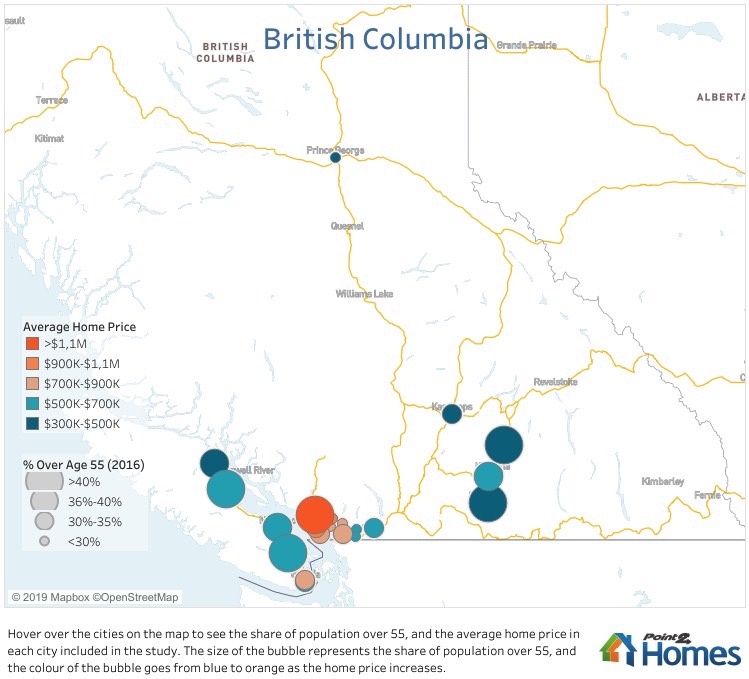 In BC, most people over age 55 are currently living in cities outside the Greater Vancouver Area. The “oldest” cities in the province, with a share of seniors over 40 per cent, are Penticton, West Vancouver, North Cowichan, Courtenay, and Vernon.

Port Moody, Surrey, Port Coquitlam, and Prince George have smaller share of seniors, around 25 per cent. Vancouver comes sixth in the province, with 28 per cent of its population over the age of 55.

Point2Homes states that the more people over 55, the cheaper the homes. According to their report, the five most expensive cities in the Greater Vancouver Area all boast some of the lowest shares of seniors in the province.

West Vancouver is an exception, where the share of people over 55 is the second highest in the province, but homes in that area sell for a considerably high price.

Point2Homes says BC’s youngest cities are the ones getting old the fastest. Port Coquitlam and Port Moody, two of the youngest cities in their analysis, have seen the biggest jumps in the number of seniors: 46 per cent and 39 per cent. 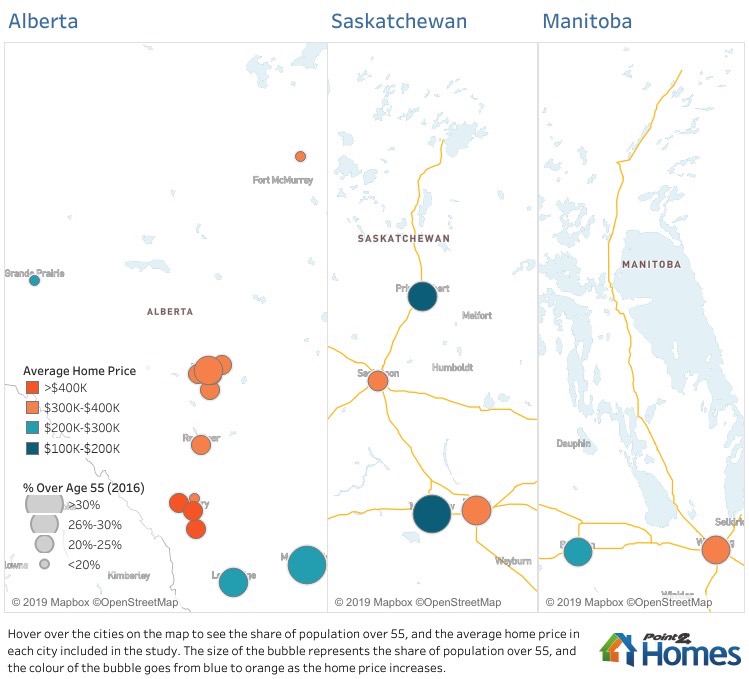 “Alberta, Saskatchewan, and Manitoba represent Canada’s youngest provinces. No city in this area has a share of seniors higher than 35 per cent. Moose Jaw, AB is the ‘oldest’ city, with 33 per cent seniors, and the youngest city, Wood Buffalo, AB has a share of people over age 55 of only 12 per cent,” said Point2Homes.

Alberta’s Wood Buffalo, Airdrie and Grande Prairie, have the second and third lowest shares of seniors, both under 20 per cent.

At a national level, the higher the share of people over 55, the lower the average home price — with the exception of Calgary, AB. Although seniors represent almost a quarter of the city’s population, home prices in Calgary are the highest in the region.

The younger cities that see the biggest spikes in senior population: Okotoks, AB with a 59 per cent increase, and Wood Buffalo, AB rising by 41 per cent. 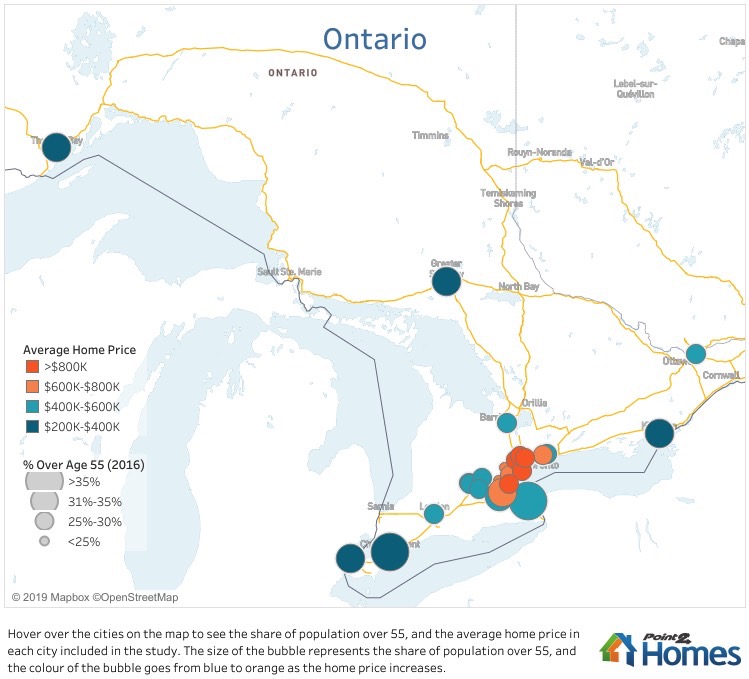 The cities in the Greater Toronto Area boast the lowest shares of people over 55. Milton is the “youngest” city in Ontario with 18 per cent seniors in 2016, followed by Brampton’s 22 per cent seniors, and 23 per cent in Ajax.

The three cities with the highest share of people over age 55, according to Point2Homes, are Kawartha Lakes (43 per cent), Brockville (42 per cent), and Owen Sound (40 per cent).

Toronto and Ottawa’s share of people over 55 is just under 30 per cent. In Ontario, the average home price drops as the share of seniors increases.

“It is the relatively ‘young’ cities that are aging the fastest, with the biggest increases in share of seniors seen by cities like Brantford (a 61 per cent jump compared to 2006), Aurora (whose senior population grew 52 per cent in a decade), and Clarence-Rockland and Pickering (both witnessing a 44 per cent increase in the past ten years),” said Point2Homes.

Not only is Milton the “youngest” big city in Ontario, but its share of seniors decreased since 2006 by -3 per cent. 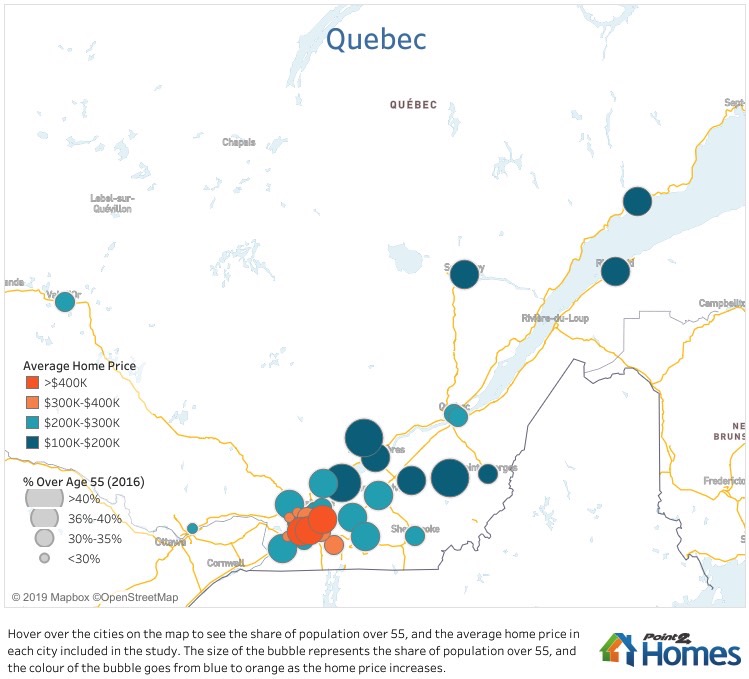 Shawinigan, Sorel-Tracy, and Thetford-Mines have the largest shares of seniors in the province, with 47 per cent and 46 per cent. The cities of Cote-Saint-Luc, Salaberry-de-Valleyfield, Rimouski, and Joliette’s senior population is also significant with 40 per cent of the community over 55.

The two “youngest” cities in the province boast low shares of seniors: Mirabel’s population over 55 reached 21 per cent in 2016, while Blainville reached 23 per cent. Two other cities with a small share of seniors are Terrebonne and Vaudreuil-Dorion (25 per cent).

Point2Homes reports that in Québec, the higher the share of seniors, the lower the average home price.

“The most outstanding exception is Cote-Saint-Luc, a smaller city in the Greater Montréal Area. The share of seniors here is rather high, 40 per cent, but this is the only city to see a decrease since 2006. Also, Cote-Saint-Luc stands at the top of the list, with the highest average home price in the province: $484,361,” said Point2Homes. 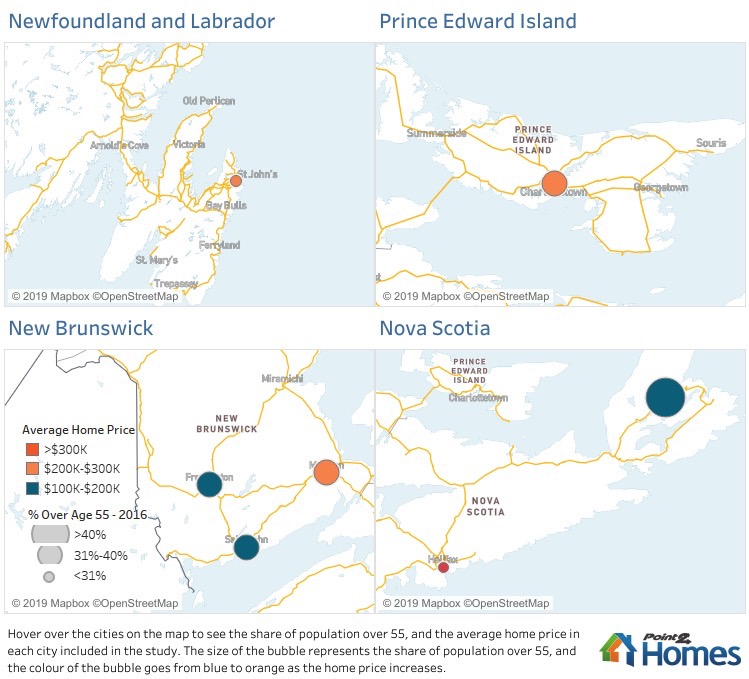 In the Atlantic Region, the lowest share of people over 55 is in Halifax, NS, tying with St. John’s, NL (30 per cent), while Cape Breton, NS boasts the highest share of seniors in the region (42 per cent).

Cape Breton, NS has both the highest share of people over 55 and the lowest average home prices, while Halifax, NS and St. John’s, NL are the “youngest” cities, but home prices here are the highest in the entire region.

“The increase in number of seniors in this region is also less dramatic, with the biggest spike in Cape Breton (28 per cent). However, given that the decade between 2006 and 2016, Cape Breton’s overall population decreased by eight per cent, the 28 per cent jump in people over age 55 shows that the rapid aging national trend did not bypass The Atlantic Region,” said Point2Homes.

Poloz appears in no rush to move interest rate, warns of trade threats

Perkins and Will Expands Its Canadian Practice