Altus Group and the Real Property Association of Canada (REALPAC) have released an in-depth look of commercial and residential property tax rates in eleven cities Canada.

The 2019 Canadian Property Tax Rate Benchmark Report found that eight of the 11 cities surveyed have a commercial rate, which is at least double that of the residential tax rate.

According to Altus Group, this means that a commercial property would incur property taxes more than twice the amount of an equally valued residential property, having dramatic impacts on Canadian small businesses.

Montréal, Toronto and Vancouver posted the highest commercial-to-residential ratios in the country, for a twelfth consecutive year. Calgary and Montréal saw the highest ratio increases in 2019, indicating a growing burden on commercial rate payers in those cities.

“Despite seeing some major shifts this year, the commercial-to-residential tax ratio is still an issue of relative fairness as we continue to see several cities across Canada shifting the burden of property taxes to business owners,” said Terry Bishop, President of Property Tax Canada at Altus Group. “Expecting businesses to shoulder the same burden while values decline, or taxes increase beyond business growth, is unsustainable. Measures that compress the gap between residential and commercial tax rates are positive steps that can help the viability of all businesses.”

Montréal’s commercial-to-residential tax ratio first rose above the average in 2008 and now sits at 3.93.

Toronto continues an eleven-year trend of lowering commercial rates with a decrease of 5.29 per cent while maintaining the second highest commercial-to-residential tax ratio.

Québec City’s commercial-to-residential tax ratio is the fourth highest of all cities surveyed. However, after a steady 15-year climb, it decreased by 3.75 per cent this year.

For the second consecutive year, Calgary saw the largest ratio increase of all 11 cities at 8.31 per cent and the largest increase in commercial tax rates by 13.36 per cent in 2019.

Edmonton rests below the average with a ratio of 2.41 and has remained relatively stable over the last four years. Winnipeg posted the highest 2019 residential rate at $12.33, an increase of 1.76 per cent from last year.

The rising valuations on commercial properties in Vancouver, Toronto and more recently Montréal, have begun to put more pressure on the sustainability of small commercial businesses.

In Calgary, the rapid decline in values of downtown core office buildings has caused a similar redistribution of taxes to small commercial properties which have not declined in value at the same rate.

Altus Group states that reducing the gap between residential and commercial tax rates is a measure that can help the viability of all businesses. 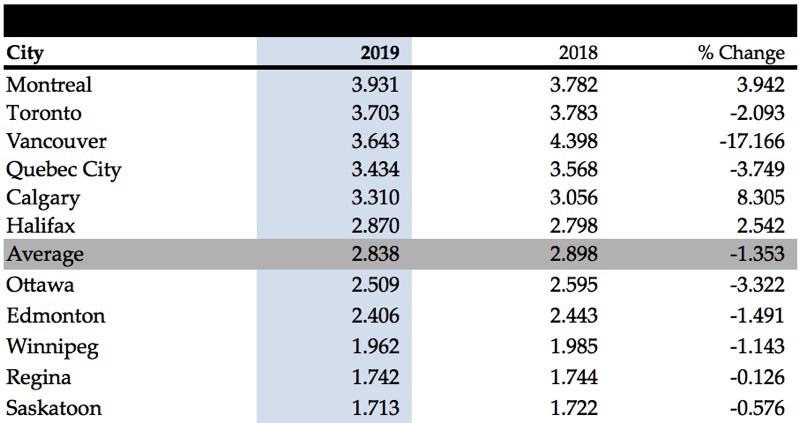