Cities Lead Fight against Climate Change and for Renewable Energy 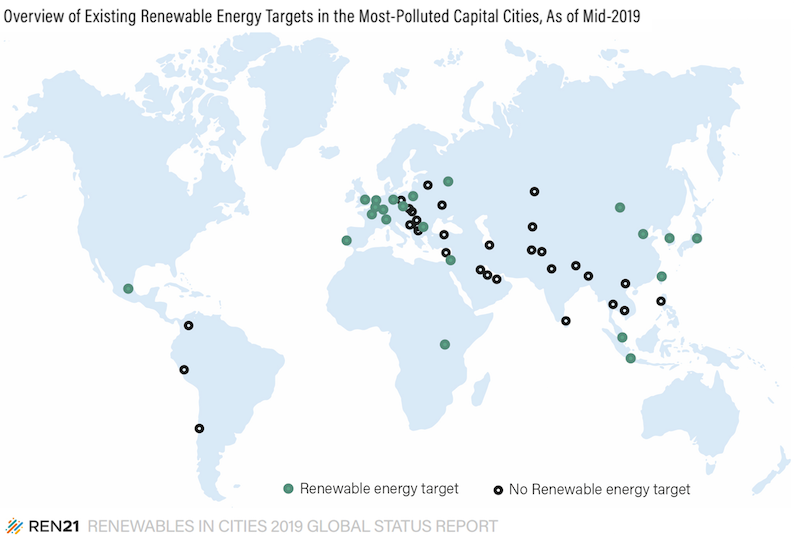 “It might come as a surprise to some, but it is a pattern that we now find everywhere in the world: Cities are driving the transition towards renewable energy. They understand that renewables mean less lung and heart diseases, more local jobs and relief for the municipal budget,” says Rana Adib, REN21’s Executive Secretary, at the presentation of their first Renewables in Cities 2019 Global Status Report (REC-GSR) in Paris. “If cities alone were to decide, today’s climate and energy politics would look totally different.”

“Fossil fuel centered economies make it difficult for national governments to put climate concerns front and center, with the result that globally we are not on track to meet the Paris Agreement,” says Adib “This truth is hard to face. The Emissions Gap Report 2019 that our partner UNEP releases shows the harsh reality: countries collectively fail to stop growth in global greenhouse gas emissions. The gap between targets and reality is only growing. Deeper and faster cuts are required now, and cities can take climate action into their own hands.”

According to REN21, many countries still expect that the implementation of 100 per cent renewable energy systems will take several decades.

Although there are plenty of cities in the world that already source 100 per cent of their electricity from renewables, now they are taking steps to expand their ambitions to get rid of fossil fuels in heating, cooling, transport and industry. 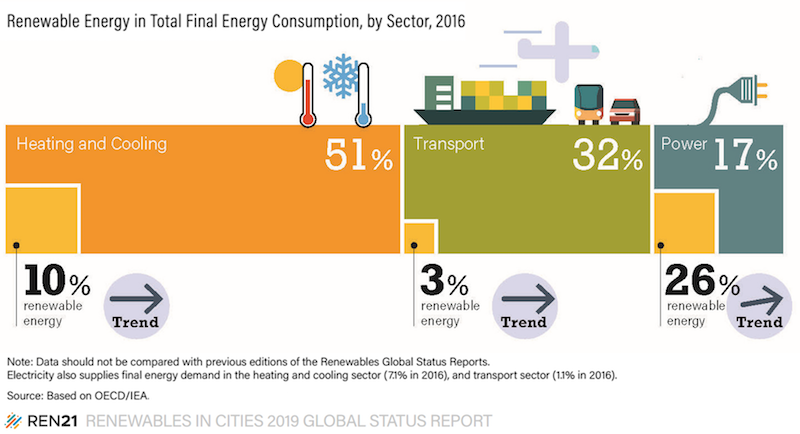 The report shows that more and more cities in Europe take the energy supply back into their own hands by re-municipalising energy companies or forming new ones.

REN21 reports that Barcelona was one of the first European cities in 2000 to require all new and renovated buildings to use solar energy to supply a minimum of 60 per cent of a building’s running hot water needs.

“An important message from the report is that many cities understand that they are directly suffering from the burning of fossil fuels. Shifting to efficient and renewable energy systems is the only way out,” says Adib.

One of the most powerful motivations is air pollution. Particles and other air pollutants from fossil fuels asphyxiate cities.

They barely measure a fraction of the diameter of a human hair, but according to studies by the World Health Organisation, their presence above urban skies is responsible for millions of premature deaths and costs billions. Health damages by road traffic alone cost the European Union around 62 billion euros a year. 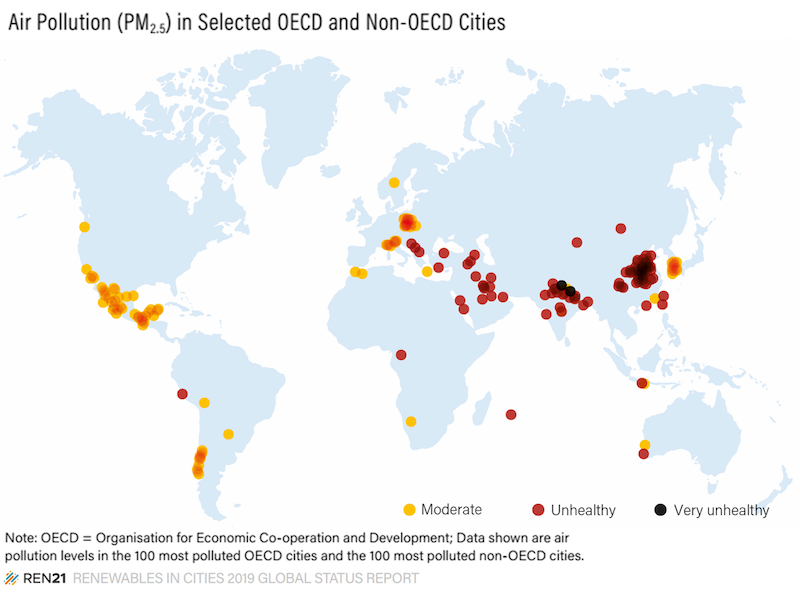 “Unsustainable and reckless consumption of energy has led to concerning levels of air pollution, making it the fourth-largest threat to human health and the single biggest environmental health risk that we face today. Against this background, transition to a cleaner and more sustainable energy model is no longer a choice but a must,” says Mr.Ban. “Cities can spearhead progress in combating air pollution, by implementing creative policies and incubating innovative ideas, like what the Seoul Metropolitan Government is doing. We have the necessary means to pursue energy transition. All we need is the political and institutional will to make the transition into reality.”

When signing the declaration in October, Copenhagen’s Mayor Frank Jensen said: “Air pollution is a global problem, but it has a local solution. Copenhagen wants to be the world’s first climate-neutral capital by 2025. This year, we have put 400 electric buses on the streets and by next year ferries should go electric, too. We want that our citizens can take a deep breath at any time of the year without fearing for their health.”

“We can say that many benefits from renewables are the same all over the world,” explains Adib. “But there are also differences. For cities in the developing world, renewable energy is the only way to expand energy access to all inhabitants, particularly those living in urban slums and informal settlements and in suburban and peri-urban areas.”

Cape Town has the highest electrification rate in South Africa but thousands of households are in areas that are un-electrifiable because the land is illegally occupied or situated in a flood prone or restricted area.

Poverty often causes households to not use electricity for part of the month. “While efforts to deliver housing are ongoing there is significant informality. Open flame technologies like candles and paraffin stoves are used. Devastating shack fires occur periodically causing deaths, injuries and displacement. Solar home systems are a safe and affordable alternative”, says Dan Plato, Mayor of Cape Town.

Executive Director of the United Nations Environment Programme, Inger Andersen, states that “by avoiding resource depletion and pollution, and creating jobs, renewable energy is a common-sense engine of social and economic development. As our cities expand, those built on a strong renewable energy base will thrive.” 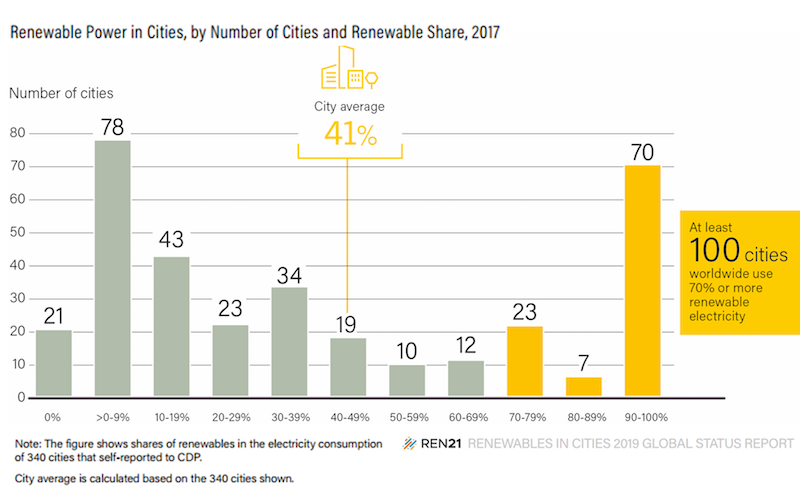 Data in the report reveals that increased prosperity and living standards in cities cause a sheer insatiable hunger for energy. REN21’s report shows that 70 per cent of all cities are already affected by the impact of climate change today.

“If cities don’t do something about the way they produce and use energy, they are going to wreak their own destruction. It’s that simple and they know it. And with more than one billion people worldwide living in urban slums and informal settlements, the poorest will be the hardest hit. Even in Europe, tropical storms will become more frequent. We got a taste of it when storm Leslie hit northern and central Portugal with wind speeds of over 100 km/h and brought heavy rainfall in Spain and France last year,” says Adib

Keeping the energy infrastructure working, once the flood or storm arrives, is essential to secure continued operation of rescue services, hospitals and information systems.

Businesses and industry invest in renewable energy to avoid disruptions. Cities adopt energy systems based on distributed renewable generation because they are more flexible and resilient to those central shocks which are becoming more frequent with climate change, underlines the report.

“An advantage of renewable energy is that it gives citizens a role in shaping the infrastructure,” says Adib. “Our report shows that in recent years, the number of community energy projects using renewable sources has surged, confirming that democracy is just as important as a driver for the energy transition as climate change.” 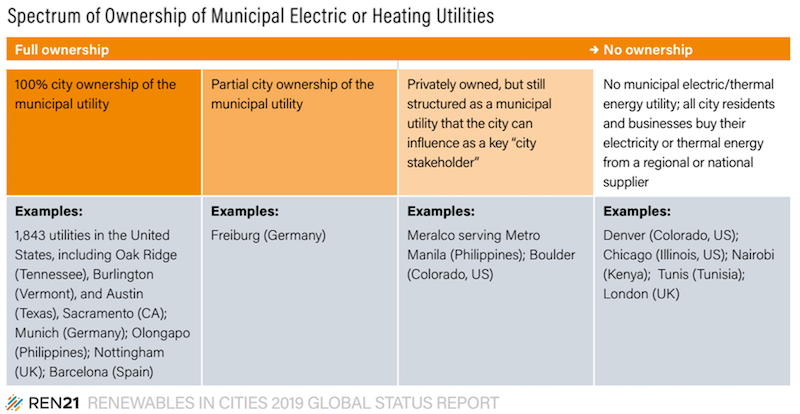 Denmark, Germany and the UK are at the forefront of this development while projects begin to emerge in other parts of the world including Thailand, Japan, and Canada, the report notes.

“Cities can actively drive the fight against climate change at national and global level. They are able to tap into opportunities that other levels of government do not have, including a more direct relationship with local citizens and businesses,” says Germany’s Minister for Environment, Nature Conservation and Nuclear Safety, Svenja Schulze. “Citizen engagement and public pressure have raised cities’ level of ambition on renewables in many places around the world, reaping economic, social and environmental benefits.”

“Yet, it is important to emphasise that even the world’s largest cities with the most decision-making structure cannot replace national governments and their responsibility in fulfilling their commitments under the Paris Agreement. As the climate crisis unfolds, no one can hide,” says Adib.