A recent commercial real estate investment survey by Altus Group revealed Q1 2019 registered a total of 322 sales transactions in the Vancouver Market, totalling a value of $1.58 billion, a decrease of 49 per cent compared to Q1 2018.

Since Q3 of 2014, the transaction volume in the first quarter of the year is the lowest in 18 quarters, and the total number of transactions has declined by 36 per cent from Q1 2018.

Office, retail and industrial markets settled at 4.0 per cent, while the apartment market is expected to slightly slow down to an overall average of 3.5 per cent. 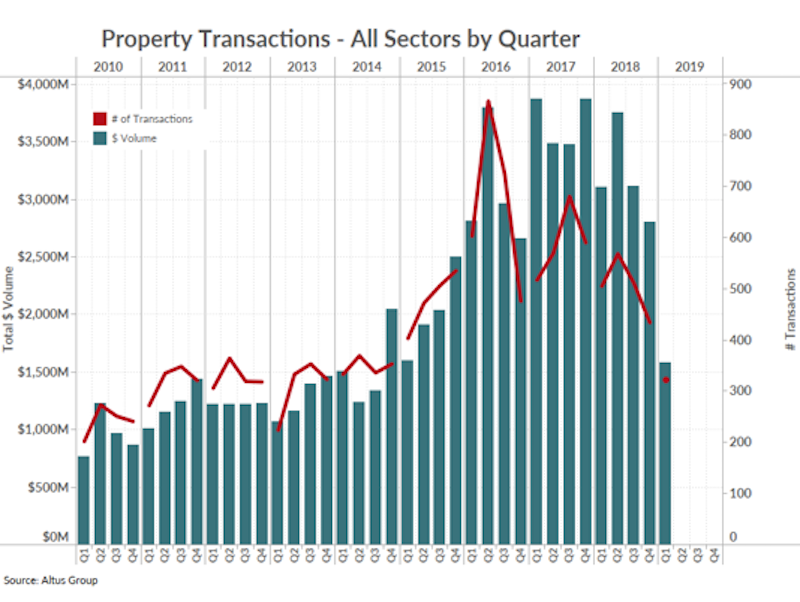 The first quarter saw the industrial sector decline to $228 million, a 54 per cent decrease from an all-time investment high in Q4 2018.

Overall, 49 transactions took place, decreasing from 70 in the previous quarter, and a 7.5 per cent decrease from the same quarter last year.

A lack of available industrial product remains a significant contributor to the insufficient transactions within the sector.

With vacancy rates at all time lows, values remained strong as the average price per square foot increased by five per cent over the quarter, to $399, according to Altus Group.

The Investment Trends Survey reported strata property sales made up 49 per cent of the transactions in the industrial sector, and 20 per cent of investment, representing $47.8 million in total.

According to Altus Group, the retail sector experienced its second consecutive decrease in overall investment in Q1 2019, with 35 transactions worth $136 million in Q1; this investment is down by 47 per cent in dollar volume from the previous quarter, and down 78 per cent from Q1 2018.

Respondents to the Altus Group Investment Trends Survey unveiled that retail cap rates had experienced slight decompression in 2019 and are now projected to remain steady, despite a two-quarter slide.

Altus Group reports that Vancouver’s only net positive sector was the office market with 26 deals in the first quarter, up from 16 transactions in the previous quarter, and 13 in Q1 2018.

This was Vancouver’s strongest quarter for office market since Q1 2017 by dollar volume, driven by key transactions and new, centrally located, high-end strata projects such as 34IW7.

The report suggests that the increase in transaction volume is expected to continue as more strata office projects within this transition area are completed. 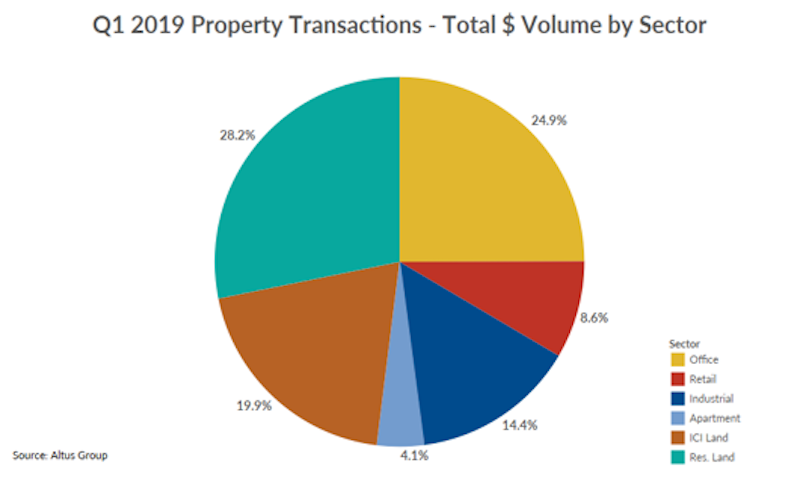 Residential land declined under the $1 billion mark for the first time in 13 quarters to $446 million, representing the sector’s lowest dollar volume output since Q2 2014.

This decreased by 68 per cent in dollar volume from the previous quarter and 66 per cent year-over-year, while transaction volume witnessed a drop of 35 per cent from Q4 2018 and 53 per cent from the same quarter last year.

Although this is typically Greater Vancouver’s strongest performing sector, the marked decrease in sales volume and transactions had the most significant impact on the quarter’s overall performance, according to the survey.

“The lowest transaction volume since Q1 2013 is reflective of the gap between vendor and purchaser price expectations, the lack of product and has resulted in decreased market activity,” said Paul Richter, Director, Data Solutions at Altus Group.