Condos are negatively impacted by rent declines caused by the pandemic: report

From 2019 to the first four months of this year, condominium apartment rental rates declined at many projects in the GTA, according to TorontoRentals.com and Bullpen Research & Consulting’s deep dive into the Toronto GTA May Rent Report. 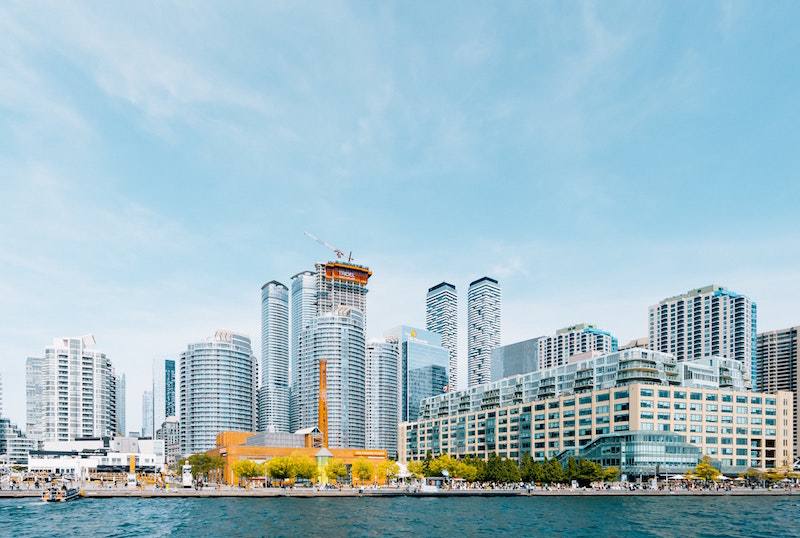 However, units purchased 7-10 years ago are delivering $400 to $600 in positive cash flow. Investors holding units long-term are seeing positive returns.

The Toronto GTA Rent Report shows analysis of whether any further erosion of rental rates due to job loss and slower population growth will impact pre-construction investors and future supply of this “shadow rental market.”

“This pandemic could have a real impact on the supply of new housing in the GTA in the long term, as missed payments by tenants and lower rents could have many investors rethinking future pre-construction condo purchases, said Ben Myers, president of Bullpen Research & Consulting. “These buyers help developers reach pre-construction sales targets, and a decline in investors will result in significantly less new housing supply in four to five years if these purchasers change their condo-buying habits. There are not enough purpose-built rental apartment developers to pick up the slack.” 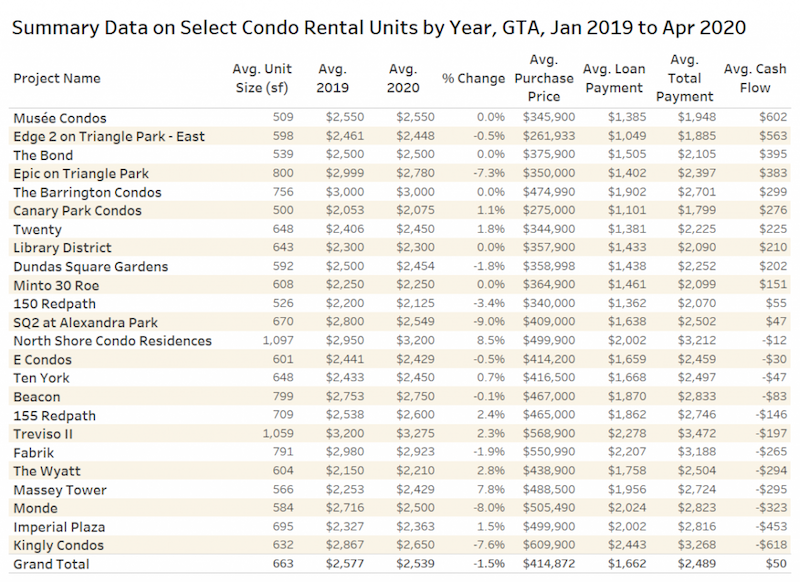 “Developments completed after November 2018 are not subject to rent control in Ontario, and investors in those buildings are more likely to decrease their asking rents short-term, knowing they can raise them to the market rate when the economy and real estate recovers,” said Matt Danison, CEO of TorontoRentals.com. “So this factor, plus the incentives offered shows the market may be softer than our data shows.

The TorontoRentals.com report also covered the GTA at a more macro level, which revealed the average monthly asking rent in the GTA peaked at $2,328 in August 2019, but was still up 1.3 per cent annually in April 2020.

Richmond Hill has the highest rent because of more large single-family homes offered for rent that push the average up, and fewer small, older, and worn-down rental apartments that pull the average down.  Among the top areas, Scarborough had the lowest average rent at $2,023 per month. 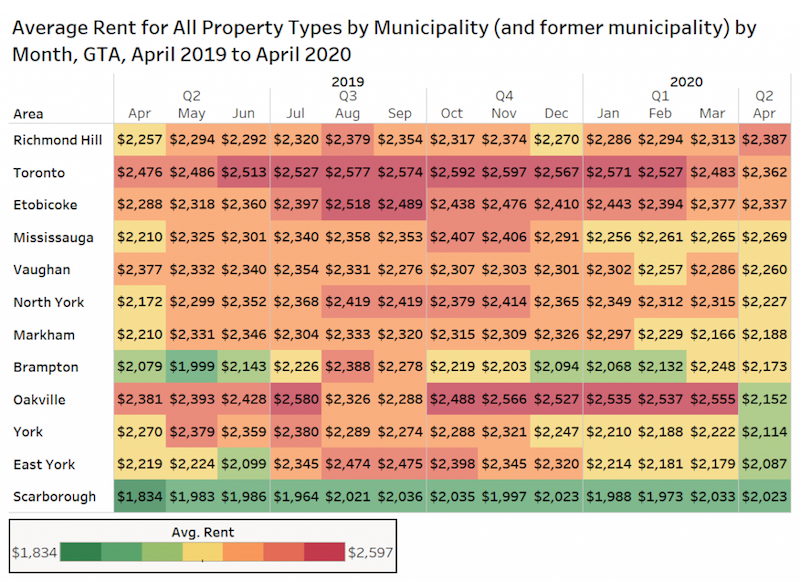 Toronto rents declined 5 per cent both monthly and annually in April. Part of the decline can be attributed to an increase in former short-term rentals hitting the market, which added a major infusion of supply in a market weakened by the pandemic and the economic and health uncertainties around moving. 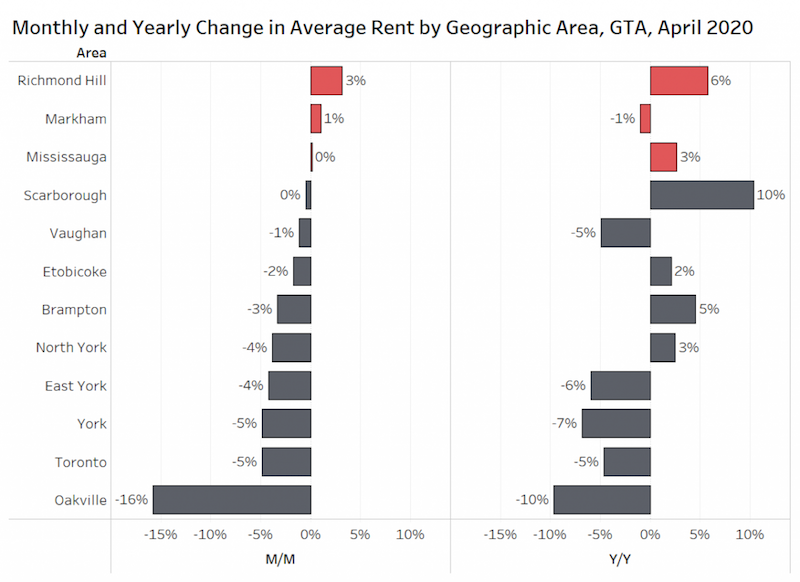 Rental demand has plummeted in Toronto as tenants stay in their current accommodations for fear of exposing themselves to COVID-19. And, unemployment has soared with the pandemic lockdown, reducing move-up, move-down movement, as well as creating new households from recent graduates, students and immigrants.

Many landlords have tried to entice tenants to make a move in this uncertain time by lowering their asking rent.

Some major developments experienced noteworthy declines including: Three Hundred on Front Street and Massey Tower on Yonge Street at -13 per cent monthly, as well as Smart House Condos on Queen Street at -11 per cent  and 87 Peter at -7 per cent.

Due to the changing composition of units for lease, several projects experienced increases month over month (this could occur with more units for lease on upper floors, units with large balconies, upgraded interior finishes, parking and corner units). 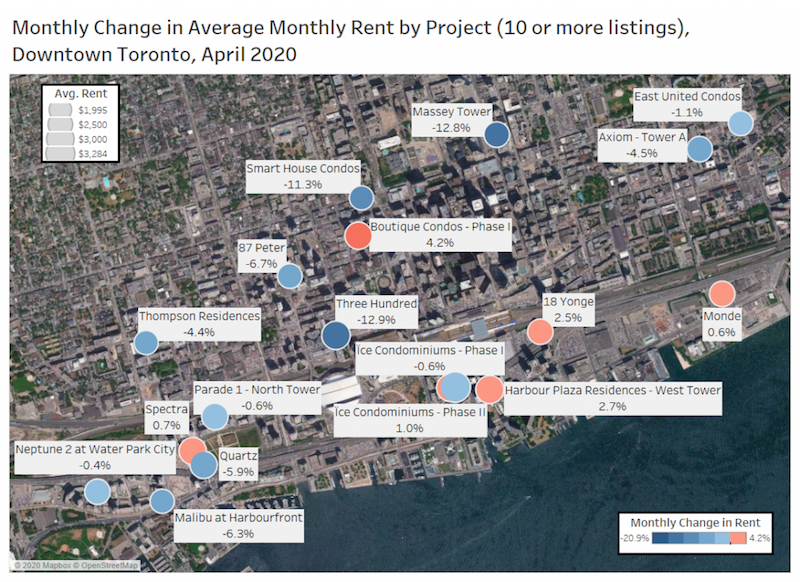 The largest declines in average monthly asking rents for rental apartments in the former city of Toronto were three-bedroom suites, which declined by 16 per cent month over month.

Two-bedroom apartments experienced a monthly decline of 14 per cent. One-bedroom suites declined by 7 per cent monthly and studios dropped by 3 per cent from March.

Investors have to think long term, but they must also consider the time between the pre-construction purchase and closing, as the farther out the completion date, the better chance that rental rates will have appreciated.

As malls re-open across the country, worries grow that consumers won’t come back