The Canadian Real Estate Association said Thursday its lower home sales forecast will cost the economy $1 billion next year — as the impact of tighter mortgage regulations that come into effect New Year’s Day take a toll on the sector.

CREA said in an updated projection Thursday the banking regulator’s revised mortgage underwriting guidelines, which include a stress test for uninsured mortgages, will reduce sales activity across the country, particularly in and around Toronto and Vancouver.

The association now forecasts a 5.3 per cent drop in national sales to 486,600 units next year. That new estimate shaves about 8,500 sales from its previous 2018 forecast. 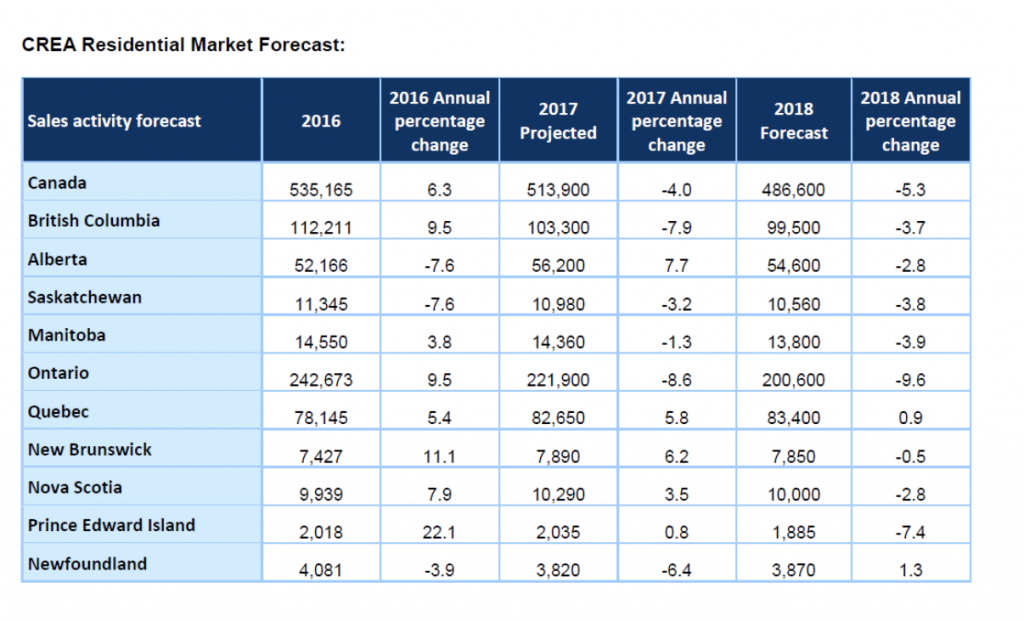 Citing research by Altus Group, CREA said this forecast decline of more than 27,00 sales from 2017 to 2018 translates into a decrease of $1.1 billion in economic activity and nearly 12,000 fewer jobs, although it did not provide more detail on how or which jobs will be affected.

“With some homebuyers likely advancing their purchase decision before the new rules come into effect next year, the ‘pull-forward’ of these sales may come at the expense of sales in the first half of 2018,” CREA said in a statement.

“Meanwhile, other potential homebuyers are anticipated to stay on the sidelines as they save up a larger down payment before purchasing and contributing to a modest improvement in sales activity in the second half of 2018.”

CREA’s outlook is more pessimistic than the forecast outlined by Royal LePage in a report on Wednesday. In its market survey forecast, the real estate firm suggests its house price composite will increase 4.9 per cent next year to $661,919 even as stricter mortgage rules slow the housing market.

In November, the number of homes sold through CREA’s Multiple Listing Service rose by 3.9 per cent compared with October, led by a 16 per cent sales spike in the Greater Toronto Area. Sales were up 2.6 per cent from last November, marking the first year-over-year increase since March. That helped send the national home price up 2.9 per cent, year-over-year, to $504,000.

The number of newly listed homes rose 3.5 per cent in November, which reflected a large increase in new supply across the GTA.

In October, the Office of the Superintendent of Financial Institutions announced the final version of its revised guidelines, called B-20. The new rules, which come into effect on Jan. 1, require would-be homebuyers to prove they can still service their uninsured mortgage at a qualifying rate of the greater of the contractual mortgage rate plus two percentage points or the five-year benchmark rate published by the Bank of Canada.

CREA argues the new guidelines make it tougher for potential buyers with more than a 20 per cent down payment to qualify for a mortgage. These low-ratio mortgages comprise the vast majority of Canadian mortgage originations, it added.

The association also narrowed its forecast for national sales activity this year. It expects sales to decline four per cent to 513,900 units in 2017 due to weak activity in Ontario, after the province in April announced measures such as a foreign buyers tax to cool the market.

While November sales activity in the Greater Toronto Area was down significantly compared to a year earlier, other large markets posted annual gains, including Greater Vancouver and the Fraser Valley, Calgary, Edmonton, Ottawa and Montreal.

BMO economist Robert Kavcic noted that the adjustment in the Toronto market is ongoing.

“But strong underlying supply-demand fundamentals should prove supportive next year once the remaining froth gets worked off,” he wrote in a note to clients.

“In all likelihood, Bank of Canada rate hikes and the coming rule changes from OSFI should keep the froth from returning. Elsewhere, look for continued strength in Ottawa and Montreal, stability in Alberta, and an ongoing supply-demand struggle in Vancouver.”