On October 3rd, ULI Toronto and mixed-use developer TAS brought community members and industry leaders together for an evening that combined a documentary screening of Accidental Parkland, and an expert-led panel about placemaking opportunities in Downsview Park.

The event took place on the future site of The Keeley, a new mid-rise development by TAS located at 3100 Keele Street, directly across the street from Downsview Park. Plans for The Keeley include a new public park that will visibly connect two very significant urban greenspaces, Downsview Park on the east and Black Creek Ravine on the West. 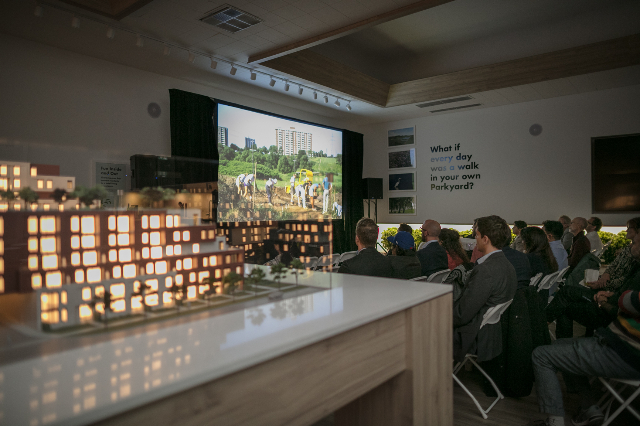 Almost 300 acres in size, over the last several years Downsview Park has undergone major landscape improvements including: a pond that has attracted all sorts of wildlife, a local food movement including an apple orchard and several urban farms, a 3km circuit path, a tall grass project and an urban forest. The new Downsview Park subway and GO station, revitalization of the Hangar buildings, upcoming opening of Centennial College and the sale of adjacent sale of the Bombardier Lands is also turning new attention to Downsview Park.

“Downsview Park sits in the middle of two very important water courses, said Charma. “On the east is the Don River on the West is Humber Valley and Black Creek. So the role this whole area plays is as a vital east-west connection.”

Known for developing projects in up-and-coming neighborhoods, Mortazavi stressed the opportunity he saw for The Keeley with Downsview Park across the street, and more importantly, the ravine system as a vital piece of community infrastructure. When you get into the ravine “you are in a very lush environment” said Mortazavi. But the ravine also “acts as a fundamental connector. You can get on a bike from behind this property and bike all the way York University. The bike network there connects to 12km of bike trails that are being built.” You are then connected to Downsview, the largest urban park in Canada, Mortazavi went on to explain.

Glaisek, who manages park designs for Waterfront Toronto, identified some parallels between Toronto’s Waterfront and Downsview Park. Like the waterfront, not many people in the city are familiar with things to see inside the park. Both are also very large-scale, multi-generational projects. From a marketing point of view, Glaisek explained, “getting people to understand the gems that are there before they have all been enmeshed in the bigger vision would really help keep Downsview in people’s consciousness.” He also stressed the other component of great parks is the programming diversity within them, and how neighbourhood and stakeholder consultations are critical to developing a program and design.

Farrow unexpectedly shook things up by throwing some questions out to key stakeholders and city building influencers who were in the audience including, Al Rezoski, Manager of Community Planning for North York, James Cox, Sr. Director of Real Estate from Canada Lands and Julian Sleath CEO of the Bentway. One of the points discussed was the value of parks as huge benefit to society to improve mental health. Sleath expressed how other cities are channeling health care money to large projects, like parklands and rejuvenation of public space, and seeing health care programs diminish. 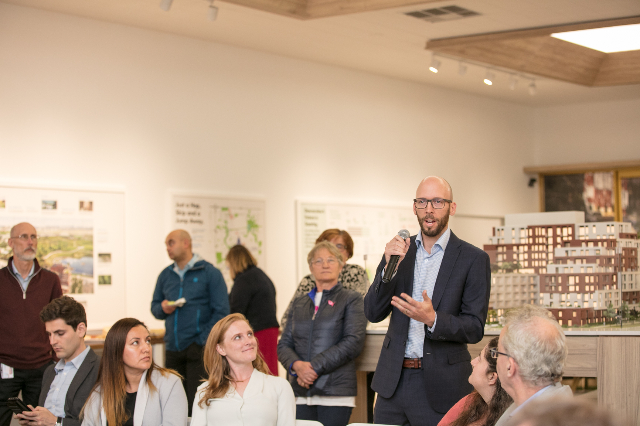 Some community members who attended the event also joined the conversation, expressing the importance of community consultations and the need for clearly marked access points.

Mortazavi noted discussions he started to have with the City about adding in a cross walk on Keele Street, and how, on the heels of all the hard community engagement work already done, Downsview Park is now at that magical moment where things are starting to change. “The biggest piece of all this is that we need to have a different kind of conversation focused on collaborative partnerships, Mortazavi said. “We all want the same outcomes – we just need to be talking with each other more.” 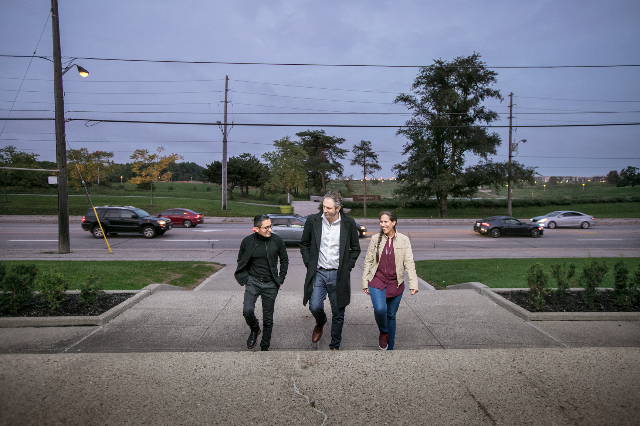