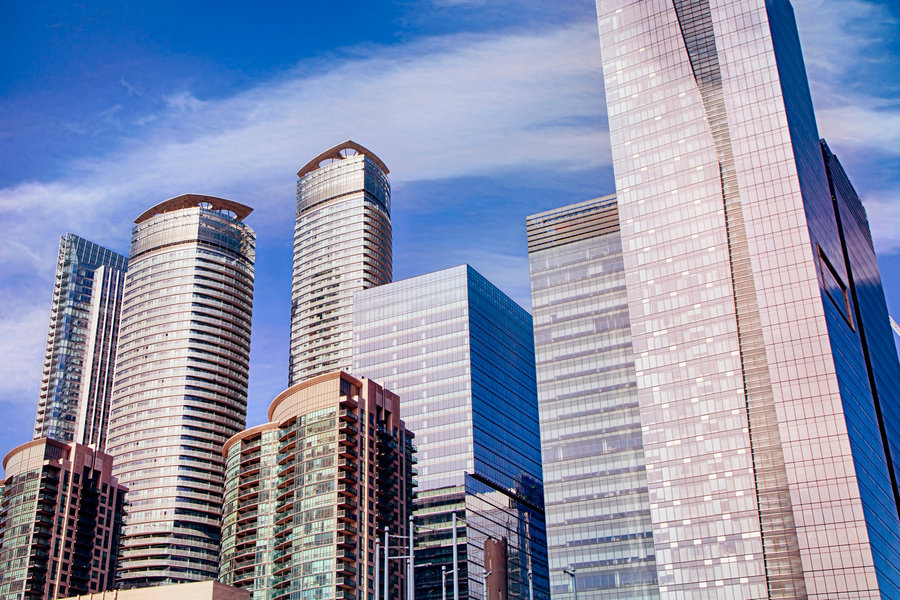 TORONTO – When Mark Garner looks around downtown Toronto all he sees is growth.

At Yonge and Gerrard streets, the executive director of the Downtown Yonge Business Improvement Area watches the lobby of the 80-storey Aura condos – the country’s tallest – filling up with deliveries. On the east side of Yonge Street by Ryerson University, he sees a residential building in the works that just bumped up its size from 80 to 90 storeys.

Steps away, there are proposals to turn the Elephant and Castle restaurant into an 80-storey tower and replace the former Chelsea Hotel with four residential towers.

Keeping up with the boom is Garner’s obsession because the new buildings will affect everything from traffic to business performance, transit needs and demand for mental health services in the bustling neighbourhood, whose population crept above 276,000 last year.

That figure was revealed by Statistics Canada on Wednesday, when it released the first of seven tranches of data from the census last year. For the first time, it contained information on the country’s downtowns.

The data showed more than 1.2 million people, or 3.5 per cent of Canadians, lived in the downtown portion of one of the country’s 41 large urban centres in the spring of 2021.

These downtowns saw their populations grow by 10.9 per cent between 2016 and 2021, a much faster rate than the 4.6 per cent growth they experienced during the previous census period, which covered 2011 to 2016.

Among Canada’s downtowns, the population is growing the fastest in those of Halifax, Montréal and Kelowna 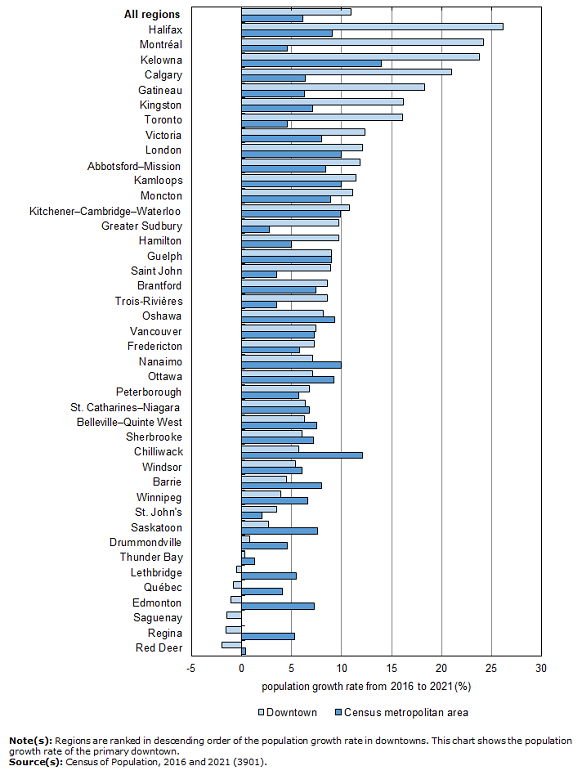 Those numbers include a slowdown in growth experienced during the COVID-19 pandemic, which was more than a year old during last May’s census.

The health crisis has challenged cities. Many downtown regions became ghost towns in the earliest days of the pandemic as businesses temporarily closed and companies sent staff home to work. Immigration halted and some residents sought housing outside of the city, where space was more plentiful and real estate prices lower.

The pandemic’s effects were even more noticeable in Montreal and Vancouver.

Slowly but surely, people have since returned to downtowns. Even so, retail and restaurant sales, foot traffic and the general atmosphere still remain a shell of what they once were.

That means predicting what the downtowns of the future will look like is more tricky.

“Where are all these people coming from and where are they going?” said Garner. “It’s a big challenge.”

Despite the pandemic, Environics Analytics chief demographer Doug Norris believes most downtowns are on the path to keep booming.

In Toronto, Montréal and Vancouver, downtowns and distant suburbs growing at the fastest pace, while the population in intermediate suburbs of Calgary, Edmonton and Ottawa is growing fast

Downtown Vancouver’s growth will be a bit less pronounced because it’s already built up, but he expects “hefty growth” in Toronto and Calgary and a sizable amount in “second-tier” downtowns Ottawa and Winnipeg.

“In the big cities like Montreal and Vancouver, even if there is some shift in working, it is going to be very vibrant,” Norris said.

“There are all kinds of reasons to go downtown.” 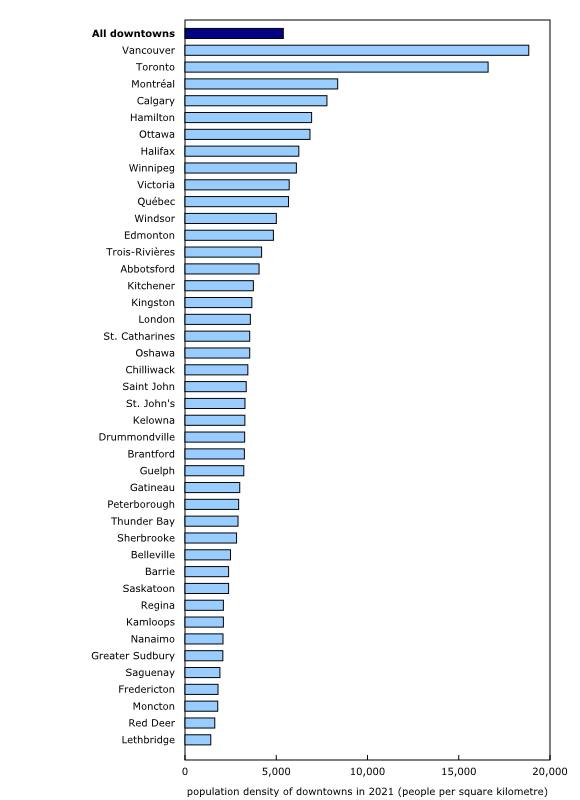 But Garner has doubts that downtowns can handle more growth with their current levels of infrastructure.

Before the pandemic, he said, 42 million people walked on the BIA’s stretch of Yonge Street every year and 55 million visited the Eaton Centre mall.

About 175,000 Torontonians live within a 10-minute walk of Yonge-Dundas Square and between shoppers, workers, students and theatregoers, the neighbourhood’s daytime population would swell to well over 600,000.

Population density increases sharply the closer you are to downtown

The strains were showing as condo after condo cropped up.

“You’re building towers where there’s currently no parking,” he said, citing a project under construction at Yonge and Gerrard Streets.

“You’ve got a condo, which now has to have delivery trucks, cars, so all of a sudden you put 350 parking spaces and cars in an area that were never there.”

“There’s very limited land and it’s not like the suburbs, where there’s infinite amounts of land to be able to develop on,” she said.

“If you want to be within downtown, you have no choice but to choose one of the downtown condo options that you have.”

While Mazaheri noticed people fled Vancouver’s downtown for larger properties during the pandemic, the allure of the area hasn’t dissipated and she predicts it will see a resurgence as workers return to offices.

But the properties up for grabs will come with a steep cost and lots of competition that’s already materialized.

The Real Estate Board of Greater Vancouver reported the benchmark price for homes sold in Metro Vancouver last year was more than $1.2 million, up 17.3 per cent from December 2020.

“I have certainly noticed as of January of this year, more activity was in downtown,” Mazaheri said.

“Yesterday, I just sold a condo that was around the $750,000 price range with multiple offers and it sold in five days … so we will definitely be seeing a huge shift in demand for properties in downtown Vancouver. It’s only a matter of time.”

Canada’s fastest growing and decreasing municipalities from 2016 to 2021