Over the next 30 years, Ontario’s population will become older and grow somewhat slower than in the past, according to the Financial Accountability Office of Ontario’s (FAO) Long-term Budget Outlook.

The report states that slower economic growth over the outlook will contribute to a slower pace of revenue gains for the Province while a growing but older population will put upward pressure on public spending. 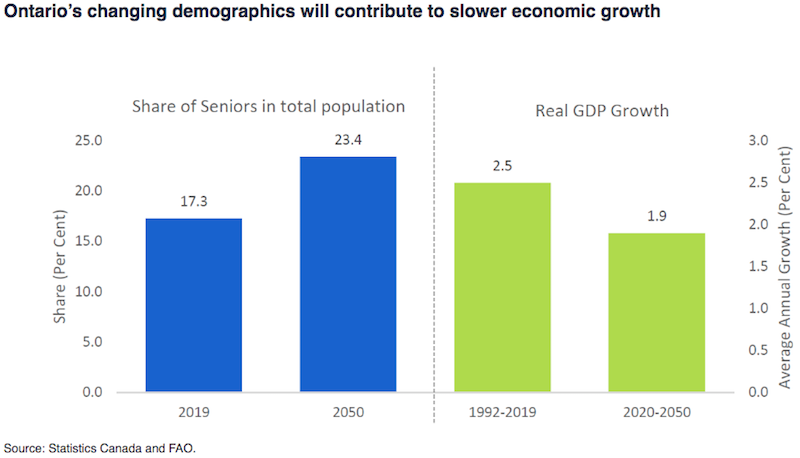 In the medium term, the Ontario government’s commitment to balancing the budget by 2023-24 relies on limiting spending growth through efficiency gains and transforming the way public services are delivered.

The success of the government’s current reforms to its core programs – health, education and social services – will have a significant impact on Ontario’s long-term fiscal position.

“If the government successfully transforms public services and achieves significant and permanent cost savings, Ontario’s fiscal position would steadily improve, with the debt burden lower in 2050 than it is today,” said Peter Weltman, Ontario’s Financial Accountability Officer. “However, if the government relies on temporary cost reductions to balance the budget, the province’s future finances will be challenging, likely prompting the need for significant future policy changes.” 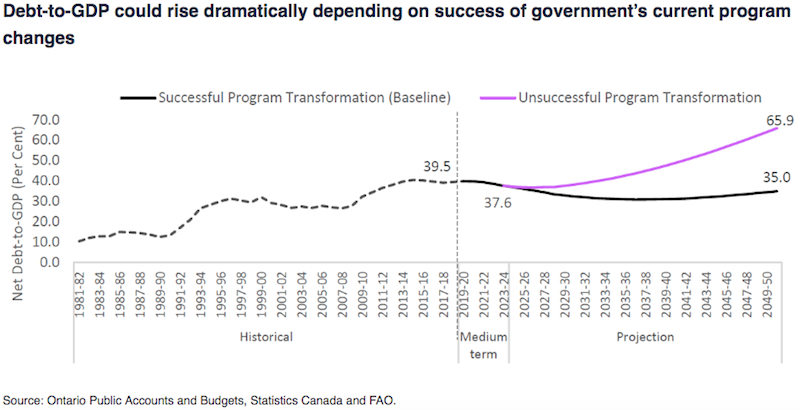 An aging population will contribute to slower growth in the labour force and overall economy.  Ontario’s real GDP growth is projected to average 1.9 per cent annually over the outlook, down from 2.5 per cent over history.

“If the government relies on temporary spending restraint to balance the budget, Ontario’s net debt-to-GDP ratio would rise sharply over the long-term reaching almost 66 per cent by 2050, likely prompting the need for significant future policy changes,” says the FAO.

Bank of Canada cuts rate target to 0.75 per cent in response to COVID 19