And in this corner…

As interest in tall timber buildings gains momentum, a dust-up between the two age-old building materials of wood and concrete is also brewing.

Economic discourse is rife with the nouns disruption and transformation. One of the more intriguing tussles is between two of our oldest building materials, wood and that old Roman staple, concrete. The specific circumstance is the recent bevy of eye-catching proposals and demonstration buildings pushing mass wood structures well over current six-storey code limits. These new taller wood buildings and pending regulatory changes now pushes mass wood or “tall timber” into the core market for concrete and steel.

Like other disruptive incursions, the challenger has received breathless press touting its “progressive” credentials, from sustainability to lower costs; improved worker safety; faster and less construction disruption; and better aesthetics. Architects have been quick to propose architecturally striking designs and some provincial jurisdictions have been equally quick to endorse projects even before the latest National Building Code of Canada (NBCC) has been finalized. Pushback has been minimal…until recently.

On March 18 of this year, Michael McSweeney, president and CEO of the Cement Association of Canada (CAC) issued a press release critical of the B.C. government’s push for tall timber up to 12 storeys before the NBCC 2020 revisions are complete. In addition to citing a lack of “significant evidence” on claims of seismic safety, he questioned tall wood’s professed environmental superiority and its stimulation of wood jobs in distressed resource communities. On the latter, he stated this would only “rob Peter to pay Paul.” Perhaps somewhat beside the point, he also argued the 18-storey Brock Commons at UBC was really a “composite building” with a concrete plinth, elevator/stair shafts and floor coverings. (Fire risk was absent although this was raised earlier by the Canadian Precast/Prestressed Concrete Institute in March, 2015 when Québec issued guidelines for 12-storey mass timber buildings.)

A month later, the CAC issued a second release on construction de-carbonization, calling out governments for “placing big bets on one particular strategy: building with more wood.” It also summarized the Winnipeg-based  International Institute for Sustainable Development (IISD) think tank’s study, titled Emission Omissions: Carbon accounting gaps in the built environment. Funded by the CAC, the report critically re-examines existing life cycle assessment/analysis (LCA) models and concludes that wood provides, McSweeney argues, “no guaranteed outperformance on carbon compared to other materials.” Indeed, under one of six IISD scenarios, concrete comes out ahead.

To better understand the debate, we conducted two in-depth interviews: the first with Richard McGrath, Director, Codes and Standards, and Adam Auer, VP, Environment and Sustainability at CAC; the second with Peter Moonen, Municipal Affairs and National Sustainability Manager with the Canadian Wood Council. On some issues there is agreement or at least quite clearly different perceptions of what is going on.

Interestingly, both sectors accept off-site prefabrication and particularly modularization as the future. Not only will this significantly decrease urban disruption and respond to increasingly tight construction sites, says Moonen, it will allow for super-low tolerances. Digital software permits detailing down to each bolt allowing for fully or partially manufactured and assembled components in a controlled factory environment. Buildings will be “assembled” on site over weeks not built over years and will require fewer construction workers at a time when trades shortages are becoming critical.

While tall wood has a leg up in this area, McGrath points out that prefabrication is decades old in concrete. It also has the advantage of being able to encase all services fully protected from fire and the elements. The future may be New York’s 27-storey Marriott Hotel to be assembled over 90 days from stacked concrete modules, albeit shipped in from Poland. While McGath references Habitat 67 as a precedent, tall concrete modular construction may be even rarer than similar wood projects.

The two sectors clearly disagree, however, on what motivates a sectoral debate. McGrath believes, given wood’s current limited share of tall buildings, that displacement of concrete is not a motivating concern. Moonen believes otherwise, arguing “concerns” over fire risks and higher insurance costs, for example, arise from the sector’s fear of market share loss. Indeed, McSweeney’s “Peter/Paul” comment only makes sense if a shift within aggregate demand takes place.

The debate is also taking place as the revised 2020 NBCC and the American-based International Building Code (IBC) move to permit 12-storey (composite) tall wood buildings and provinces with municipalities already approving tall wood buildings using site-specific amendments. Finally, one wonders how much Alphabet’s eye-catching proposal dominated by tall wood-based architecture on Toronto’s harbour covering from 12.8 to even over 80 hectares, is worrying the CAC.

That said, there are a number of core areas where the interviewees revealed significant substantive differences including safety, de-carbonization, costs and economic impacts. 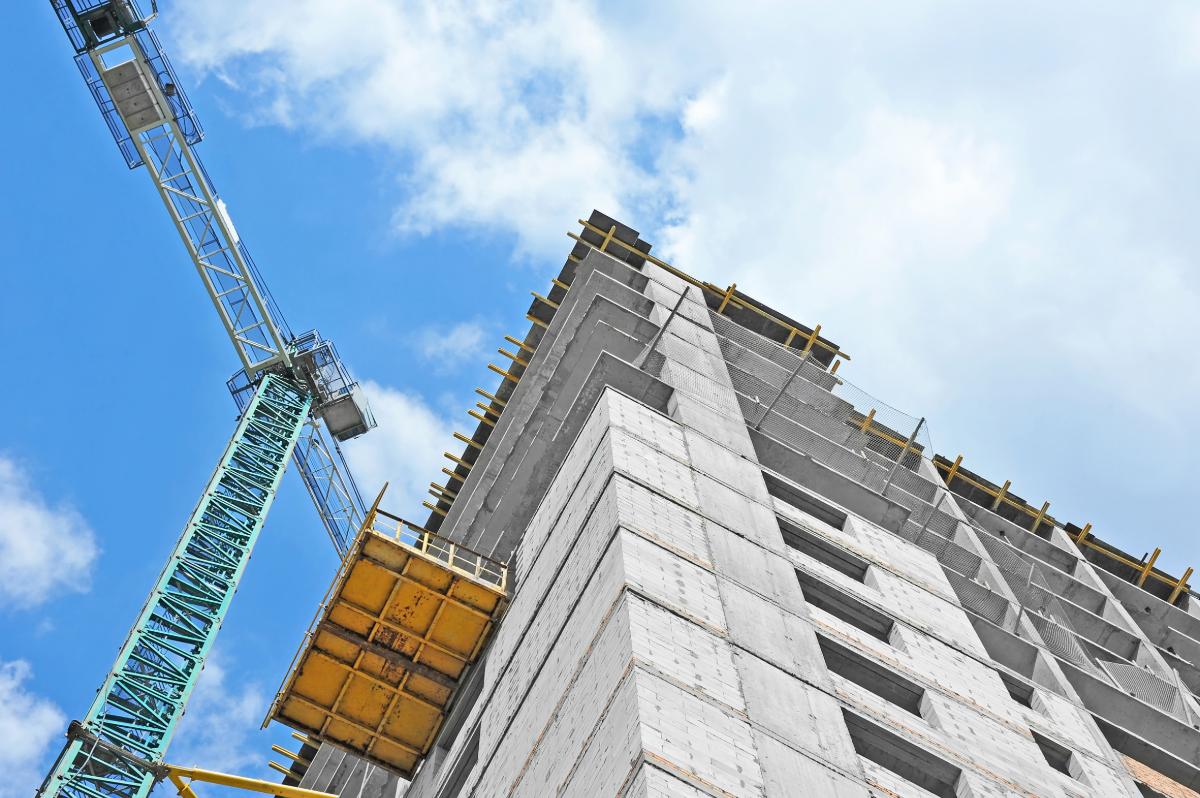 Concerns about the safety of tall wood structures go to the heart of potential tenants’ acceptance. One survey found 68 per cent of respondents remained sceptical. While McSweeney focused on seismic concerns, McGrath raises two concerns with fire. The first is that fire risk is much higher during wood-based construction resulting in insurance rates seven to 10 times higher. “This is why with our code process,” he says, “we had to institute a myriad of additional fire code provisions in addition to the building codes to manage the increased risk on these very susceptible combustible construction projects.”

More generally, he argues “you are adding fuel to the fire, whereas concrete absorbs a fire’s heat with a given fuel load and the internal temperatures are lower for a concrete structure than they are for an exposed wood structure.” To be fair, his key concerns are with exposed wood and with jurisdictions approving tall timber projects without necessarily following the pending 2020 NBCC.

While McSweeney raised concerns about approving tall wood in a highly active seismic zone prior to the new code, in our interview McGrath focused more on clarifying what the new provisions will permit. 12 storeys for all-wood buildings will cover only fire while under structural provisions, buildings greater than six storeys in high seismic zones and over 10 storeys in non-seismic zones will require concrete foundations/podiums and cores to resist lateral seismic loads. Buildings higher than 12 storeys will need special alternative solution permits. “If you can produce a design and demonstrate that you’ve provided equiva­lent safety in your 17- or 18-storey structure that you would have in your 12-storey building, you are allowed to build it,” he concedes.

Moonen strongly defends the seismic performance of wood, arguing it absorbs rather than transfers energy while concrete does the latter. He references considerable successful testing of wood’s seismic performance using shake tables, one replicating the power of the 1995 Kobe earthquake on a full-scale seven-storey mock-up. The key point for all materials, he says, is the quality of the architect, engineer and contractor.  “We fail materials; materials don’t fail us,” he concludes.

Without doubt, governments and media take as a given wood’s considerably better performance on greenhouse emissions. This, argues Auer, is being “increasingly challenged” by even environmental advocate. The IISD study concludes, he says, that when a full and proper LCA is applied, “up to almost 3/4 of a wood product’s carbon footprint might not actually be accounted for in the common life cycle assessments.” IISD’s six tested scenarios, taken together, show no product has a marked advantage. Those championing wood’s carbon benefits, he adds, also “discount…. the strategies to improve the carbon footprint of cement and concrete” which he followed with a list of such achievements. He also argues materials are but a small contributor while building performance will play a much more substantive role in reducing emissions.

Moonen disagrees, saying “When buildings have been compared or wood, steel and concrete is being compared with each other with the same structure, wood comes out with a lower life cycle impact.” When asked for actual studies, he cites Substitution effects of wood-based products in climate change, written by eight international scientists including Carolyn Smyth of National Resources Canada, which examined 51 LCA studies. While over 90 per cent favoured wood, however, the report found significant variations in the level of benefit, signaled the need for further work on carbon loss during harvesting and estimated only a minor emission reduction through substitution. Moonen dismisses the IISD report’s pro-concrete scenario as based on “completely outlandish” assumptions given Canada’s impeccable forest management regime. But he does concede additional refinement of LCA models may be required.

Again, governments and media frequently suggest tall wood is a cheaper option. Not true, say Auer and McGrath who point out that wood requires considerable adaptation and all tall wood demonstration buildings have received some public subsidies. Concrete also has a cross-country presence while tall timber producers are fewer (there are currently three cross-laminated timber producers in Canada with one more soon to open).

Moonen agrees with Auer’s point that there are just too few tall wood structures to settle the point. There is, however, an important caveat. Although Karim Khalifa, Alphabet’s director of innovation at Sidewalk Labs recently told the Globe and Mail that mass timber is indeed more expensive, it is still in its infancy. Like solar and wind technology, as the market expands and more producers emerge, there could be significant reductions in cost.

McGrath and Auer strongly assert that the CAC is not concerned about potential loss of market share. That said, the CAC’s March release and McGrath’s own statement that “The idea of artificially suppressing jobs in one sector to create a few jobs in another is not a net gain in job creation” does suggest a zero sum game at play. Moonen does not see it quite the same way. He argues the real opportunities for job expansion will be increasing value added manufacturing while strict public forest management controls will cap wood’s market penetration.

Barring a major Hindenburg-type disaster, tall wood’s share will grow, albeit primarily as composite wood/concrete structures. Increased modularization will help concrete compete while also offering an economic wedge into the under six-storey market as it has already done through Marriott’s smaller hotels. And as McGrath and Moonen both admit, significant work remains to drag the conservative construction sector fully into the 21st century.

Wood and Concrete, a Material Perspective: Cement Association of Canada