In the days that followed, the work started to come together. In addition to bright colours, icons appeared. One icon had two crowns, clearly meant to represent the intersection of King Street and Queen Street. Another icon was a heart; the heart of downtown? Others were less obvious and more open to interpretation. But what was the intent of these new surface markings? Was it urban design? Placemaking? Traffic calming?

Yes! But among city builders, the value of these things is not only self-evident, but proven many times over. For those of us who have tried and failed to bring similar projects to life, the product becomes less important than the process; what we have come to call Bandwagon Placemaking.

Those who work either with or within municipal government know how challenging it can be to launch design initiatives. It can be just as challenging to layer urban design elements over more ‘typical’ project work like road reconstructions. The public expects their tax dollars to be spent with utmost care, and urban design can be considered frivolous or cosmetic to those who have yet to see its value; a common problem for mid-sized cities in particular, where existing interventions may be scarce.

Design or placemaking upgrades are the simplest line items to cut when a project overruns its budget, the perception being (in this example) that cars ‘need’ a smooth surface to drive on, but that good placemaking is a ‘nice to have’. This perception is difficult to change until a breakthrough is made, and people realize the value of urban design through real world projects that they can experience first hand and come to cherish.

Getting to this point isn’t easy. Sometimes the roadblocks pile up and fatigue sets in– navigating a dozen or more stakeholder groups and still coming out the other side with an intact vision can be genuinely difficult. How do you prove that something like this has value to people until it’s already in place?

All of these challenges (and then some) were present on the Queen Street project. However, the fact that it was not an atypically smooth or fortunate process is why the lessons learned here have value; this is a success achieved through persistence, commitment to a vision, and creative problem solving. By creating an implementation pathway that piggybacked on a more traditional municipal process, we were able to provide our urban design program with a foothold; one that clearly demonstrates the value of placemaking in one of the most prominent locations in the city.

How did we get there? We can say with some certainty that if we proposed this streetscape design as its own, separate project, reaction would be mixed, and it would be nearly impossible to gain the traction we needed to see it through. So instead, we jumped on the ‘bandwagon’ that was the Queen Street road reconstruction project– and we weren’t alone.

Many staff, local business owners, community members and other stakeholders latched on to the road redesign as well, to forward a number of objectives. One was to reposition the adjacent Goudies Lane from a service lane to a place for art, culture, and public enjoyment. The project also completely redesigned Vogelsang Green, taking a small urban park that had some poor environmental design and creating an open, well appointed new public space. Another small public space was created two blocks to the south, replacing a surface parking lot with some greenery and seating. Placards were embedded in the newly-widened sidewalk, memorializing historical businesses that had lined the historic Queen Street in the past.

It’s possible, even likely, that none of these interventions could have happened independently. Their viability was a result of our collective ability to package them up into one, ‘essential’ piece of work– the Queen Street reconstruction project– and to remain committed to their implementation through the life of the project. This included the planning stage, the tender phase and through the end of construction; when there were still some lingering pressures to make last minute alterations.

Typically, a municipality prepares streetscape master plans to help schedule, guide and budget for higher-order road reconstruction projects. These plans are prepared years in advance, helping to ensure that their budgetary impacts are predictable.

In the case of Queen Street, which is at the centre of Downtown, there was an emphasis placed on the quality of the pedestrian experience; wider sidewalks, better pedestrian crossings, better quality public spaces. For the urban design team, there was a clear opportunity to get involved, and an easy to communicate mandate for why we needed to elevate the project– because Queen Street needs to be a place for people, not just cars.

We committed to the idea that we could improve the intersection and create new laneway crossings that would make a clear difference in achieving this goal. We carved this off as our team focus, while remaining plugged into the overall project to keep our objectives aligned and ensure we could deal with whatever was thrown at us along the way. Others did likewise. 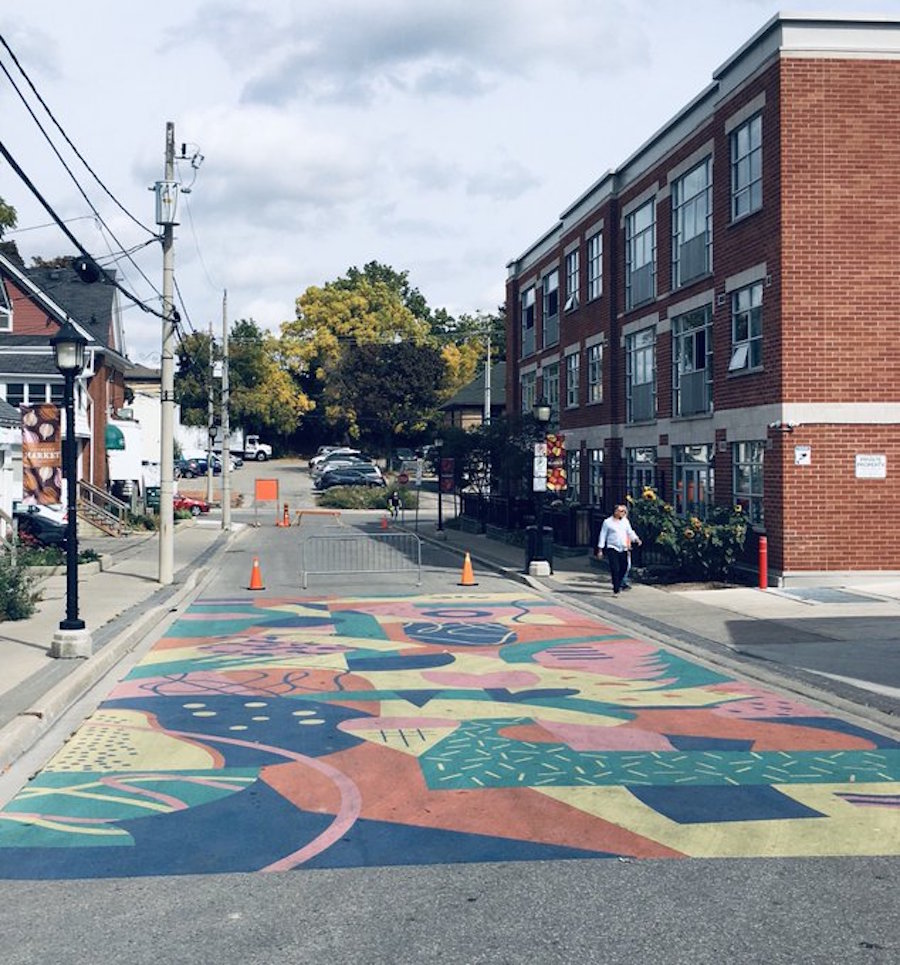 We found a product that would be durable enough to withstand years of traffic and winter maintenance, while still giving us some design flexibility. We spent hours with the manufacturer to understand the constraints of both the material and the installation process, to fully ensure that we could work toward a viable end result while also maximizing how expressive we could be with it. Part of seeing something like this through is making sure there are no sudden surprises along the way.

Because we had time, a clear understanding of our objective, and a predictable project timeline– road reconstructions happen so frequently that cities have a strong handle on the process– we were able to do a suite of public engagement a full 18 months prior to construction. Staff created 8 options that were presented at multiple public events. This helped to not only increase public involvement– an important objective in its own right– but also to get people invested in this kind of placemaking by having the public drive the design.

Ultimately, we received a wide range of feedback, with opinions split on which option was best, but consistent responses on what was good and bad about each of the designs presented. So, rather than choosing the most popular, we set about synthesizing the best elements from all of them, truly representing the input we received from the community. In this way, it became something more than we could have predicted.

From that point on, our job was to make sure this remained in the project scope between the fall of 2018 and the summer of 2020. By attaching this work to the project tender early on, this was slightly easier than it might otherwise have been, but still required us to sidestep a few process landmines, ease the minds of several unconvinced stakeholders, get creative with our budget, and more.

At times it was challenging to keep our momentum, but in that last week of September, we watched as coffee shop patrons sat outside, commenting on the installation and the design as it unfolded. We noticed people posing next to the crown icon to post pictures to their social media. And we were delighted as the overwhelmingly positive reactions began pouring in, reassuring us that this was the right product, at the right time, and that our ‘bandwagon placemaking’ approach had paid off.