Toronto is looking at Inclusionary Zoning as a tool to help its affordable housing problems, but the way forward is anything but clear.

Canadians tend to smugness when comparing our social safety net to our southern neighbour. But comparatively, our support for affordable housing is weak following the gutting of social housing expenditures in the late 1990s. Only the Federal Liberal’s Canada’s National Housing Strategy issued in November 2017 finally recommitted significant funding. Beyond social housing, however, cities like Toronto and Vancouver have major challenges ensuring affordable housing for households who fall in the 30th to 60th percentiles incorporating lower middle-income workers, technicians and even professionals.

Toronto’s Housing Need and Demand Analysis (May 2019) produced sobering statistics. Renters now constitute 47 per cent of households and growing, with 40 per cent struggling near the bottom 30th percentile of household incomes. As a result, 23 per cent pay a whopping 50 per cent or more of their incomes on housing while almost half pay over 30 per cent, according to the CMHC’s benchmark for affordability. (For homeowners the figures are better but still deeply troubling). Almost 20 per cent of renters also live in “unsuitable accommodation” defined as having inadequate bedrooms. Supply trends are equally problematic with limited and much less affordable purpose-built rental coming on stream and most new rental stock limited to condo towers.

The sobering reality is even vigorously funded public subsidy programs are unlikely to provide enough resources to resolve this crisis. In the United States this has been recognized for some time through inclusionary zoning (IZ) policies that are now being embraced by both Toronto and Vancouver.

Inclusionary Zoning and how it Works

Inclusionary zoning is about ensuring a percentage of units in private sector residential projects constitutes affordable rental or ownership homes for lower to lower middle-income households. Over 500 jurisdictions in the U.S. enforce IZ provisions directed at household incomes, usually in the 30th and above percentiles. Although sometimes completely free of any public subsidies, taxes as well as parking and development surcharge relief may sweeten the pot. The primary incentive, however, is an increase in zoning density. Under “voluntary” inclusionary models, the requirement is triggered when a developer seeks a density increase for a site. In “mandatory” models, such as in New York City, the city proactively upgrades zoning in targeted areas and subsequently requires any development to provide affordable housing. Units may be rental or ownership, although rental appears to be favoured (a 75/25 split in New York).

As inclusionary zoning is an alternative to public subsidy, there must be an incentive for a developer to seek (or accept) density greater than the existing as-of-right zoning in exchange for affordable units. That incentive is increased land value sufficiently above the existing as-of-right value to offset increased cost. A feasibility analysis determines which urban areas are developing strongly enough to support IZ as well as the appropriate ratio between zoning uplift and percentage of affordable units required. Who manages the affordable units, how long to maintain a unit’s affordability and minimum threshold project size are other key issues.

What was heartily voiced at a Toronto presentation last November on this topic was the need for three core requirements for success: a defensible financial assessment of viability; predictability for developers; and strong accountability mechanisms to ensure ongoing compliance.

Search for a Workable Canadian Approach

Over the last three years, Ontario has been wrestling with implementing inclusionary zoning, made more complex by a significant shift in the provincial government. But if Toronto is currently marking time in a shifting regulatory haze, Vancouver appears to be out in front. Since 1998, Vancouver has required 20 per cent of land be set aside for social housing in large scale residential developments. Over the last 10 years, given the decline in senior government funding, the city also requires all new or amended community plans to require a minimum of 20 per cent of floor area to be social housing built and deeded to the city.

Based on the city’s estimate that 53 per cent of households are renters and 40 per cent of those fall within the $30,000 to $80,000 income range, Council concluded Vancouver was nowhere near generating enough supply of affordable housing. As part of its 2017 Cambie Phase III – Oakridge Town Centre Plan, inclusionary zoning provisions require 20 per cent of units in any all-rental buildings to be below market rents, affordable to households earning between $30,000 to $80,000 per year. In condos, the required percentage of social housing must be from 20 to 30 per cent. The trade-off for developers includes greater density augmented by lower parking requirements and waiver of city development cost levies. 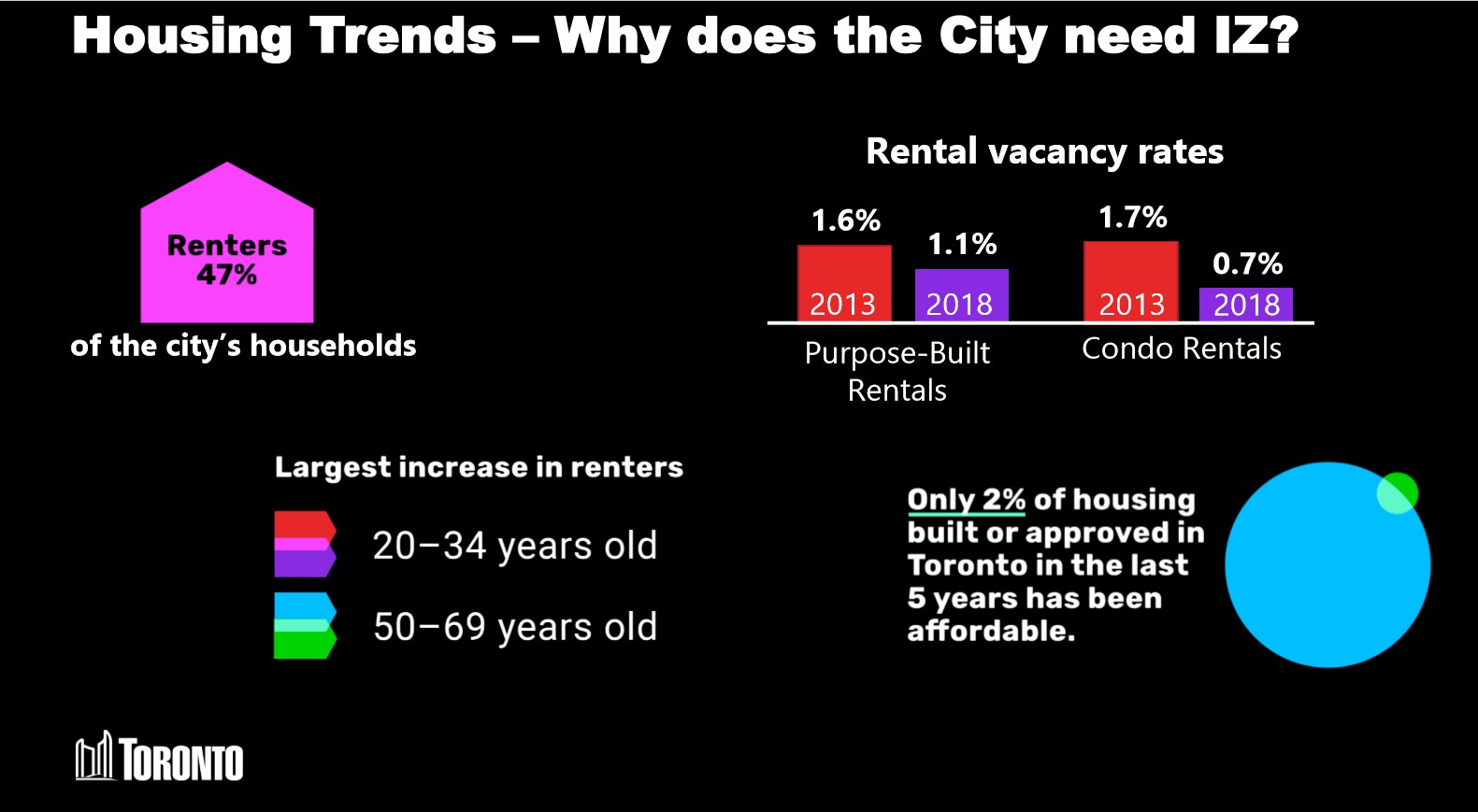 In Toronto, Section 37 of The Planning Act has been used to enlist private sector developers in creating designated affordable units in the absence of funding from senior governments. For example, Richard Joy, Executive Director of the Urban Land Institute, credits ex-city Councillor and later Liberal MP Adam Vaughan, with achieving IZ using Section 37. While this January, the new Federal housing policy committed $200 million to produce 366 affordable units in Westbank Corp.’s five-tower Mirvish Village development, the big push is to move from an ad hoc Section 37 approach to a clearly legislated IZ model. This was initiated by the provincial Liberal’s Promoting Affordable Housing Act, (December 2016) and its enabling Regulation 232/18 issued in April 2018 (which just beat the June election win of Doug Ford’s Conservatives). Undeterred, Toronto forged ahead producing two required analyses to kick-off public consultations over last summer. The first was the Housing Need and Demand Analysis referenced above, a compelling case for action. The second, and this lies at the heart of the model’s feasibility, was the Evaluation of Potential Impacts of an Inclusionary Zoning Policy in the City of Toronto completed by N. Barry Lyon Consultants (NBLC) for the city.

NBLC’s Evaluation concluded “in most high-growth test locations, the IZ policy scenarios tested were found to be feasible,” particularly in the downtown and around transit stations. Also in May, however, the Conservative government proposed Bill 108 or More Homes, More Choice Act, signed into law in June 2019. Subsection 5 limits inclusionary zoning to protected major transit station areas or where the Minister of Municipal Affairs and Housing orders a “development system order.”

Perhaps the most problematic new requirement, noted already by NBLC, is the obligation to update “out of date” zoning before IZ provisions can be applied. Joy supports this requirement, saying “the problem in Ontario is that it is very difficult to ascertain [a real advantage] when most of our municipalities deliberately under-zoned most lands and are, therefore, requiring almost all developments to go through a rezoning.” In other words, owners’/developers’ formal as-of-right land value/zoning frequently does not reflect actual value, including the price paid by the developer. If revisions significantly increase value/zoning, it may limit the amount of uplifted density available to offset IZ costs.

Finally, the Act requires eventual substitution of what Joy calls the now-weakened Section 37 with a Community Benefit Charges (CBC) model. Both models reflect the idea of recovering value uplift when a municipality provides a benefit. There may emerge, therefore, a delicate competition between parks, community centres, other public amenities and affordable housing. Waiting to find out how this all plays out presents challenges to advancing the city’s required update, says Christine Ono, a Senior Planner in the City of Toronto’s Planning Division.

Eventually, the city may or may not reconsider several key parameters given feedback from last summer’s consultations. They include:

Consultations re-enforced enshrining full integration of affordable units into projects such as common elevators/spaces and services. Off-site units will be allowed but payment-in-lieu is prohibited by the legislation. In addition, partnerships with non-profit agencies for implementation and administration found considerable support.

In all, evidence-based IZ programing remains a committed part of Toronto’s affordable housing playbook, but Ontario’s current lack of regulatory clarity is slowing the implementation progress. Conversely Vancouver is moving ahead quickly and with more assuredness.