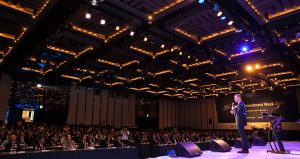 “I’m especially pleased that I can meet all of you during the most beautiful season in Korea. I welcome all of you to Korea.”

Man-Gi Jeong, the Korean Deputy Minister of Trade, Industry and Energy, made these remarks at the Grand Intercontinental in Seoul, to a 1,300-strong audience during Foreign Investment Week, and he was talking about the early autumn weather: mild, pleasant and welcoming. But he may as well have been referencing the investment climate in the small but dynamic peninsula, which consistently falls in the top tier of measurement and progress indices.

The Korean population is almost 51 million strong, of which fully half live in the capital, Seoul, and its immediate environs. Highly urbanized and educated, Korea is third in life expectancy,eighth in median household income, with a literacy rate of over 97 per cent. It has free trade agreements with three-quarters of the world economies, is the seventh largest exporter and fifth largest importer. It has the fastest internet speed in the world, as well as the world’s highest level of smartphone ownership. Korea has a strong belief in openness and transparency in government.

According to the 2015 World Bank Doing Business Report, Korea placed fourth out of 189 countries. Not content to sits on its laurels, the Deputy Minister stated “Korea is continuously making efforts to create the world’s best investment environment by carrying out reforms in the four key areas of the economy —the labour market, the public sector, education, and the financial industry. In fact, Korea introduced the Foreign Investment Ombudsman System for the first time in the world to resolve the grievances of foreign-invested companies.” With respect to the country’s reputation among the foreign investment community, it is worth noting two other metrics: Korea was named the world’s most innovative country by the Bloomberg Innovation Index; and most recently Standard & Poor upgraded the country’s credit rating from AA- to AA, with a stable outlook. 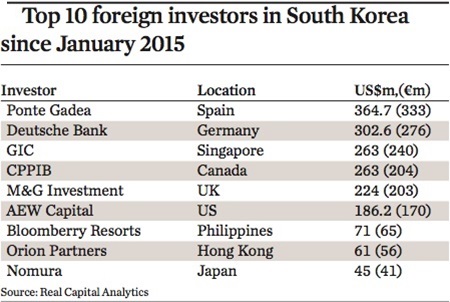 On this last and important point, the Minister explained “…strong economic growth, continuous improvement of external soundness, [and] sufficient fiscal and monetary room as the reason for the upward revision. This rating is the same with that of advanced economies like France and the UK. Given the downward revision trends of national credit ratings across the globe, it is no exaggeration to say Korea’s strong economic fundamentals are being highly recognized by the world.”

In order to showcase those fundamentals, over the past decade Korea has rolled out the framework for a series of Free Economic Zones (FEZ), designed to promote investment and business development from foreign companies and governments. The Zones are dedicated to providing a business-friendly environment to multinationals through a combination of infrastructure clusters, taxation and regulation incentives, and smooth administrative services, as well as attractive living scenarios for employees and families. The ultimate goal is to make Korea the business hub of Northeast Asia. 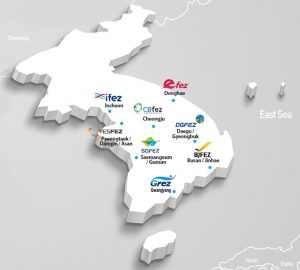 As part of the showcase of the country and its opportunities, arrangements had been made for a small contingent of journalists and site inspectors to tour several of the FEZs. A Korean Air Airbus 321 departed Seoul’s Gimpo airport shortly after sunrise to deposit us in Busan, in the country’s southeastern corner. The flight was a few minutes less than an hour, and I reflected on the short internal transport distances as well as how proximate the country was to other major centres of commerce, banking, and industry.

From Seoul, Tokyo and much of Japan is under two hours’ flight time, likewise Shanghai, Beijing, most of coastal (and manufacturing) China and the Russian port city of Vladivostok. Taipei is a little over two hours, and even the financial centre of Hong Kong is still only three hours away. Over a quarter of the world’s population lies in Northeast Asia, and the region generates almost 20 per cent of the world’s GDP. Being peninsular, the country also has immediate access to the global sea lanes and has invested heavily in maritime and port infrastructure. Busan, where we had just landed, has the country’s principal deepwater port, one of the 10 largest in the world.

We were bused to the BJFEZ, the Busan-Jinhae Free Economic Zone, to hear a short presentation on the future plans of this particular region. We were greeted by the investment promotion director, Peter H.J. Kwon, wearing black-rimmed glasses and a stylish blue shirt. He offered us umbrellas against the mild drizzle. We climbed the stairs of a short observation tower and after enquiries about the journey he indicated the wide expanse of land under development, over 32 square kilometers. “There will be the city hall and administrative offices, and [beyond] that, where you see the white structures, will be the medical complexes,” he said.

We were short on time and he gave a quick rundown of the main statistics of the BJFEZ: a new port being developed, a new port railway for cross-country freight and well-established and mature industry clusters in the immediate vicinity: aviation, shipbuilding, automotive, among others. The project is slated for completion by 2020 at a cost of almost 10 trillion won. From an investment standpoint, the BJFEZ offered substantial tax incentives, education and training subsidies, relocation support and cash grants. The director went on to highlight the planned living situation, with housing and educational, administrative and medical infrastructure for the employees and their families. He even referenced the year round mild climate, and in the soft rain, the setting seemed idyllic.

Next stop, the Daegu-Gyeongbuk Free Economic Zone (DGFEZ), and another briefing, this time inside with PowerPoint slides and an engaging presenter. He spoke specifically about a planned luxury golf course and resort that would be built against the coast. He spoke with passion and enthusiasm, and the scope of infrastructure was compelling. This was merely one development among a myriad. At a macro level, the DGFEZ was planning on several field-specific districts, including the Suseong Medical District, a healthcare cluster establishing medical centres and scope for foreign medical tourism; and the Geyongsan Knowledge Industry District, with a focus on development and building of construction equipment and medical devices. The local human resource pool was impressive; the region is home to over 50 universities and colleges, generating 70,000 graduates annually, 17,000 of whom had engineering backgrounds.

The day prior we had visited the YES FEZ (Yellow Sea Free Economic Zone) and the day after were slated for the Incheon FEZ, near Seoul’s main international airport. At all regions the briefing packets were glossy, detailed, and open, with data and testimonials. As we moved to board the bus to go to the next site, the obligatory photo op presented itself, and all the dignitaries and our crew lined up. The prevailing attitude across all the sites was earnest. Everyone was genuine and welcoming and sincere, wanting the investors and journalists to like the country. But the sincerity was backed up by numbers and data, and in the mild air, it was hard not to be convinced by both.

Seoul’s popularity has risen dramatically in recent years, reflecting higher investor interest in Asian gateways offering core product. According to one broker: “I love Seoul right now; I think it has bottomed out. Vacancy rates are starting to tighten, and we’re seeing a huge pickup in investment inquiry by foreign funds in Seoul.” While South Korea is not an easy place for foreign funds to operate given the monopolistic tendencies of the chaebols, it does offer “some natural inefficiencies” that provide resourceful fund managers scope for profit.

Stabilized assets are thin on the ground, therefore, because of competition from large local institutions. At the same time, assets that require repositioning offer better prospects. One fund manager gave an example of a corporate restructuring where assets come onto the market as part of a sale-and- leaseback deal: “In that case, if there’s a willingness to either back yourself with the leasing with a good asset management team, or back yourself on doing some refurbishment, it could be a good deal. Obviously a very asset-specific opportunity, but where you believe the fundamentals still support rental growth I think that’s an opportunity that perhaps the locals can’t always bid for.”

Development is not a play traditionally pursued by foreign investors in South Korea, but a build-to-core strategy is also a potentially profitable approach for equity investors given Seoul’s lack of en bloc buildings.

Logistics is another area where foreign investors are looking for deals in South Korea. This can be a tricky space to break into given that the industry has historically been dominated by local conglomerates who prefer to do business with each other rather than with outsiders. That said, as one fund manager said: “There’s a huge need for modern logistics, and none of the big guys are there yet.” This leaves scope for foreign opportunistic funds to develop logistics facilities using joint ventures with large local players.

The preceding is an excerpt from PwC/ULI’s Emerging Trends in Real Estate Asia Pacific 2017.

Tales from the Crypt

Why are homes still being built along rivers? Flooded residents disagree on the …

Too little, too late? The devastating consequences of natural disasters must inform…