“Even if we can’t see what’s coming, our schools are flexible enough to accommodate it.”

A marijuana snooze-ateria? A cellphone keep (in the archaic sense of “keep” as a fortified castle tower or dungeon)? We can all play the mug’s game of guessing which new facility will be deemed essential in tomorrow’s public schools.

Indeed, +VG Architects, an Ontario firm with offices in Brantford, Ottawa and Toronto, strives to “future-proof” its schools. No one there, however, is so rash as to predict what will be the fashionable school facility du jour decades hence. Instead, they keep obsolescence at bay with an armamentarium of school-design essentials that includes open-concept space planning inspired by collaborative office design, “phenomenal transparency,” and built-in flexibility that accommodates an infinitely wide and varied range of teaching scenarios.

“We want to create designs that are not just driven by the needs of today’s curriculum but can adapt to future needs,” says +VG Associate partner Ed Bourdeau. “Even if we can’t see what’s coming, our schools are flexible enough to accommodate it. I liken our approach to a loose-fitting rather than fully tailored suit. You won’t outgrow your suit if you put on a few pounds.”

When his boss, Brantford-based partner-in-charge Paul Sapounzi, speaks about the firm’s public-school practice, he almost sounds like Dr. Pangloss, the enthusiastic, eternal optimist in Voltaire’s 1759 satire Candide, for whom “all is for the best” in this “best of all possible worlds.”  School design is at a historic sweet spot, an unprecedented Goldilocks moment or perfect storm, Sapounzi explains, where imaginative planning and cost-effective building materials have converged. “Thanks to the bricks-and-mortar technology we now have at our disposal, we can build architecturally ambitious schools at affordable rates that meet the Ministry of Education funding model.

“Open-concept learning, for instance, was a really good intention in the 1970s, but school designers back then were never able to make it work. Everything was in one big concrete box with no windows. Everyone worked together in a hippie-commune setting, closed off from contact with other classrooms and the outdoor context. These facilities were bulky, noisy containers with a multitude of kids with very little delineation between age groups and programs.”

For him, it’s back to the future. “At +VG Architects, we’re going back to open concept. But, this time it’s visually open, with phenomenal transparency,” says Sapounzi. Here, he uses a term coined by architectural theorists Colin Rowe and Robert Slutzky in their essay “Transparency: Literal and Phenomenal,” published in a 1964 issue of the journal Perspecta, that’s on the reading list of many a modern-architecture course. The term pertains when “one sees two or more figures partly overlapping one another….The figures are endowed with transparency; that is, they are able to interpenetrate without an optical destruction of each other. Transparency however implies more than an optical characteristic; it implies a broader spatial order. Transparency means a simultaneous perception of different spatial locations.”

Sapounzi continues: “We have achieved open-concept learning by using glazing systems that remove visual barriers, and by adapting collaborative office-planning techniques. It results in a school that has a phenomenal transparency when you enter it. All the facilities communicate themselves visually and psychologically to the child, which provides an intuitive sense of wayfinding within the building. You feel like you’re part of a village, a community, a healthy Jane Jacobs-approved urban environment.”

The Wow Factor Goes To School

Visitors to +VG’s St. Mary’s Consolidated High School in Sault Ste. Marie, Ont., often express surprise that the project was built on a standard Ministry of Education budget. So they say upon entering the focal point of the building, the learning commons; to an impressionable child, the sight must be particularly exhilarating. The soaring, 40-ft.-high, wedge-shaped daylit atrium looks like it belongs in a prestigious, upscale graduate school or university, not a public high school for the Huron-Superior Catholic District School Board.

The design of the learning commons distributes functions and dissolves boundaries between what traditionally have been discreet, disconnected spaces—the cafeteria and library—while providing direct, open access to the other key areas of gym and auditorium. “We were able to make the learning commons as big as it is by merging the cafeteria and library,” says Bourdeau, who headed the St. Mary’s design team. “There’s a room at the side where the bookstacks are secured. As for the library’s reading and lounge spaces, we thought, let’s throw them out into the cafeteria.

“This spectacular room acts as a magnet,” Bourdeau adds. “If kids aren’t in class, they want to be there, either studying, collaborating on class projects with their friends, or enjoying the pretty vista through the glass wall of the distant hills.”

Upgraded carpet tile and groupings of seating and desks delineate the library zone within the larger space. The nearby audio-video zone is a quieter place, intended for students who don’t want to be in the thick of the commons free-for-all.

Reinforced by its central location, the learning commons encourages academic achievement by fostering serendipitous interaction between teachers and students, in addition to student-to-student interaction, which generates a sense of school community.

The design strategy, incidentally, solves the traditional problem of the school cafeteria as a dead zone before and after lunch period. The small stage facing the cafeteria, intended for impromptu presentations, enhances the sense of buzz.

The upmarket appearance of the learning commons owes much to the careful allocation of the budget for finishes. “Some of the wall covering is real redwood veneer, but its use is very limited,” says Bourdeau. “We did a good job of painting gypsum board and matching it closely to the veneer. From 30 feet away, you can’t tell if it’s wood or drywall.”

Thanks to Wi-Fi throughout the school, students can take notes on their laptop computers, regardless of where meetings take place. (St. Mary’s provides laptops for students who don’t own one.) On this point, Sapounzi allows how “You can have bloody Wi-Fi terminals throughout the schools. Who cares? We’re past that technology now. The technology that’s really interesting today is, how do you use sound attenuation, transparency, and secure barriers that still provide a high level of visual communication and psychological sense of community and togetherness in the school without compromising the variety and types of learning environments children need?”

Collectively, these maker lab, discovery centre and learning commons spaces exemplify another method +VG Architects employs to “future-proof” its schools: “micro to macro.” The micro-facility they try to incorporate in all their schools is the four-person coffee shop, inspired by a booth in Monk’s Café, the fictional vintage diner in the sitcom Seinfeld. “Three kids and an educator can sit together and talk and have a small-scale collaborative meeting on an assignment,” says Sapounzi.

The Seinfeld booth and the large learning commons are the bookends of the spectrum. In between are some of the more-traditional learning environments: focus classroom, lecturing hall, theatre and traditional meeting room. 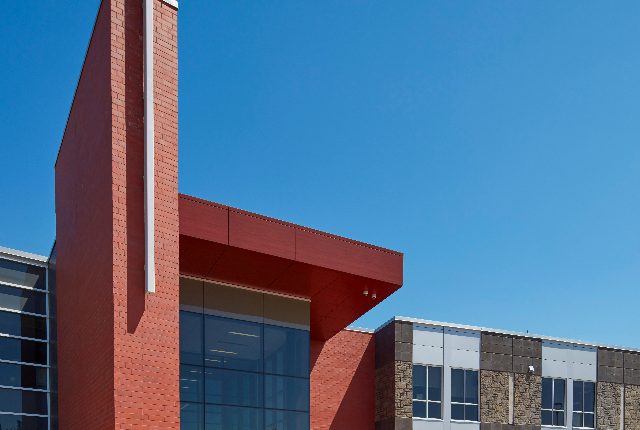 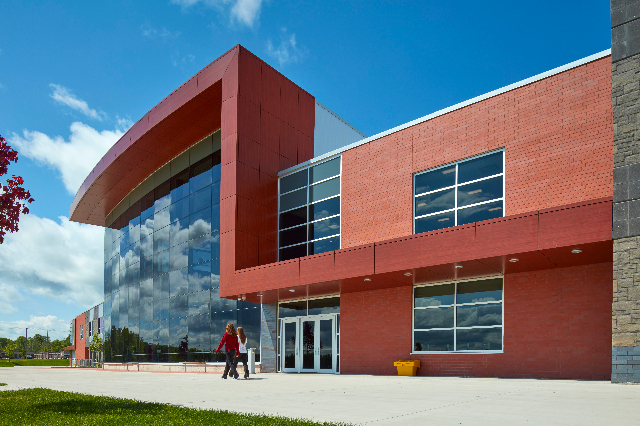 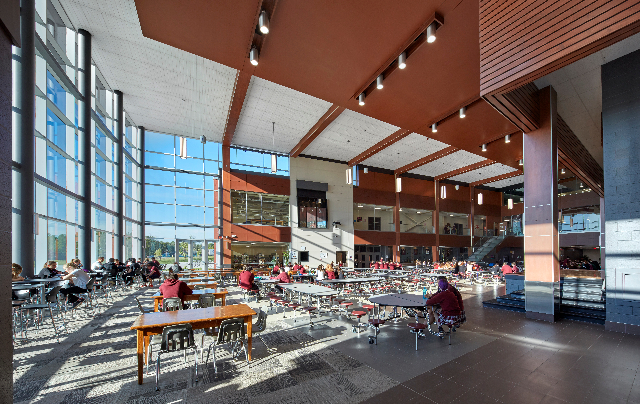 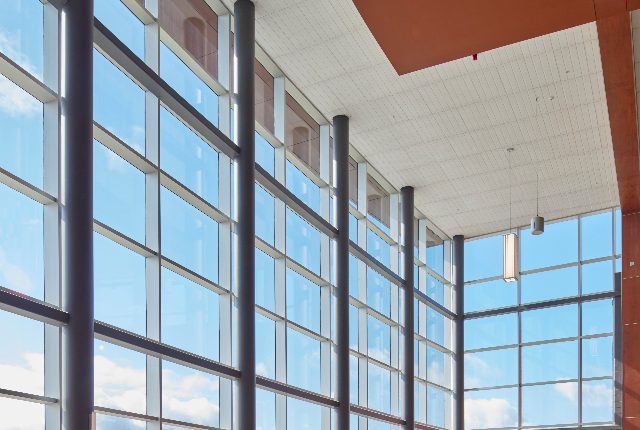 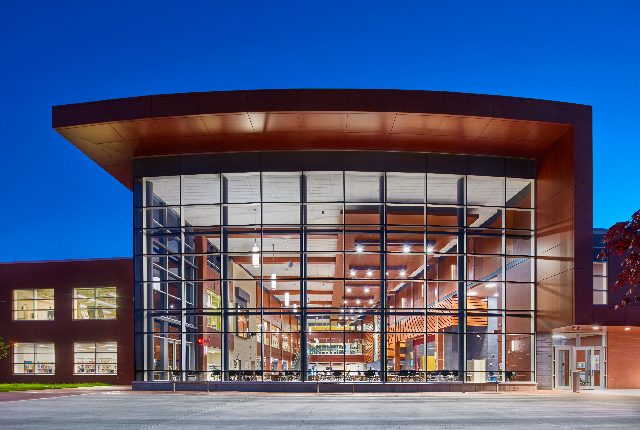 Another way to future-proof a school is to fully embrace the future, and one would think a city like Waterloo, Ont. — the home of Blackberry, the University of Waterloo, the Perimeter Institute for Theoretical Physics and numerous Silicon Valley North businesses— is the perfect incubator for that. As it turns out, however, “more local buildings acknowledge Waterloo’s Mennonite and industrial-era heritage than its high-tech status,” says Bourdeau.

So, as project architect for Vista Hills Public School, he told his client, the Waterloo Region District School Board, “Our design will represent Waterloo’s cutting-edge modernity, and it will look forward to the future in an optimistic way. We try to represent the future in our school projects rather than recreate the past or a pastiche of the past and future.”

Bourdeau’s inspiration plays on a motif near and dear to school kids. “At the time we were designing Vista Hills, the iPhone had just come out in white,” Bourdeau recalls. “We had this idea that, hey, we can do a white curvy outline around black glass and extrude it for this portion of the building.” The white material is aluminum composite paneling, which extends two feet beyond the plane of the glass curtain wall. Mullions in red, green and blue break up the broad glass expanse.

“The colourful curtain-wall elements take the place of the apps on the phone,” he says. “We were trying to come up with a suitable image that expressed the high-tech reality of Waterloo, the city of Blackberry, the two universities and the Perimeter Institute instead of the Waterloo of the Conestoga wagon and Mennonites, which we felt had already been represented enough in public buildings.”

Inside is a pod-style classroom layout: the Waterloo Region District School Board prefers four classrooms grouped around a common area to the familiar configuration of classrooms strung along a corridor like pearls on a necklace. The common area acts as a resource for all the classrooms in the pod and includes a sink, storage cabinets and is outfitted to support computers. The room is frequently used as a breakout space for small groups to collaborate on their projects.

Both schools share similar core interior elements such as full-size gymnasia tall enough for volleyball and has a floor plate large enough to allow regulation basketball games with flanking bleacher seating, learning commons and maker labs, the later an area for collaborative, hands-on learning using new technology and equipment, such as 3D printers, laser cutters, soldering irons or sewing machines, that students may otherwise not have access to.

“Now, finally, we have the architectural part of the technology to create these varying levels of visual and psychological collaboration,” says Sapounzi. “You can slip into private, public, group and focus lecture settings. From one case to the other, there’s a freeness of fluidity. That’s the key to future-ready schools.” 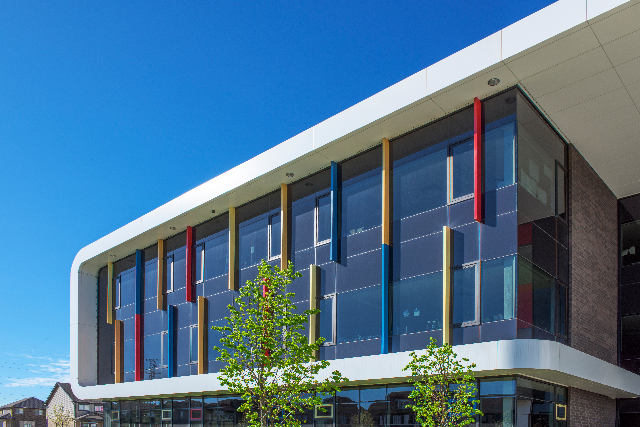 A compact footprint for the school’s plan was required to allow room on the six-acre site for two full-sized playfields, to be shared with the City of Waterloo. 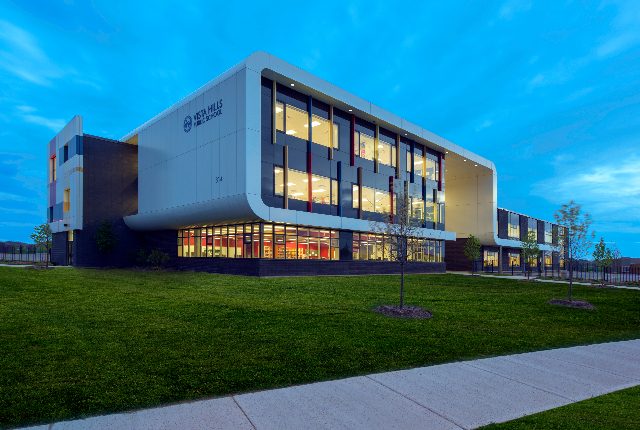 The solution was a partial three-storey plan at the street corner (the portion that riffs on a cellphone) and an adjoining two-storey section for the kindergarten and gymnasium. 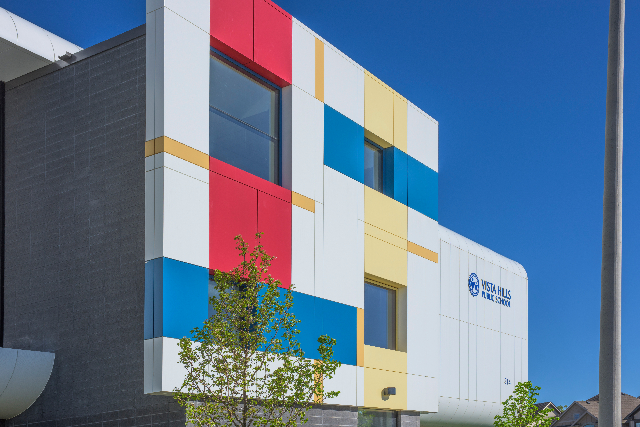 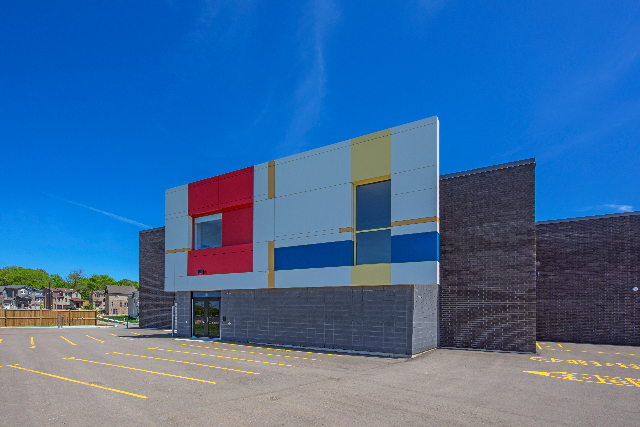 A Mondrianesque boogie-woogie of colour-blocking in primary colours adorns the side elevations at Vista Hills Public School. 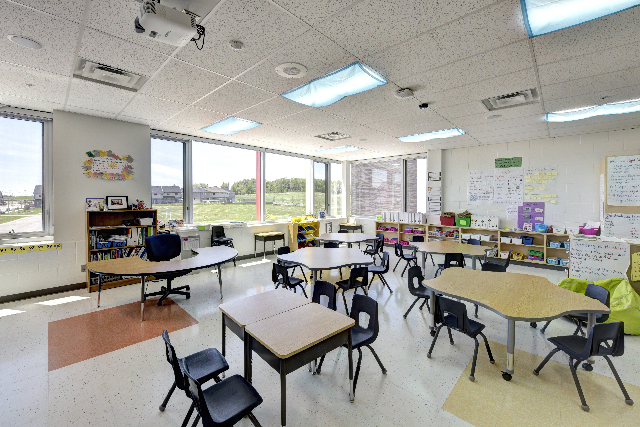 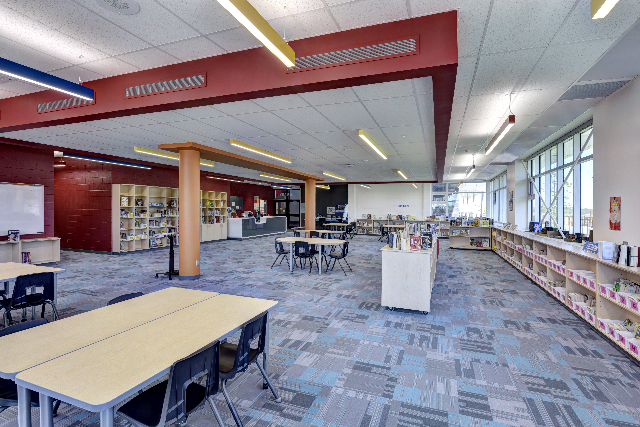 Battle of the Acronyms

When I grow up, I can be a city builder?

Toon Dreessen: What It’s Worth