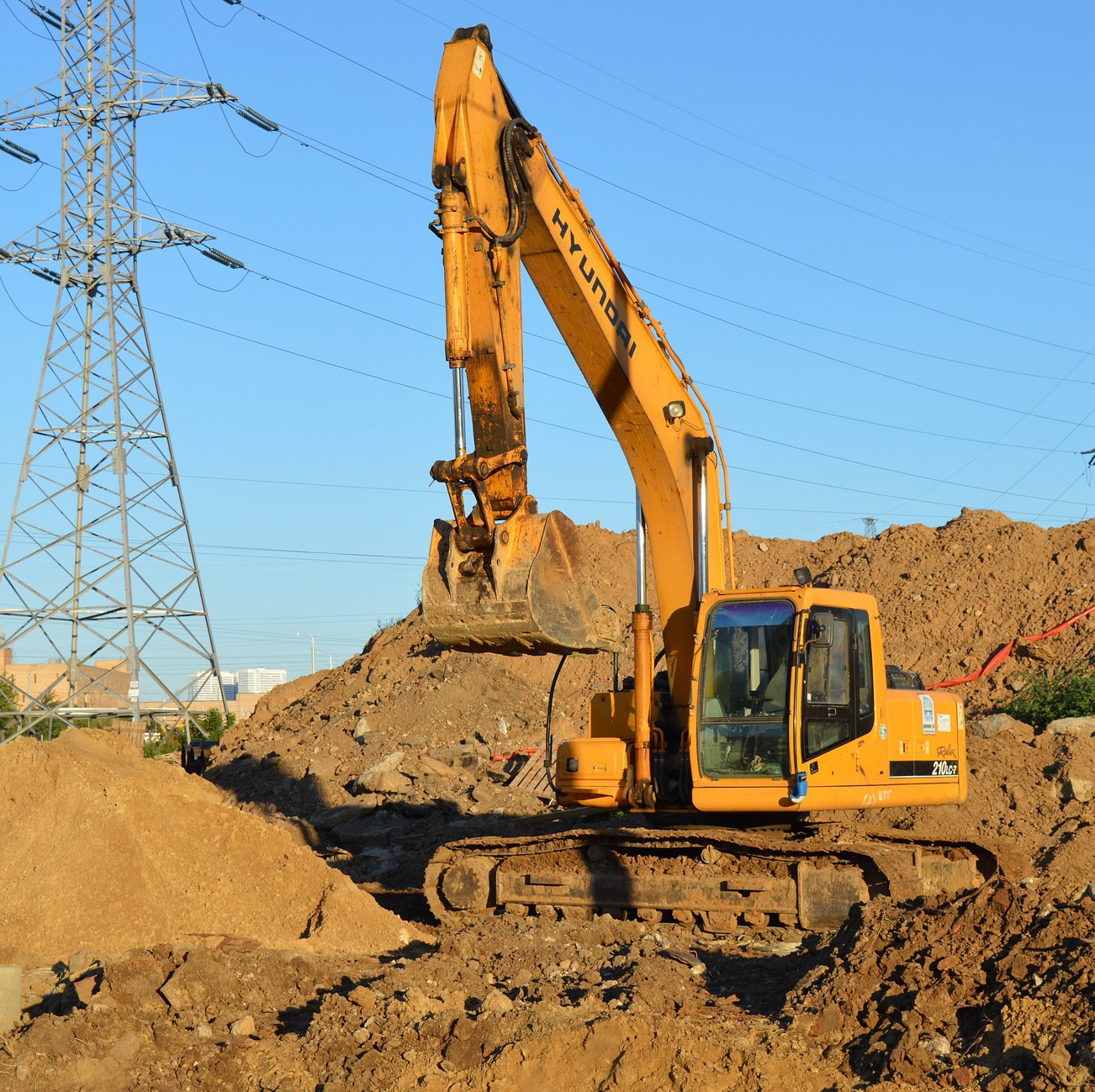 Where does it all go? As Ontario’s cities continue to add population and density, cranes and construction sites are an ever-present part of the urban landscape. But while the realities of construction — and the politics of urban density — are seldom far from public consciousness, a major element of urban development is chronically overlooked, as the thousands of tonnes of soil excavated from construction sites across the country each month pass out of sight and out of mind.

According to research estimates commissioned by the Residential and Civil Construction Alliance of Ontario (RCCAO), an estimated 25 million cubic metres of soil are excavated per year in Canada’s most populous province alone. The excess soil excavated across Ontario in one year would be enough to fill Toronto’s Rogers Centre all the way to the roof 16 times over. It’s a staggering quantity, one that’s hard to square with the lack of public attention and lack of public oversight it receives.

Like many jurisdictions around the world, Ontario lacks a comprehensive regulatory framework to manage excess soils. While regulations exist to ensure soil from brownfield sites is treated safely — with full documentation of soil content and disposal sites mandated — no unified policy exist to regulate the reuse and safety of excess soil from Ontario’s construction sites.

Not all excavated soil is created equal. Many sites have relatively uncontaminated “clean fill,” which can safely and beneficially be reused by numerous industries, including the construction industry itself. Conversely, toxic soils must be carefully remediated or sequestered. The realities of urban land mean that a wide variety of pollutants (ranging from gasoline runoff to road salt and industrial waste) are often found in construction sites. As it stands, provincial regulations already outline some safety limits for various pollutants, but the lack of oversight regarding the condition of source sites creates chronic gaps in knowledge of soil conditions.

Once excavated soil is removed from the source site, it’s often very difficult to find out where it ends up, even though environmentally sensitive solutions exist. Soil can either be sent to an approved/engineered landfill, a clean fill site, or a treatment facility, where it can be safely remediated and re-used. Unfortunately, this is not always the case, as contaminated soil has sometimes even ended up on prime farmland and private property, posing a significant environmental and health risk.

While Ontarians are left in the dark about where excavated soil goes, the recipients are often equally unaware of where it comes from and what’s in it. Meanwhile, as RCCAO Executive Director Andy Manahan explains, the construction industry lobbies for local reuse of excavated materials as native backfill. Yet, the uncomfortable status quo means that most urban soils “must be hauled long distances to designated sites in rural areas,” Manahan writes in the Ontario General Contractors Association journal. Under the current system, the negative economic and environmental externalities are substantial, he explains.

Beyond the costs to transport and dispose of soil, there are other impacts. Extra truck traffic results in greenhouse gas emissions and increases wear and tear on our roads and highways. For example, disposing of the excess soils generated by the Eglinton Crosstown Light Rail Transit project in Toronto will take 150,000 truck trips and produce 60,000 tonnes of carbon dioxide.

Most of the excess soil is dealt with responsibly but a few unscrupulous operators illegally dispose of soils without permits. Although soil from urban road beds often contains salt — viewed as relatively clean — there are cases where soils with more harmful contaminants are dumped illegally. Public confidence in the process is eroded when these situations are brought to light.

Although movement to regulate excavated soil has gradually taken shape in recent years, the industry has remained dangerously unchecked, and the whereabouts of much of Ontario’s excess soil remain unknown. Without a robust and consistent regulatory apparatus, public knowledge of the industry often comes via sporadic white papers and government studies, occasional troubling legal disputes and investigative reports. So where does it all go? In 2019, we still don’t know. 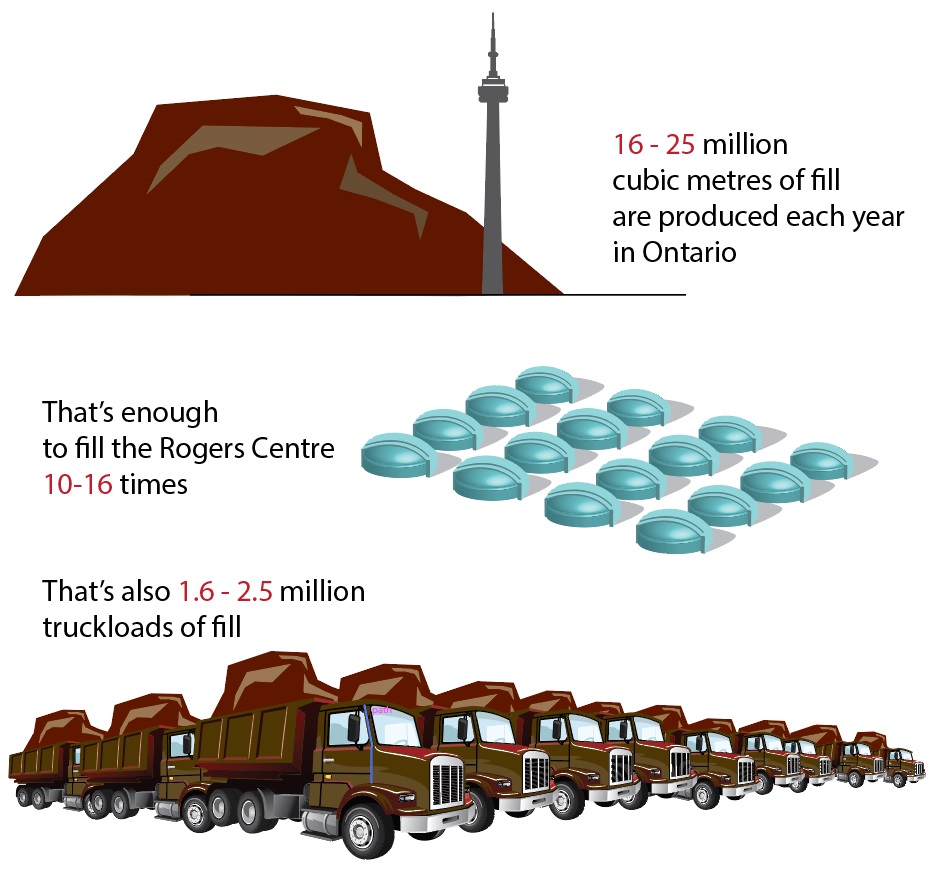 Historically, most of Ontario’s excavated soil has been difficult to track. As commercial construction and infrastructure projects (including public transit) continue to produce millions of tonnes of excavated soil per year, the companies that handle the waste have typically been tight-lipped about their disposal sites and practices. “The dirt guys are very secretive about what they do,” Walsh Construction’s Tom Sims told the National Post in 2013. “If they find a location that is paying for dirt, they don’t want their competitor to know where that is,” said Sims, discussing the dig for Toronto’s Line 1 TTC subway extension.

According to the Post, the total soil excavated for Line 1 and the Crosstown LRT adds up to over 2.5 million cubic metres. In regards to the soil excavated for the Crosstown LRT, TTC and Metrolinx representatives were not able to provide the Post with exact locations for the excavated soil, with numerous sites in Peel region cited. However, the Post’s investigation revealed that the excavated soil “would not go to Peel but to Technicore Underground in East Gwillimbury. When a reporter visited Technicore, a woman gave out another address for the soil: 5338 Wellington Road 125, Erin. This is the address of Mulmur Aggregates.”

A representative of Mulmur Aggregates was able to tell the Post reporters that the soil would likely end up at several sites, though without specific details of how and where excavate would be treated. Similar ambiguity surrounded the soil from the Line 1 subway extension. (For their part, a representative of Mulmur Aggregates told the Post that greater attention needs to be paid to soil excavation during the design stage of infrastructure projects, with the company finding it “burdensome and risky to always be weighted down at the contractor stage.”)

Since 2014, the Hamilton municipality of Flamborough has faced the dangerous consequences of illegal dumping from GTHA construction sites. As reported by the CBC, so-called “fill brokers” approach construction contractors to remove excess soil, offering to pay rural landowners for unknown — and untested — quantities of soil. “It’s almost like a drug cartel,” Hamilton’s former Ward 14 Councillor Robert Pasuta told the CBC in 2015.

In 2016, Environmental Science & Engineering Magazine reported that another “Ontario farmer accepted ‘free’ soils in the summer of 2011, only to find out later that it contained polyaromatic hydrocarbons and heavy metals.” Across the province, similar instances of contaminated soils abound, with the Township of Scugog voting in 2017 to take legal action in order to launch a long-standing remediation plan for contaminated soil at the Greenbank Airport, some of which came from Toronto construction sites.

In Toronto’s downtown, many sites “sit on partially contaminated land, especially those created by lake-fill operations,” writes John Lorinc in a 2012 piece for the Globe and Mail. Unregulated and potentially toxic, the excavated soil is sometimes inappropriately disposed of. Highlighting the lack of accountability and subsequent moral hazard of the industry, Lorinc points to a Pickering landowner who was offered “$8,500 to dump and grade about 500 truckloads of fill on his land” in 2010. Unfortunately, the excavated soil (sourced from downtown Toronto) turned out to be highly toxic. The rancid-smelling earth was contaminated with gasoline, containing “up to seven times the provincial limit.”

In Toronto alone, the record-setting pace of construction creates a near-constant stream of excavation. The excavation process for each new site carves out pieces of earth that in bygone decades would have been used to create the Humber Bay Parks, Ashbridges Bay Park, the Leslie Street Spit, or dumped in ravines. In the 21st century, the era of land reclamation is mostly behind us. Today, provincial growth policies such as the Places to Grow Act and the Greenbelt plan encourage an urban development model while greatly reducing the landform practices that dump excavated materials into the lake. The new result is a fate for excess soil shrouded in mystery.

As the Toronto Star‘s Moira Welsh put it, “Ontario’s lucrative soil industry operates with little government oversight. There’s no regulated tracking system, no proper definition for ‘clean’ soil and not enough rules to govern where the soil is taken.” 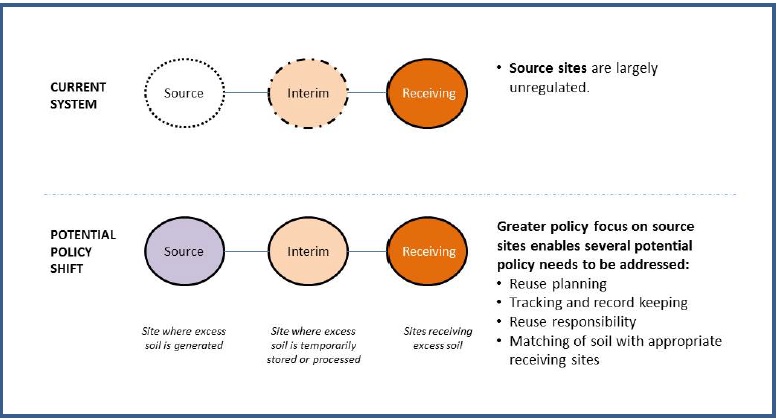 To close the obvious gaps in provincial policy, the Ministry of the Environment and Climate Change (MOECC) has gradually — and perhaps too slowly — moved toward a new policy framework for excess soil. In 2013, Ontario MPP for Wellington-Halton Hills Ted Arnott fielded complaints from constituents about noisy dump trucks full of soil passing through the riding.  Ironically, it was complaints about rumbling traffic and not soil toxicity that prompted the MOECC to take action.

A year later, the Ontario government introduced a series of public consultations that would help shape a draft policy for a new regulatory system. By 2017, the Liberal government prepared a draft of the “Excess Soil Management Policy Framework,” which mandate increased oversight of the excavation process, focusing on the source site where soil is removed. Complementing pre-existing regulations concerning receiving sites, the proposed framework would require source sites to “be responsible for characterizing their excess soil, tracking it, and verifying that their excess soil reaches an appropriate destination.”

In 2017 and 2018, additional consultations and amendments helped shape the policy further. Last June, however, the change of government put a potential wrench in the already slow-moving machine. Nonetheless, the Conservative government is promising to finalize new rules, though the ultimate scope of regulations remains unclear.

In a March statement, Ontario Ministry of the Environment, Conservation and Parks (MECP) spokesperson Gary Wheeler stressed that the ministry is finalizing rules on excess soils, but that additional industry consultation will continue to be undertaken. “Our ministry is committed to making it easier and safer to reuse excess soil and to increase the redevelopment and clean-up of contaminated lands in Ontario,” Wheeler wrote. It’s a potentially promising, if somewhat vague, start for the new government.

As the provincial cogs continue their slow bureaucratic turn, years of activism and concern from both the public and the construction industry have exposed the obvious weaknesses in Ontario’s regulatory system. While the public remains ill-informed about the state of excavated soils, the construction industry is hampered by an inability to safely and efficiently reuse clean and remediated fill.

The solutions are hardly out of reach. Jurisdictions including Québec, the U.K., and the Netherlands all have robust and reasonably effective regulations governing the conditions of source sites and the reuse of soil. In Ontario, a strong and consistent policy framework governing the source sites and safe reuse of excavated soils can have clear environmental and economic benefits. For now, however, the dump trucks continue their journey into the unknown. 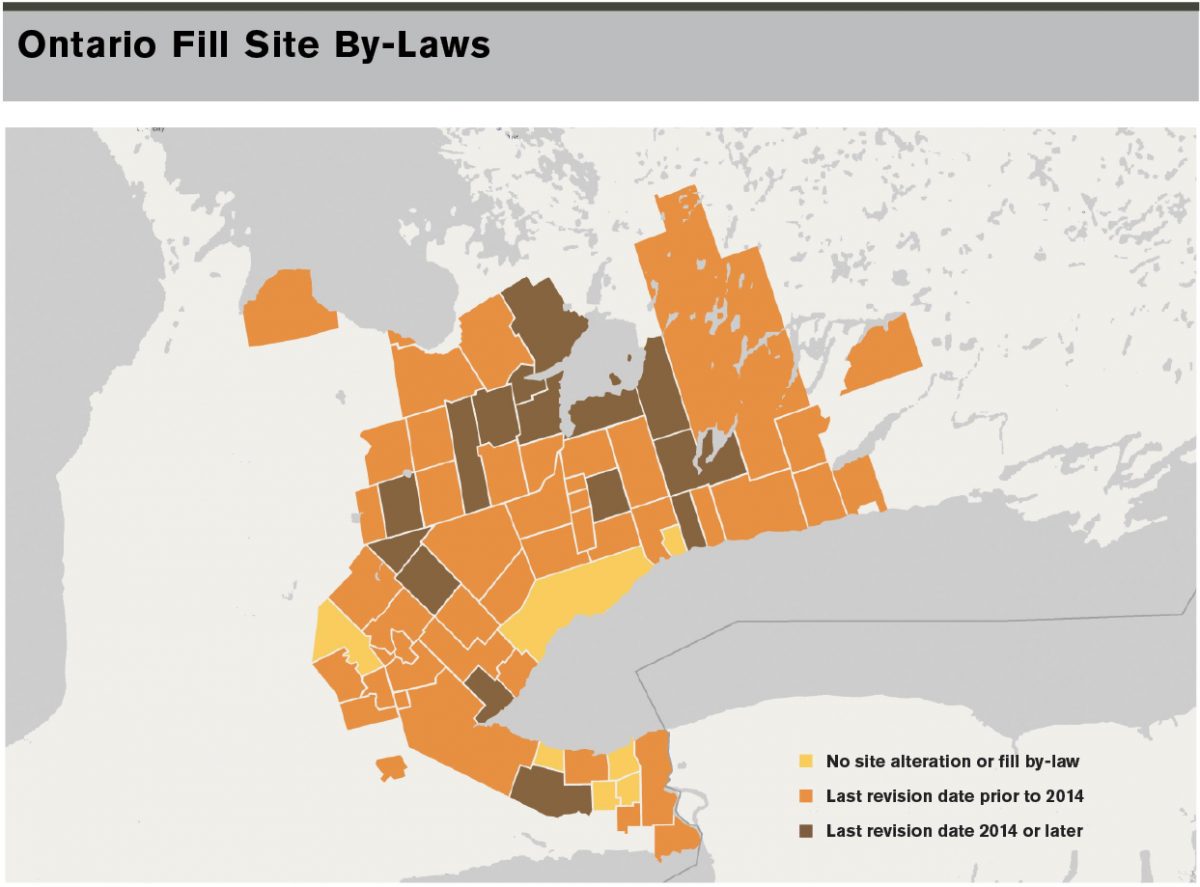 Wood-fibre Insulation Panels: Build It and They Will Come

The New and the Reliable