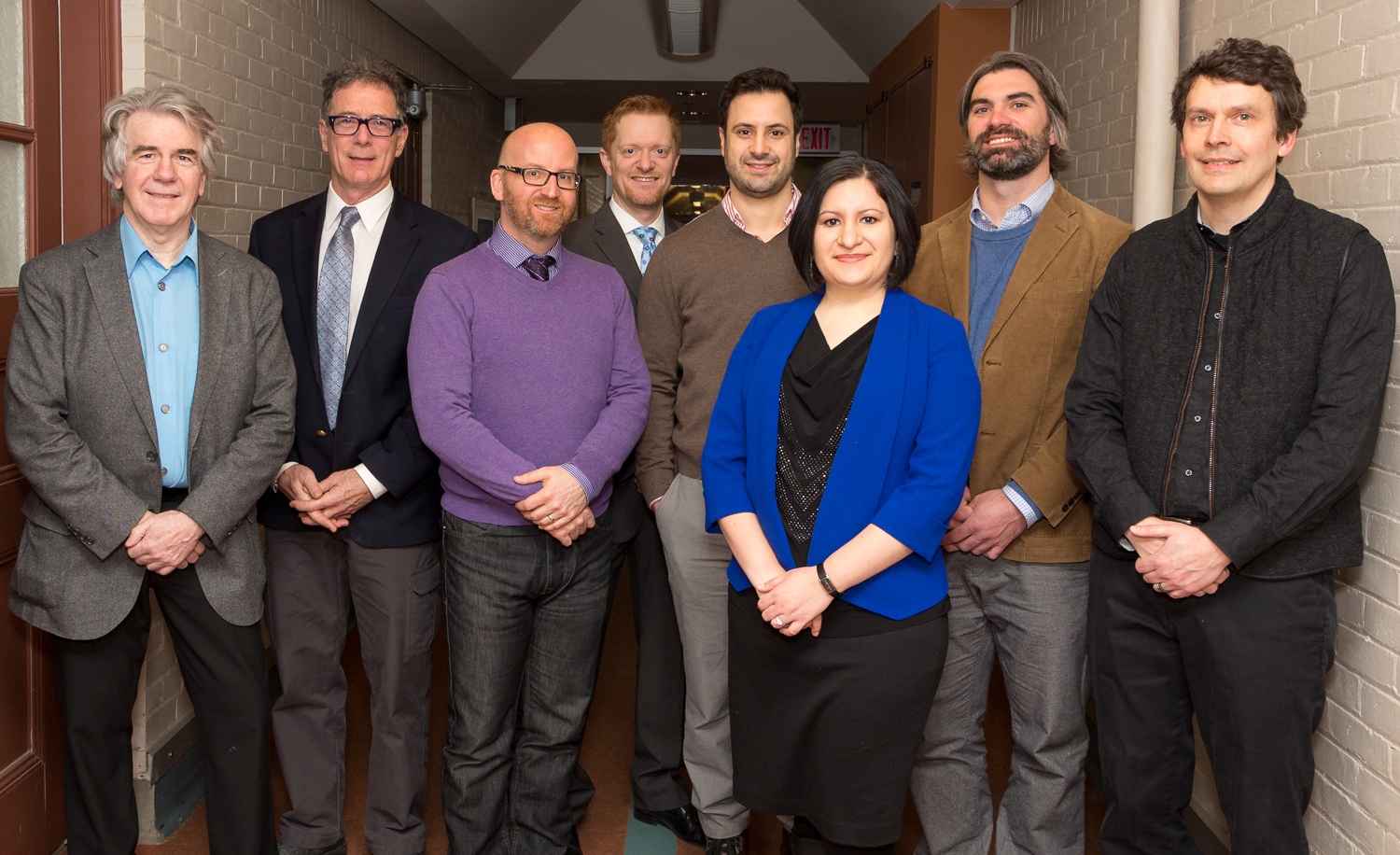 If there is any doubt that universities are akin to self-sufficient towns, let’s look at a few facts. Take any major post-secondary institution in Ontario, and when the population of students, faculty and staff are combined it is often in the tens of thousands, equal to that of a small urban centre. Scores of buildings dot their campuses, varying in purpose from office and student accommodation to classrooms and libraries, sports and theatre facilities, museums and research labs, even ancillary restaurants and shops. The age of these buildings varies too, depending on the school: some are brand new; some can date back to the school’s founding in the 1800s; and then, of course, many are renovated hybrids.

A whole lot of energy is required to run these little “towns.” According to a 2003 National Resources Canada report, universities across Canada that year “consumed a total of nearly 37 million gigajoules, an amount equal to the annual average consumption of approximately 320,000 Canadian households, or of all the private dwellings in the metropolitan area of Québec.”

The numbers surely have risen in the ensuing years – and that was the crux of a roundtable held in early March to discuss energy efficiency in university buildings. Made possible by Independent Electricity System Operator (IESO), at the table were experts from a spectrum of industries including university administration, utility providers, architects, researchers, equipment vendors and more, debating questions such as how do we keep consumption figures from rising further, and what it would take to get them to flat-line or even drop? Solving these questions would mean enormous cost savings for the universities themselves, and greater ecological good for our society. Yet barriers to achieving the answers are many and complex.

A good way to start saving energy is by picking off low-hanging fruit. Easy fixes, such as improved lighting, daylighting upgrades and fine-tuning operational schedules can rein in overspending. Paul Leitch, the University of Toronto’s director of sustainability operations and services on the St. George Campus, recalls one such example: “I was looking at the schedules for a building not that long ago [and found] that we had them flipped day for night … The PM and the AM had gotten mixed up somehow. We fixed that and figure we’re saving on that air-handling unit alone $18,000 a year.”

Of course, one has to measure energy usage before any corrections can be implemented. For example, in a report prepared in July 2014 by the Council of Ontario Universities titled Growing Greener Campuses at Ontario Universities, of 22 campuses canvassed across Ontario only 13 actually had installed energy meters in their buildings.

And, once such fruit has been plucked, things begin to grow more problematic. U of T is large enough to have dedicated staff and executives such as Leitch sussing out ways to improve efficiency, but others may find their human resources don’t stretch that far. A 2013 report, Barriers to Energy Efficiency, co-authored by grad student John Maiorano and Dr. Beth Savan, of U of T’s School of the Environment, found that only 60 per cent of Canadian universities interviewed employ an energy manager, and only 40 per cent have formed a committee to consider energy-related issues. This study also discovered that, despite energy being considered seventh on the list of key issues facing universities over the next decade, “11 of 15 universities interviewed do not have an energy policy, and the process toward implementing energy efficiency projects at universities is generally considered on a case-by-case basis.” One anonymous director outlined the process as follows: “When I have time to do them, I will do the economic analysis and approach administration for funding.”

Studies show that because of their unique requirements, such as needing high air-exchange levels for labs and classrooms, universities are 60 per cent more energy-intensive than commercial offices and more than twice as energy-intensive as manufacturing premises. Concern about energy issues therefore tends to rise exponentially when external pricing starts squeezing university budgets. But those budgets themselves can prove major stumbling blocks to saving.

Barry Sampson, principal with Toronto’s Baird Sampson Neuert Architects, puts it this way: “The whole Canadian model of financing public sector infrastructure is a two-silo model. There’s the capital silo – and it’s always fixed; it’s never flexible – and then there’s the operating silo, and they do not cross-communicate. So you can’t, for example, transfer extra capital costs for LED lighting into the operational silo because they don’t communicate. Universities have all got huge deferred maintenance bills. They’re basically scotch-taping together buildings to keep things operating. There’s no capacity in that silo to finance components in the capital silo that would improve their energy efficiency.”

Adequate access to capital remains a constant worry to university administrators. Internal budgeting procedures aside, they may find their funding coming up short. They may not want or even be able to raise additional funds through borrowing. They are rightly concerned about hidden energy reconfiguration costs, such as reduced service quality, safety and working conditions, extra maintenance, and staff training. And they may be hampered by an administrative rulebook that dictates return on investment over a too-short period of time. LED lights, for instance, are triple the cost of regular lighting, yet will more than make up for that over their eight-year lifespan. Many administrations, however, demand proof of ROI within a five- or even three-year cycle, effectively removing these lights from consideration.

Government policies can establish new ground rules that would push or oblige universities to remediate the status quo. These could be incremental in approach, such as Ontario’s new Green Energy Act, which requires all public agencies to publish energy consumption reports online. Or they could involve actual regulation, such as Toronto’s new Green Standards, which mandate energy- and ozone-saving baselines. Prestigious international projects like Architecture2030 and special industry certification, including BOMA BESt and LEED Gold, give designers and clients alike ambitious targets to aim for.

But all these apply only to new builds. Impetus for change to current building stock could indeed come from above, driven either by a university’s administration or some government agency. Yet that’s not so likely to happen, said Mike Williams, technical director at Rowan Williams Davies & Irwin Inc., a Canadian firm of consulting engineers and scientists: “I got to study in Europe and there it’s very top-down. They have policies and they force people to do it. When I came back here, I found it’s very grassroots and bottom-up.”

The grassroots level requires much more time to impact top decision-makers. Campuses, however, are a great place to find people who care about sustainability initiatives and to cultivate recruits to the cause. Several institutions, London’s Western University for one, have turned the process into a learning experience by publishing real-time energy consumption information on publicly accessed dashboards. “Students, faculty, researchers – they can all go and see how much energy their building is using at that very time,” said Mary Quintana, the facilities management department’s compliance coordinator. “They can see how it compares to other buildings on campus based on the energy-use intensity.”

The flipside of that public face is all the behind-the-scenes monitoring and analysis Western’s freshly updated system allows: “We can detect leaks, we have alarms for backflows on the new meters. [It has] really helped Western manage energy and water. We’re still behind. We have so many buildings that we have to get to. But we have been able to establish targets for the next five years,” said Quintana.

Targets help. And education can build champions for change. Even so, in the here-and-now more is required. Some specialized consultants – mostly engineers and architects – have already stepped up to the plate, undertaking the research and development necessary to solve energy-use conundrums for buildings both new and old. Many suppliers as well now act as partners to large institutions, bringing a wealth of professional expertise to the table.

One such supplier-partner is Sean O’Leary, president of Energreen Technologies, a high-efficiency engineering group. His opinion is that professional partnerships work best when the focus is on the big picture: “From an actual services standpoint – payback analysis, measurement and verification – that’s one thing. But where we find it works the best is having a holistic approach, an overall analysis. We can work with a team and use our experiences at other places and say, ‘Look, here’s what’s working here. Here’s what’s working there.’

Incentive programs from corporate energy partners can also assist universities by offsetting certain financial constraints, said Mark Cammisuli, a consultant with Enbridge Gas Distribution: “The fundamental purpose for incentives, both from the electric side and from the gas side, is to encourage activity above and beyond standard practices.” One example would be window replacement: “If you decided to upgrade from single- to double-pane windows, I can’t give you anything because if you’re going to replace those windows, you’re not going to put more single-pane windows in. We want to see you go with triple-pane, low-emissivity, argon-filled windows.”

This kind of incentivized solution offers a win-win for everybody. Or it would, if every Canadian university had the right fiscal structure in place. According to Leitch, however: “We are not allowed to carry off-book financing. It’s a debt to us. That’s the issue…. I’m going to meet a group today who wants to do all our lighting and they’ll pay for it and they’ll give us a three-year payback and they keep the money. It can’t happen. I have to tell them [that].”

So how can universities break the constraints that have been holding back true energy efficiency? The answer may well lie in an entity known as the green revolving fund. This is a kind of a capital nest egg, a pool of money either raised or set aside solely to support energy-saving, ecology-friendly projects. Cost savings are measured and go back into this self-supporting fund and the cycle repeats itself, over and over again. In his research, John Mariano found that revolving funds not only reduce energy consumption, waste generation and pollution levels, their rate of return often outperforms the market.

He also learned that: “While respondents agreed that green revolving funds are both an effective method to address capital funding constraints, and may be an effective method to implement energy conservation projects at their university, only two out of the 15 universities interviewed and seven out of the 98 universities in Canada currently make use of [them].” His conclusion is that the lack of adoption for green revolving funds indicates a general reluctance at Canadian universities to formalize and prioritize energy efficiency processes. Perhaps this echoes our society as a whole. As Mike Szabo, principal at Diamond Schmitt Architects, put it: “Why is it that people will go out and buy a big-screen TV [that] costs $2,000, $3000, and nobody really says that’s a ridiculous waste of money? But as soon as we talk about sustainability, the first thing that comes up is, ‘Well, will it pay for itself?’ ”

Or, in Sampson’s words: “If one could stop talking about energy costs and talk more about energy balance – see this as a social project – I think we could have more sophisticated discussions about actions that need to be taken.”

There are many reasons to focus on upgrading or modernizing systems for energy efficiency, ranging from reduced operating cost, increased sales, improved employee comfort / effectiveness. There are incentives, rebates, tools and resources available to ensure your business takes advantage of these opportunities to improve competiveness. In Ontario, saveONenergy funding is available through a variety of programs, such as:

To read the print version of this story, click here.

Coronavirus and the Road to Climate Change Recovery