How Deep and How Long, asks Altus Group

As recently as a few weeks ago, Canada was well‐positioned for housing starts to at least match, and possibly exceed, 2019 levels both this year and next. Exceptional growth in both population and jobs last year, alongside lower mortgage interest rates, declining competition from the resale sector (as inventories were whittled down as sales improved) as well as the easing of trade tensions and the imminent (now realized) Canadian ratification of the USMCA, all pointed to a slightly stronger starts performance than we had outlined in our forecast last fall.

That, of course, was before the economic shocks brought about by the double whammy of COVID‐19 and plunging oil prices. As we go to press, the depth and duration of the economic disruption remain very uncertain. The major forecasters in Canada are starting to sharply reduce their outlooks for the economy, with the consensus view that seems to be emerging as of mid March (but literally changing on a daily basis) being a technical recession, with some recovery in late Fall but essentially no growth in real GDP for the year as a whole.

For housing, there is a potential buffer. Short term interest rates have been cut, with the Bank of Canada chopping the target for the overnight rate by a cumulative full percentage point in one scheduled and one “emergency” cut in less than 10 days. This has caused a drop in variable mortgage rates of about 70 basis points on average in the past two weeks (for a five-year term). But the stimulus from rate cuts may not be as significant as some analysts are suggesting, given that five-year fixed mortgage rates were and still are more favourable on average than variable rate mortgages, and rates for five-year fixed mortgages have only moved down about 10 basis points on average over the past two weeks (based on the “special rate” offered by the major banks). Our initial analysis is that larger declines in mortgage rates would be needed to help offset the current economic shocks on housing starts.

Are there any lessons to be learned for the housing sector from the SARS era? During 2003, the prime SARS year in Canada (with the onset similar to COVID‐19 i.e. mid winter), housing starts recorded their best year in 15 years, even though economic growth faltered. Many observers appear to be expecting a similar situation in 2020 – many forecasters who recently slashed their outlooks for economic growth are still expecting housing starts in Canada to remain above 200,000 this year. We believe the situation, however, is not the same this time around. SARS was a very localized situation in Canada, primarily concentrated in Toronto, and with far less impacts to the broader economy. Moreover, housing starts had just started to ramp up, after a very slow decade in the 1990s. 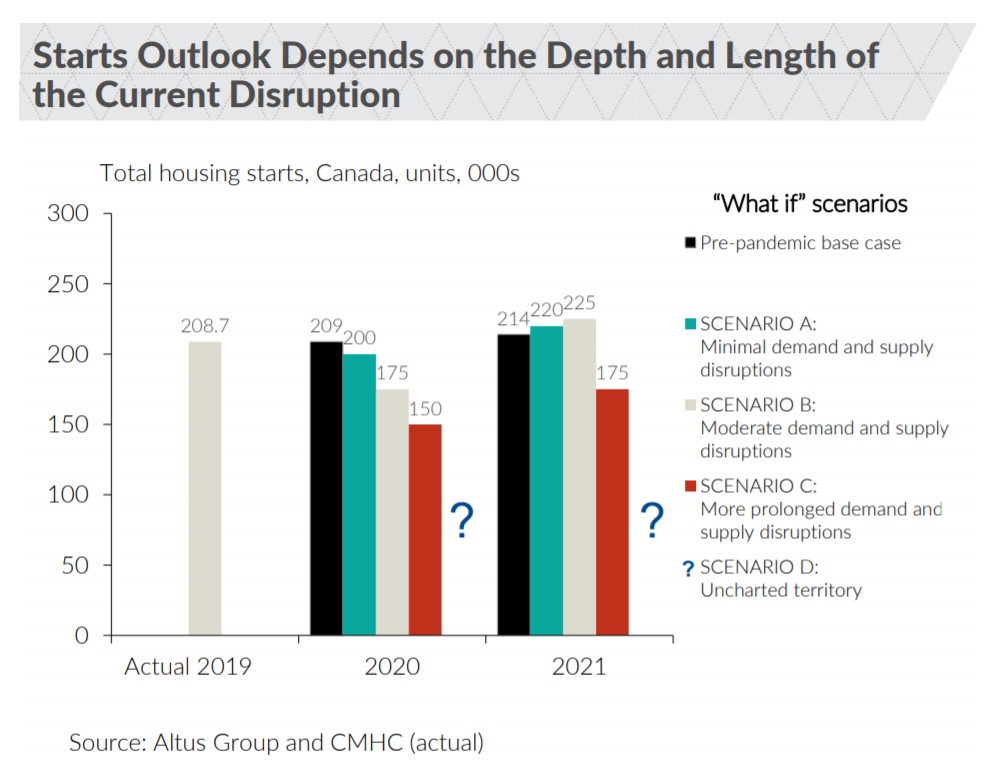 So, what might we see for Canadian housing starts this year and next? The current turmoil makes it too early to provide “best estimates” but we have prepared a few initial “what if” scenarios:

Patricia Arsenault is Editor of the Altus Group Housing Report

Managing a Home Hot Zone – How to Self-Quarantine at Home