Investment activity healthy and demand continues to be strong: Altus

The latest results from Altus Group’s Investment Trends Survey (ITS) for the four benchmark asset classes show a slight decline in the average Overall Capitalization Rate (OCR) at 5.07 per cent in Q2 2018, compared to the first quarter of 2018 and second quarter last year, at 5.10 per cent and 5.15 per cent, respectively. According to RealNet Investment Transactions results, national investment activity volume is up at $13.2 billion from $12.7 billion, comparing year-over-year results in Q1 2018, indicating continued strong demand for properties. Quarter-over-quarter, ITS participants anticipate that cap rates for the benchmark office and retail properties will likely  increase marginally, while multi-unit residential and industrial benchmark properties will see modest cap rate compression. 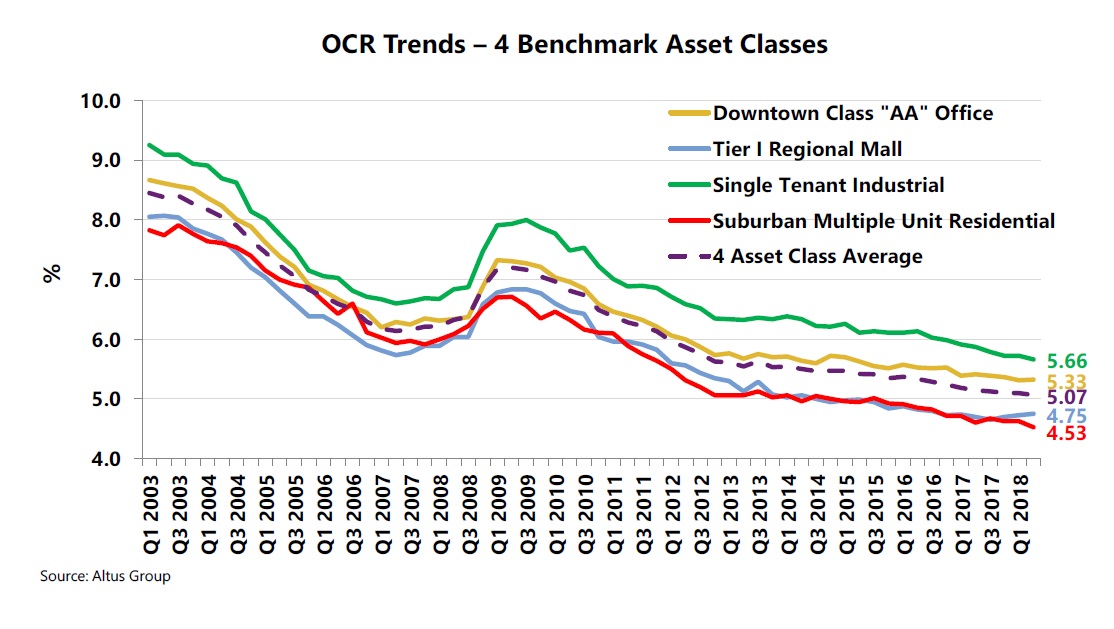 Despite new uncertainty with regards to global trade, tariffs and housing, Canada remains a prime target for both domestic and foreign investors, amid stable growth in wages and employment, and a period of political stability. Of the 128 combinations of products and markets covered, 83 had a “positive” momentum ratio (i.e. a higher percentage of respondents said they were more likely to be a buyer than a seller in that particular segment), 42 had a “negative” momentum ratio and three were neutral. The overall momentum ratio was up from last year. The three product/markets which showed the most positive momentum were: Ottawa Single-Tenant, a boisterous increase from last quarter, followed by Ottawa Multi-Tenant Industrial. Toronto Tier I Regional Malls, although high, have remained unchanged from Q1 2018.

Investor appetite in real estate remains strong. With a rise in employment and a healthy labour market, demand for office in major urban centres continues to witness moderate growth. Office cap rates have increased across Canada for downtown Class “AA” assets, with a slight decline in Montréal and a flattening of cap rates in Ottawa that is largely attributed to a supply shortage as investors look for higher yields in other attractive markets outside of Toronto and Vancouver.

Market highlights for the quarter include:

Building housing on flood plains another sign of growing inequality

Chantal Hébert – In Pursuit of Housing: The Impact of Canada’s Federal Election

Does the Liberal Strategy Really Mean a “Home for Everyone”?