Is the Suburban GTA Low-Density Market Bubbling Up Again? 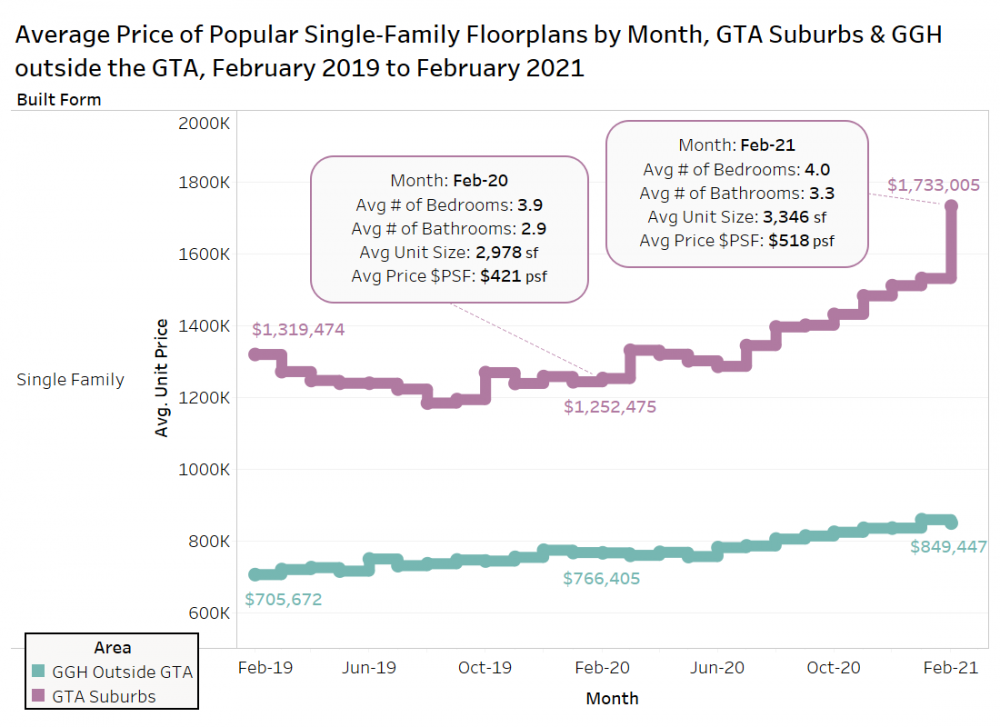 In February 2021, the average single-family (singles & semis) new house price in the GTA suburbs was $1.73 million, up 38% over the $1.25 million average price from February of last year based on BBH pricing data on floorplans viewed by propective buyers. This is a similar growth trajectory as early 2017. That outsized increase in Q1-2017 spurred the Liberal government’s Fair Housing Plan, which included several measure to cool the housing market.

As a reminder, the bubble-like conditions in 2017 resulted in a lost year for low-density sales in 2018 as many developers refused to lower their prices, and others decided not to launch to “protect” closings or valuations in previous phases. Many developers that did launch subsequent phases at lower prices received backlash from previous purchasers and the unwanted media attention.

The average single-family home that prospective buyers were looking at last month in the GTA suburbs was 3,346 sf, larger than the 2,978 sf in February 2020, so the price per-square-foot growth is lower than the end-selling price increase at 23% ($421 psf to $518 psf). This data is not controlling for lot size or location.

Single-family homes in the Greater Golden Horseshoe outside the GTA have increased by 11% annually in February 2021 to just under $850,000, following growth of 9% in the 12 months prior. 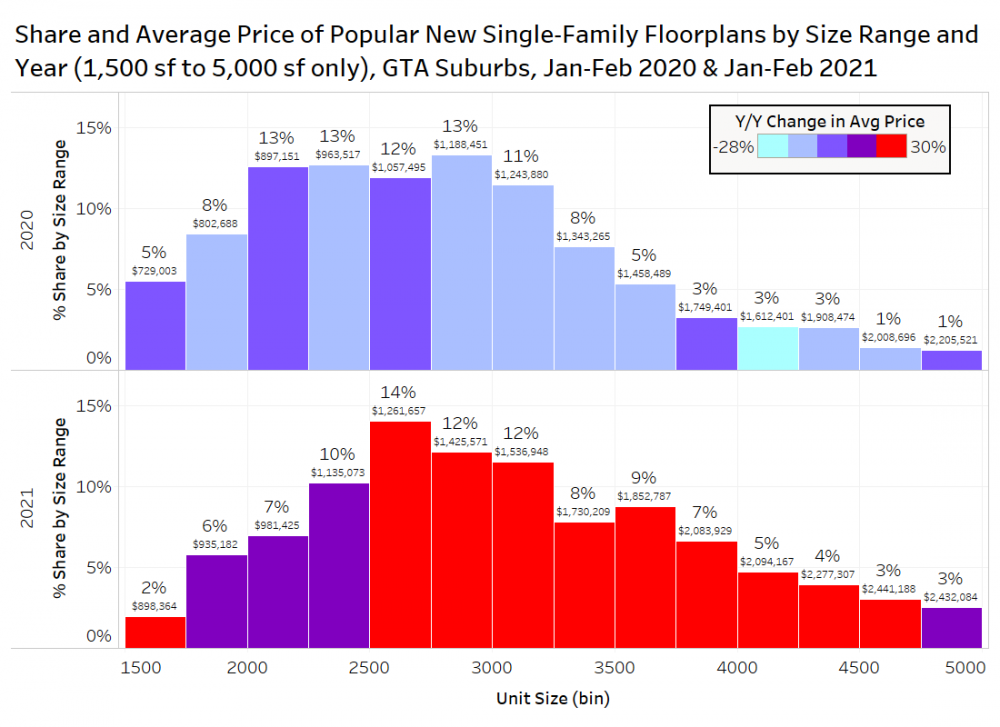 The chart above looks at the market share and average price of new single-family homes from 1,500 sf to 5,000 sf in the GTA suburbs in January 2020 and February 2020 prior to the pandemic (top panel) and January-February 2021 in the bottom panel.

The chart below looks at average pricing by rounded unit size (to the nearest hundred for 2,400 sf to 3,000 sf) for the top five GTA suburban destinations for single-family homes.

Brampton has seen the biggest growth in this size range, increasing by 28% annually, followed by Richmond Hill at 19% and Oakville at 16%.

The size of the circles reflects online pageviews on BBH, and Whitby is generating the most interest, followed by Vaughan. This is interesting given their price growth has not been as robust as the other areas. 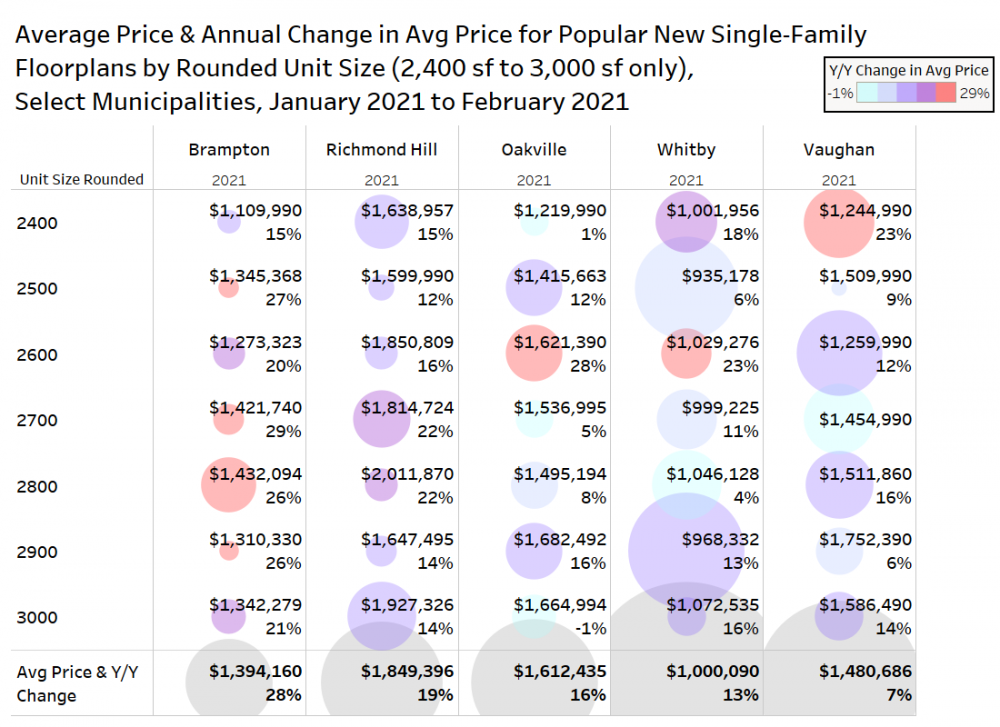 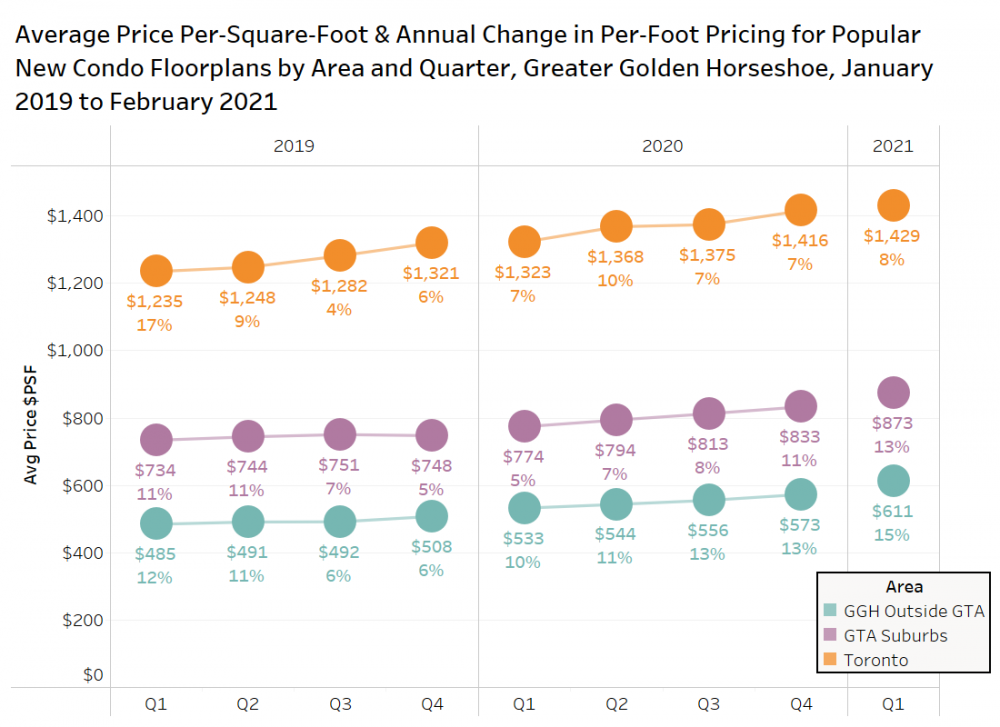 Suburban GTA Condos Prices up to $873 psf on Average

Despite the pandemic decimating the downtown Toronto rental market, with certain projects seeing annual rent declines of 25% to 30% per data from Rentals.ca, investors are still buying pre-construction and prices continue to rise. The average price in Q1-2021 (January and February only) was $1,429 psf, an increase of 8% year-over-year.

Growth has been higher in the suburbs, with Q1-2021 at $873 psf, an annual rise of 13%. Part of the rise can be attributed to the “Toronto-izing” of the burbs, with smaller downtown Toronto condo unit sizes at many of the newest launches (contact Bullpen Consulting if you need help setting the unit mix and unit sizes at your next suburban project!)

However, both the GTA suburbs and City of Toronto had lower annual price growth in comparison to the GGH outside the GTA, which has seen pricing rise 15% year-over-year to $611 psf in Q1-2021, from $533 psf a year earlier.

Despite the interest in the market outside Toronto, much of the buzz recently has been around the sell out at 8 Wellesley by Centrecourt and Bazis. Despite talk of the shine coming off the downtown Toronto condo market in the fall of last year, interest appears to be picking up, with very strong interest in Canary House Condos as well.

The chart below looks at average pricing per-square-foot for popular floorplans on Buzzbuzzhome by bedroom type at six of the most high-profile launches over the past year. Send us a note, should 88 Queen be priced higher than Canary House? Should one bedroom and two bedroom suites at Artistry be higher than 8 Wellesley? 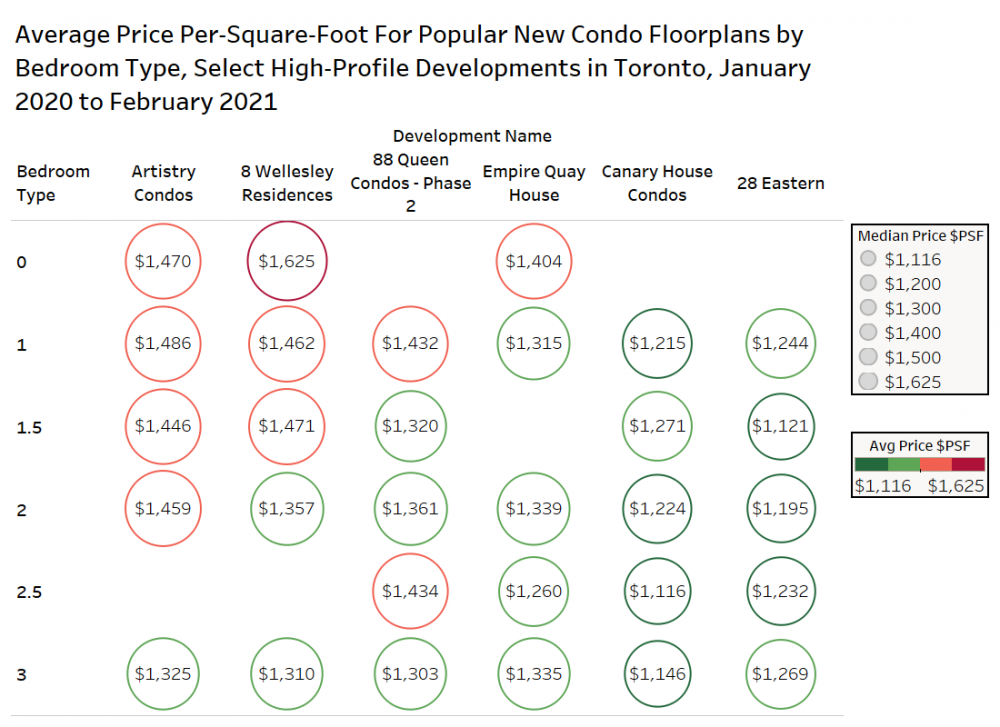 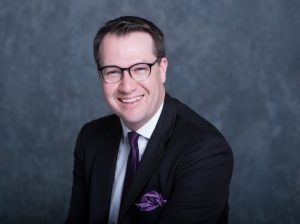 Ben Myers is president of Bullpen Research & Consulting, a boutique real estate advisory firm that works with land owners, developers, and lenders to better inform them of the current and future macroeconomic and site-specific housing market conditions that can impact their active or proposed development projects.
Follow Bullpen on Twitter at @BullpenConsult or find Ben at www.BullpenConsulting.ca.

‘It’s not all about the bottom line, all of the time’: As many struggle to make rent under COVID 19, one landlord is offering its tenants relief

Indigenous communities should dictate how $1 billion infrastructure investment is…