The recent selection of Toronto’s bid to be a host city for the 2026 FIFA World Cup has been met with great excitement as it means that our city will be taking centre stage for the world’s biggest sporting event. However, Toronto’s ability to host games in 2026 is conditional on the construction of an extension for BMO Field to increase its seating capacity for matches. Currently BMO Field can seat slightly less than 30,000 people for regular games, far below the FIFA host city minimum requirement of 45,000. BMO Field has since announced that it will be adding an additional 17,756 seats to bring its total capacity to 45,736 seats. This experience provides us with a unique opportunity to showcase our City and our Province. By constructing this extension through the use of environmentally-friendly “Mass Timber” building technology, the Carpenters’ Union believe Toronto can show the world that we are committed to being a global leader in sustainability while working toward achieving the City’s TransformTO Net Zero Strategy, while spreading the economic benefits of the World Cup to other parts of Ontario.

Mass Timber involves the utilization of timber more prevalently in major construction projects, as opposed to other non-renewable materials. Cross-Laminated Timber panels are pre-fabricated and made off site, reducing construction costs and creating a standardized process that reduces assembly time. The large-scale panels are an extremely strong and lightweight alternative to using steel or concrete to form the structure of a building. Additionally, Mass Timber building technology is more environmentally friendly than traditional building materials, such as concrete, making it the perfect material for our City to use to meet our ambitious climate goals. The concrete industry is one of the biggest emitters of greenhouse gases (“GHG”) in the world, generating the most CO2 emissions per dollar of revenue out of any other industry. In fact, up to 8% of global man-made GHG emissions are produced by the production of concrete. On the other hand, Mass Timber absorbs and stores CO2, making it the only building material in the world that is carbon-neutral. Furthermore, it is both easily recyclable and reusable. For our industry to play its part in tackling the climate crisis, switching from concrete to Mass Timber on major infrastructure projects is a “no-brainer”.

Not only is Mass Timber generally better for the environment, the Carpenters’ Union also believes it can be used to meet Toronto’s specific environmental policy goals. The TransformTO Strategy created by the City of Toronto plans to reach a target of net zero greenhouse gas emissions by 2040. Achieving net zero emissions within our set time frame will be difficult unless the construction industry takes a leading role in “green building”. If climate considerations are an afterthought for builders and developers, the continued use of concrete in large-scale infrastructure projects like BMO Field’s extension would be a huge step backwards in meeting our objectives. The Carpenters’ Union want to take the first step forward by using Mass Timber as an effective alternative building material on this project and demonstrate that the path to net zero emissions involves greater implementation of this technology on construction projects across Ontario.

Building this extension with Mass Timber will not only support Toronto and its surrounding areas, but also Northern Ontario communities that harvest and manufacture timber products. Many of these towns have had lumber mills close over the last few decades and encouraging investment in this new construction technology could help revitalize a key industry for Northern Ontario. This approach would contribute to building a symbiotic relationship between the construction industry in our cities and resource-based communities across the province to the benefit of all Ontarians.

For those outside the construction industry that are unfamiliar with Mass Timber, it may seem far-fetched to suggest that it could be used to construct stadium seating but this could not be further from the truth. The English professional soccer team, Forest Green Rovers, are in the process of constructing their new 5,000-seat stadium entirely out of Mass Timber. Dubbed “Eco Park”, their stadium plans to be the eco-friendliest in Europe and has already garnered huge amounts of praise. “Our new stadium will have the lowest carbon content of any stadium in the world”, stated Dale Vince, Chairman of Forest Green Rovers. Using Mass Timber building technology would undoubtedly work towards Toronto’s TransformTO goals. Further, there is precedent 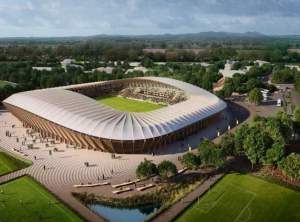 for its usage in construction of sports facilities in Canada. Grandview Heights Aquatic Centre in Surrey, BC features the longest timber catenary roof in the world. Many architects and contractors are realizing that not only is this good for the environment, but the aesthetics of the design are better for it. Paul Fast of Fast + Epp, designers of Grandview Heights Centre, notes the warmth and ambience that comes from using a sustainable building material. This feeling is evident in other stadiums that have been built in Canada with Mass Timber components, including Université Laval’s Telus Stadium and Montreal’s Saint-Michel Stadium, 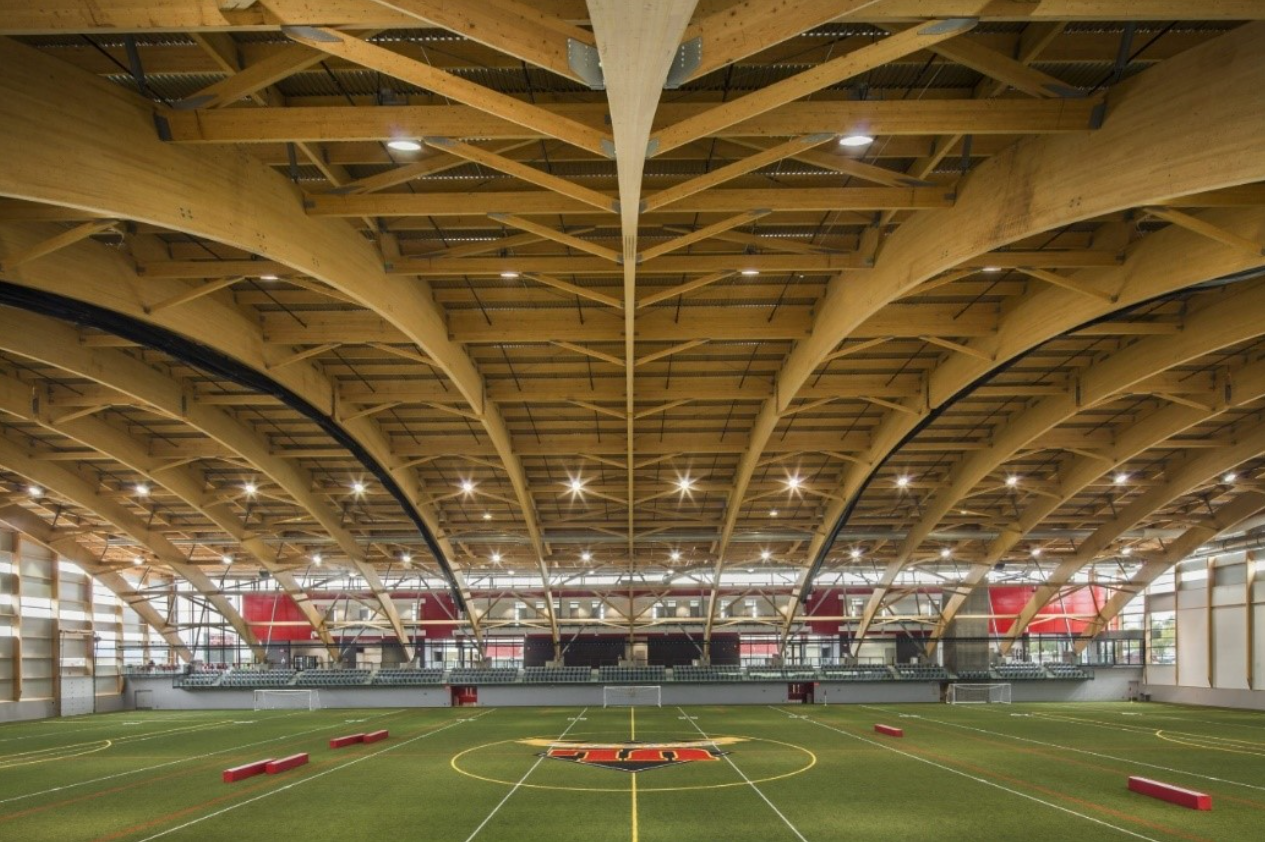 both of which are used for soccer. The awe-inspiring nature of these designs are a magnet for tourism and incorporating timber would give the BMO Field extension a uniquely Canadian feel.

The World Cup brings international recognition to the host cities but it also places them under the microscope of the global community. The construction of stadiums can be a focal point of scrutiny, as Qatar has seen with the backlash they’ve faced due to the high death toll of construction workers building their stadiums for this year’s tournament. The World Cup is an opportunity “to welcome the world and showcase all that our city has to offer”, said City of Toronto Mayor John Tory. Presenting BMO Field’s Mass Timber extension through the context of working to achieve the TransformTO Net Zero Strategy would rightly exhibit Toronto as the ambitious, sustainable, world leader that it is.

The College of Carpenters and Allied Trades (“CCAT”) is a construction skills school in which over 5,000 Carpenters’ Union members and non-union workers receive training each year. Since the CCAT established their pilot project for Mass Timber in 2019, the demand for this training course has risen greatly. The scarcity of Mass timber training in our industry is evident, as the CCAT has had employees from all across North America travel to take this course at their state-of-the-art facility. They provide the industry standard for Mass Timber training by using different full-scale modules or mockups as mediums. Instructors will teach students how to use specialized fastening systems and timber framing tools to put up prefabricated walls, ceilings and other elements that comprise mass timber structures.

With the quality of training that the CCAT provides, the Carpenters’ Union has the resources to train our Members to build BMO Field’s Mass Timber extension for World Cup 2026, while meeting the TransformTO goals, showcasing one of Canada’s great natural resources, and establishing Toronto as a sustainable city on a global scale. To say that building the extension using common building materials that create a carbon footprint is a wasted opportunity would be an understatement. A FIFA World Cup is a unique event, one that requires an innovative building solution demonstrating Toronto’s ability to be a global leader in sustainability – that solution is Mass Timber.

Multigenerational living: A strategy to cope with unaffordable housing?