Ottawa banks on LRT for its transit future.

Considered the largest infrastructure project in Ottawa, construction of the Light Rail Transit (LRT) project began in 2013 and was finally opened to the public on September 14, 2019. The Confederation Line (also called Line 1) is a 12.5-kilometre track that cuts through central Ottawa running east-west and features 13 stations/stops, running speeds of up to 80km/h; travel time for the entire route in less than 25 minutes; 17 cars with the capacity to move 21,400 people per hour; connections to more than 100 bus routes; and connection to the O-Train Trillium Line.

Major transit services such as Ottawa’s Line 1 have huge impacts on the city’s economy as well as on real estate. According to REIN’s Ottawa Transportation Effect Report, real estate prices increased roughly 39 per cent since the announcement of the Confederation Line connecting to the existing north-south Trillium Line. This is compared to Ottawa’s gain of 37 per cent from 2008 to 2017 which translates to a two per cent premium.

According to the website WalkScore.com, Ottawa is the fifth most walkable city in Canada, with the most walkable neighbourhoods being Somerset, Rideau-Vanier and Capital. Ottawa’s Walk Score is 54, while its Transit Score is 50, suggesting it is currently a car-dependent city with only some errands able to be accomplished on foot and limited public transportation options. This is gradually changing however, especially with the completion of Line 1 which has already made a positive impact on real estate prices in surrounding neighbourhoods.

In 2012, when the LRT construction was first announced, there was a spike in prices of 11 per cent based on anticipated benefits the LRT would bring. However, as is typical with transit and infrastructure announcements, they have an immediate positive impact on nearby real estate, followed by a slight decrease during the construction phase, then followed by a long-term increase in both rents and values.

The neighbourhoods surrounding the stations on Ottawa’s Line 1 were no exception. During construction — with its noise, inconvenience and air pollutants — enthusiasm dampened for living in the area and prices either dropped and/or stagnated. However values can be expected to increase roughly 10 per cent by 2021 over other areas of Ottawa without access to LRT. 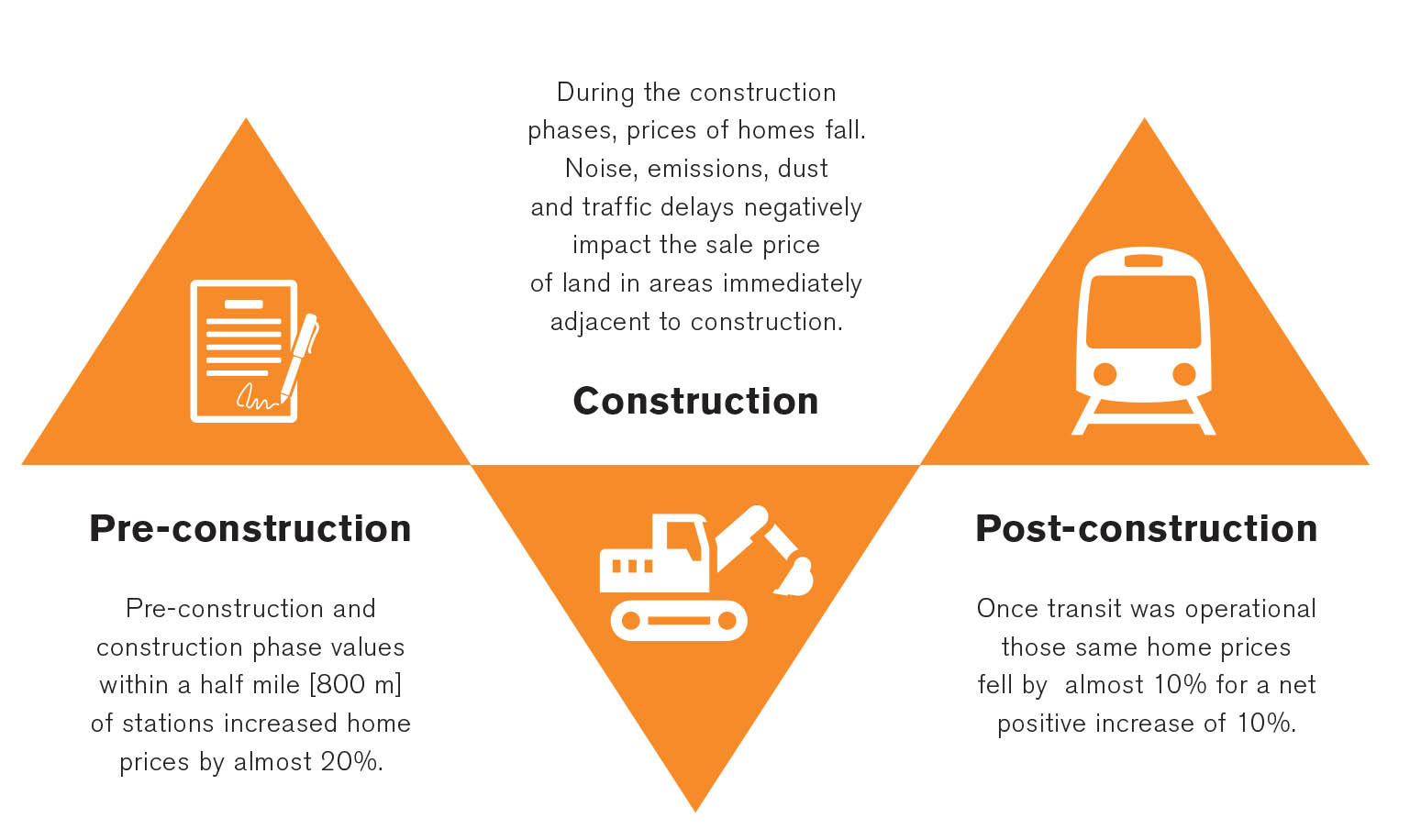 Generally speaking, all major transportation infrastructure influences property values because, as we know, increased population leads to an increase in demand for real estate, both housing (to rent and to buy) and places to work (commercial, retail and office). An increase in demand typically leads to an increase in rents and values or a buffering of rents and values in a depressed market. This works in reverse too. The removal of critical transportation infrastructure can negatively impact the abovementioned demographic and economic factors, leading to a reduction in real estate rents and values.

This formula, applied in different contexts within Canada, reveals that transportation infrastructure delivers a 10 to 20 per cent enhancement of real estate values within 800 metres of a train station or highway access. Multi-family residential units are also observed to demonstrate 27 to 99 per cent increase in values within 400 to 1,600 metres of a station or highway access. In addition, residential units near LRT stations tend to sell more quickly and at higher price points compared to units not served by transit access. Properties in these areas also fetch rent premiums of about 10 per cent for apartments, and 16 per cent for two-bedroom rental units. A 2007 meta-analysis also found that there is a 12.2 per cent premium on commercial properties within 400 metres of a commuter rail station. In the same vein, office spaces located within walking distance (about 500 metres) of a rapid transit station had lower vacancy rates by 34 per cent compared to office spaces without immediate access to a rail station. Price premiums also reached 28 per cent within a 500 metre-walking distance for office spaces.

The range of these effects varies depending on numerous factors including distance to downtown, and median income of the neighbourhood as well as other demographic and economic factors. 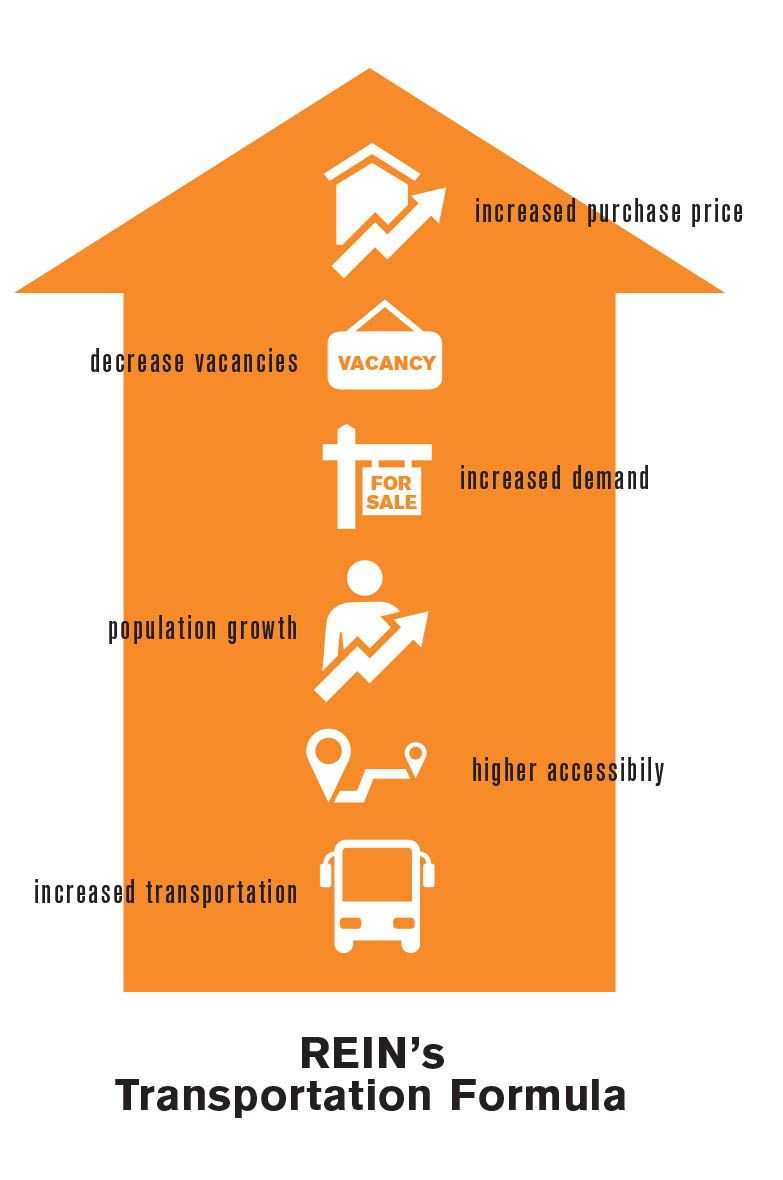 Access to a public transport system is integral in the economic life of any city. Key to understanding how public transport systems work in the context of Ottawa is the compensation principle. The compensation principle suggests “reduced transportation costs allow households to spend more on housing and, in turn, bid up the rents or prices of homes located in areas with low commuting costs; this is precisely what creates the land value/density gradient.” In other words, people living near transit save about $1,250 per year on transportation and often re-allocate those dollars to housing costs in order to gain from the benefits of ease of access and proximity, making real estate nearest transit often more expensive, either to purchase or rent.

Ottawa’s Centretown neighbourhood, within which sits Carling Station and often described as offering the best public transportation options in the city, demonstrated a five to 11 per cent increase in property values compared to other Ottawa neighbourhoods without LRT access. By comparison, in 2002 Hampton Park to the west of Carling Station increased in value by 10.4 per cent, while West Centretown increased by 21.5 per cent, showing that a neighbourhood with access to LRT increased by 11.1 per cent over a non-LRT neighbourhood. Even in 2008, Hampton Park increased in value by 6.4 per cent and West Centretown by 11.3 per cent, which is an additional increase of 4.9 per cent even during a year when real estate values struggled.

The City of Ottawa has three key plans that together guide the city’s growth through 2031 and include the Transportation Master Plan; the City’s Official Plan; and a Transit-Oriented Development Plan. A Transportation Master Plan was first created in 2008 and updated in November 2013 with reportedly minor changes. The guiding principles of the document include reducing automobile dependence, providing an integrated system of multi-modal options for transportation, integrating transportation with land use, protecting public health and safety, protecting the environment, and enhancing the economy.

At the core of Ottawa’s Transportation Master Plan is the conclusion of the Confederation Line which the city believes will assist the economy in becoming more competitive and dynamic. The City of Ottawa reported that “the Confederation Line [will be]…a catalyst for the development of more populated mixed-use communities that require less infrastructure per capita, reduce demand for road traffic and encourage walking, cycling and transit.” The city believes it is critical for the urban environment to densify in order to enable an efficient and cost-effective transit service.

Based on the city’s Official Plan, which provides a policy framework to guide the city’s physical development and vision for growth, Ottawa is moving towards developing transportation infrastructure that features high-frequency service, respect for the environment, and hubs that promote business growth and essential services to enable densification. The 2013 updates included the construction of new cycling paths and pedestrian walkways, plus direction on developments that are located within 600 metres of a rapid transit station.

According to REIN’s research, transport infrastructure projects could be categorized into four tiers according to the status of the project: under construction; funded; approved by city council; and in the planning stage with no committed funds. Depending on the tier, impacts on real estate also vary. As Ottawa continues to increase in size, the city along with the government at all levels is continuously working to upgrade infrastructure to accommodate these changes. 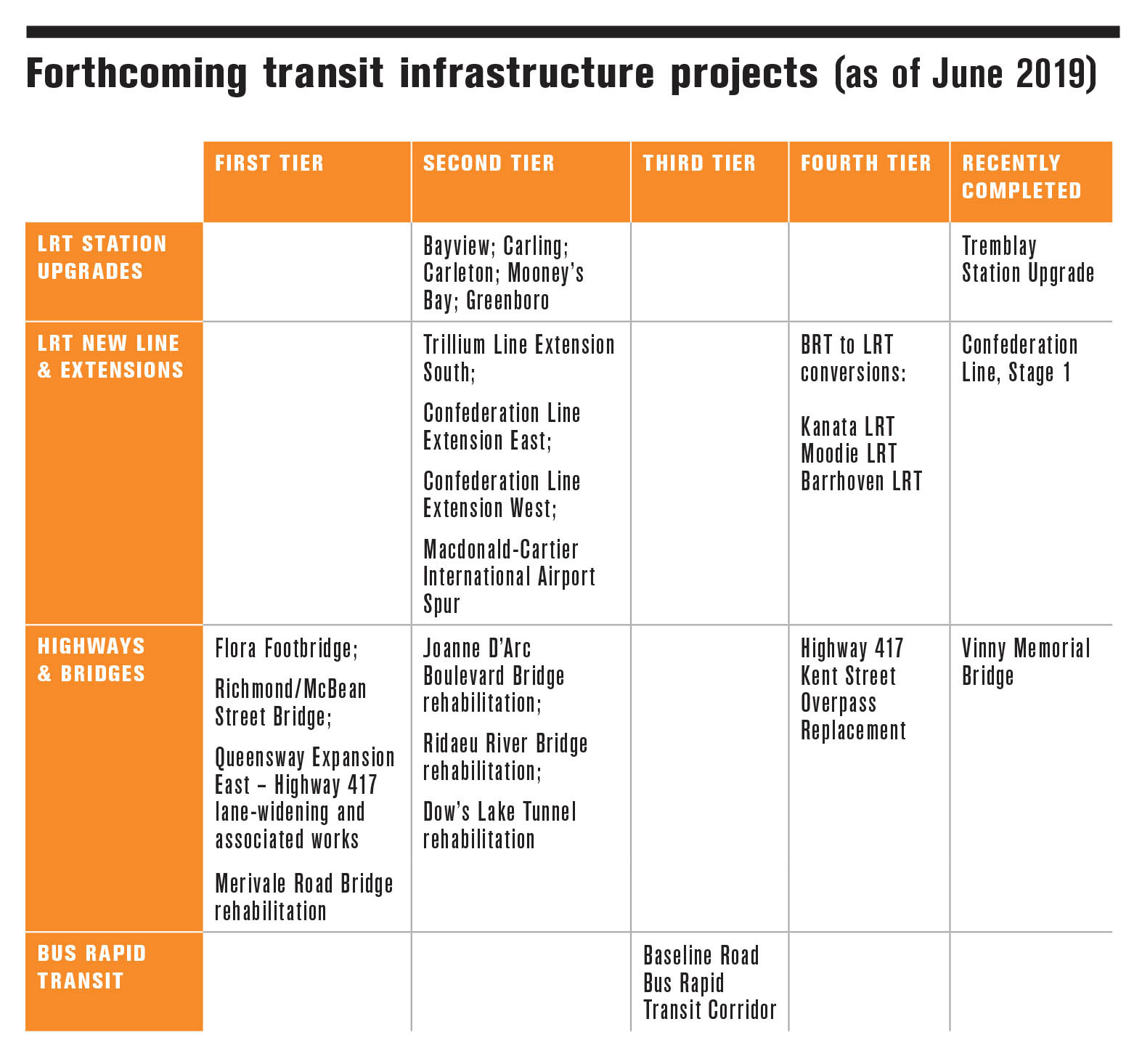 In its long-term plans, the city is focusing on quality-of-life for its residents, to make commuting by public transit seamless, to have green spaces and pedestrian walkways for active transportation, and to build infrastructure responsibly in terms of tax dollars. As noted in the city’s transport plans, the latest focus of urban planning is densification around transit areas.

Although Ottawa does not appear to have mandated specific numbers for densification, urban planning projects do have a focus on multi-family development co-located with transit. In the past few years, Ottawa has made significant developments in constructing sustainable transportation infrastructure such as pedestrian and cycling pathways and bridges that transit major roadways. These projects appear to have been completed.

For real estate investors, opportunities align with the newly-built LRT and other existing Tier One transport projects. As other planned and funded projects come to fruition, land values in nearby neighbourhoods are bound to increase. As for the Confederation Line, the progress of repairs and improvements will need to be monitored and decisions to acquire property made at the right time. Whether plans for expansion and future construction of transport infrastructure continue, one thing is certain: Ottawa’s transit future is dependent on the success of the Confederation Line, which will have a significant ripple effect on the city’s real estate economy for years to come.