Basic economics teaches us that when there’s demand for a product or service, supply will follow. So why hasn’t that been the case with rental housing in Ontario? Rental demand in Ontario has continued to expand at its fastest rate in more than 40 years. This growth in demand is a mark of success. Over the years, Ontario has attracted millions of net new immigrants fueled by economic strength, an embrace of diversity and the need to supplement our home-grown workforce.

More and more residents are attracted by a vibrant urban lifestyle and want to live downtown, but that desire runs smack up against the lack of new rental supply. Demand is high, and it’s driven up the price of home ownership, making rental housing an even more essential option. Yet Ontario has a supply deficit of 70,000 to 100,000 units over the next decade. Purpose-built vacancy rates in Ontario currently remain below two per cent for the second consecutive year, which hasn’t occurred since 2000-2001. The City of Toronto’s vacancy rate was even lower at just 1.1 per cent last year.

It could not be clearer: we need more rental apartments, especially in Toronto and the GTHA. So why has supply not kept up. Two words: “policy failure.”

Skeptics say that government policy is just an excuse and that developers don’t want to build rental housing. Facts tell a different story. Last fall, the Ford government created an exemption from rent control for new units occupied after November 15, 2018, reversing a change by the previous administration. The impact was immediate and dramatic. According to a new Urbanation report, the number of purpose-built rental apartments that opened their doors to tenants in the GTA reached a 25-year high of 1,849 units in the first quarter of 2019. That is almost five times the number of new units added per quarter in recent years. Developers had taken the Tories at their word, anticipated the change and invested again in rental housing to meet the burgeoning demand. 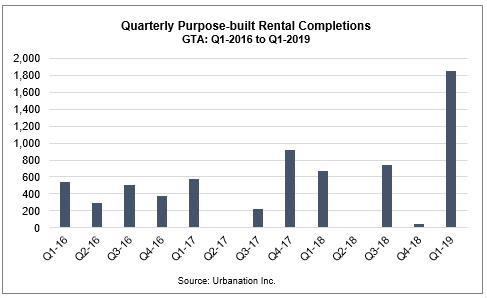 The report also finds that the pipeline for new supply is ballooning, with applications filed for almost 43,000 new units of purpose-built rental housing, nearly 50 per cent higher than just two years ago. Yes, policy can make a difference. That’s why the rental industry wants to work with governments, at all levels, to encourage new supply so that everyone who wants to rent will have that choice. As rental-housing providers, we believe there is much that can be done on a number of fronts:

Land costs — Land represents approximately one quarter of the cost of a typical rental housing project in Toronto. It’s a significant barrier to development. Government policy must maximize the use of privately-held lands that have a low-cost base. Properties with existing rental buildings that have room for additional towers, referred to as “unicorn sites,” represent untapped potential to put new units on the market without any cost to buy new land. These “unicorn sites” need to be treated like a strategic asset and optimized. Government should also consider innovative ways to dedicate surplus lands for rental housing projects.

Faster building approvals — It can take years, even a decade, to shepherd a project through all the needed municipal and local approvals. Time costs money, which goes into the rents charged. There must be a faster way. Premier Ford has promised to cut the development approval times to a maximum of one year. It’s an ambitious goal, but one worth striving for.

Improving the operating climate for rental housing — The current stock of rental housing in Ontario is relatively old. Over 80 per cent of units were built before 1980 and only seven per cent have been built since 2000. Vacancy decontrol is the mechanism that allows for rental providers to raise rent to market level after a tenant leaves, and is how rental providers ensured a revenue stream to address the cost of major capital expenditures. As the supply gap is increasing, turnover has gone down dramatically. This coupled with rising pressure from organized groups fighting legal above guideline rent increases has made the climate for operating rental housing very challenging.

We need a balanced rent control system to allow for capital investment, since the annual rent increase guideline (set at CPI) is explicitly not designed to cover the costs of major renovations. Under the present structure, the landlord makes improvements in the building, and then applies for a rent increase (capped at three per cent for three years) to recover part of the cost. The process creates uncertainty for both the landlord and the tenant, neither of whom knows if the AGI will be granted or not. More adjudicators and a properly resourced Landlord & Tenant Board to clear the backlog of applications would benefit landlords and tenants and provide greater certainty.

On May 2nd, the Minister of Municipal Affairs and Housing, the Hon. Steve Clark, released More Homes, More Choice: Ontario’s Housing Supply Action Plan, and proposes major policy changes that would streamline the development approval process to remove unnecessary duplication and barriers, make costs and timelines more predictable, and simplify the process for getting new purpose-built rental units to market. The proposed changes to the Development Charges Act will freeze the development charges rates at the time of the application to provide more certainty for developers. For rental housing projects, the government is also deferring the payment of development charges until occupancy and payable over five years. Smaller landlords who choose to add a secondary suite will also benefit as they will soon be exempt from development charges altogether.

More Homes, More Choice proposes other important policy changes as well. The government is moving to change back the rules so that the Local Planning Appeal Tribunal can make decisions based on the best planning outcomes and is able to hear fresh evidence to inform its rulings. The legislation has given the Minister of Municipal Affairs and Housing the authority to require a local municipality to adopt a mandatory development permit system to streamline planning approvals to 45 days in prescribed areas.

The government has also introduced a framework to make community benefit related costs more predictable by introducing a community benefits charge will be capped as a percentage of the land value keeping municipalities “whole” while providing greater certainty and getting away from a culture of councillors playing “let’s make a deal” on planning matters. Removing barriers to supply and easing operating challenges won’t be easy. But the alternative – ever-tightening rental markets and far too many people without real housing choices – is not an option.

The Ontario government deserves credit for taking dramatic steps in the right direction. With these kinds of changes, the conditions to create more purpose-built rental housing are starting to come within reach. Although more is needed to meet demand, there is hope that sanity is being restored to the rental market. The rental housing industry is ready, willing and able to work with all governments to get us the rest of the way.

Tony Irwin is president and CEO of the Federation of Rental-housing Providers of Ontario.

Who Are We Really Building This For?

Cities need to innovate to improve transportation and reduce emissions