Blow-down of partially-constructed houses and other light-frame wood buildings occurs numerous times every year across Canada. In many instances, the gusts causing such failures do not exceed the design wind speed that the completed house is required to withstand. For instance, an event in 2018 in Niagara Falls, ON caused failure of several houses under construction. Nearby instrumentation measured wind gusts of up to 100 km/h; the National Building Code of Canada (NBCC) specifies a design (3-second gust) wind speed for the Niagara Falls region of 141 km/h. Several design features, particularly of modern houses, increase susceptibility to collapse during a particular stage in construction. There are a number of steps that homebuilders can take to help prevent loss of their homes during the vulnerable stages.

In most failures observed in partially built houses, the first-storey walls collapse entirely, with the roof and upper storeys landing nearly intact on top of the pile. These houses are at a stage in construction before interior drywall or first-storey windows have been installed. In a completed house, the NBCC allows for required lateral strength to be provided by gypsum drywall. However, since interior finish is installed so late in the construction process, there is often at least a week of time where the house has minimal lateral strength. Since the NBCC applies to the finished building, there is no clear requirement for lateral bracing during the phases of construction. This guide summarizes the causes of blow-down of partially built homes and provides recommendations for measures that can improve their lateral strength.

Causes of Collapse During Construction

In many modern subdivisions, house floor plans are relatively narrow, with the front and back end walls much shorter than the sidewalls that extend into the lot. The end walls also contain large windows, garage door openings, and front and back door openings, while side walls have minimal openings due to proximity to neighbouring houses. 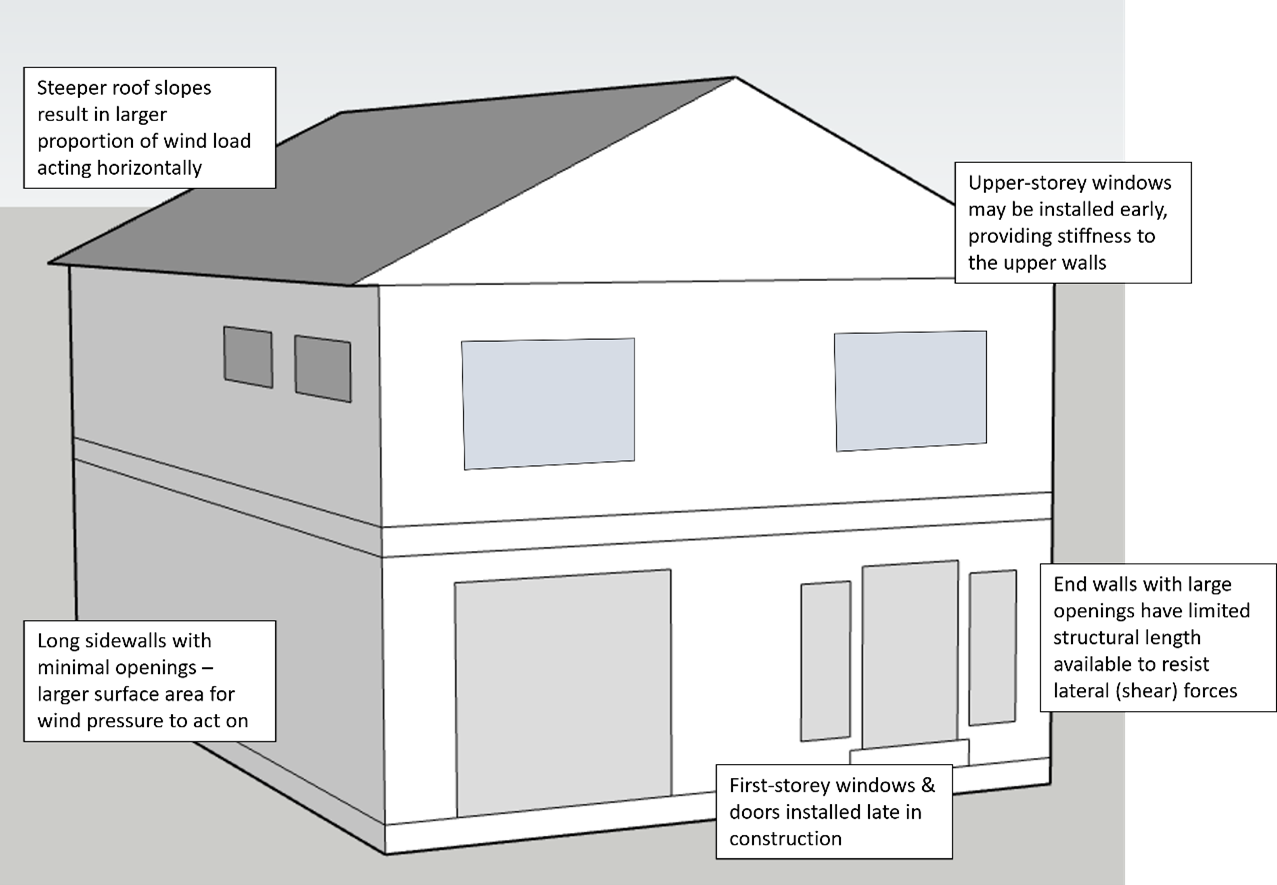 During construction, if wood sheathing is not applied, the racking strength of the end walls is provided only by the wall studs, top and bottom plates, framing around openings, and the end-nailed connections between them. A house at this stage in construction stands up to gravity loads due to the strength of the wall studs under compression. However, if a wind gust occurs that is strong enough to make the walls start to lean, it takes relatively little force to cause rotation at the nailed connections. If the studs lean out of plumb (top of stud is no longer in alignment with bottom), the weight of the structure above contributes further to the collapse. When such failures occur, the house at the end of a row will typically collapse first due to wind hitting its exposed side wall, and then it may fall onto neighbouring houses causing a domino effect.

When it comes to protecting houses from blow-down during construction, the critical form of mitigation is to brace the walls, particularly on the first storey where there are large openings. The first recommended option is to sheathe the walls with structural wood sheathing in place of continuous rigid insulation. This is a permanent method for providing better lateral strength for the lifespan of the building. However, this method requires alterations to the design of the house and may interfere with the insulation performance. Where use of permanent structural wood sheathing is not desired, a number of temporary measures can be taken to provide early shear strength to the walls.

End walls, interior walls, and side walls can be braced using temporary wood members running in the direction of likely collapse (along the narrow dimension of the house).

Side walls can be propped up in the out-of-plane direction using diagonal braces (30° to 50° angle) nailed to a cleat that is fastened to the floor inside the house. The top of the brace should be fastened to the face of a stud near the top plate using at least 2 nails each, and the bottom should be similarly nailed to the cleat. These out-of-plane braces should be installed every 2-3 m. Avoid simply toe-nailing the brace at either end, especially at the subfloor. 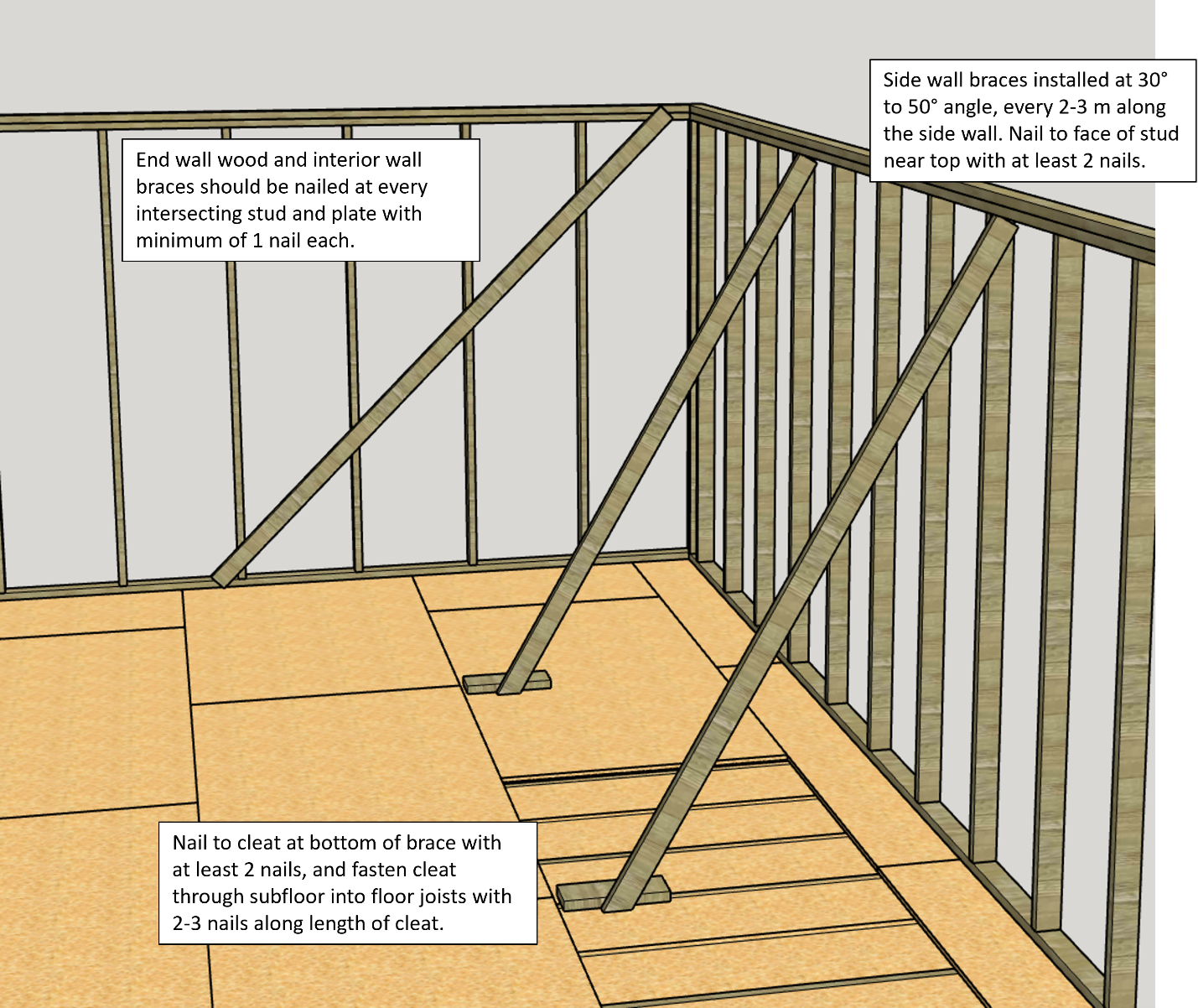 End walls and interior walls in the narrow direction can be braced using diagonal braces (45° angle) fastened to the studs and the top and bottom plates, using at least one nail per intersecting member. Such braces might cover part of window or door openings.

The goal of this guide is to provide methods for adding extra lateral strength to a house, particularly to the first-storey walls before the windows, doors, and interior drywall is installed. In addition to temporary wood braces, other methods may include temporary metal braces such as flat tension straps.

While using either wood or metal diagonal braces, it is important to ensure they diagonal braces are installed in both directions along each face to prevent the house from leaning or rocking in either direction.

Another method to improve early wall stiffness – and prevent worsening of wind loads due to internal pressurization – is early installation of first-storey windows. Many builders leave large openings in the end walls on the ground level to facilitate movement of materials in and out of the house. If it is not convenient to install windows early, temporarily sheathing over window and door openings when the site is to be left unattended for an extended period (overnight or over the weekend) may be practical. Sheathe over as many window and door openings as possible, especially on end walls, using structural wood sheathing and a nail spacing of at least 150 mm around the perimeter of the opening. 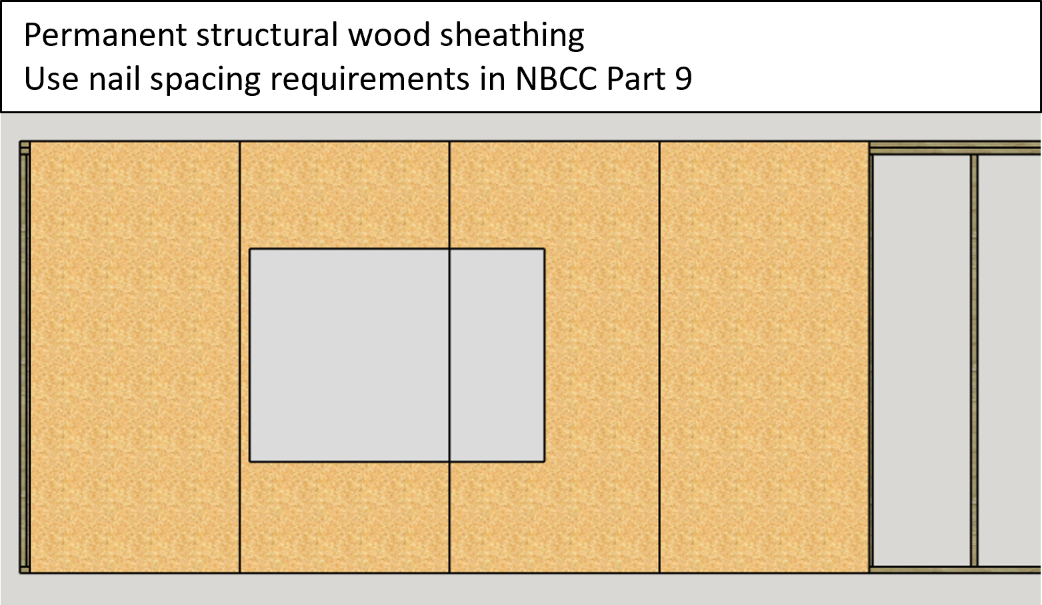 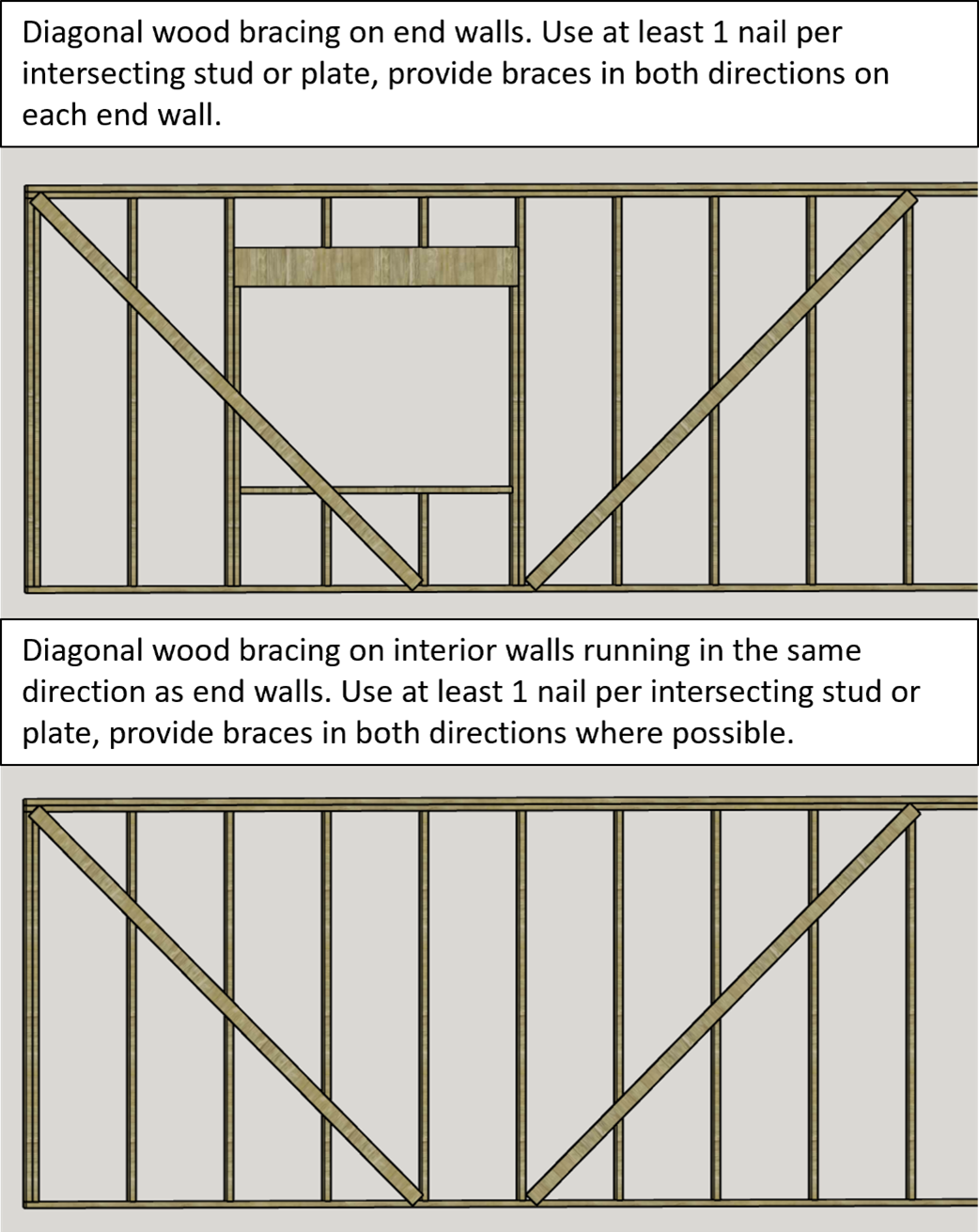 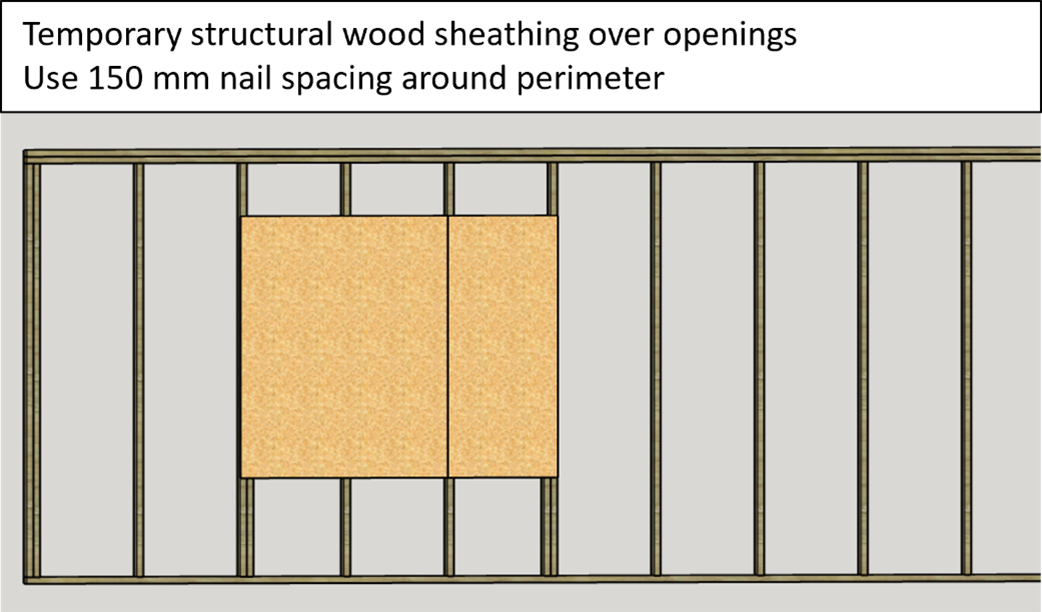 This report is a reprint from the Institute for Catastrophic Loss Reduction (ICLR) ‘MIND your business’ – ICLR Commercial Bulletin (Issue 8, August 2022):