Real sustainability must start with the house and the home

I was a carpenter and contractor for decades during and in between university. In 2008 an old injury flared up, forcing me to start looking for something else to do. I had some pressing questions about how we build and use our homes, so I applied to Carleton University. I was on a roof when the Chair of the Department of Geography and Environmental Studies phoned to say I had been accepted into their PhD program, and I thought “It’s gotta be easier than this.” It was a jarring jump from that roof to academia, but four years later I graduated with a doctorate. My dissertation was about houses, homes and sustainability.

I’m concerned about homes and ecology: how our homes fit, or don’t fit, into the local and global environment. For the academic in me, sustainability is about both reducing environmental harm and adapting to the growing impacts of climate change. I do not consider the words “house” and “home” to be interchangeable. When people move in, space and place take on new significance. In theory, home is much more than a physical structure: it is a domestic place of privacy and enculturation. It’s where we learn how to communicate and interact with our world, where we learn or don’t learn to respect our neighbours including our non-human ones. Further, the construction of a house is just the start of a long sequence of a home’s environmental impacts. For example, people open and close windows and set thermostats, take long baths or short showers, mow large lawns with gas mowers or small lawns with electric mowers. People choose detached houses in dispersed suburbs or townhouses or condos in denser developments. They drive to work, the store and soccer practice in a big SUV, or they bus, bike and walk. Energy consumption is just one function within the ecology of a home. I think builders who claim to build “homes” — including the ones claiming to “build sustainably” — are misleading us because these are social processes that start after the builders are gone. I think the distinction is critical especially as we plan to respond to climate disruptions. 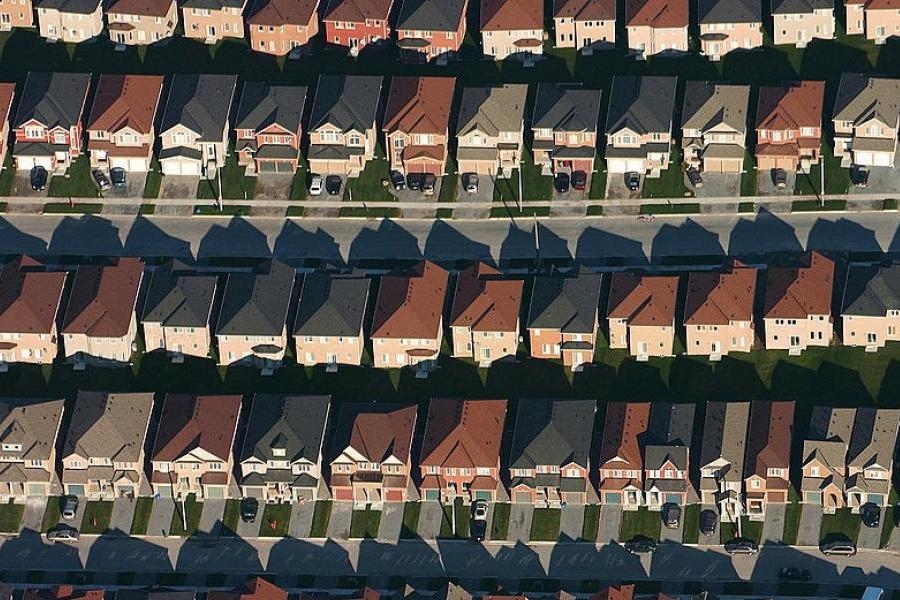 Developers are easy targets for criticism. They’re often prominent, conservative businesspeople in a hyper-competitive industry, influential in city halls, and undoubtedly there are industry players who put profit before people and planet. The reputation for aggressive self-interest is at least partly earned. But we consumers are still buying detached houses in low-density suburbs. I’ve also heard repeatedly from progressive and frustrated developers in my circle that when consumers are offered environmentally responsible construction options like upgraded windows, insulation or a heat pump, they invariably choose granite countertops, even when the energy-saving upgrades have a clear long-term payback for the consumer. One developer told me his sales staff don’t talk about ‘green building’ now because consumers just roll their eyes and say “Yup. Everything’s green these days. I have green cat litter and green toilet paper.” I fear that consumers are weary of the near-constant narratives about sustainability. If an upgrade that we don’t really understand doesn’t pay for itself within a few years, we’ll choose the cosmetic. No sense passing that benefit along to the next owner, right? We’re all tired of trying to figure out how to be responsible, especially during this pandemic. The conversation is even more fraught when I try to bring up risk and adaptation to climate disruptions.

There is no doubt that risks are growing from a global environment that seems to be rebelling against our misbehaviors. I think insurers and governments understand why humans contribute to and ignore risk, but they haven’t figured out how to get us to act. Human behaviour is complicated and often seen as the purview of social scientists and social psychologists – and geographers like me, apparently. Margaret Heffernan calls our propensity to be unprepared for catastrophes “willful blindness” in her book by the same name. Robert Meyer and Howard Kunreuther call it the Ostrich Paradox. For various interrelated reasons that include short-term thinking, unjustified optimism, amnesia, fear, resistance to change, tendency towards social conformity and postponing the costs of action, humans ignore or deny risk and jeopardize our own security in our own homes.

Are there remedies? Can we foster responsible behaviour and investment in the future while protecting our homes from the environmental changes we’ve already wrought? Certainly, there’s a role for regulations that dictate how we build our houses and neighborhoods. But housing and building regulations are unpopular with builders who claim with some justification that regulations add to (initial) costs, and with politicians because it’s tough to make decisions about the future of our species that go against the local short-term interests of consumers and the housing industry. This intractable problem — making change and surviving the next election — has dogged elected officials for decades. In addition to courageous regulators acting with the bigger picture in mind, builders and others in the private sector need to step up and accept responsibility beyond the three to six months that they usually plan. If you call yourself a “city builder” and you are not thinking about the next generation, your legacy is at risk, like the developments you build, from the growing and increasingly dramatic consequences of climate disruptions. And if one developer acts on climate change s/he may ironically lose competitive advantage against the ostriches. The private sector must come to terms with the ecology of risk and act in concert to mitigate that risk. Take the lead from big investors, the insurance industry and federal regulators who are steering the conversation about risk and responsibility away from the commons to specific risky behaviours (like funding high-carbon enterprises and building in potential flood zones). Clear benefits will be a level playing field and predictability in a regulatory realm that, despite resistance from some players, is lurching into the future.

That is how I see the role of regulators and producers in our efforts to make housing more sustainable. Now what about the consumer and that granite countertop? Here are some hints. Right now, energy is too cheap and doesn’t reflect the full costs of that energy to the environment and to our communities. I’m all for increasing carbon taxes: it bypasses the political/regulatory/electoral boondoggle and rewards those who are aware and responsible over the ostriches. Attach an appropriate cost to that granite. I also favour very public (but temporary) incentives to both producers and consumers of housing. Make it smart and sexy to be environmentally savvy, like we did with recycling. I think it will stick. But I don’t know of a way in today’s housing market to compel consumers to opt for efficiency and resilience over cosmetic upgrades. I don’t know if there is a remedy for fashion and frivolity. Except to pull our collective heads out of the sand so we can protect the future. So go ahead. Take the leap. Splurge on that heat pump. It will pay back, create jobs, but more importantly, your kids will think you’re smart and maybe even brag about you to the ostriches next door.

Gary Martin teaches sustainable business in the Sprott School of Business at Carleton University in Ottawa and consults with homeowners and builders on housing, homes and sustainability.

The Power of Our Urban Constellation