What planners and designers should think about when incorporating security measures into the built environment.

As Peel Region landscape architect Wayne Nishihama tuned in to the news about the devastating van attack in North York last spring, when a troubled 25-year-old man killed 10 and injured 16 pedestrians with a rented cube truck, he quickly zeroed in on a puzzling urban design detail about the setting for the tragedy.

The suspect, Alek Minassian, allegedly drove the vehicle along an extended stretch of wide sidewalk. “[It] was like another lane,” observes Nishihama, who worked for years as head of urban design for the City of Mississauga and is an expert in crime prevention through environmental design (CPTED). “How could the driver mount the curb and drive for such a long time?”

Based on his municipal experience, he surmised that the sidewalk’s breadth was to allow access for snowplows and other maintenance vehicles. What’s more, in a dense area lined by high rises, shops, restaurants and offices, that kind of public space is both well-used and well-loved: the stretch of Yonge Street where the attack occurred attracts thousands of pedestrians, whose presence has created a lively, cosmopolitan ambience.

Yet that invitingly open ribbon of concrete provided, unwittingly and tragically, the physical conditions necessary for the kind of weaponized vehicle attack that has become an increasingly common tool of terrorists and others bent on inflicting mass violence in urban settings. The attacker, as Nishihama points out, “was able to use [the sidewalk] as a road.”

In the immediate aftermath, City of Toronto officials hustled to surround some crowded public spaces, like Union Station’s plaza, with Jersey barriers. A few weeks later, during the city’s giant LGBTQ Pride parade, the city also parked large garbage trucks at strategic intersections leading to the route, effectively using them as temporary roadblocks to deter copycat perpetrators who might want to wreak havoc at a mass event taking place in a public space.

In a fretful era characterized by a drumbeat of terrorist attacks and horrific mass crimes perpetrated in public or quasi-public areas, the question of how civic officials, law enforcement agencies and property owners create secure space is certainly a top of mind concern. Some cities, in recent years, have responded aggressively, setting up formidable cordons featuring security booths, concrete barriers and military grade obstacles around highly sensitive areas, such as Wall Street, in New York City. Many others have deployed a somewhat less robust mish-mash of bollards around buildings or ringing public areas considered vulnerable.

But Tom McKay, a retired Peel Region police officer who teaches CPTED certification programs, stresses that a motivated criminal or terrorist can almost always find a way to carry out an attack, despite substantial investments in security (the World Trade Center spent $50 million on security in the wake of the first 1993 attack). And, as he adds, “hardened” security perimeters around buildings, infrastructure, or public spaces, are not only expensive; they create a sense of risk that serves to alienate members of the public. In some obvious cases (e.g., power plants), these cordons are essential. But decisions about how much security is enough, and what form it can take, remain elusive.

Throughout the post-war period, the subject of public space security has evolved dramatically in ways that reflect both geo-political or sectarian conflict as well as evolving trends in urban living.

In many cities, especially in the U.S., factors like white flight, racial tension and the outward pull of suburban sprawl left a legacy of semi-abandoned streets and zones, especially around large-scale public housing projects, marked by both extreme poverty and high levels of crime. Academics, planners and politicians espoused all sorts of remedies, from proposals to create gated streets in low-income areas (as in St. Louis) to the “broken windows” school of crime prevention. In cities that embraced this philosophy, first advanced by sociologists James Q. Wilson and George Kelling, public authorities sought to eliminate the visible traces of abandonment (e.g., graffiti or the eponymous broken windows) on the assumption that evidence of neglect gives rise to criminality while repelling pedestrian life.

Meanwhile, in parts of Europe, during the waves of political terrorism that occurred between the 1960s and 1980s, University of Toronto landscape architect Robert Wrights points out that public agencies adopted a range of defensive measures, from the removal of municipal garbage bins (often used by groups like the IRA or the Red Brigade to plant dirty bombs) to the installation of retractable spikes embedded in roadways at key locations and the wide-spread use of security cameras in public spaces.

After the 9/11 terrorist attacks on the World Trade Center and subsequent assaults in cities like London, government agencies were prompted to step up hard security cordons around critical infrastructure, government buildings as well as some public spaces. Today, it’s not unusual to encounter examples of this kind of highly visible security, for example the border of concrete bollards and closed streets that surround the American Embassy in Ottawa, which opened in 1999. But as University of Colorado planning professor Jeremy Nemeth pointed out in a 2010 study on public space and security in big cities like New York and San Francisco, “physical security has shifted from an overt militarized landscape of decades past to a more camouflaged landscape currently prevalent in cities.”

With respect to weaponized vehicles in particular, Wright points out that public space designers have deployed a wide range of objects and landscaping techniques that can serve as impediments to a fast moving or heavy vehicle. These include fountains, heavy planters, works of public art, retaining walls, reinforced structures like bus shelters, and more playful versions of the familiar bollard.

McKay says that such fixtures, if arrayed at the edge of a sidewalk or a plaza, won’t necessarily stop a vehicle from mounting the curb, but they may force the driver to come at it from an oblique angle, thus reducing the force of impact. He adds that elements like large planters will play a double roll, not just forcing vehicles to slow down but providing “safe havens” that allow pedestrians to take cover if necessary.

Wright also points to the importance of using softscaping to break up hard, paved surfaces. Grass or gardens will serve to slow vehicles, as will undulating topography. As he observes, much defensive street furniture extends up and out of the pavement, but it’s also important to “go down,” adding changes in elevation or steps in public spaces as a means of impeding the progress of weaponized vehicles.

“The design of the barriers is incredibly important,” observes Cara Che, a public space researcher who publishes a blog called Defensive Toronto, noting that large and imposing objects increase the perception of risk. “Obstacles should be blended into the design and not look like a deterrent,” adds Nishihama.

Beyond the assortment of such discrete elements, the broader urban planning of public space also plays a crucial role in such security calculations. “The trend is, don’t just look at the site,” says Nishihama. “Look at the surrounding areas.” A 2017 Australian planning study, entitled Hostile Vehicle Guidelines for Crowded Places, points out that the measures adopted should be proportionate to the risk and context-specific, but urges municipal officials to always ensure that hostile vehicles can’t have unimpeded access to “hot spots,” such as open markets, parades or festivals.

Increasingly, observe both Wright and Che, debates about public space planning and hostile vehicles has come to include the risks facing pedestrians and cyclists posed by careless or distracted drivers, not just terrorists or troubled individuals determined to foment mayhem. “We’re much more fearful of the use of cars for terrorism than the random killing of people on sidewalks.”

Many of these security and safety ideas have been gathered up and advanced by practitioners of CPTED, an approach first promoted in the 1970s by architect Oscar Newman and criminologist Tim Crowe. Those who advise cities on applying CPTED principles in their urban design plans say the best approach is to incorporate these techniques during the initial design and construction of public spaces. Quoting Crowe, McKay says, “90 per cent of what you should do to prevent terrorism you should be doing anyway.”

Retrofitting public spaces after an attack, or in a period when more attacks are highly anticipated, is a far more fraught process, and one that requires planners and local decision-makers to balance assessments of potential risk against the downside of creating an over-securitized and therefore alienating public environment that discourages the serendipity and natural flows of city living.

Some observers worry that in the present environment, anxious politicians and local governments will yield to public fear and tip the balance in favour of excessive security. Indeed, in his 2010 study, the University of Colorado’s Jeremy Nemeth found that as more agencies and stakeholders become involved in making decisions about boosting security in public spaces, the more hardened those perimeters become.

Others point to examples of so-called “pretext securitization,” and a worrisome tendency by some large commercial or institutional property owners to deploy highly visible defense perimeters as a way of signaling a building’s “prestige.” “In my Boston field research,” observed Susan Silberberg, a lecturer in urban design and planning at MIT, in a 2014 essay, “public officials and building owners boasted of being a ‘top-ten target,’ a kind of security machismo that promotes bigger and better security upgrades wherever possible.”

Asked how he would advise local planners and politicians in a Canadian context, Tom McKay says he counsels governments to adopt the easiest and most straightforward measures first before installing costly and visually assertive approaches. He likens the decision-making to pollution reduction strategies: go after the low-hanging fruit, but remember that it’s almost impossible to achieve a 100 per cent clean-up. It’s the same with ensuring safety in public spaces.

Governments should pursue common sense measures that mitigate risk, but be realistic about the limits of what they can achieve. “There’s no magic bullet with CPTED [techniques],” McKay says. “If someone really wants to get in, they’ll get in.” 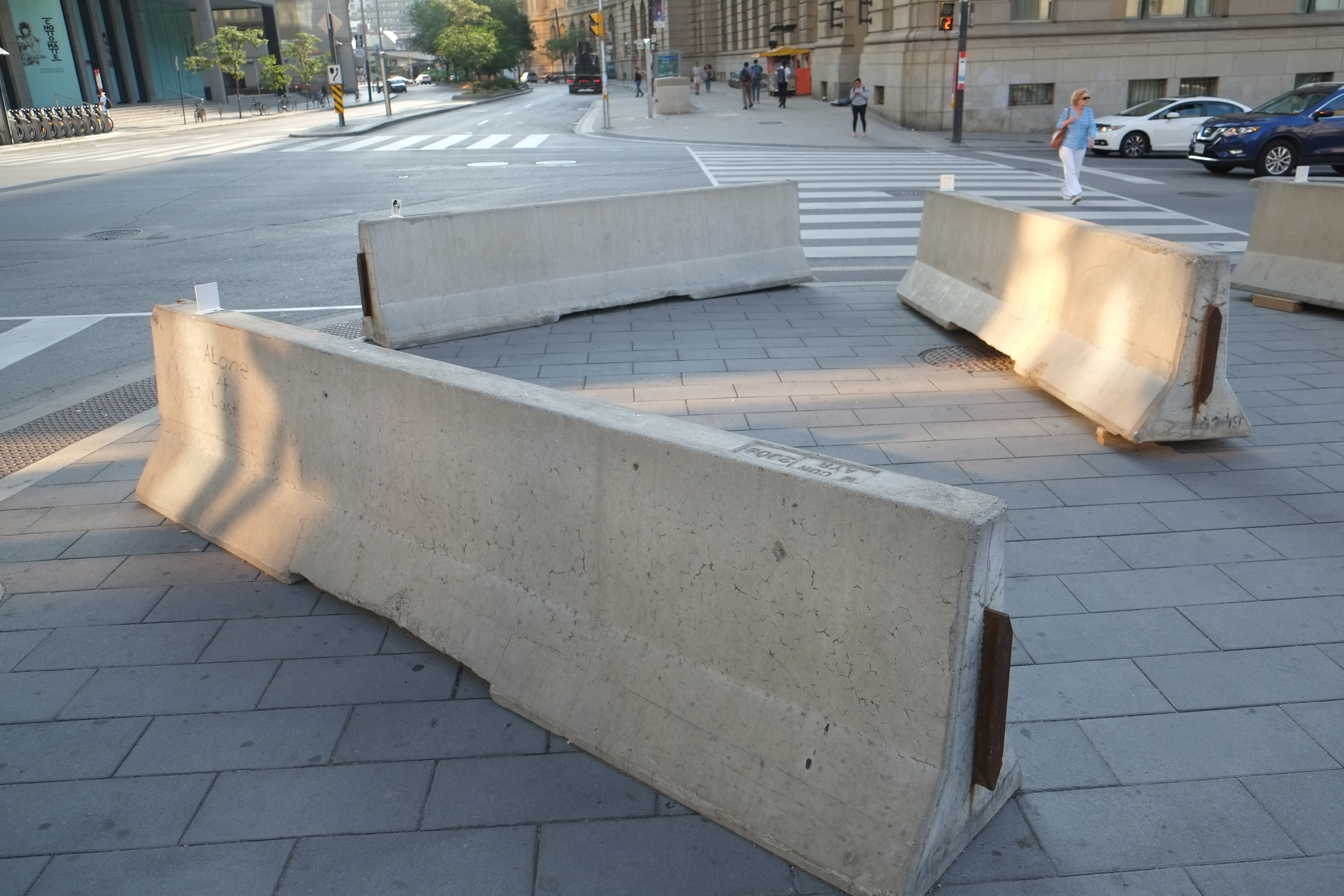 There is no vaccine to stop project opposition