The tech sector is showing that not everything is happening in Toronto’s downtown core.

When Amazon selected Toronto as one of the 20 finalists for its new headquarters in 2018, the reputation of the city as a budding tech hub became clear. Suddenly, industry giants like Apple, Google, LinkedIn and Microsoft began setting up shop, further strengthening the city’s global appeal. By early 2019, the Greater Toronto Area (GTA) had been ranked North America’s fourth-largest tech talent market, surpassing well-known leaders like San Francisco, Washington, D.C. and Seattle. In a single year, Toronto had hit the map.

Though well on its way to fame prior to Amazon’s interest, the city benefited immensely from this international exposure. Today, it thrives as a top attraction for tech talent, boasting approximately 241,000 current workers, and a new mass moving quickly down the pipeline (thanks to leading academic institutions with specialized training). From software engineering and artificial intelligence to cybersecurity and data science and analytics, the city’s information and communications technology (ICT) sector is alive and well.

Not all tech businesses are located in Toronto proper, however; in fact, a new report from Avison Young titled The Technology Sector in the Greater Toronto Area: A Multi-Market Success Story, explores the increasing draw towards the city’s suburbs, and dives deep into the distribution of ICT businesses across the city’s suburban 905 regions – an impressive 62 per cent, according to Statistics Canada, which accounts for thousands of ICT firms at all stages of growth.

“There’s this notion that tech companies are only congregating in downtown Toronto,” says Bill Argeropoulos, principal and practice leader, Research (Canada) at Avison Young. “There is much more to the story than the popular conception of fast-growing downtown start-ups that capture today’s headlines. We found that there is a critical mass of firms located well outside the downtown core which have equally impressive growth potential and are thriving in suburban areas.”

The reasons behind ICT sprawl are multifold. Not surprisingly, real estate affordability is a driving factor. More than that, though, these tech companies are chasing a variety in office product and talent. With considerable flex space and a good mix of lease options at their disposal, the suburbs can accommodate ICT firms of any size, from start-ups and scale-ups to international giants and those on the fast-track to success.

Likewise, whereas ICT experts traditionally worried about losing talent to competitive foreign markets, Avison Young says the presence of tech workers across the GTA is currently strong. “Companies sometimes have difficulty finding the right talent for the jobs they need done,” the report states. “It is worth noting, however, where experienced and qualified ICT professionals live and work today, or more specifically, where those with the kind of technical skills that will be most in demand are to be found. In both cases, the answer shows significant distribution across the entire GTA.”

Quality of life and personal affordability play a huge role in the location of tech workers, with housing options in the downtown core accurately described in the report as “prohibitive.” Luckily, expanding transit lines linking key hubs across the GTA make living and working outside of the city centre easier than ever. The York Region in particular has been identified as a tech hotspot, boasting “the highest concentration of ICT companies per population size in Canada,” as well as “the country’s second-largest ICT cluster overall.” With nearly 4,400 ICT firms in its vicinity — including Vaughan’s Daisy Intelligence, Richmond Hill’s Compugen and Markham’s General Motors campus — York Region offers competitive rental rates, affordable housing options, and above-average transit connections.

Argeropoulos says it’s also worth noting that of the 10 proposed GTA sites for the Amazon headquarters, nine were located outside of downtown Toronto, including the York Region itself. “These days, smart companies look beyond Silicon Valley,” he says. “Because the GTA is not a single market, but offers tech companies a wide range of real estate options and skilled labour pools, there’s opportunity here, and companies can, and will, continue to thrive.”

Despite the appeal of the suburbs, however, the downtown core continues to attract talent. Many firms, both established and new, are drawn to the potential that accompanies proximity to the city centre; and while vacancy rates currently sit at a record 1.1 per cent, many companies are finding innovative solutions to secure commercial space.

This is especially true for young firms. “Tech startups are increasingly looking for alternative office options as they contend with a near zero per cent vacancy market in the GTA,” says Daniel Holmes, senior managing director, Office Practice Group, Colliers International. “It may not align with a tech startup’s financial priorities to allocate their funding into long-term leases in high-demand areas, so some are opting for co-working offerings that provide flexibility, minimal set-up costs, and a collaborative and dynamic environment.” 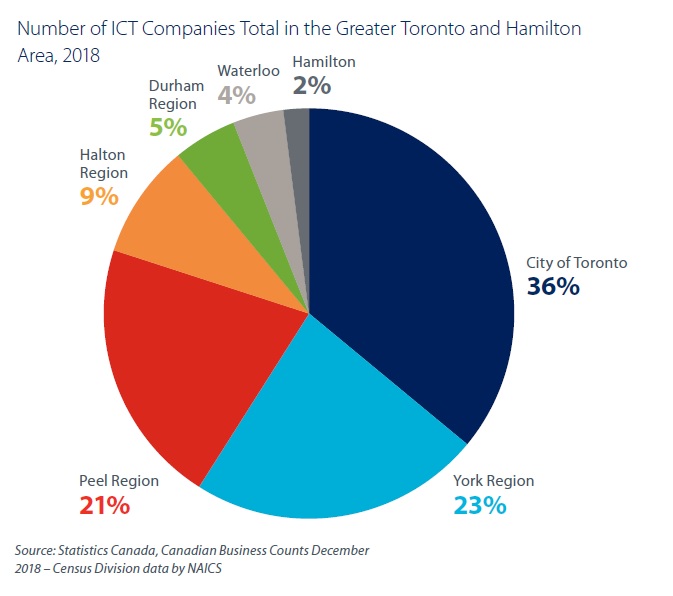 Colliers’ report, Young tech firms: Flexibility requirements in a near zero vacancy market, narrows in on this trend. According to their findings, the top five players in Toronto’s co-working market — Regus/Spaces, WeWork, Workplace One, Workhaus, and IQ Office Suites — accounted for 1.4 million square feet of commercial space by 2018 year-end. “The majority of these co-working options are located in the Financial Core and Downtown West submarkets, home to the market’s largest concentration of tech tenants,” the report says. Not surprisingly, startups are drawn to these well-located spaces.

But supply is drying up, and according to Colliers, many companies face further constraints by struggling to secure the right talent. To address this, the Government of Canada established a Global Skills Strategy program that allows quick approval for temporary worker applications. Colliers found that nearly 22,000 work permit applications were approved between June 2017 and September 2018, of which 4,233 were processed for the City of Toronto alone. “The growth of the program has helped address the shortage of highly skilled workers and allow tech tenants to access talent which enables them to grow their company,” the report says.

Colliers also acknowledges the inevitable shift towards the suburbs in the face of a strained real estate landscape. Breaking down total market penetration, the report reveals more than 18.7 million square feet of occupied tech space across the GTA, accounting for 9.4 per cent of the region’s overall office inventory. Going forward, as vacancy rates inch even closer to zero per cent, Colliers predicts an increased demand for co-working space and a continued shift away from downtown.

Statistics, talent distribution and commercial availability aside, the GTA’s tech sector is thriving; and to prosper even further, Avison Young concludes that suburbanites and city dwellers must learn to co-exist as one. “Currently, there is a tendency to view the GTA’s downtown and suburban regions as being in competition with each other,” says Argeropoulos. “However, the GTA and its ICT sector should be considered more holistically if the region’s tech sector is to retain its talent, support its enterprises and serve the public good.”