The Delicate Art of Heritage Construction

How Chandos Construction is taking a systemic approach to upholding the soul of a heritage property.

Imagine having to reconstruct a building that is a designated heritage property. Having to carefully salvage thousands of 100-year-old bricks, and then reapply them the way a mason would have a century ago. Think about the amount of care that would need to go into handling and preserving the precarious state of a structure that bears the weight of history, and the stories that have played out within its walls.

It’s not common to use the words ‘delicate’ and ‘construction’ in the same sentence but that’s exactly what’s required on heritage projects. There are many details to consider and a meticulous process to follow. The task can be strenuous, but care and an understanding of the building’s significance are crucial. Because, it’s not just the actual structure that’s being salvaged, it’s its influence and impact on communities past, present and future.

During his work on the Molson Tower, a heritage structure in Edmonton built in 1913, Andrew Murphy, project manager at Chandos Construction and his team set out an overall plan and analysis before work on the building even began.

“Planning and assessment of a heritage project can sometimes take as long as one year,” Murphy said. “But, it’s important to do. Before we remove a single brick, we have to come up with and agree on the best procedure that would have the least amount of impact on the original structure.”

“For Molson, we did a laser scan of all the areas in need of repair and upgrades; we did a hazardous material assessment; investigated of the building’s integrity; evaluated the wall thickness, foundation and structural steel; tested sand blasting, walnut shell blasting, chemical removal, and glass bead blasting; and developed a strategy for salvaging materials,” he added.

The team also involved key trades early in the planning process and met with a heritage consultant to ensure they followed the correct protocols that would preserve the building’s integrity. “I have worked on heritage projects before and there are numerous challenges,” said Murphy. “But it’s very satisfying. People value each other’s opinions.”

“There’s great collaboration because we’re all driven by the fact that these types of buildings have a more sentimental meaning. Our aim is to keep it intact, and in a sense, keep its memories alive.”

According to David Johnston, principal heritage planner for the City of Edmonton, a heritage building is “any structure that provides a direct connection to the past, its people and the community.” Kaitlin Wainwright, director of programming for the City of Toronto has a similar definition: that a heritage building represents a shared history. These structures can be in the form of courthouses and jails; monuments and cemeteries; historic gardens and forts; provincial parks and cultural landscapes; bridges, museums and historic houses.

“Heritage properties contribute to an overall sense of place and community,” Wainwright said. “Their preservation can foster civic identity and pride, and is an important aspect of cultural planning.”

So, if heritage structures are a link to our past, then their conservation is key to maintaining our history and helping future generations understand the culture, identity and meaning of their communities.

Heritage BC, a charitable society focused on heritage conservation, said that the purpose of designation is to protect heritage buildings from scenarios like “unsympathetic alteration and [demolishing] that cause subsequent loss of character or value.” Designation can also help protect from “unsympathetic construction or excavation.” Though certain alterations may be needed to upkeep a building’s structure and functionality, these cases need to be dealt with in a proper manner.

When Yvette Young, estimating manager, Chandos Construction, began working on a new condominium project in Toronto’s historic Danforth district, her team was in constant contact with the City of Toronto to stay in line with its recommendations and policies, all while providing a viable proposition for development.

Because a section of the condo complex would be built around one of three remaining carriage houses in Ontario, it proved that the structure was worth keeping and preserving.

“As this was deemed of significant historical interest, thorough investigations needed to be undertaken,” Young said. “We engaged with a historical consultant to investigate the building’s heritage and the impact it had on the area. We also worked with the architect to look at the future designs and align them with the existing structure. And, we collaborated with a structural engineer to investigate the best and most effective options that would keep the building intact.” 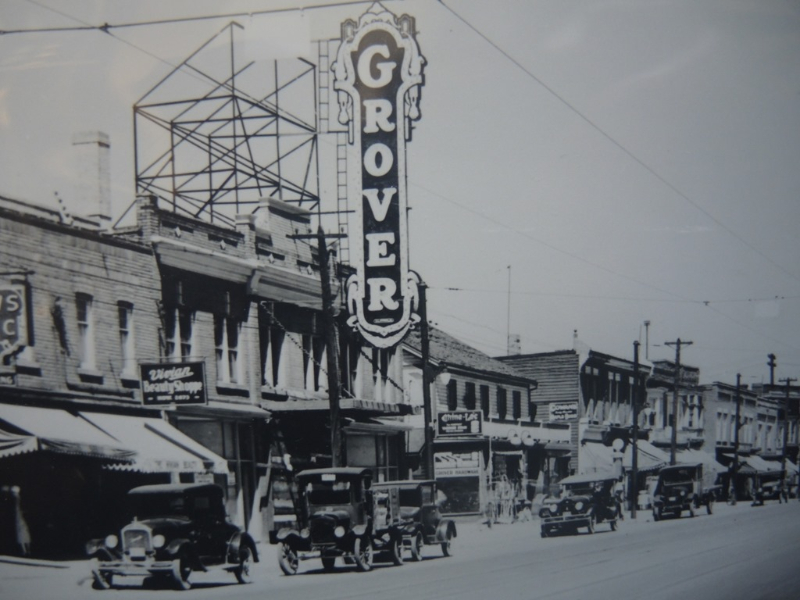 “We believe that preserving the history and adapting to the structural needs of a heritage building are vital to safeguarding the heart of our communities,” said Murphy. “We have a long history of working on some of the country’s most prized heritage structures including the Queen Elizabeth II Planetarium, the Alberta Land Titles Building and the Molson Tower in Edmonton’s Brewery District, as mentioned.”

After a series of acquisitions, the Molson Tower was finally taken over by First Capital Realty. The firm asked Chandos to undertake a heritage restoration and turn the century-old building into a microbrewery, restaurant and office space. The project involved the replacement of all floors and a on-by-one removal of all the beams pocketed into the bearings. In addition, the mechanical and electrical systems needed to be upgraded; and a complete restoration of the interior and exterior masonry was needed – this scope of work required custom manufacturing of cornices. The team was also tasked with: saving the windows and restoring them to their original condition; constructing a new basement and elevator in the bowls of the building; restoring the existing brick and stone features; and adding an additional level.

Murphy recalled that what was unique about the Molson project was that it used cast iron columns for structural support. This meant that the design criteria had to be carefully assessed in order to meet correct capacity requirements.

“Just like there was so much analysis required, there was a lot of care required too,” Murphy said. “It was painstaking having to remove the original mosaic tile from the building one-by-one and re-constructing it by following the original design. Another challenge was having to cut the elevator door through the existing foundation while preserving the integrity. All these nuances make the work strenuous, but it needed to be done accurately. And following through on these details help preserve the deeper meaning of a structure.”

For the eight-storey, u-shaped Calgary Public Building, built in 1931, Chandos’ project manager Benny Cheung said that it too was challenging to navigate. There were several items to keep track of such as the logistics of working on a project located in the city’s downtown core; maintaining the building’s limestone and sandstone cladding; preserving its high ceiling lobby with marble flooring, bronze lights and brass doors; and protecting its two elevators with brass sliding gates – the only man-operated elevators remaining in use in North America.

“We basically had to build a new building inside of an existing building,” said Cheung. “The renovation included extreme interior upgrades as well as the gutting of all the mechanical and electrical systems. We did it floor by floor from basement to the roof in order to allow for continuous occupation and operation.”

Cheung said that construction had to meet the highest-performance energy specifications in order to extend the life of the building, and to reduce the energy consumption and greenhouse emissions by 50 per cent. Upon completion, the Calgary Public Building was awarded one of the highest certifications by the Canada Green Building Council: LEED Platinum status. This is a considerable accomplishment especially for a heritage project.

“The focus for us was always based on reusing, restoring and preserving,” said Cheung. Johnston agreed that “restoring” should be the focal point when working on a heritage project. “Then we can talk about adding new materials,” he added. “Whereas sometimes, the opposite approach is taken.”

Johnston suggested that instead of rushing to insulate a heritage building for example – which can often be detrimental to the historic fabric – construction and design teams can think about other solutions – such as how to make windows efficient.

“Instead of completely replacing them, we can add storm window installation, duct tailing, remove putty for better sealing, cut away sections of rotten wood, and add weather stripping,” he said. “There needs to be an awareness that there will be design compromises when dealing with historic structures. Their preservation should always be the driving force.”

That’s how Cheung’s team approached their work on the Calgary Public Building. They began by first understanding the historic significance and cultural value of the structure. Then they evaluated the scope of the work required and started to build an experienced team. They investigated existing conditions, identified restrains and challenges, documented the findings, and lastly, prepared a schedule, cost estimate and budget.

Marc Boutin was the principal architect on the project. He said that work centering around a heritage building adds “an additional layer of complexity.” This complexity stays throughout – during procedures, approvals, research, documentation, and material and design considerations.

“There are opportunities and challenges that come up when leveraging the heritage building into its new life,” said Boutin. “For us, the key in working with a heritage resource is to authentically connect with its past while functionally connecting with potentially new uses. And, effectively communicating the evolution of the building so that the different eras of its life are clear and readable.”

There is a burgeoning movement to protect heritage sites. According to Wainwright, Toronto is a “real leader in terms of adaptive reuse.”

“Building owners are looking at the future needs of the area,” she said. “One of our 2019 award winners – 150 Symes Road – is now home to Junction Craft Brewing and is a beloved neighbourhood hub and event space. Another nominee – 158 Sterling Road – has the Museum of Contemporary Art (MOCA) as its anchor tenant. On the residential side, there is a lot of high-quality craftsmanship work happening which is led by some exceptional contractors in the region.”

Edmonton, which has been known to demolish its historic properties to make space for new developments, is taking a stand on preservation.

“We go through ‘boom and bust cycles’ much quickly than other cities,” said Johnston. “When there is a lot of money and good economic times, we build in a frenzy and old buildings are demolished because their location is advantageous for new developments.”

Johnston said that because of that, Edmonton doesn’t have many original buildings in stock that are older than 100 years. But there is a resurgence. The city currently has 158 formally protected buildings and 1,000 buildings on inventory of historic resources – its National Trust received the Prince of Wales award for restoration. Edmonton has also provided up to $2.3 million in grants to owners for rehabilitation, and a lot of retailers and developers are seeking to maintain the integrity of the buildings they purchase.

The public and local governments are also making a push and setting laws that will help honour, upkeep and protect the structures and landscapes considered to be the cultural and historic heartbeat of communities.

“What is a community without its heritage?” Wainwright said. “Heritage properties are a touchstone for neighbourhoods and their residents. They are sites that represent or reflect cultural heritage. In addition to creating social cohesion, heritage properties are also found to be drivers of economic development and contribute to a more sustainable urban environment.”

If companies want net-zero carbon offices, they need to focus on building materials