In February 2016, Natural Resources Canada (NRCan) published a discussion paper on behalf of the federal, provincial and territorial Building Environment and Equipment Working Group (BEEWG) aimed at advancing the understanding and creation of energy-conscious buildings in Canada.

Titled High-Performance Commercial and Institutional Building Design Metrics, the paper calls on industry stakeholders—including architects, designers, constructors and building owners—to provide feedback on comparative metrics that could potentially be used to identify and promote buildings on the path towards a net-zero energy ideal.

Using an overview and analysis of both existing and new metrics, the discussion paper aims to inspire a shift towards improved building standards in Canada.“The world is moving towards net-zero energy, but Canada is falling behind,” says Marie Lyne Tremblay, Deputy Director of the Buildings and Industry Division at the NRCan’ s Office of Energy Efficiency. “The goal of this consultation is to encourage a public discussion on how to achieve and improve high-energy performance in Canadian designs.”

The report begins by establishing a context for the need and significance of comparative metrics. According to the 2009 Survey of Commercial and Institutional Energy Use, there are approximately 482,000 commercial and institutional buildings in Canada; and in 2010, “these facilities were responsible for 12 per cent of our nation’ s energy consumption and 11 per cent of our total carbon emissions.” Clearly, the building sector has a significant impact on energy use, and the reasons for reducing and controlling levels are apparent and understood across the globe (think climate change, greenhouse gas emissions and fossil fuels). Ultimately, building to higher energy-efficiency standards needs to be a common goal, as “new buildings present a very real opportunity to substantially avoid energy consumption over the long term, especially when designers, builders and operators use an integrated system approach to energy efficiency.”

In Canada, several codes and standards exist to ensure a minimum acceptable energy performance in the construction of new buildings — but market leaders are aiming for more. Energy-neutral or net-zero buildings present the ultimate ideal, producing as much renewable energy as they consume over a 12-month period. Unfortunately, few net-zero buildings exist in North America; and while some have come close to achieving the ideal, it can be difficult to track and improve their efficiency levels. What’ s more, gaps often exist between the design of a building and its resulting performance. “Before a building is constructed, all that we have to assess its efficiency are specs on paper,” says Tremblay. “It’ s important to understand that design is not everything. Performance after construction is the ultimate objective.”

Certain metrics are needed in order for the market to compare buildings and determine their progress towards achieving net-zero energy. But what metrics work best? How can stakeholders determine what designs will yield the best performance, and how can they come closer to achieving the ideal? Such questions inspired the NRCan to launch their study and to evaluate new and existing metrics for consideration among stakeholders. “One of the objectives of the consultation is to present options and see how the market reacts to them,” says Tremblay. “It’ s not about establishing one standard, but about putting together variables and factors that should be taken into account when considering the performance of a new building design.” 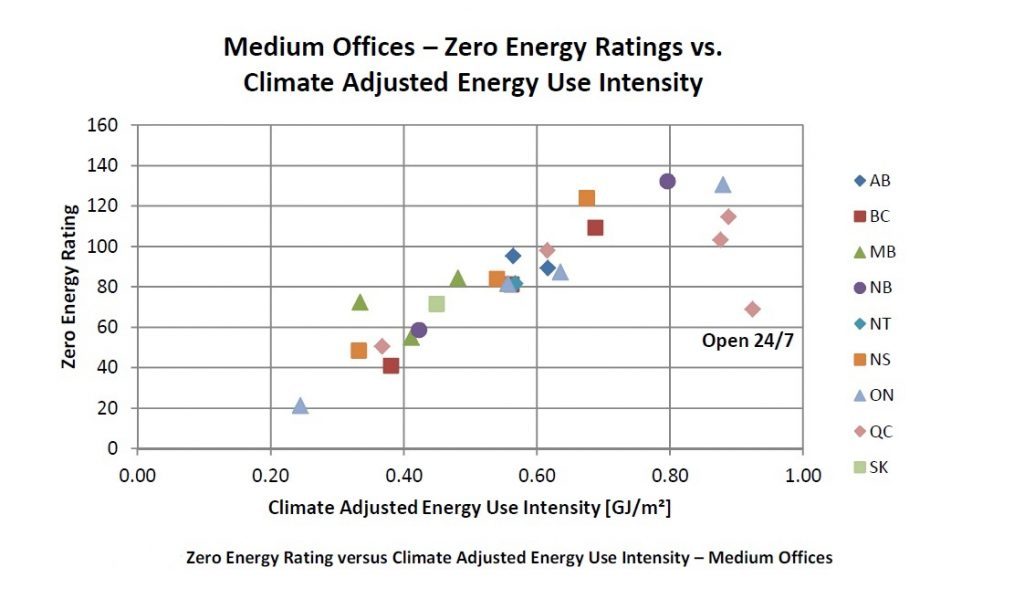 According to the study, the most common metric is the calculation of the amount of energy consumed over a one-year period divided by the floorspace of a building, yielding the energy use intensity (EUI) of a structure. If the result is zero, the building has achieved the ultimate ideal. However, the equation almost never generates this result. “The lowest EUIs represent the most energy-efficient designs,” says the report, but “while logical in theory, this simple measure does not capture the complex realities of building design, in which a given building may have genuinely credible reasons for operating at a higher EUI.”

The first metric measures a building’ s predicted EUI adjusted to its local climate. The formula assumes that 50 per cent of a building’ s energy is used for heating, and is proportional to the number of heating days demanded by the building’ s surrounding climate. But stakeholders be warned: this formula will not generate fair results when used to compare buildings that operate under different hours or those that have a varying number of occupants.

The second metric uses a rating system to evaluate the comparative performance of existing buildings. A building’s normalized EUI (adjusted for climate, occupancy, etc.) is measured against a national building energy use database—in Canada’s case, the 2009 Survey of Commercial and Institutional Energy Use. The result helps to identify structures that exceed the performance of the best existing buildings, thus revealing the extent of their progress towards achieving the ideal.

The third existing metric provides an estimation of a building’ s expected energy consumption based on various external factors (including location and equipment specifications). The result is converted into a score between one and 10, revealing the building’s energy performance based on its type (office, school, etc.) and use of current technologies (without accounting for on-site renewables).

The last existing metric that can be used to measure a building’ s performance “involves the modeling of the proposed building in comparison to a similar‘ reference’ building,” says the report. The reference building is a structure that meets the minimum requirements set out by an energy code or standard, and is used as a basis from which to measure the comparative performance of a second design.

While these existing metrics can help to weed out efficient and progressive designs from their consumptive counterparts, no metric is ideal. All contain uncertainties, and for this reason, the NRCan developed three new metrics for consideration in their study. “We researched the existing metrics and felt that there were significant gaps and weaknesses in them all, so we decided to see if we could develop other options ourselves,” says Tremblay. “We need to work with experts and consultants to develop original and innovative ideas.”

This first approach was inspired by the existing Minimum Code metric, but instead assesses a building’ s performance in relation to how close its design approaches a specified high-performance level. This comparison “maintains fairness by taking into account the special constraints of each building,” the report says. The goal of this approach is to determine how much a design can personally benefit from certain high-performance characteristics.

This metric aims to assess a building’ s efficiency by comparing it to high-performance archetypes established by the NRCan, using a formula that generates a Zero Energy Rating (ZER). According to the report, “The ZER is based on two considerations: i) whether the proposed building is using more or less energy than an appropriate archetype; and ii) how much the efficiency of the proposed building would increase with the inclusion of high-performance characteristics.” The result generates a dataset which can be used to compare energy performance in buildings.

The last metric established by the NRCan aims to build on the previous metric. Using data obtained from the archetype, the metric questions if the ZER is more or less effective when referencing a standard or code, as opposed to a high-performance baseline. When test buildings’ ratings were plotted against their EUIs (as in the chart, opposite), the resulting correlations (for both offices and schools) were far stronger than with the above metric options.

As NRCan struggles to determine which building design metric functions best, their study calls upon stakeholders to provide their input and expertise. “We aren’ t presenting any of these metrics as the best solution, but are simply sharing them with a group of industry experts in order to obtain their views and opinions on them,” says Ian Meredith, Program Development Officer of the Buildings and Industry Division at NRCan’ s Office of Energy Efficiency. “Our end goal is to find a metric that fairly compares different designs in order to determine their individual performance levels.”

The report claims that the most appropriate metric should be clear and understandable to a wide range of building sector stakeholders; be transparent, credible and defensible; provide the basis for a subsequent communication tool; and be cost effective for all parties using it. Suggested points for the stakeholders to consider in their feedback include: potential advantages and disadvantages to the building market that would result from the creation and implementation of a single high-performance design metric; identification of the primary characteristics required by a high-performance metric in order to be effective; comparison of the advantages and disadvantages of the seven metrics (including impacts on the building market); and more.

To date, the response has been positive. “There’ s a high degree of interest in the building industry for high-performance buildings,” says Tremblay. “That has been communicated to us through the input that we have received. People understand what is at stake here, and there is interest from all levels of the industry.”

NRCan is currently preparing a report that will be sent to participants based on the feedback received from their discussion paper. They will be also be launching a challenge to support the building sector’ s move towards net-zero energy performance. The National High Performance Building Challenge will aim to entice proposals from stakeholders that emulate the principles of net-zero design. “The objective is to receive proposals and to share the ones that are best on their way towards achieving the ideal,” says Tremblay.

NRCan hopes to undertake the project with the support of industry associations and/or organizations. “The goal of the National High Performance Building Challenge is to establish designs that are reproducible. Designs that anybody in the market can replicate, if they want to,”says Meredith. “If we can capture that nuance in this challenge, I think we will have done the market a tremendous amount of good.”

Clearly, it is from NRCan’ s various efforts that the building sector moves slowly but surely towards improved energy-efficiency in Canadian construction and design.

A Blueprint for B.C. and Beyond