Property tax is the main source of revenue for Canadian municipalities and is used to fund services such as education, public transit, road repair and recreational programs. While every homeowner would naturally appreciate paying less property tax, it is important to balance the burden paid by businesses in each city. However, high commercial property taxes place a greater weight on businesses to contribute a disproportionate share of municipal budgets. 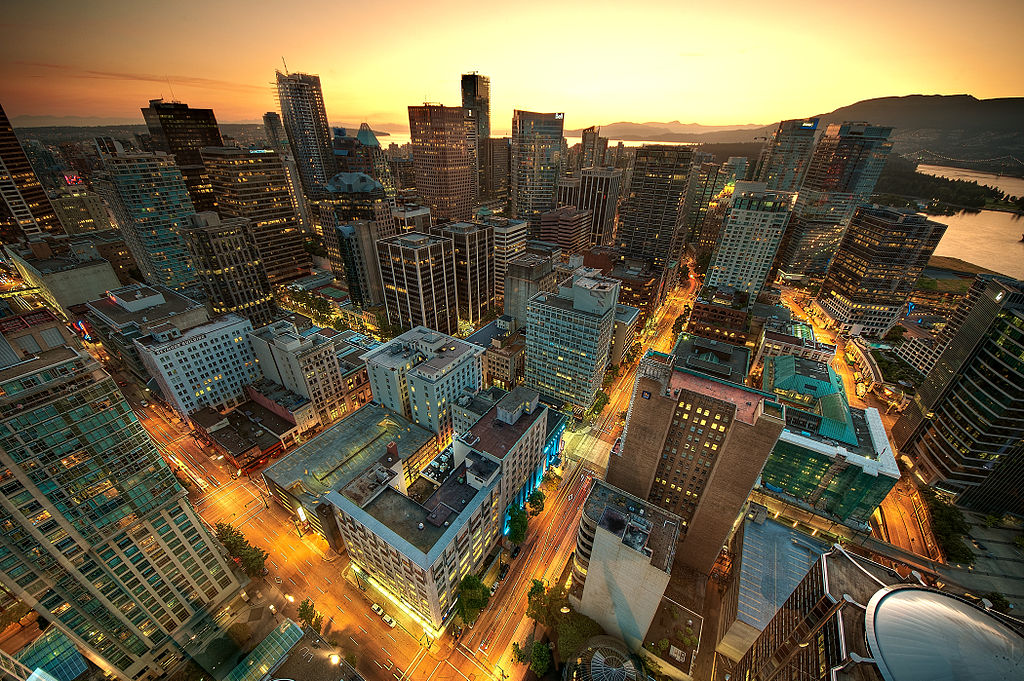 For the past 15 years, Altus Group has analyzed property tax rates of major urban centres across Canada with the annual Canadian Property Tax Rate Benchmark Report in partnership with REALPAC. The report compares the commercial and residential tax rates, which are set at the discretion of taxing authorities. Examining the commercial-to-residential tax ratio helps open a dialogue about tax fairness by highlighting disproportionately high taxes paid by commercial property owners compared to residential property owners in an effort to promote a healthy business environment in the real estate sector. 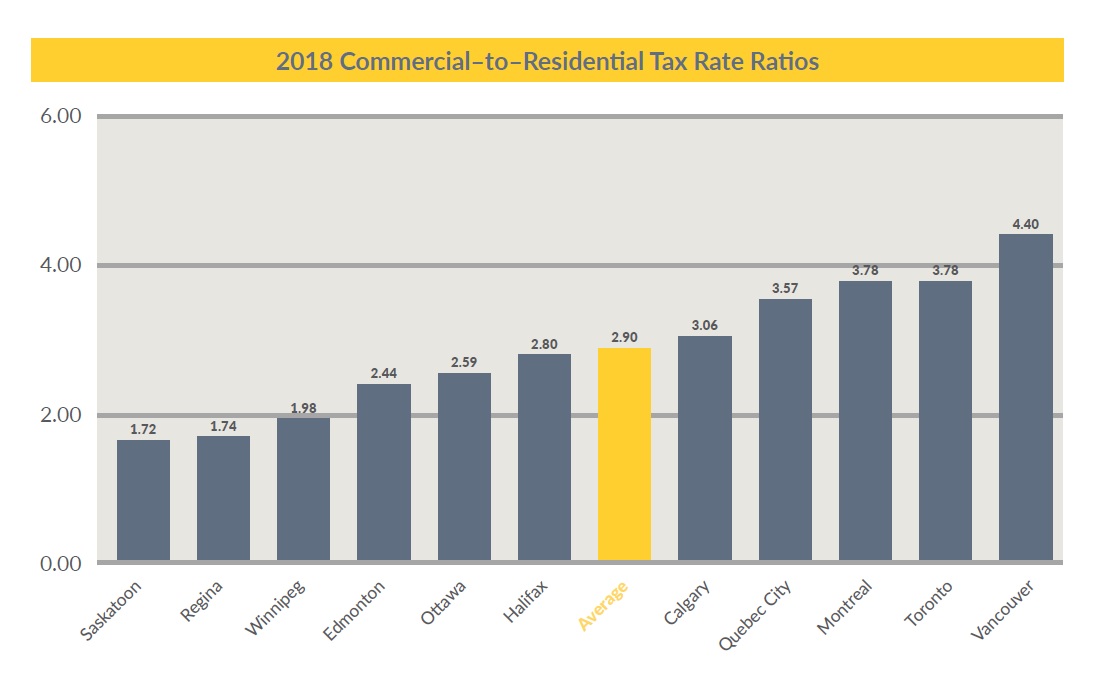 This year’s report revealed that in 7 out of 11 cities surveyed, commercial tax rates are at least 2.5 times greater than residential tax rates. The average commercial-to-residential tax ratio for all municipalities surveyed was 2.90, meaning that overall, Canadian commercial property owners are paying almost three times as much in taxes compared to residential property owners. For the eleventh consecutive year, Vancouver, Toronto and Montréal posted the highest commercial-to-residential ratios in the country. However, the most notable trends this year were in Calgary and Québec City. Both cities saw the highest ratio increases in 2018, indicating a growing burden on commercial rate payers in these cities.

For the first time in 14 years, Calgary ranks above the average ratio with a jump of almost 10 per cent (9.48 per cent) from last year, pushing the ratio to 3.06. As the downtown office market continues to struggle with high vacancy, the commercial assessment base has dropped causing the commercial tax rate to rise at a somewhat alarming rate. 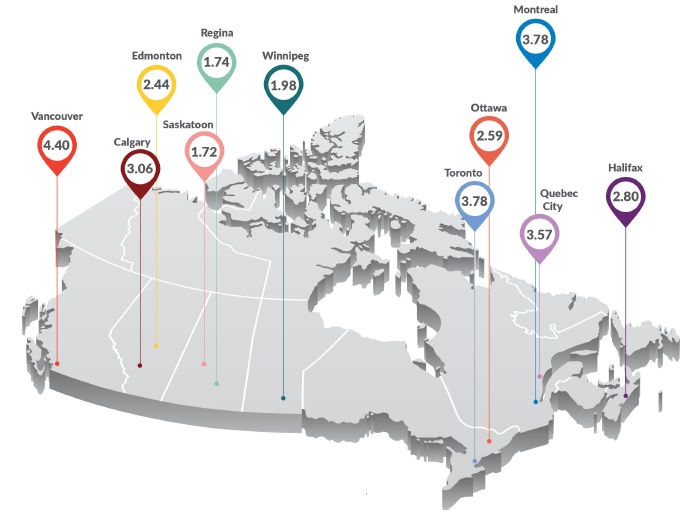 There are three main factors impacting the city’s tax environment: the last piece of the Business Tax phase-out is transferring to commercial property tax in 2019; with the downtown office market still feeling the effects of Alberta’s 2014 economic downturn, downward pressure on the largest commercial assessments has the effect of driving up the tax rate when the municipality collects the same or more tax; and most of the ongoing City of Calgary budgetary increases are being pushed to the commercial tax base, as opposed to the residential tax base.

Calgary has attempted to mitigate these increases with programs such as the Phased Tax Cap Program (PTP), which has capped tax increases at five per cent for the Municipal Tax portion of commercial taxes. Despite these efforts, there aren’t any signs of improvement as it’s anticipated that Calgary is likely in for another commercial tax rate increase in 2019.

Montréal continued to post the highest commercial property tax rate of the cities surveyed (per $1,000 assessment since 2008). Additionally, since 2008, the City of Montréal budget has increased faster than inflation and while non-residential properties assume 56.1 per cent of municipal taxes, they represent only 26.1 per cent of the tax base.

For the 19th consecutive year, Vancouver remains the only city with a commercial-to-residential tax ratio in excess of 4:1, despite posting the largest decrease (-9.72 per cent). Even with the highest commercial-to-residential tax ratio, the region continues to post the lowest commercial and residential tax rates of the cities surveyed. This is largely due to Vancouver’s high property values compared to the other Canadian cities. Vancouver, along with the province of British Columbia, recently ramped up efforts to use local taxation to curtail demand for residential properties in an attempt to slow the increase in pricing.

The city of Vancouver has also announced three new taxes on property assessments: the Empty Homes Tax (1 per cent) which applies to dwellings that are deemed empty; the Speculation Tax Rate (0.5 per cent – 2 per cent) which mirrors the Empty Homes Tax except that it is applied to investors and there are different rates for local residents, Canadian owners outside the province and foreign owners; and the Additional School Tax (up to 0.4 per cent) which comes into effect in 2019 and applies a 0.2 per cent rate on the residential portion assessed between $3 million and $4 million and a 0.4 per cent tax rate on the residential portion assessed over $4 million. These are circumstantial additions to the base residential tax rate, so they do not directly impact the 2018 ratio for Vancouver, however they do produce additional tax revenue for Vancouver.

In 2017, residential tenants were being taxed equally to homeowners (having ideal ratios of 1:1) in all cities surveyed, except for Montréal, Edmonton, Toronto and Ottawa. This year, Montréal improved their ratio to 1:1, however with the addition of Québec City to the 2018 report, there remain four cities where renters are being taxed at higher ratios compared to owner-occupied residential properties: Edmonton, Toronto, Ottawa and Québec City.

Toronto and Ottawa, with ratios of 2.07 and 1.36 respectively, remain extreme outliers though both improved marginally over last year and with the election of the Ontario PC government in June 2018, the outlook on this issue remains in question. The Ontario Liberal government placed a freeze on multi-residential taxes for 2017 while it undertook a review on how to reduce the tax ratio, however it is not yet clear if the new government will act on this issue and implement a significant correction in the multi-residential ratio or choose to continue status quo.

Though we have seen significant shifts in several cities over the last year, the key finding from our annual Property Tax Rate Benchmark Report remains unchanged: several cities across Canada continue to shift the burden of property taxes to business owners. Each municipality is faced with the ongoing challenge of attempting to balance the tax burden while recognizing that bringing down the commercial property tax rate has benefits beyond making their cities more appealing to businesses, as it also helps create jobs and leads to sustainable revenue for the city, which is a win for everyone. There is no question that this can’t happen overnight, but the aim of keeping the conversation going is to influence the dial to move to a more balanced position that will reflect the true needs of cities; a thriving and growing business community where commercial properties are not overburdened by disproportionate property taxes.

Getting Around the Principle of Immunity

Beyond long-term care: The benefits of seniors’ communities that evolve on…