Universities can squeeze out low-income residents in cities like Montréal 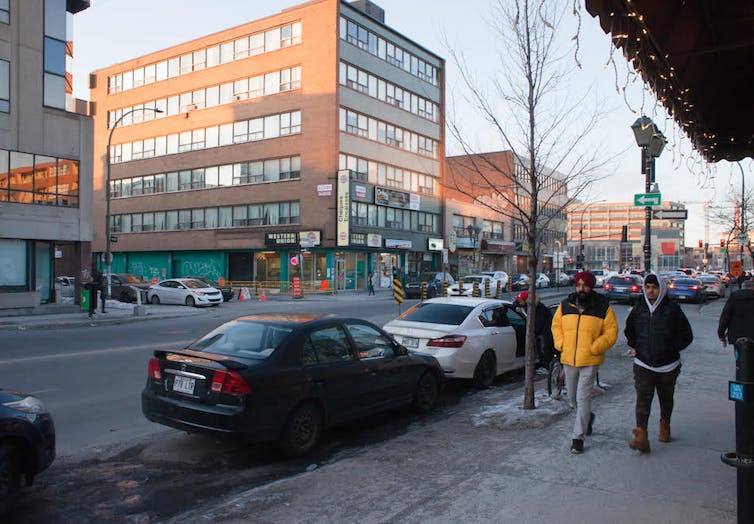 In Montréal, Canada’s second largest city, a new university campus focused on the pursuit of artificial intelligence technology opened last fall to much fanfare. The inauguration of the Université de Montréal’s MIL campus (MIL stands for “middle ground”) also drew critical protests by tenant rights groups impacted by its gleaming presence and its role in the gentrification of surrounding neighbourhoods, particularly Parc-Extension.

Parc-Extension (Parc-Ex) is a neighbourhood that lies to the north of MIL campus and is among Canada’s poorest and most densely populated: 43 per cent of residents live below the poverty line. It is also one of Canada’s most diverse communities, home to the largest immigrant and racialized population of any Montréal neighbourhood.

Landlords are taking advantage of the arrival of new students and employees wishing to live near the campus by evicting residents and increasing rents.

But research shows that the impact of a university on low-income communities need not be detrimental. Universities can leverage their academic, economic and social resources to soften the blow of gentrification. But to do this, they must acknowledge the university’s impact. Universities around the world are putting together inspiring social responsibility projects. Their efforts seek to broaden academia’s role, beyond educating students and producing knowledge.

What happened in Montréal?

The Université de Montréal has, so far, not addressed its negative impact. And it seems they did not plan for it either.

Two reports by the Montréal Public Consultation Office, one from 2007 and the other from 2013, noted the university’s lack of involvement in creating a housing strategy for the surrounding neighbourhoods in its early plans.

The Université de Montréal told the Guardian in 2019 that it was careful to plan for negative impacts the MIL campus may have. The city requires all new residential projects with 200 or more dwellings to set aside 15 per cent of the units as affordable housing and 15 per cent as social housing (this number will soon be 20 per cent per category). But as the Guardian reports, none of the housing is reserved for current Parc-Ex residents.

The new buildings will be ready after most vulnerable people have lost their homes. Also, the definition of affordable housing “consists of units priced at or below the market rate,” which usually leads to rents that are significantly higher than social housing.

In reaction to this tense situation, we have been studying evictions and housing instability in Parc-Extension this past year. We used community-based research methods, which involve a close collaboration between researchers and nonacademic key informants and stakeholders.

So far, we have documented residential dynamics in the neighbourhood. We have seen a rise of residential precarity with many detrimental outcomes for low-income residents lined to forced mobility such as psychological stress and increased material hardship.

Low-income residents struggle to keep up

Universities play an increasingly important role in urban affairs. They invest in city redevelopment, consult on municipal issues and shape policy through research and lobbying.

For example, Columbia University and New York University are the private entities that own the most properties in New York City. The University of Chicago owns one of the largest private police forces in the United States with a jurisdiction that extends to 65,000 residents and a large part of the south side of Chicago.

Universities have been recognized as accelerators of gentrification. The development of new university campuses often leads neighbourhoods with little previous investment by the government or developers to be coveted by real estate promoters and a wealthier class.

Low-income residents cannot keep up with the rising rents and they are most often forcibly displaced.

Examples of this include the University of Southern California, University of Pennsylvania, Temple University and Columbia University — all institutions that contributed to the displacement of low-income residents and their communities in surrounding neighbourhoods: South Central Los Angeles, West and North Philadelphia, West Harlem.

Gentrification leads to various displacement pressures for low-income residents including evictions, the displacement of neighbourhood resources, changing neighbourhood services and an increasing “out-of-placeness” for existing residents. If genuine residential social mix is to be achieved, it requires a special attention to longtime residents’ needs in historically under-resourced neighbourhoods.

To recognize its own responsibility to society, universities can encourage their students’ community involvement in concert with needs defined by low-income communities.

One inspiring example is a project led by Swarthmore College in North Philadelphia. Environmental studies professor Giovanna Di Chiro, together with community activists and residents, created Serenity Soular, a solar energy cooperative owned by local workers and contributing to the goal of sustainability for surrounding communities.

Occidental College in Los Angeles has started a neighbourhood partnership program where 100 students help local youth with tutoring and workshops each year. A community benefit agreement was developed with neighbouring communities to define its guiding principles and goals. The NU|ACES program at Northeastern University’s Center of Community Service helps student engage with the surrounding Boston community.

In Montréal, too, other universities are leading the way. Concordia University’s Office of Community Engagement applies the university’s commitments to community-campus reciprocity through a wide range of innovative activities. Crucially, the Concordia Student Union (CSU) invested $1.8 million in a student housing project as part of a broader anti-gentrification strategy.

There are inter-university networks across North America dedicated to social responsibility: The Anchor Dashboard Learning Cohort works to “to mutually benefit the long-term well-being” of the campus and the community, and the University Social Responsibility Network (USRN) integrates social responsibility into institutional management, teaching and research.

These examples show that an expansion of universities’ activities beyond their traditional role is not only feasible, but increasingly perceived as necessary.

An open letter written by academics and community activists based in Parc-Ex argues for the need for MIL campus to implement a robust campus-community strategy and to hold a genuine dialogue between the university and the community to mitigate its impact on low-income residents.

If the Université de Montréal continues to fail to work together with surrounding communities they will continue to be responsible for the displacement of many of the city’s most vulnerable residents. These are communities who rely on affordable housing, viable public transportation to get to work, historical sites of prayer and essential community services based in Parc-Extension.

This article is republished from The Conversation under a Creative Commons license. Read the original article.

COVID-19 has created more cyclists: How cities can keep them on their bikes