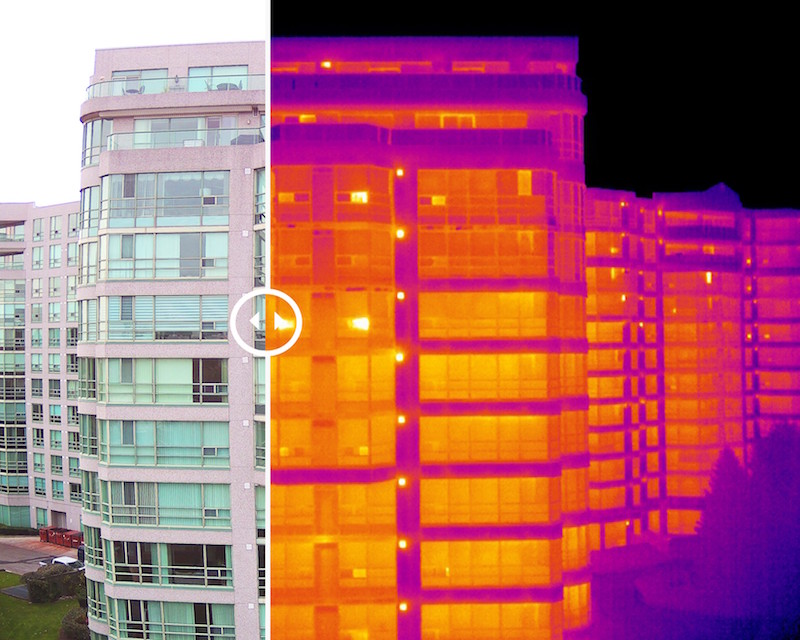 In the past, energy management initiatives related to buildings often focused on the building’s HVAC and lighting systems, but a study by Energy Star found that up to 51 per cent of the energy loss in a building can be caused by envelope failures – faults related to the outer ‘skin’ that protects the building’s interior from the elements and that prevents moisture and heat transfer. The integrity of the building envelope is essential! Heating or cooling energy can be lost as a result of such things as missing or damaged insulation in walls, leaked insulating gas in two-pane glass windows, or structural cracks in the exterior. Some of these envelope failures are visible, some are not.

Especially when resources are scarce, pinpointing and calculating energy losses is critical. The challenges when trying to identify energy losses in high-rise and multi-unit residential buildings include:

all without inconveniencing building occupants and without using articulating lifts or swing stages. Existing, conventional methods of identifying energy losses may lack precision and do not lend themselves to targeted solutions based on actionable data.

Today these challenges are being addressed through the use of autonomous, unmanned air vehicles – UAVs (better known as drones), equipped with synchronized thermal and visual imaging systems. This is a clean technology that focuses on ways to ‘see’ thermal energy – to visualize thermal ‘signatures’. Hundreds of images may be taken in a comprehensive scan of the entire building’s exterior. These images can then be used to create a profile of each area of the building – from large panoramas, to small, specific locations such as around a window or on the roof where penetrations pose a risk of energy losses.

Such a “catalogue” of images is useful as an ongoing reference: it acts as a benchmark to compare images before and after energy efficiency initiatives have been undertaken. This data is meaningful for ROI and sustainability discussions.

Images, both visual and thermal, reveal a great deal about energy losses – they illustrate both the visible and the unseen faults that need to be addressed.

As is often the case, a visual image does not reveal any cracks in the exterior.

A thermal image, on the other hand, can clearly reveal cracks in the building’s exterior, which no doubt has allowed energy to leak to the outside of the building for some time.

Based on an assumption that these cracks have also acted as a conduit for moisture to penetrate the exterior, more thermal images can be taken immediately after a rainfall. This assumption can then be validated as the moisture intrusion in the follow-up thermal image can clearly illustrate.

Often, building owners pay for repairs to address an assumed, not actual problem. Repairs to the roof, in this scenario will not fix the water leakage problem, which exists in the envelope itself.

Identification of the sources of energy loss is only the first step to problem resolution. What is the cost of these losses? And what are the other impacts of these findings (effects on the integrity of the building structure, the possibility of moisture penetration and therefore growth of mould)? What is the impact on the indoor air quality for building occupants? What is the effect on occupant comfort (cool or hot zones or drafts, for example)?

In order to plan to address these problems, building owners and managers need first to determine all of the impacts and their significance -their human, environmental and financial costs. Only a thorough analysis (using the data to drive decision-making) will result in a comprehensive plan.

The challenge is to make the data collected in the infrared images actionable – to compare the heat signatures attained on the surface of the building with the expected heat signatures based on standard, effective insulation (R-value) of the materials/assemblies involved , as specified in the province’s Building Code. In other words, any heat losses that are greater than what are considered normal should be highlighted for further analysis.

A more detailed review of energy losses can facilitate the prioritizing of them according to their severity. Some may be minor (ones that are to be expected or are not significant enough to warrant further examination). Some losses may seem relatively insignificant at the moment but should be monitored lest they turn from inexpensive repairs into costly component replacements in the future. And some clearly warrant immediate, further investigation if significant energy losses are detected. These losses should take top priority in a plan to use the data collected.

As a result, it was discovered that the insulation in the affected parts of the wall of that building was absent – it had been missing since the building was constructed.

Energy loss remedies can involve huge outlays of money upfront. Knowing the return on investment, however, can make them a great business decision. Even simple fixes that are inexpensive, can generate a payback of less than five years! This next step in the process may pose new challenges: how to determine the costs of energy losses quickly and inexpensively.

The use of drones to identify energy losses has changed the landscape of building inspections for this purpose. The next challenges are: What can be done with this data? Of all the sources of energy losses, which should be addressed first? Which energy management strategies will generate the best return on investment? These are the questions faced by building owners, investors, and property managers alike. Solutions involving artificial intelligence will no doubt define the next evolution of this important process.

Mansour Asrani is a Project Manager at QEA Tech, uses drones to acquire and prioritize visual and thermal images of building exteriors. QEA Tech has developed a patented software which uses artificial intelligence to calculate and quantify energy losses, making the data actionable on a broad scale.

Indigenous communities should dictate how $1 billion infrastructure investment is…